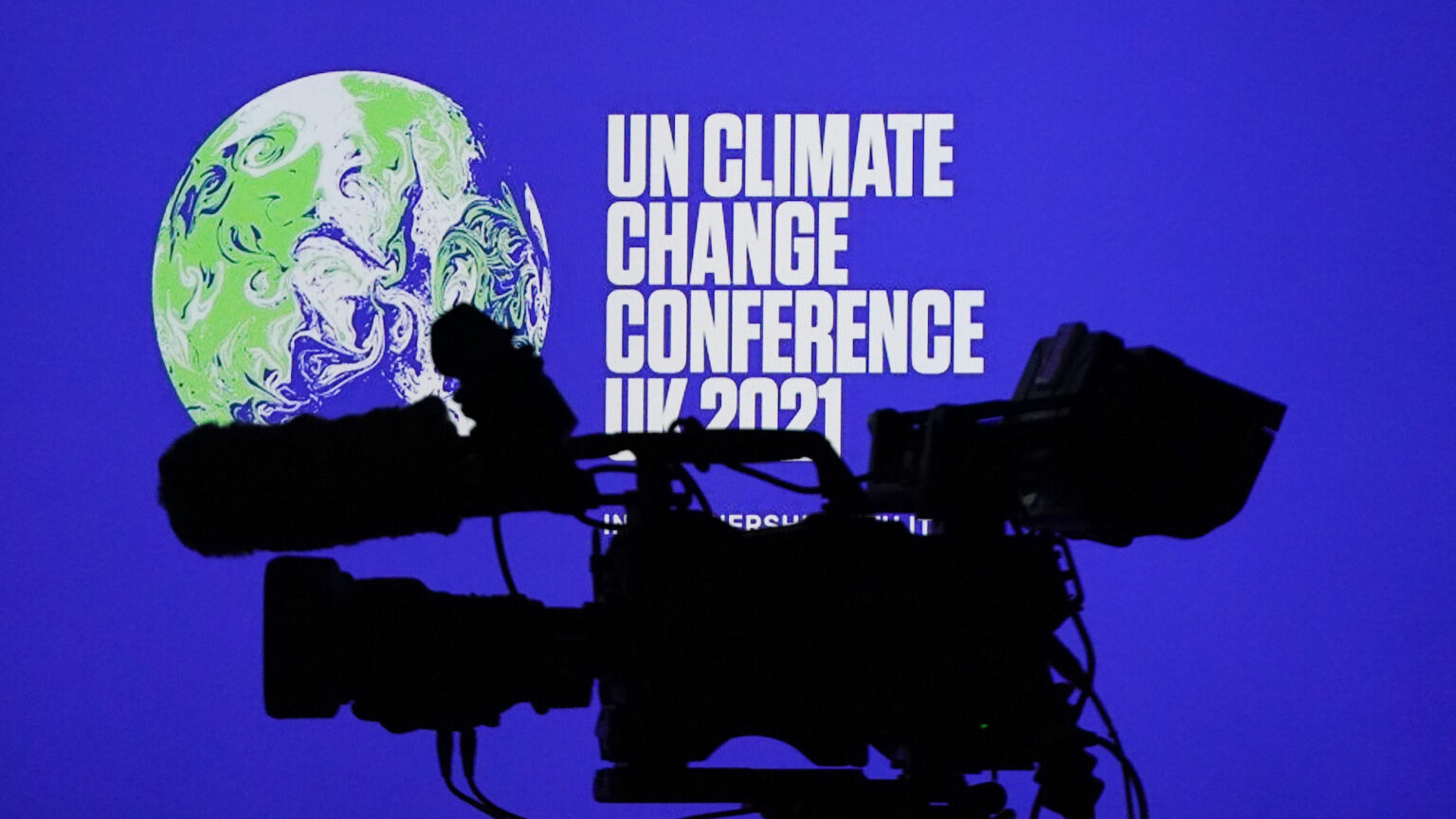 TV news used to be about informing people. Now it’s about manipulating us. Now it’s about socially engineering us to make us more green. Now its ambition is to be a ‘powerful tool of persuasion’ in order to transform viewers from the polluting pests we currently are into the eco-switched-on citizens of the future. At least that’s the conclusion one is forced to draw from the deeply chilling report commissioned by Sky and authored by the Behavioural Insights Team, which is part-owned by the Cabinet Office. Broadcasters must help to change the ‘attitudes and behaviours of citizens’, the report declares. If this brazenly stated, Big Brother-style crusade to reorder the minds of the TV-viewing masses doesn’t have you reaching for the ‘Off’ button on your remote control, I don’t know what will.

The report makes for a disturbing read. Even its title sends a shiver down the spine: The Power of TV: Nudging Viewers to Decarbonise their Lifestyles. ‘Nudge’ is the word behavioural scientists use because they know ‘social engineering’ might prove a tad controversial. ‘We just want to nudge you towards cleaner, healthier ways of living’ sounds better than ‘We want to re-engineer your thoughts and habits to bring them into line with what we consider to be correct moral behaviour’. The politics of nudge has been around for years now, theorised over in books like Nudge by Richard Thaler and Cass Sunstein and promoted as policy by the Royal Academy’s scarily titled discussion group, the Social Brain Project. (George Orwell called – he wants his storyline back.) But this latest report from the ‘nudge unit’, as the Behavioural Insights Team is often aptly referred to, significantly ups the ante in the game of nudge. For here we have an actual mass broadcaster – Sky – putting its name to a proposal to beam the ideology of nudge into TVs up and down the land, in order to reprogramme the populace and subtly encourage us to change our allegedly reckless ways.

The report is unabashed in its insistence that TV broadcasting be bent to the cause of morally improving the masses. It calls on institutions, in particular broadcasters, to ‘curate’ the physical world in such a way that people will be coaxed / cajoled into changing their behaviour. People’s behaviour, it says, is ‘strongly affected by [the] physical and social environment’. Everything from what we see on supermarket shelves to what we watch on TV apparently shapes our brains and determines our behaviour. So the job of nudgers who wish the little people were not so eco-destructive, and perhaps were as socially aware as their betters in professions like policymaking and broadcasting, is to rearrange the ‘physical and social environment’ in such a way that we will be subtly led to make the supposedly right environmental and moral choices. Influential institutions must ‘curate the physical, social and digital world the rest of us occupy’ in a ‘thoughtful and deliberate way’, the report says (my emphasis).

As part of this ‘curation’ of a world that will push people towards supposedly better ways of thinking and behaving, the report says TV broadcasting must allow itself to become a ‘powerful tool of persuasion’. TV must ‘push the frontiers of applied behavioural science’ to encourage ‘sustainable behaviours’. Green behaviour should be promoted across the board in broadcasting, it says – in ‘the actions of [fictional] characters; the lifestyles conveyed through drama and reality television; the news items covered’. ‘[D]ocumentaries, DIY, travel and cookery shows, and news coverage’ should all be re-geared towards ‘nudg[ing] viewers to take up sustainable actions’. This is alarming stuff. It is a call to make everything from news to drama subservient to a political cause – the political cause of imbuing the public with the green mindset. It is a proposal for the wholesale politicisation of news, drama and entertainment to the end of providing moral instruction to the masses. It feels virtually Stalinist.

It is a recipe for TV output that would be shot through with political messaging. Everything from your favourite cookery show to soap operas, from the nightly news to crime dramas, would contain subtle eco-messages designed to wriggle into our brains and alter our daily activities. This report is essentially calling for the use of social pressure via TV to make people change what we think and do. It says TV can demonstrate the ‘social desirability’ of going green and can use ‘social proof’ to transform behaviour. What is ‘social proof’, you ask? It’s the exploitation of the ‘power of role models, or the perceived majority, to convey to us that behaviours are normal, sensible, desirable, [and] expected of us’ (my emphasis). Once again, euphemism abounds. Strip back the soft, neutral-seeming language being used here, and it’s clear that this Sky / nudge-unit report is about using influential people and the spectre of the moral majority to demonstrate to the masses that they must change – that they are expected to change. ‘Social desirability’, ‘social proof’ – it all just means social conditioning; pressure to conform.

The most striking, and slippery, thing about the report is its emphasis on subtle, almost subliminal messaging. The ‘social modelling in both fictional and non-fictional content on screen’ that the report brazenly demands must apparently be promoted in an underhand way. ‘Make [the message] implicit’, the report says: ‘More subtle and implicit content can impact viewers, by normalising a product or an action, increasing viewer knowledge [and] improving their attitudes.’ This could mean ensuring that a fictional character is not shown ‘carelessly drinking from a plastic bottle’ or ‘showing a roof with a solar panel in the background [of a scene]’. Such subtlety is important for two reasons, the report says. First, because audiences don’t want to feel ‘preached to’ with noisy, blatant messaging (the irony). And secondly, because apparently it is these baked-in messages that have the most influence on the ‘psychological antecedents to behaviour’. That’s a lot of words to say ‘brainwashing’.

This emphasis on subtly sewing political and moral instruction into the background of pretty much everything is central to the ideology of nudge. Whether it’s nudge policies designed to change our food choices or the behavioural science that was deployed to ensure public obedience during the lockdown, the idea is that this social pressure – sorry, social modelling – must always be deployed in as natural and gentle a way as possible. People shouldn’t even really notice it, the nudging elites say. This captures just how authoritarian and anti-democratic nudge has become. It is expressly about circumventing the sphere of democratic discussion and instead just planting behaviour-change techniques in every nook of society, from supermarkets to TV shows to public bathrooms (that fake fly you might have seen on a urinal is a ‘nudge’, designed to make you focus your piss). At least when a nanny-statish law is passed, there is discussion about it – in the Commons, in the press, among the public. Nudging is designed to be above discussion. It just happens. It is injected into daily life with next to no debate. It is simply ‘made implicit’ in our lives.

This speaks to the inherent elitism of the nudge ideology. That nudgers’ only concern is how, not whether, their reconditioning of the masses should be carried out is testament to their belief that they are in possession of the truth, of the one right way to live, and that this truth must be subtly but thoroughly imparted to the rest of us. We must always have our attitudes improved, our behaviour changed, our awareness raised. The presumption, always, is that we are wrong, or bad, or immoral, so they – the enlightened ones – must correct us. No discussion. No need. As the Sky nudge report says, ‘The question must be not if, but how best to use this powerful tool of persuasion [TV] for maximum good’.

There are so many problems with this new paternalism. It is patrician, illiberal, averse to debate. And in the realm of broadcasting it is positively disastrous. When broadcasters, including news broadcasters, are signing up to a project to curate the physical and social world, then we are in trouble. News used to be about reflecting the world back to us and allowing us, the intelligent citizenry, to make up our minds about what was going on. Soon it might be about curating the world in the image of the nudging powers-that-be in order to correct the morals of us allegedly dim, destructive viewers. Journalists who curate reality rather than reporting it are crossing a line. They are eschewing objectivity and truth in favour of being part of a hyper-political crusade. What on Earth is Sky playing at?