Inflation: another symptom of the zombie economy

After Covid, we need a radical economic shake-up. 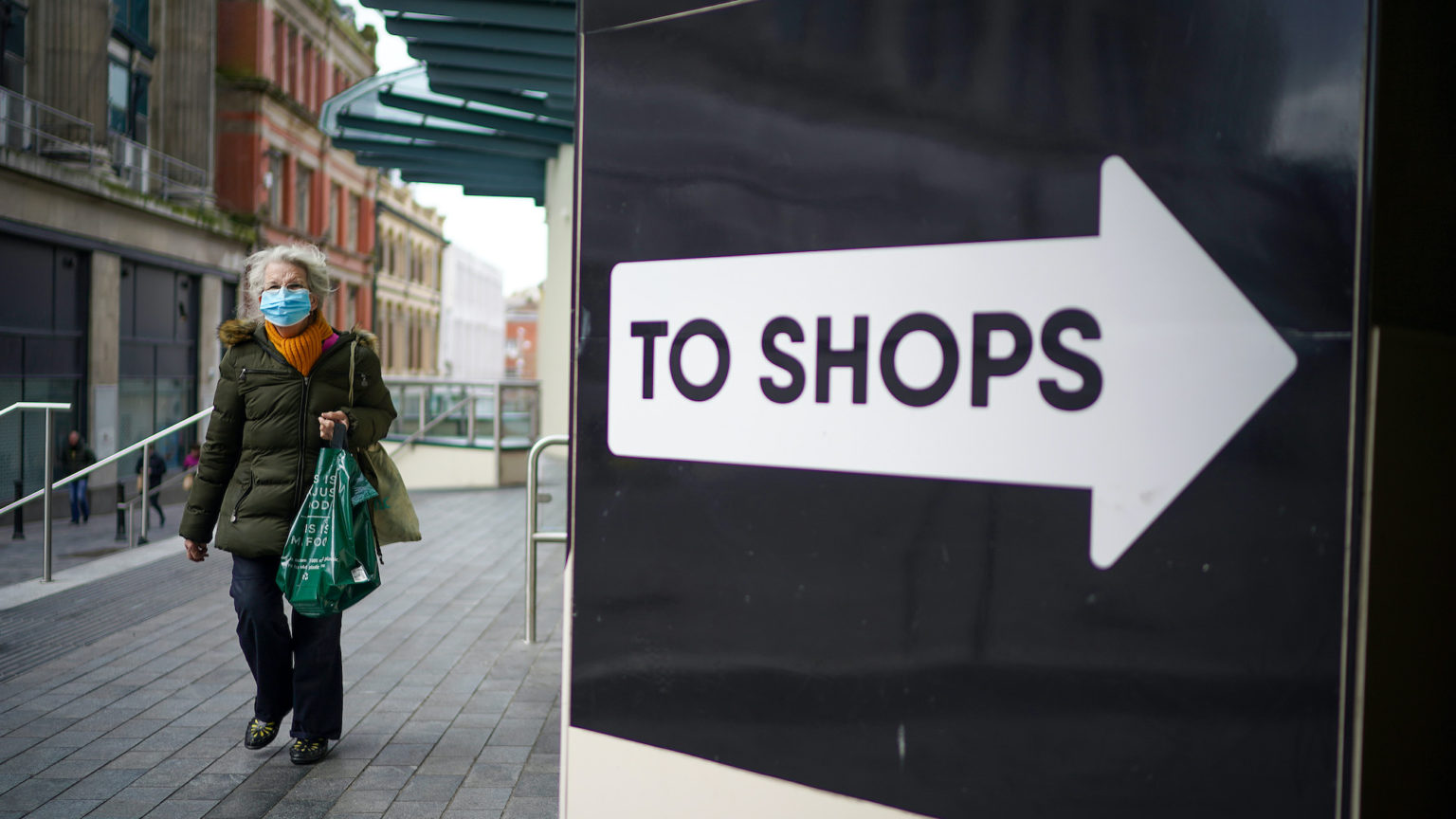 In both the UK and the US, the monthly inflation figures released this week came in well above the forecasts. In the US, consumer prices were expected to rise 4.9 per cent after a five per cent jump in May. Instead, they rose by 5.4 per cent from the same month a year ago. In Britain, the expectation was for a 2.2 per cent rise in the consumer price index from 12 months ago, after a 2.1 per cent reading in May. Again, expectations were exceeded, with a 2.5 per cent increase.

These announcements have added to fears from many economists that we could be seeing a return to inflation rates not seen for 40 years. Some anticipate a return to the ‘stagflation’ of the late 1970s, when price increases hit double-digit percentages in some years. Today’s inflation spikes are certainly abnormal. They follow three decades in which price rises have averaged about two per cent a year, and rarely went above four per cent.

This new inflation is mainly being attributed to expanded state spending – led by Joe Biden’s plan to ‘go big’ with government stimulus. The White House spending plans are in line with the wide consensus among international economic institutions that now is the time for fiscal activism. Their message is that a post-pandemic repeat of the austerity policies that followed the financial crisis of 2008-09 would be damaging. But almost as widespread is the call for caution – not to go over the top with measures to boost consumption, in case this rewakes the inflationary beast of old.

Some economic big guns, like former US treasury secretary Larry Summers and former IMF chief economist Oliver Blanchard, have been warning that the huge fiscal stimulus being proposed, combined with today’s ultra-loose monetary policies, could lead to economic ‘overheating’. Go bigger, but not too hot, they say. Their concern is that debt-based public expenditure, however welcome, risks rekindling everyday price inflation if it goes too far.

Inflation hawks believe that the central bankers are being complacent – just because we have had decades of monetary easing alongside low inflation does not mean this can go on forever, they argue. Some even suggest that central banks are failing in their responsibility to maintain price stability. Central banks, they say, should be ready to embark on monetary tightening in order to curb inflationary dangers. So far at least, central banks have been cool on these suggestions.

The US Federal Reserve, the European Central Bank (ECB) and the Bank of England have been on the ‘dovish’ side in recent months. Last year, the Fed said that it would accept inflation rising above its two per cent target to offset the fact that it has been below that level for so long. On balance, its message remains that monetary policy is likely to stay very loose for a long time, including retaining Quantitative Easing asset purchases probably into next year. In early July, the ECB adopted a similar stance, setting a new two per cent inflation target while announcing an increased tolerance for temporary price moves above that level. The Bank of England is aligned similarly.

Led by Jay Powell, chair of the Fed, most central bankers believe that the current high levels of inflation are ‘transitory’, and will fade away once the lockdowns have been fully lifted. Meanwhile, critics say any delay in monetary tightening will simply force the central banks to slam on the policy brakes harder at a later point, resulting in even greater economic disorder and perhaps an even harsher recession.

So who is right? The inflation hawks or the apparently dovish central bankers?

The first thing to point out is that no one should draw long-term conclusions from these latest inflation releases. In general, every economic data release this year, and into 2022, should come with a reminder not to overinterpret the data as these are extremely unusual times.

Year-on-year comparisons, not just for prices but for economic growth, consumer spending, productivity, unemployment, job vacancies and most other measures, are bound to be distorted by the impact of lockdown and the subsequent reopening of economies. The abrupt stop-start economic cycle – enforced by government directives and the behavioral changes that they have reinforced – means statistical records are now being broken on the way up, just as they were on the way down.

The current inflation data has been especially distorted as they compare today’s prices with a year ago, when economies were being shut down and most people were stuck at home, leading to a slew of flattish consumer prices. Today in contrast, certain prices are rocketing as a result of the unparalleled post-lockdown resumption of economic life, not just domestically, but also across global supplies. Such a sharp restart of economic life, all at once or in stages, was never going to be smooth. Blockages and shortages here, with spikes in demand there, are making the normal unevenness of market operations several times worse. Supply bottlenecks will take time to settle down, and in the interim prices of particular goods and materials (such as fuels) have climbed as a result.

On top of this there have been other one-off jumps in prices as emergency measures, such as VAT cuts in parts of the hospitality industry, are reversed. Across the board then, the prices of certain goods are rising and not just in comparison with the price falls last year. The process of turning social and economic life back on again is messy, as governments, society and economies stumble along the path towards some version of normality.

The worldwide shortage of semiconductors – exacerbated by production and distribution problems in lockdown – is one of the better-known symptoms of this bumpy process. The disruptions caused to car production in the West has resulted in consumer-price increases for new, used and even rental cars. These kinds of glitches are being repeated across the economy, not least in areas that are starting up again pretty much from standstill.

Labour shortages have been another widely reported symptom. As pretty much the whole hospitality and leisure industries are opening up at the same time, then it is not surprising that employers are having difficulties filling all their vacancies. This mismatch is exacerbated by the fact that some people are still on furlough and many of their former employees have found other work – temporarily (such as test and trace workers), or maybe permanently (including in e-commerce warehouse and delivery jobs). It is also not surprising that some better-funded employers will offer higher wages to try to fill positions more quickly. The data on wage increases adds further to fears that inflation is returning.

Given all these post-lockdown dislocations and price jumps, central bankers have reason to portray the recent inflation data as temporary. But sometimes what starts as temporary can become permanent – not least when it comes to inflation. If businesses expect input prices to carry on rising, then output prices might be increased to compensate. Since one business’s output is often someone else’s input, in theory, an inflationary spiral can develop. And when governments and central banks are stimulating demand, allowing businesses and households to spend more, then these increased wholesale and retail prices could be more easy to pass on to the consumer.

I say ‘could’ because it is not inevitable that money sloshing around will lead to sustained consumer inflation. The pandemic lockdowns have magnified the amount of liquidity flowing through the system, yes. But there was a lot of this happening pre-Covid, and inflation was subdued back then. Or to be precise, consumer inflation remained low. Instead, the long era of ever-easier money has helped to fuel inflation in financial assets like bonds and equities, house prices and the prices of ‘alternative’ assets, such as gold, cryptocurrencies, art and fine wines.

It is impossible to predict if inflation might later shift from the financial and asset markets to the prices of everyday goods and services because this depends a lot on the policies our governments adopt. What matters most is the state of the broader economy. Prior to the onset of Covid-19, most Western economies had been constrained by a long-term lack of productive investment, expressed in the lacklustre spread of innovation, and a dearth of new sectors, businesses and good quality employment. This lack of business investment has resulted in a zombie economy, which is both sustained yet simultaneously handicapped by growing corporate indebtedness.

In fact, the complacency of central bankers about this debt trap is far more worrying than their apparent accommodation to higher consumer inflation. All the pre-existing economic problems caused by debt dependence have been magnified over the past 18 months. The wider responsibility of central banks for economic and financial stability is making them reluctant to ease off on, never mind reverse, their loose monetary policies. Central bankers fear that even a small amount of tightening might trigger a wave of corporate defaults and crashing asset prices, with the potential for additional unemployment and turmoil in the financial sector. But they also know that pursuing more of the same will perpetuate this debt trap. This leaves them with a huge policy dilemma.

The more immediate and fundamental question than the prospects for inflation, is what if anything will be done to clear the pre-pandemic depressionary – and deflationary – forces that have been keeping most Western economies stagnant. Even if governments’ big spending plans are implemented (which is by no means certain), as long as much of the corporate world remains anaemic and defensive, the post-lockdown, demand-driven ‘bounce-back’ is much less likely to evolve into sustained inflation.

That would depend on whether business chiefs can get away with steadily increasing prices to support their profit margins. If economic demand can be artificially sustained for long enough, then consumer prices could well continue to be pushed up. However, if weak business investment persists, this will be a major offsetting deflationary pressure. Whichever way inflation goes, it is always more of a symptom of our economic malaise than the problem itself.

In any case, the data won’t be clear until well into 2022. This means attention over the next few months should be focused less on the inflation figures and other distorted data and much more on the core economic choice facing all Western governments post-pandemic. Will they continue with muddling through, or, at long last, make a thoroughgoing attempt to shake up production? A shake-up is what we need in order to clear the way for much stronger investment in innovation, jobs and growth. This could not only change lives for the better – it could also stave off some of the medium-term inflationary pressures, too.