Their football and ours

After the Euros, England is more divided than ever. 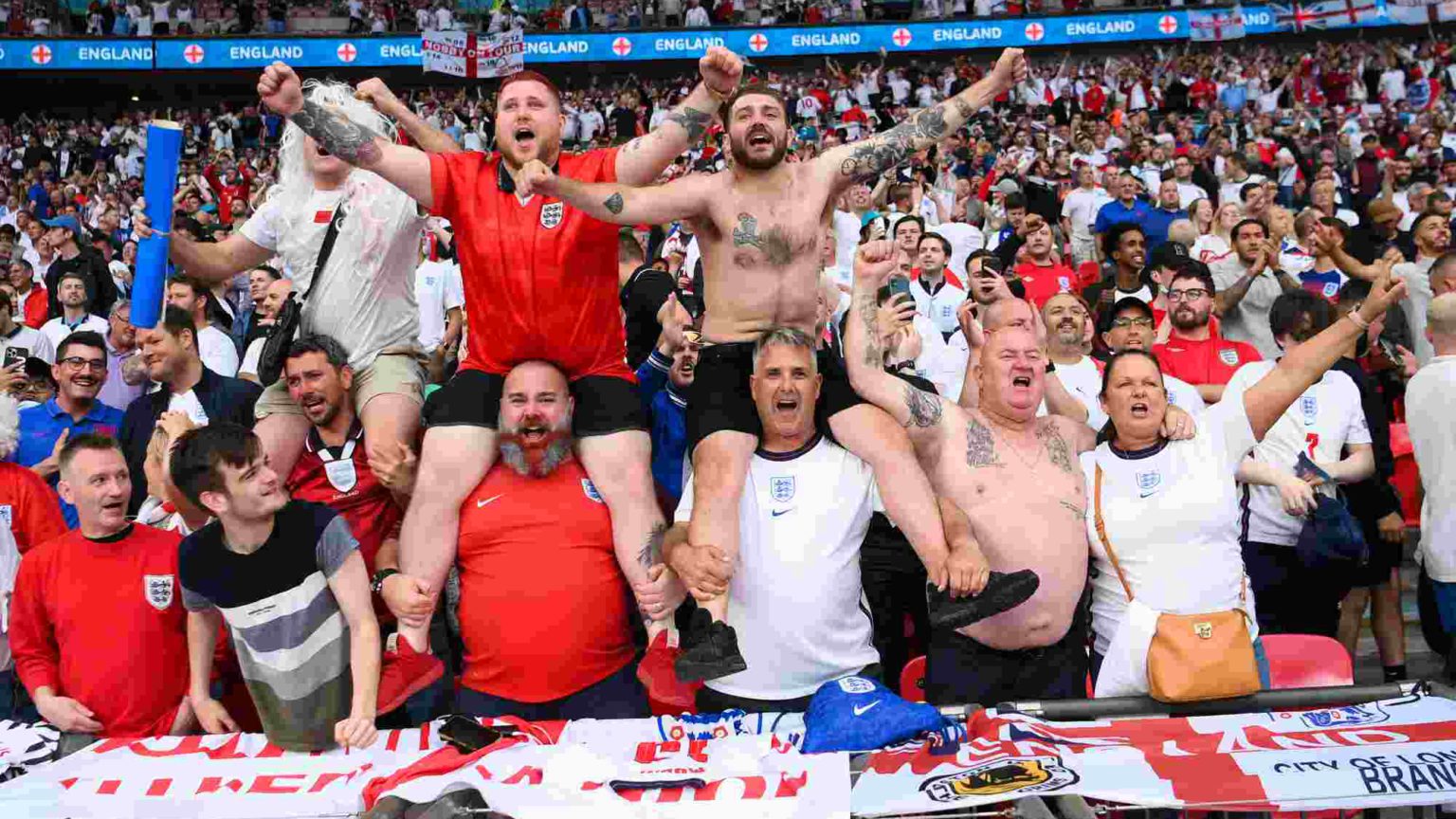 That didn’t last long, did it? All those worthy comment pieces about the nation pulling together behind England. All those political declarations of how Gareth Southgate and his boys have united the nation in a vision of decency, diversity and moderation. All those members of the woke middle classes tentatively picking up a St George’s cross – a flag they would normally scoff at as they see it flapping from the windows of the less gentrified parts of town – and claiming that football has once again become a source of ‘fun, beauty and solidarity’. All of these platitudes have evaporated into a cloud of hostility this morning as the elites launch what promises to be a vicious backlash against working-class fans. Make no mistake: it’s back to business as usual.

An ugly atmosphere is taking shape. It is palpable. Just hours after England lost to Italy, causing millions of us to weep into our beers, there has been a nasty turn against fans. The brief hiatus in class hatred is over. Witness the moralistic handwringing over all the litter and empty beer bottles left by the hundreds of thousands of fans who partied across London and other cities last night. Or the panic about the final being a ‘super-spreader event’, with all those sweating, shoulder-rubbing fans potentially inflicting their working-class germs upon the entire nation. Or the way in which the racist abuse being hurled at penalty-missers Marcus Rashford and Bukayo Saka by handfuls of regressive morons is being extrapolated from to depict all of England as a racist hellhole. Such racial ‘thuggishness’ is a ‘national trait’, insists one disgusted columnist.

The commentary drips with snobbery. Fans ‘poured’ into London and left it a ‘complete mess’, we’re told. The Express cries ‘Shame of England!’ and has brought together its favourite outraged tweets about England’s slobbish, marauding fans. ‘Dumb, violent, Covid-superspreading litter-louts make this island no sort of home for football to come back to’, said one. ‘England players have not let the country down tonight, but plenty of England fans have. Completely and utterly embarrassing, if entirely predictable’, thundered the sports broadcaster Jacqui Oatley. Across the land this morning, the middle classes who dabbled in a bit of ‘footie’ for the duration of Euro 2020 will no doubt be feeling something similar – that football isn’t a bad game, but God its fans are ghastly.

Familiar prejudices lurk behind this woke backlash against fans, which, by the way, is also ‘entirely predictable’. There’s the prejudice about large gatherings of working-class men being by definition dangerous and diseased. That’s why the elites fret like mad about football matches being ‘super-spreader events’ but never say the same about Wimbledon, where thousands gathered yesterday to watch the Men’s Final. They’re nice people, you see. Likewise, when the middle classes took to the streets for Black Lives Matter and Extinction Rebellion protests last year, there was very little concern in the commentariat about the spread of disease. Maybe people who chant ‘In-ger-land!’ are more susceptible to this virus than plummy ladies who glue themselves to the windows of banks to make some kind of point about climate change? Or maybe we’re just witnessing the rehabilitation of the old view of working-class people as toxic.

And then there’s the racism issue. It is depressingly inevitable that the tiny minority of people making racist comments on the social-media feeds of Rashford and Saka will be held up as representatives of this whole nasty little country and its nasty football-following people. Indeed, a writer for the Independent says such racism is not the exception. Rather, it speaks to the fact that ‘this little island with its already jingoistic people has been reduced, boiled down to nothing. A Brexit broth.’ Ah, Brexit. Foul, poisonous Brexit, probably voted for by most of those boisterous working-class fans whose presence on our TV screens yesterday so horrified the moralistic clerisy of the broadsheet media. Capturing the darkly ironic tendency of supposedly anti-racist identitarians to dehumanise large swathes of the population, the Independent writer even advises us to look ‘higher up the food chain’, where we will see the likes of Priti Patel endorsing fans who booed the taking of the knee. ‘Food chain’ – nice.

Branding people lower down the ‘food chain’ as racist is the new way of calling them uncivilised. This is why it isn’t just the actual racists on Twitter and Instagram who are being called racist, but fans more broadly. ‘It’s very easy to say that these people don’t represent England – however, this is too much of a regular occurrence to be so obtuse’, says one observer. Apparently these scumbags are everywhere, ‘in our workplaces, teaching our children, working in hospitals’. And of course booing the taking of the knee is now being lumped in with the foul practice of sending monkey emojis to black players. It’s all racism, apparently. It’s all the same. This is a way of delegitimising criticism of BLM and its divisive politics of identity by linking it to expressly racist comments. We aren’t even 24 hours on from the Euros denouement, and already it is being cynically exploited to demonise fans and chill opposition to the hyper-racial virtue-signalling of the new elites.

Of course millions of us enjoyed the tournament. It was thrilling. England has players of brilliant promise who could do wonders in the World Cup next year. But we have also seen how wrong it was to believe that this competition would unite a nation as fractured as ours. The culture wars, and in particular the class war against those judged responsible for landing us in the ‘Brexit broth’, are too entrenched to be overcome by the fleeting shared joy of watching Shaw score or Pickford save almost everything. If anything, the culture wars have intensified off the back of the Euros. From the knee controversy to all the discussion about the players being ‘role models’ for a nation in need of moral correction to the racism question and the speed with which that has been turned into proof of the rot in England’s heart, the tournament was ruthlessly politicised, with some in the elites seeking to turn it from a sporting spectacle into a paternalistic educative moment.

To paraphrase Trotsky, this is a situation of ‘our football and theirs’. To the vast majority of football’s traditional working-class fans, this is a game for letting off steam, for expressing passion, for engaging in the pantomime of team and national conflict, and for being part of something that feels genuinely based in solidarity. For the elites, on the other hand, football is a site of moral instruction, a way to re-educate the throng into the orthodoxies of our time – identitarianism, the new linguistic correctness, the cult of diversity as defined by the race managers of contemporary technocracy. That’s why they want footballers to be role models – so that they might prise open the eyes of the ‘unaware’ masses – while the rest of us just want good players. It doesn’t matter that Rashford secured free school meals for kids if he can’t score a penalty. This is the truth of the unbridgeable divide between our football and theirs.

Everyone needs to calm down about yesterday. Was it noisy and messy? Of course it was. It’s football, not bowls. But it was also a brilliant working-class revolt against lockdown, a reclaiming of the liberties our government has suspended for the past 18 months and of that feeling of real, physical solidarity that has been denied to us by law. Millions of people went maskless into the streets, into pubs, into the stadium, and in the process they brought Boris’s so-called ‘Freedom Day’ forward by a week. This is why the elites are so horrified today – they never like it when ordinary people decide that they know better than the expert classes. But we do. We know when it’s time to get society back to normal. And we know what football is: an often thrilling sport, not a site for PC homilies and hectoring.