The price of your cowardice

The liberal elite’s failure to defend the Batley Grammar schoolteacher is a black mark against this nation. 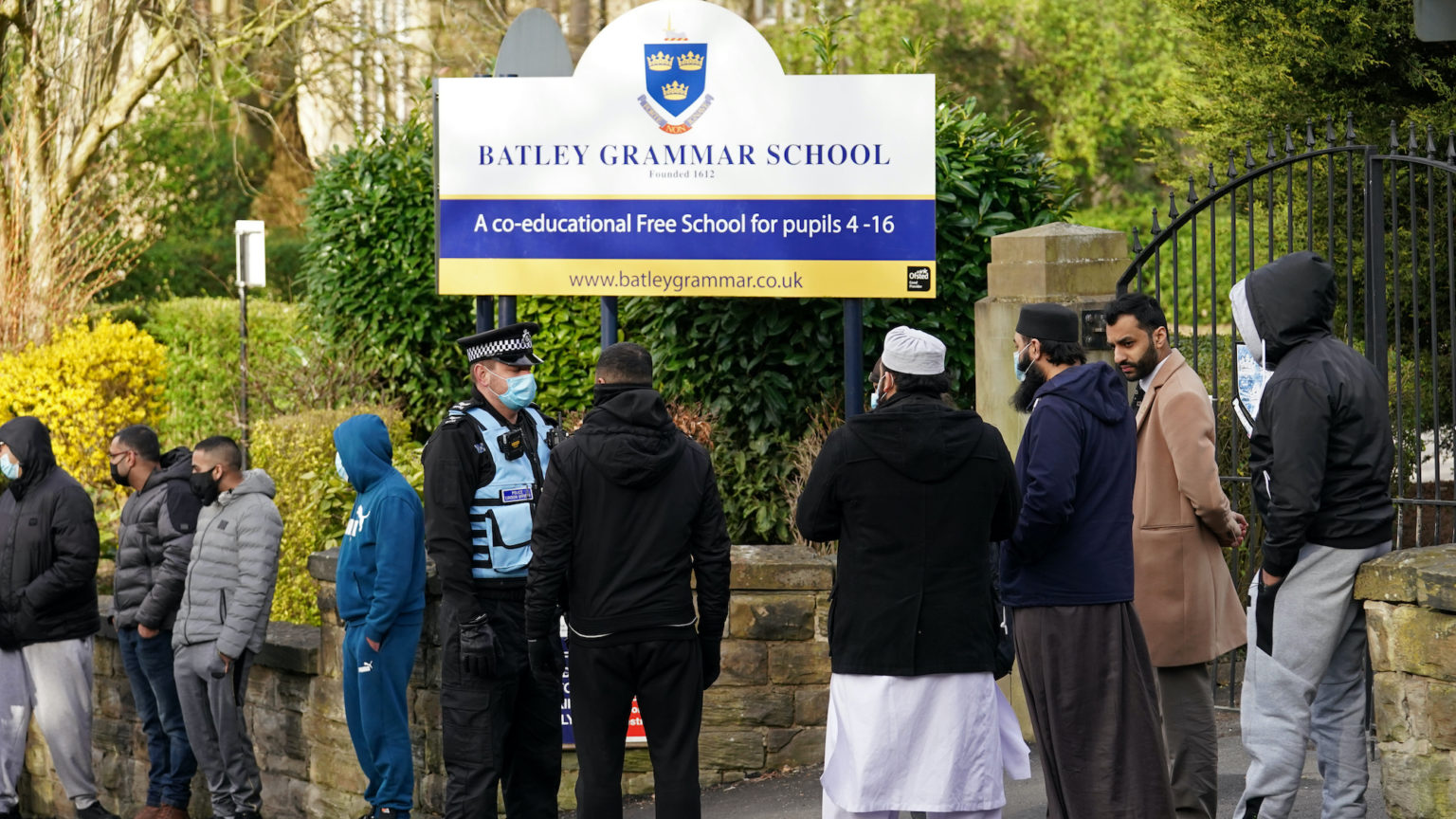 The father of the Batley Grammar schoolteacher who was suspended for the supposedly blasphemous offence of showing his pupils an image of Muhammad has spoken to the Daily Mail. It makes for distressing reading. His son is an ‘emotional wreck’, he says. He ‘keeps breaking down and crying and says it’s all over for him’. Worse, he fears for his life. He fears for his family’s lives.

‘He is worried that he and his family are all going to be killed’, his dad says. ‘He knows that he’s not going to be able to return to work or live in Batley. It’s just going to be too dangerous for him and his family. Look what happened to the teacher in France who was killed for doing the same thing. Eventually they will get my son and he knows this. His whole world has been turned upside down. He’s devastated and crushed.’

All that over an image. Over a cartoon. A man suspended from his job and hounded out of his hometown over a picture of Muhammad. A young family (the teacher is in his late twenties) living in fear of violent retribution over a caricature. In Britain in 2021, in this supposedly modern, post-religious nation, a public servant fears for his life because he showed his teenage pupils an image of a seventh-century prophet. What the hell is going on?

This is the price of liberal cowardice. What is happening in Batley is the logical conclusion of the liberal elite’s abandonment of the ideal of freedom of speech. The most shocking element of the Batley controversy is not actually the gruff protesters turning up to the schoolgates every day to demand the sacking of a teacher who offended their fragile sensibilities. It’s the broader establishment’s failure to defend the teacher, to stand by him, to insist on the right of educators to think freely and to engage their charges in open, critical discussion.

It is this craven turning away, this spineless reluctance to defend a teacher whose only offence was to exercise freedom of thought in his classroom, that will have fuelled this young man’s descent into such devastation and fear. For it is one thing for handfuls of religious extremists to shout abuse at you. But for society itself to abandon you? For the educational establishment to stare at its feet as you fear for your life? For the liberal intelligentsia – which is increasingly neither – to prevaricate and wonder out loud if maybe you are at fault for displaying an inflammatory image?

That’s the true kick in the gut. That’s what really illustrates the corrosion of liberty in 21st-century Britain. That’s what captures how broad and deep the crisis of freedom is right now.

Everyone, of course, is disturbed by the images of young Muslim men outside Batley Grammar arrogantly demanding the punishment of a teacher for allegedly offending their religious beliefs. These are indeed shocking and ridiculous scenes. The men represent an extraordinary combination of wimpish vanity and authoritarianism. Despite living in a largely secular society that doesn’t have blasphemy laws, they weirdly believe they have the right to wag their fingers for days on end at a school where an image of Muhammad was briefly displayed. It is equal parts perverse and laughable.

But at the same time, aren’t they only doing what we would expect them to? These are religious reactionaries, people who genuinely feel wounded when a kaffir disses Muhammad (though of course the schoolteacher, so far as we know, did no such thing). They are conforming to type. It is those who are failing to do what they’re meant to do who should disturb us more. For their failures are the fuel of this mob.

Schools are meant to stand up for their teachers when wild accusations are made against them. But Batley Grammar has flat-out refused to do this. Instead it suspended the teacher and issued an abject apology for his display of the image of Muhammad – a depraved act of public contrition for a made-up crime of blasphemy. Teachers’ unions are meant to defend their members when they are unjustifiably suspended and targeted by reactionary mobs, but the teaching unions are maintaining a morally invertebrate silence on the Batley controversy.

Liberal commentators and self-styled progressives are meant to defend individuals who are howled down as blasphemers and threatened with punishment for speaking ill of gods, prophets or gospels. But this time they aren’t. Instead they’re stroking their chins in their comfortable offices, wondering if the protesters have a point, wondering if it’s appropriate to show kids ‘racist’ images related to Islam. The Huffington Post actually refers to the image displayed in the Batley classroom as a ‘racist caricature’. A supposedly liberal media outlet standing shoulder to shoulder with religious reactionaries to promote the idea that it is racist to depict or criticise Muhammad. All while a man fears for his life at the hands of radical Islamists. What ridiculous apologists for extremist religious censure.

These failures of liberal society horrify me far more than the noisy idiocy of the protesters outside the school. Sure, their enthusiasm to get a man sacked for offending against Muhammad is chilling. But it is the deadness of the elites, their inability to muster up any enthusiasm at all for the right to speak freely, for the right of schoolteachers to engage their students in critical discussion, that is properly alarming.

Yes, the protesters reveal that there are worryingly reactionary elements in our society. But the shoe-staring cowardice of almost every wing of the educational, political and commentating elites in response to a young man living in fear because he displayed an image of Muhammad reveals a far more serious decay in the values and institutions of our society.

Of course the two things are linked. It is the cowardice of the establishment that acts as a red rag to the mob. It is the liberal elite’s abandonment of freedom of speech and its embrace of the divisive ideologies of identitarianism and cancel culture that fuels today’s incessant, sectional cries for censorship of those who give offence. It is supposed progressives’ startlingly uncritical promotion of bullshit terms like ‘Islamophobia’ that has helped to nurture the nonsense idea that it is racist to criticise Islam and which has fuelled the grievance industry whereby unrepresentative, self-elected Muslim groups are forever demanding the censure of anybody who is less than effusive about their religion.

Indeed, too many on the right seem to view the events at Batley Grammar as entirely alien, as a case of a foreign culture – Islam – interfering with the great British tradition of liberty. But listen to the protesters’ language. They talk about the schoolteacher ‘stirring up hatred’. They say kids must be ‘safeguarded’ from offence. They talk about their ‘wellbeing’. This is the language of the liberal establishment. These religious conservatives are weaponising the British elites’ own abandonment of liberty, and the institutionalisation of ‘hate’-policing and cancel culture, to advance their warped religious conviction that critics of their prophet must be punished.

The Batley crisis shines a light on the depressing unholy marriage between radical voices in the Muslim community who want to punish ‘blasphemers’ and a liberal elite that has traded in the ideals of freedom for new forms of thought-control, speech-control and clampdowns on so-called ‘phobias’. And as a result, a man is fearing for his life. His fear, his sense of devastation, is the price of your cowardice. The establishment’s moral failures over Batley Grammar are a black mark against this country. They should not be forgotten.