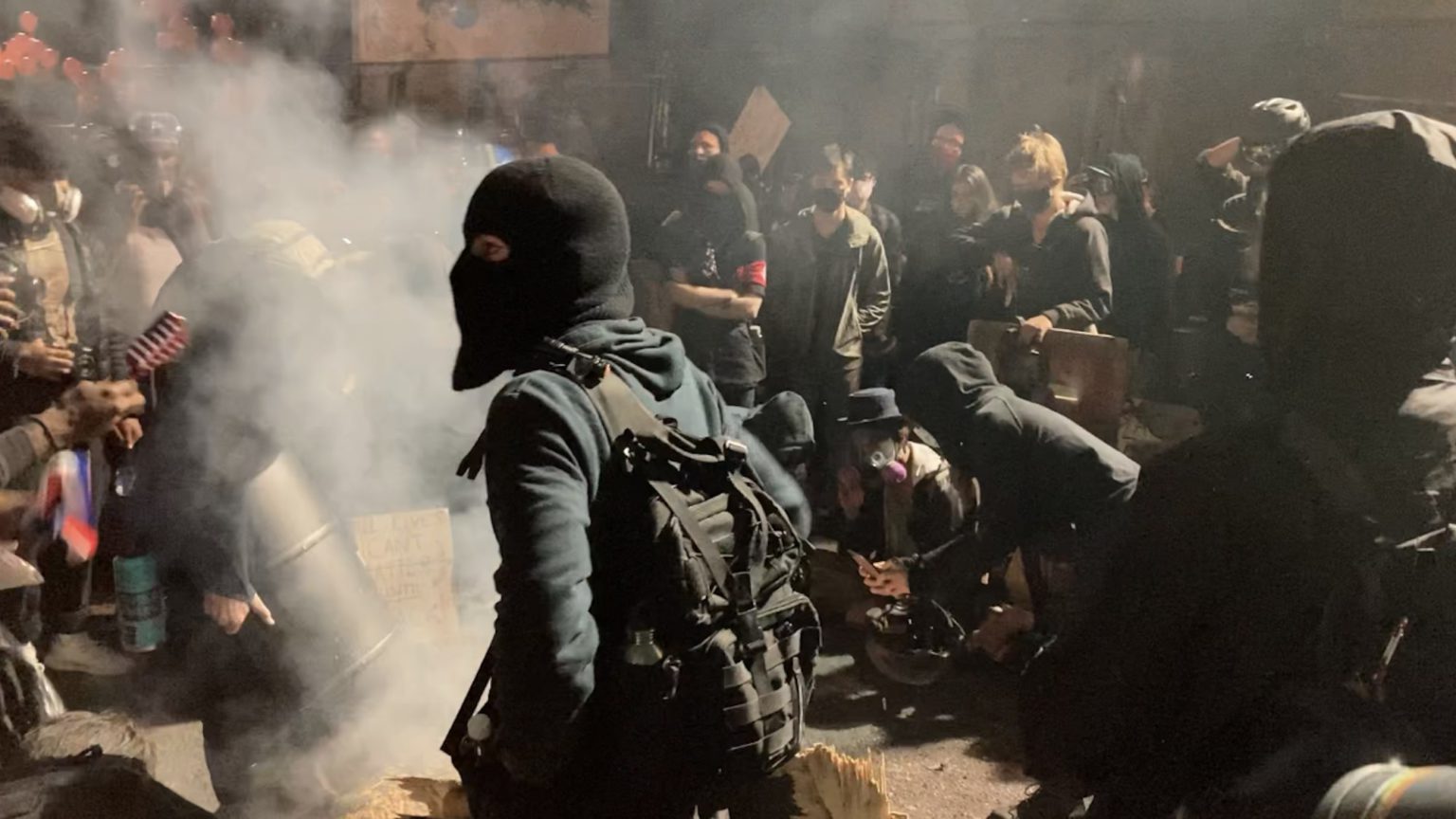 We are turning a blind eye to political violence

I have seen America’s vicious cycle of violence up close – at the Capitol and on the streets.

There I stood inside the US Capitol on 6 January this year, filming a group of Trump supporters tearing apart office furniture. Moments later, I captured a viral moment of a mother from Pennsylvania yelling into a bullhorn. For months beforehand, I had been wondering: is there even a far right or a far left anymore? 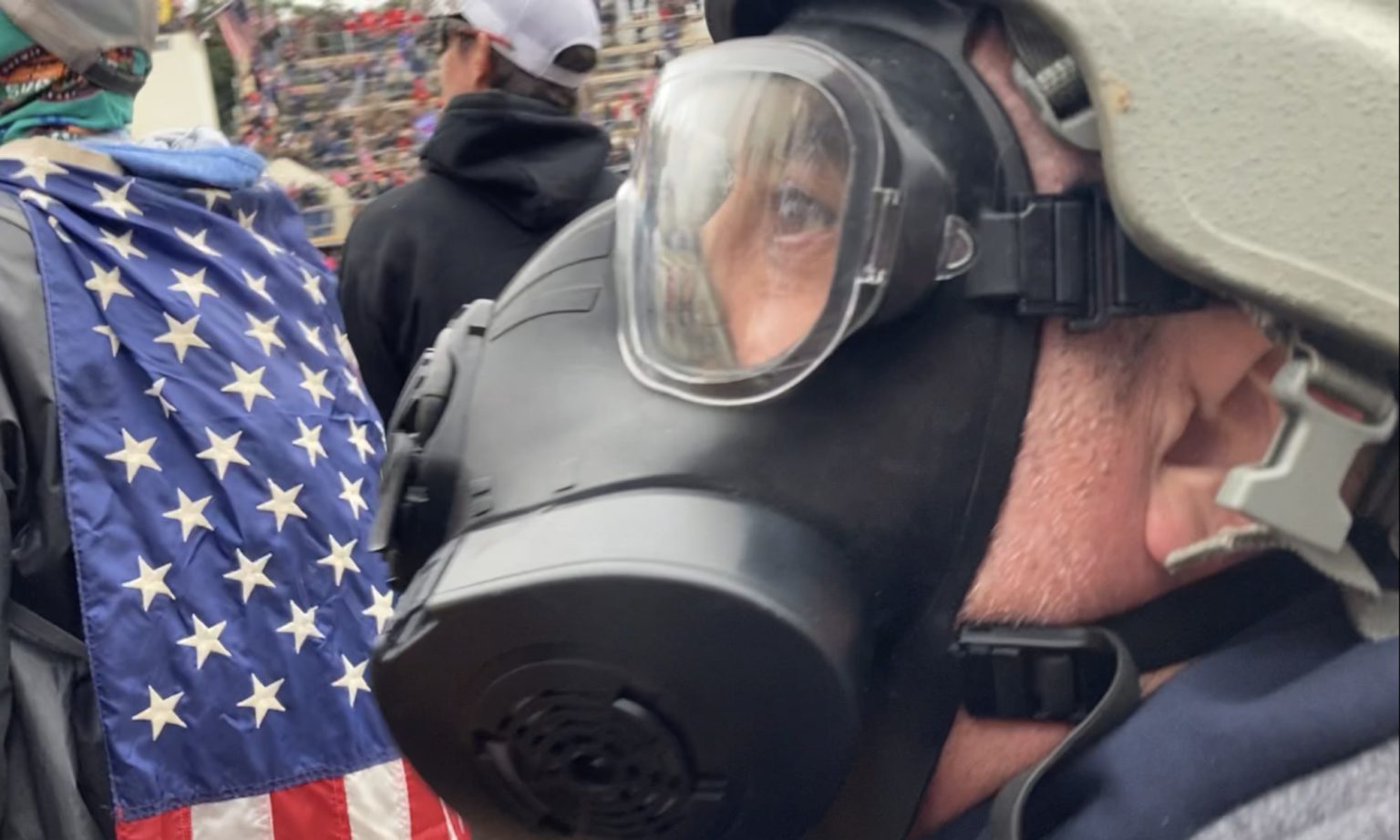 A man in a helmet and gas mask gazes up at the US Capitol. Washington DC, 6 January, 2021.

Of 290 arrestees from the Capitol, just over one in 10 were affiliated with ‘militia / violent right-wing’ groups, including the Proud Boys, the Oath Keepers and the Three Percenters, according to a University of Chicago study. An author of the study, Keven Ruby, told me that only one of the nearly 200 initial arrestees held an ethno-gang affiliation: ‘The gang in question is the Latin Kings, not a white-nationalist gang. We found no evidence of specifically white-nationalist gangs among the arrested.’ As later arrestees were added to the study, it was updated to include one ‘Aryan Nations’ member. But Ruby’s overall characterisation still differs starkly from the impression sold by the mass media.

When discussing political violence on the right or left, we have a collective responsibility to understand the problem holistically, rather than using the abject behaviour of one side or the other to score political points. After all, just as violence begets violence, so polarisation and cultural complicity beget more of the same. 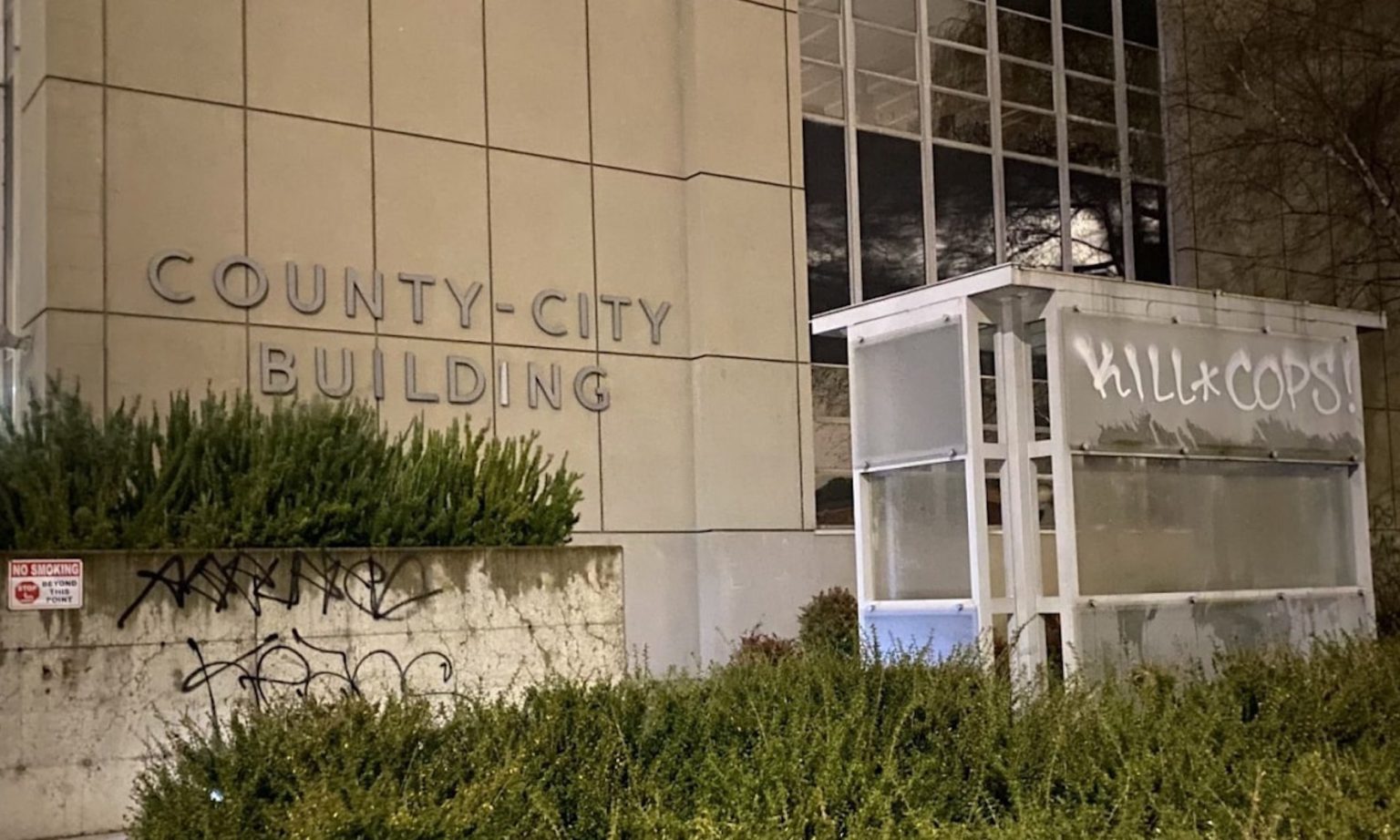 This thought came to my mind on 24 January, when I was on the streets of Tacoma, Washington. I watched an Antifa-aligned mob of black-clad youths chase an evangelical counter-protester away from their street fire. One individual swung at the man using a large pole with a small street sign attached to the end. The youth wielded the weapon like a giant fly swatter. 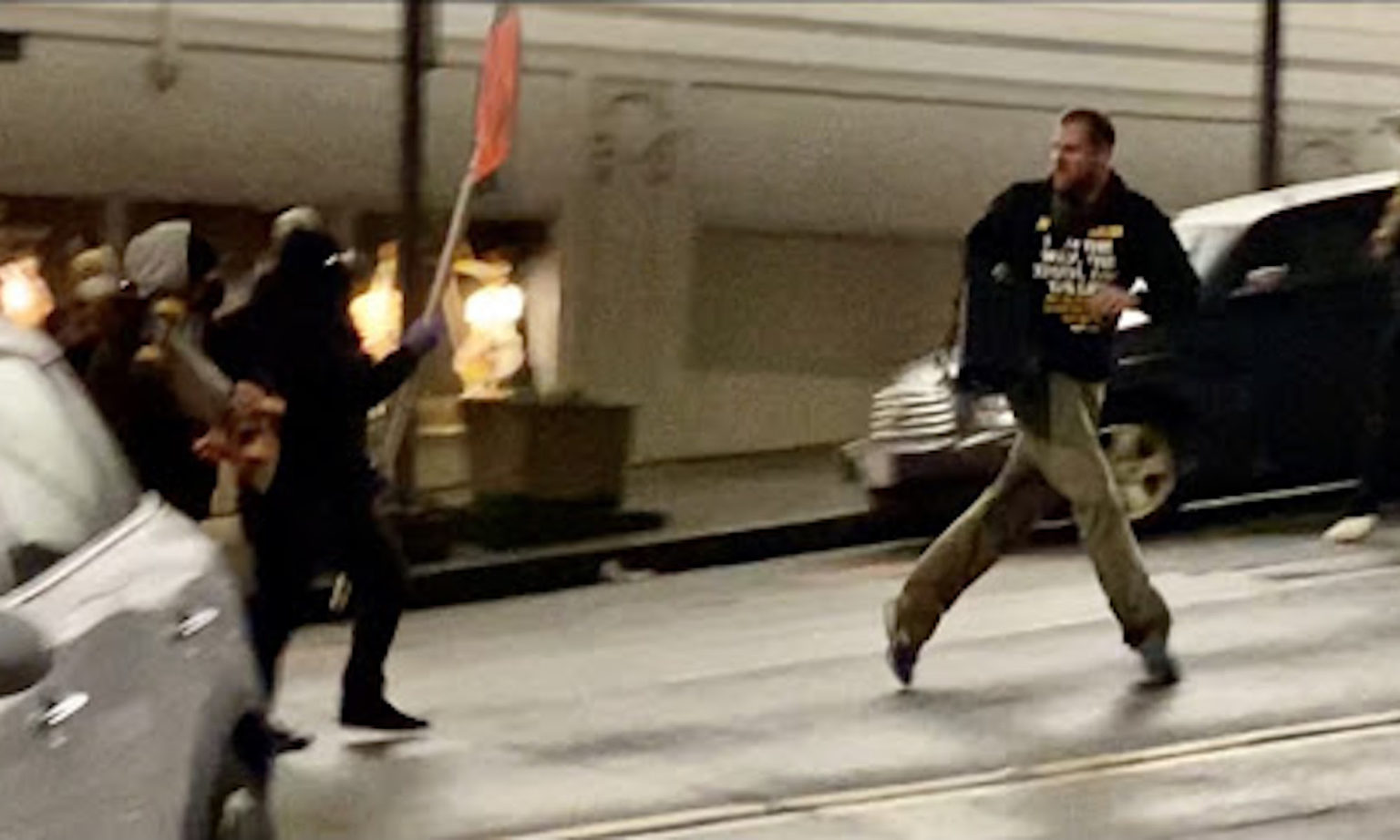 Eventually, the evangelical man was maced in the face. He kneeled over in the middle of the road and cried out, ‘Praise God’. The attack, like those I had witnessed in San Francisco and Sacramento, California and in Washington, DC, was not unique for an Antifa-aligned mob.

That night, the mob in Tacoma chanted, ‘every day, every night’, as crowbar-wielding vandals smashed store windows, while others left anti-police graffiti in their wake. Little information about the night’s escapades made the national press.

That same week in Portland, Oregon, on the night of Joe Biden’s inauguration, rioters launched attacks against the federal Immigration and Customs Enforcement (ICE) facility. They spray-painted ‘Kill cops!!!’ on the exterior. 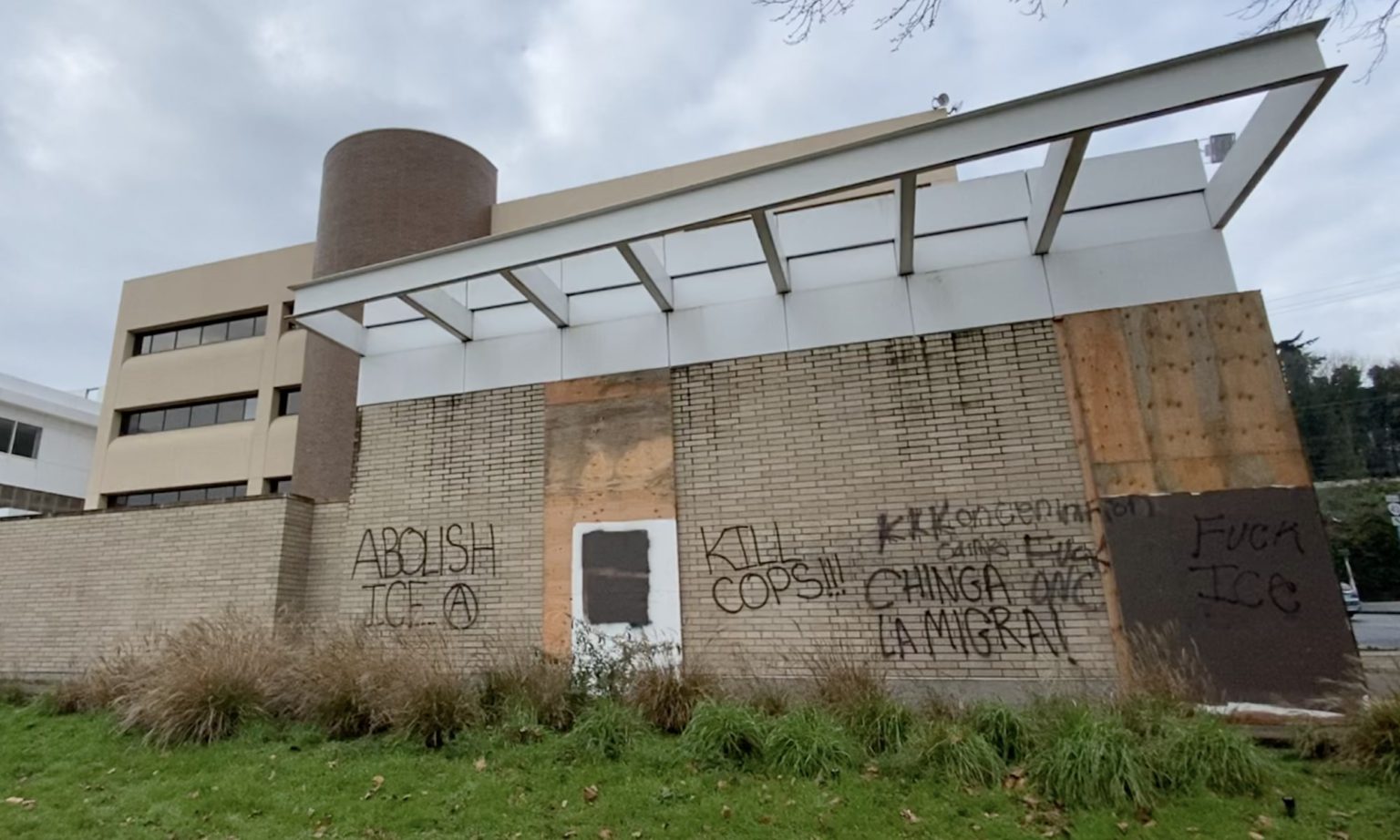 Tear gas hangs in the air after a night of confrontation between law enforcement and leftist rioters. Portland, Oregon, 21 January, 2021.

Political riots and violence on the left have a recent history that can be traced back to events in the San Francisco Bay area in November 2016, on the night of Donald Trump’s election. That week, riots spread across the bay to Oakland. Riot tactics became widespread in the Pacific Northwest, Chicago, Illinois and Washington, DC in the week of Trump’s inauguration in January 2017. Then, things hit a fever pitch over the summer of 2020. The genie was out. ‘Black bloc’ tactics had gone viral.

On 7 January, 2021, the night after the Capitol riot, I interviewed a Californian man with a paramilitary look near the Capitol building. He said he had been at the riot the day before. He admitted to studying ‘hundreds of hours’ of video of leftist ‘resistance’ techniques. ‘For the last eight months, Black Lives Matter and Antifa have proven and shown that violence works’, he told me. I asked him if he was an extremist. He said yes: ‘We are a nation of extremists.’

He also said, ‘I don’t have a problem with National Socialism’. I had no real understanding if this man was on the fringe, or the fringe of the fringe. He may have moved in more than one circle. 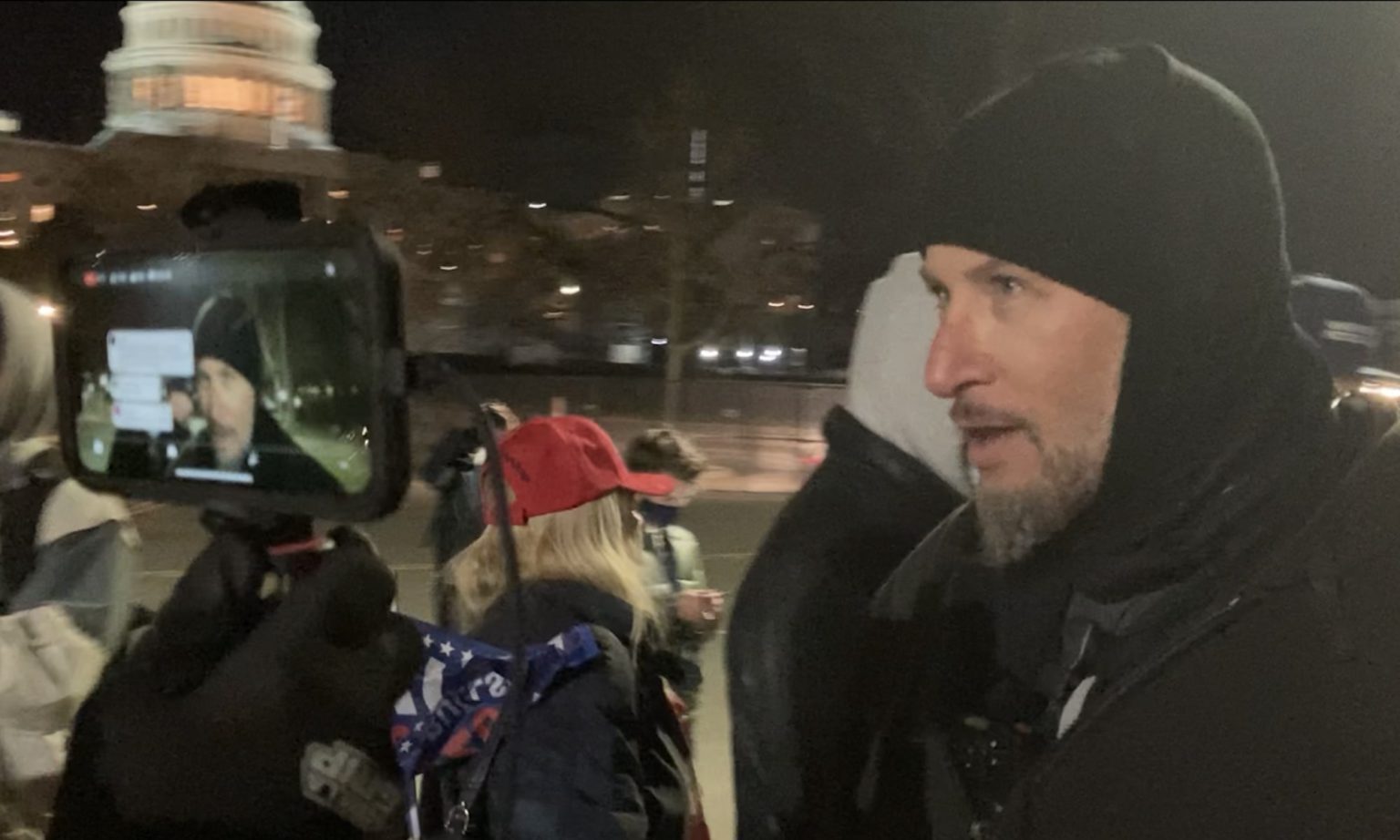 A self-identified ‘extremist’ who said he was present at the Capitol on 6 January. Photo taken the next evening. Washington, DC.

I did not argue his point in regards to the violence I had witnessed on the left. But the right has also had its own excesses. Unrest at two right-wing state-capitol riots in Salem, Oregon in December 2020 and January 2021 were bellwethers. And I would be remiss not to mention the ‘Unite the Right’ rally in Charlottesville, Virginia in 2017 as further evidence of right-wing extremism.

But independent photojournalist Ford Fischer, who documented both the Charlottesville rally and the Capitol riot, differentiates the two crowds. According to him, ‘It would be hard to say there were coordinated white nationalist groups at the Capitol. But you can name examples of white-nationalist-leaning people or white-nationalist-tolerant people who attended.’

The Proud Boys were among the arrestees at the Capitol. Prosecutors charged five of them with conspiracy last month. But the Capitol arrestees who have garnered the most attention are the man in the ‘Camp Auschwitz’ top and the QAnon ‘shaman’, whose vegan food requirements have many on the right questioning his credentials. Are these fringe outliers truly representative of the wider mass? We could ask the same of the left.

In Denver, Colorado, I marched next to a man with a full-shoulder tattoo of Joseph Stalin. I have seen more hammers and sickles spray-painted on buildings than I can count. I have heard chants for ‘more dead cops’ from LA to DC.

At every protest, the handful of us on the ground who have kept our cameras rolling continue to ask why the media opts for platitudes over the messy truth. Why were hate-crime charges against the Antifa-led Black Bloc in Berkeley, California last October not more widely known? Black conservative activist Philip Anderson attempted to organise a rally against Big Tech and his two front teeth were knocked out before the rally even began, by a Black Bloc assailant wearing hard-edged, carbon-fibre-type gloves. Those same gloves are constantly marketed to me in pop-up ads on Facebook. The algorithm must have clocked that I have been up close, watching a society in decline.

On 5 December 2020, a young conservative couple were beaten on the pavement by a group of Berkely Antifa and Antifa Sacramento activists. This didn’t make the headlines. 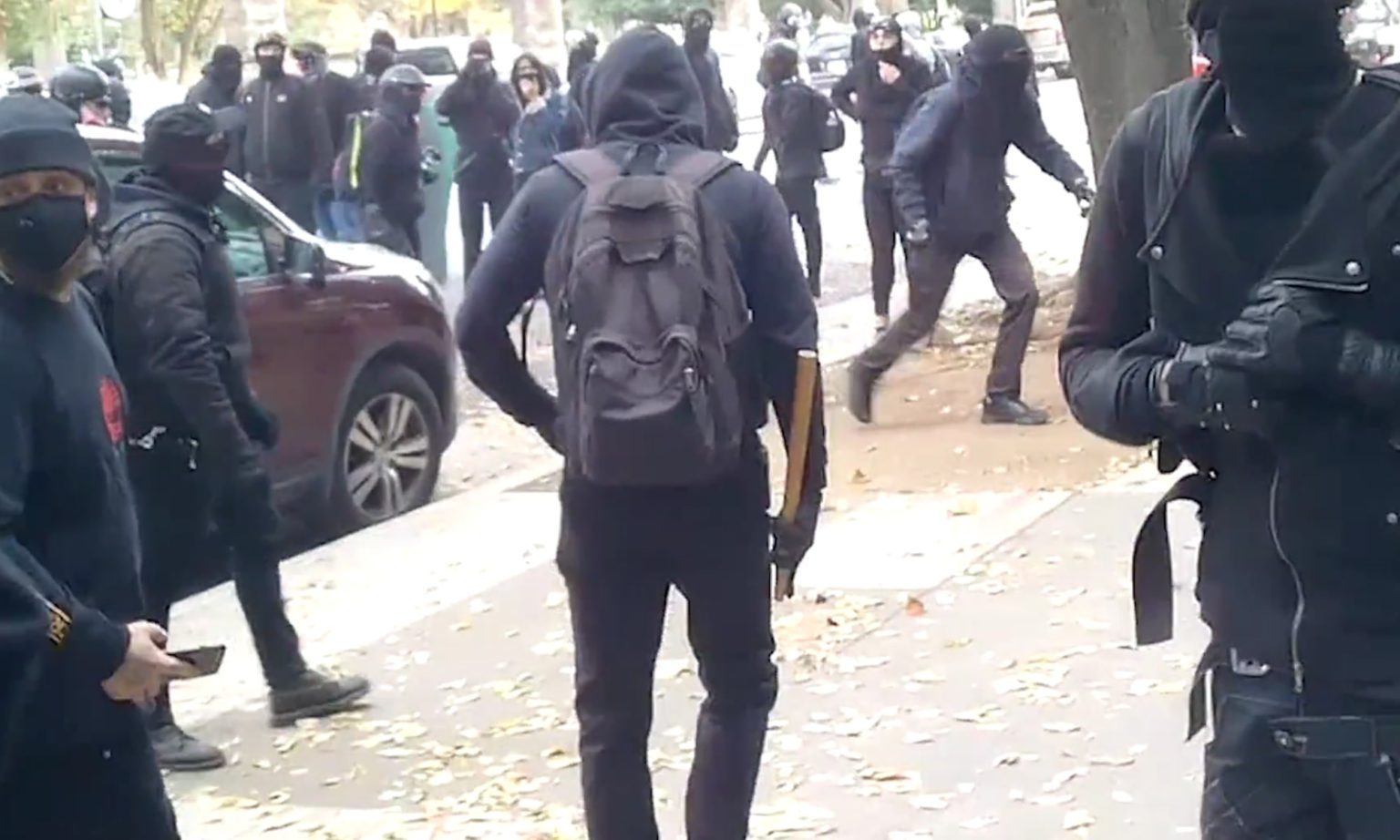 ‘They damn near killed them’, shouts an observer as a Black Bloc rioter with a club walks away from the scene where a young couple were beaten. Sacramento, California, 5 December, 2020. 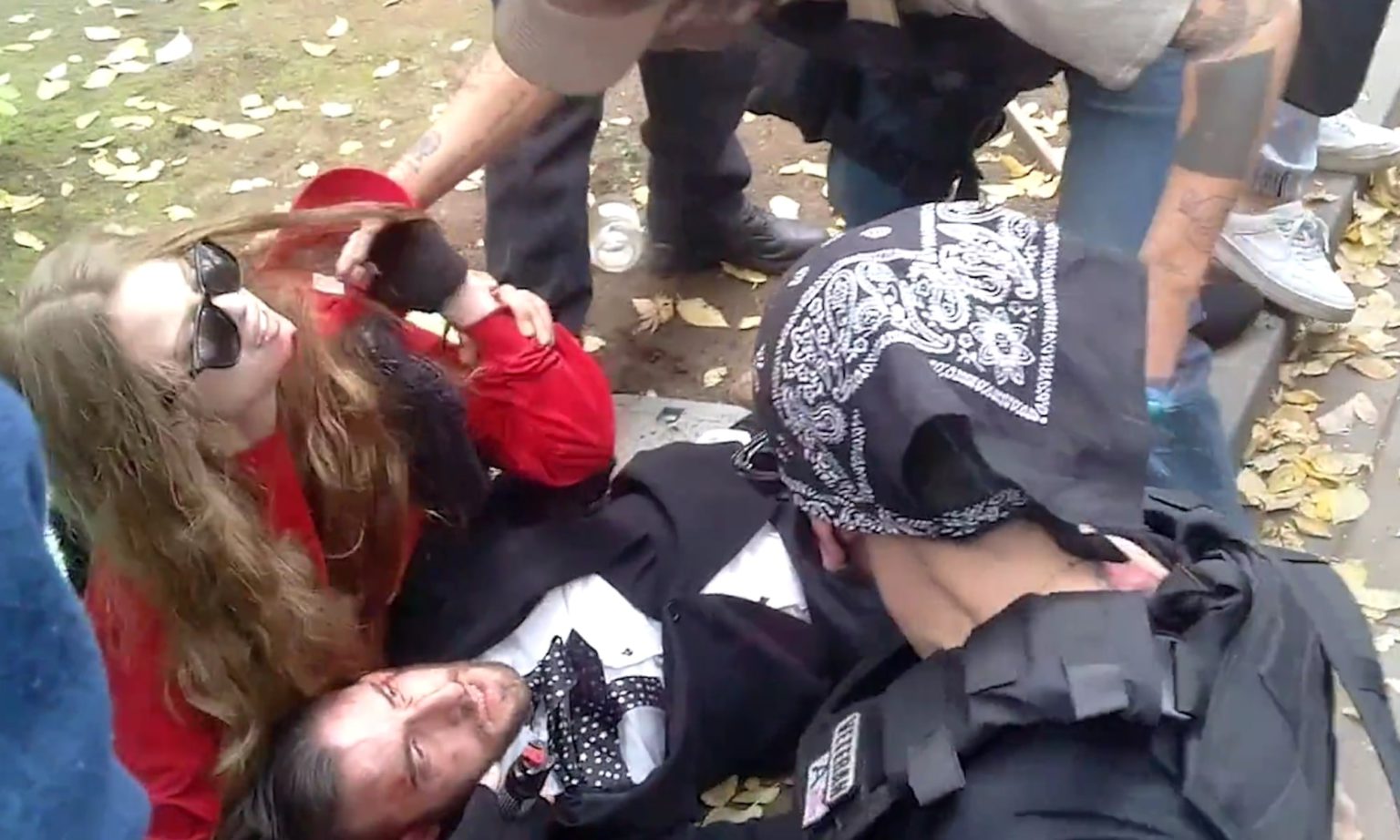 Antifa Sacramento led the attacks on those supporting a MAGA rally at the California Capitol. Antifa-aligned medics then offered help, much to the confusion of the victims. Sacramento, California, 5 December, 2020.

But that evening, the national media, led by CNN, incorrectly reported that ‘dozens of armed protesters’ had amassed outside the Michigan secretary of state’s home. Though media pickups reproducing that story tallied in the dozens, the Detroit city police, the Michigan state police and the right-wing protesters themselves all said that they saw no weapons of any kind. A livestream of the protest also confirmed that the right-wing protesters were unarmed. Why the focus on one incident and not the other?

Similarly, the Capitol riot has been characterised as an ‘armed insurrection’. Yet there were only three arrests for people carrying a weapon without a licence in the Capitol park and on the facility grounds – out of a crowd of tens of thousands. Perhaps this right-wing extremism is far more pedestrian than we imagine. 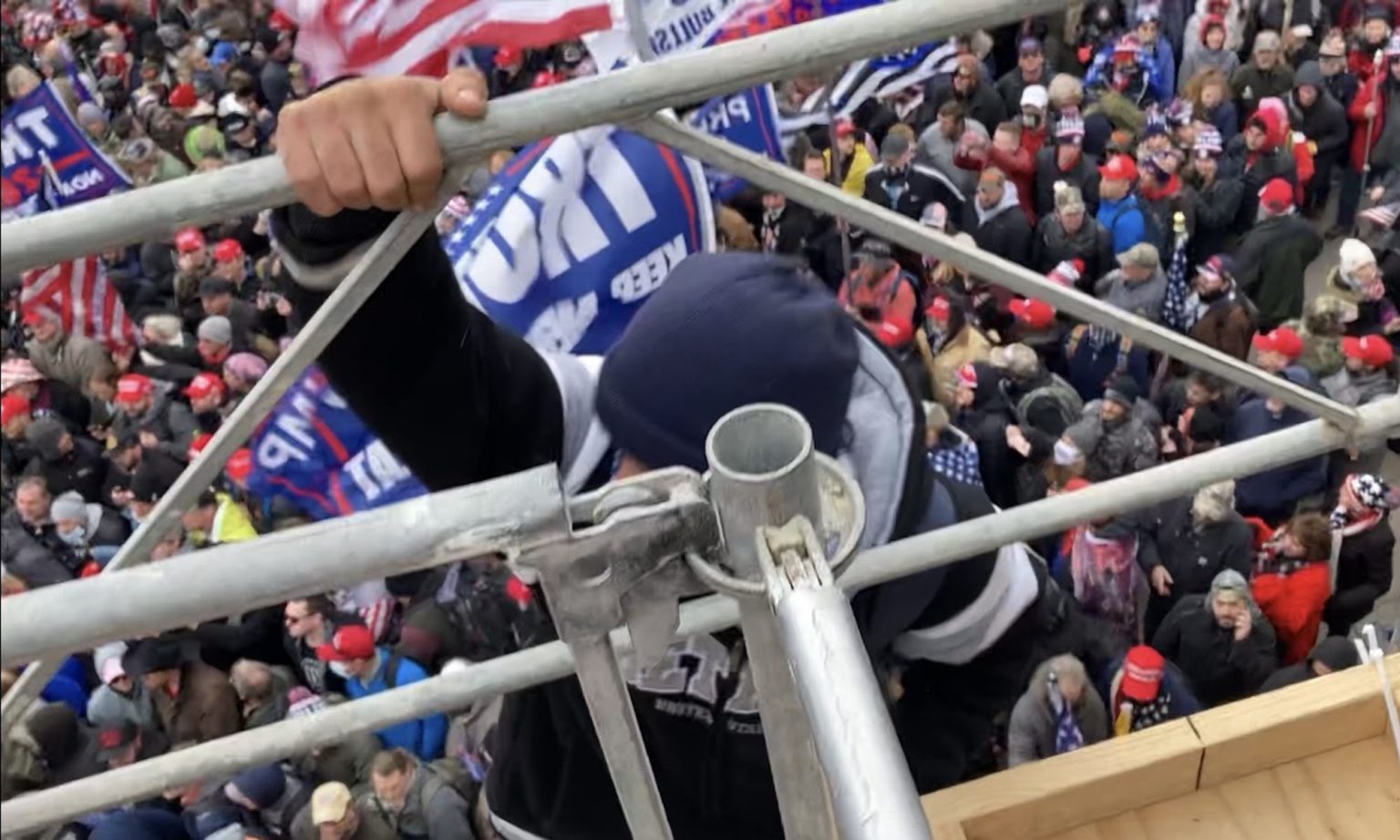 On the day of the Capitol siege, I recorded the aforementioned bullhorn woman poking her head into a room to helicopter advice to those participating in the riot. As frenzied MAGA supporters tore apart furniture to use as an improvised barricade, she barked out what appeared to be the layout of neighbouring rooms. Only one person appeared to be listening to her.

CNN’s initial headline linking to my video still lingers on friends’ Facebook pages: ‘US says Capitol rioters intended to capture and assassinate elected officials.’ CNN later retracted the title. This hyperbolic headline was not the only disputed press talking point about the riot which originated on social media. Empirical truth has been losing out to Twitter truth.

We know violence is cyclical in nature. We didn’t know the reaction from the right would come so soon or be on such a massive scale as the Capitol riot. Yet we saw the same ‘resistance techniques’ on display at the Capitol as we saw in the streets for most of 2020 – the same fruits of autonomous organising. 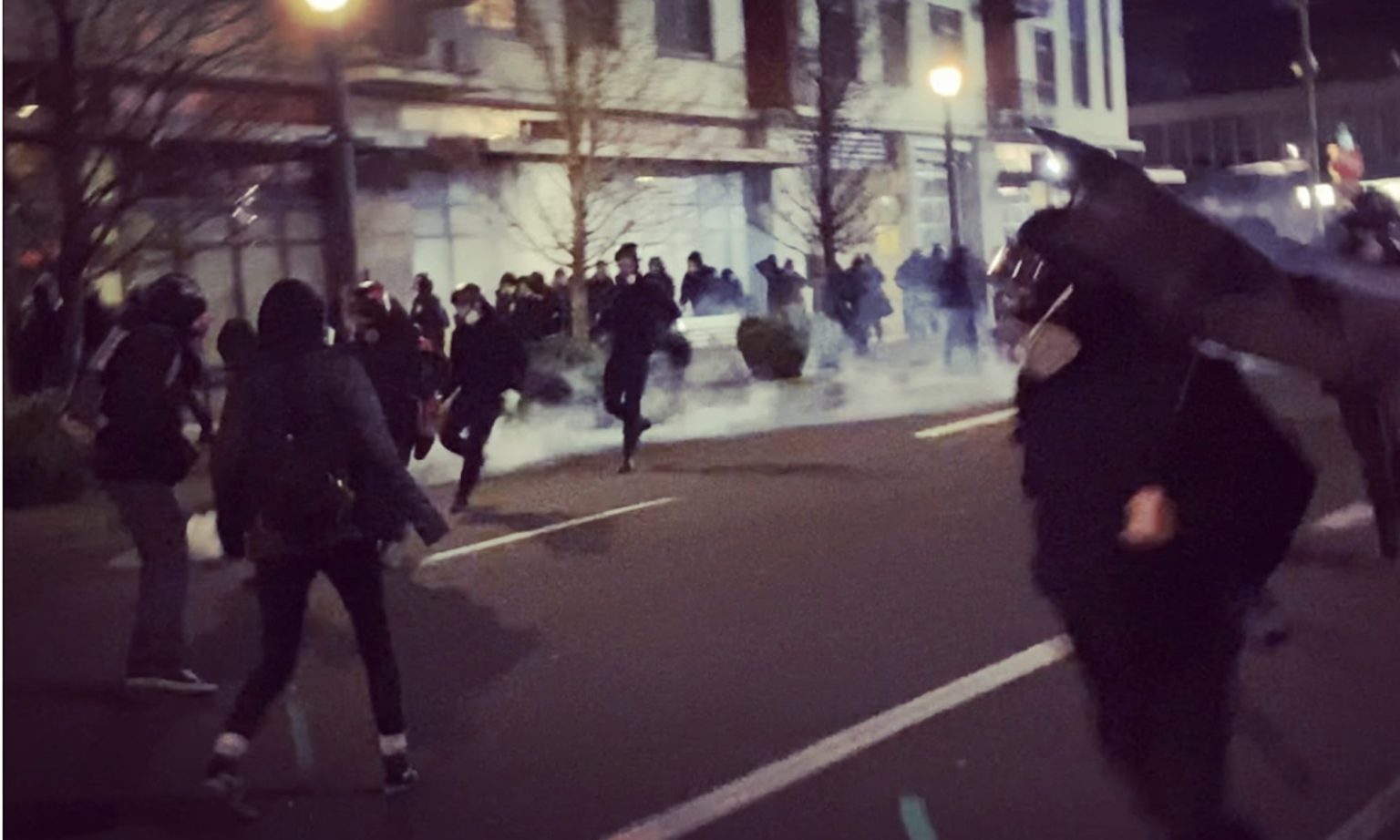 Rioters move in on an ICE facility on the night of Joe Biden’s inauguration. Portland, Oregon. 20 January, 2021.

While the militant left characterises its movement as leaderless, the Capitol rioters were united in their loyalty to Donald Trump. Both movements have taken to the streets in large numbers and reached a critical mass. And they have both taken action that resulted in deaths.

In truth, we don’t need to look far to the right or the left to find militancy and fanaticism.

And with politicians, the press and social media all too willing to distort, cheerlead or turn a blind eye to the extreme sides of our collective political passions, we aren’t just letting this violence foment. We are giving it the environment to thrive in.

Jeremy Lee Quinn is a photojournalist. Find his work at publicreport.org and listen to his Unblocked Podcast.