‘Systemic racism’ is a conspiracy theory 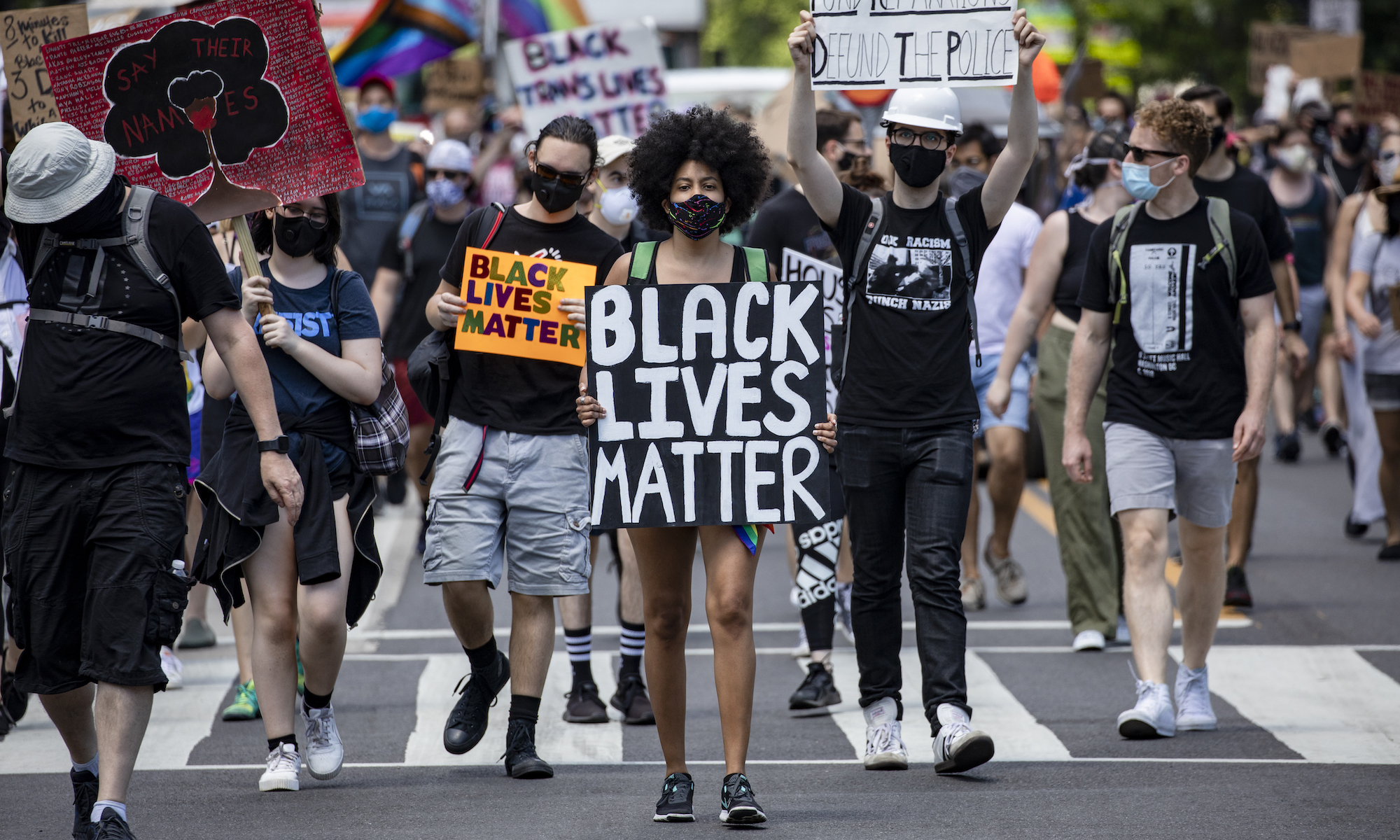 We’ve been hearing a lot lately about conspiracy theories. Obviously, the former US president has provided a Trump Tower-sized target for his critics after telling his supporters that Democrats rigged an election he actually ‘won by a landslide’. Congresswoman and Trump ally Marjorie Taylor Greene has also said some very wacky things, expressing support for the QAnon theory about a cabal of Satanist paedophiles and blaming wildfires on space-based lasers managed by Jewish businesspeople. The Democrats have a wacky fringe as well, represented perhaps most notably by Ilhan Omar, who has famously opined that US support for Israel is due to Jewish money (‘It’s all about the Benjamins’), and who downplayed 9/11 as ‘some people did something’.

Almost forgotten amid the justified mockery of comments like these, however, has been the extraordinarily extensive prevalence of a different sort of conspiracy theory.

The narrative behind movements like Black Lives Matter contends that hundreds – if not thousands – of black Americans are murdered by the state on an annual basis, that harassment and abuse of blacks by whites is constant, and that virtually all gaps in performance between racial groups must reflect hidden racism. These claims are almost universally false. But they have been accepted as conventional wisdom.

The pervasiveness of these ideas – despite the fact they are presented as ‘radical’ and ‘rebellious’ – is truly striking. The infamous (and entirely false) claim that an unarmed black male is ‘murdered’ by US police roughly once a day has been repeated by numerous BLM activists. A book called Open Season: the Legalised Genocide of Coloured People has become a bestseller.

The ‘all gaps stem from racism’ point has made the career of Dr Ibram X Kendi, author of such works as How to be an Antiracist and Antiracist Baby. Kendi specifically contends that any large-group performance gap has to be due to racism. Twitter CEO Jack Dorsey recently gifted Dr Kendi with a $10million bequest, to help him share arguments like this with an even larger audience.

I have tackled the first two prongs of the BLM argument in other essays on spiked, so I will focus on the third prong. With all due respect to Dr Kendi, it is simply not the case that any gap in performance (such as SAT scores) between two populations has to be due to racism. In fact, while no one denies some bigotry endures, it is remarkable that an argument so demonstrably untrue has reached such an uncritical level of near-global acceptance. As Thomas Sowell pointed out literally decades ago, groups which vary in terms of major traits like race (or sex) also often vary in terms of almost everything else. One group might simply study more for the SAT than most others, for cultural reasons – and adjusting for this sort of thing almost always reduces or eliminates the massive gaps which some would like to attribute to racism.

Exactly this sort of adjustment has been done, often and well, in the context of race in the US. Thirty years ago, economist June O’Neill unpacked a well-known ratio of 82:100 for the earnings of black vs white men. Less technically put, black guys made about 80 cents for each dollar that white guys earned. This gap was – then as now – almost universally attributed to racism. But O’Neill pointed out that simply adjusting for variables like median age, where someone lives and years of education closed the gap substantially.

Adding tested IQ to the equation closed the ratio to 95.5:100, and adjusting for years of work experience (which is closely related to age) closed it to 99.1:100. O’Neill followed up this research in 2005, finding similar results. Controversial as it sounds in our hyper-politicised society, people of different races with the same qualifications succeed to roughly the same degree today. While few would deny that proportionately more black Americans are poor today because of past conflict and oppression, the effect of contemporary racism seems to be in the order of a few percentage points.

The body of further evidence supporting the conclusion that group performance is not largely a result of racism is truly massive. Perhaps most obviously, most of the highest-performing groups in the United States are not white. As per the 2019 American Community Survey, the wealthiest group of Americans is not Anglo-Saxon ‘WASPs’ – or Jews as is often claimed – but Indian Americans, with a median household income of $135,816. Taiwanese Americans come in second place, at $102,405. All in all, seven of the 10 highest-earning groups – Indians, Taiwanese, Filipinos, Indonesians, Pakistanis, Iranians and Lebanese Americans – are not ‘white’ as this term is generally conceptualised. Another Top 10 group – South Africans, with $98,212 – consists of white and black immigrants, who both seem to do quite well away from their homeland’s quarrels.

In fact, quite a few black or majority-black groups are ahead of the average income for US whites ($65,902). Ghanaian Americans bring home a healthy $69,021 annually, Nigerians earn $68,658 and Guyanese Americans make $67,772 on average.

A number of black groups, while not high earners, earn more than some large and mostly (if not entirely) white groups like Cajuns ($52,866) and those who identify their race simply as ‘American’ ($58,601). Remarkably, the average income for Ghanaian Americans, a group composed largely of recent immigrants, was roughly $26,000 higher than the average income ($43,862) for native-born African-American households.

The figure for Cajuns illustrates another critical point that the conspiracy theorists seem to avoid actively: incomes vary by up to 300 per cent just among white groups. In 2019, the highest-earning white group (perhaps surprisingly) was Australian Americans, who made $100,856 per household per year. In contrast, the poorest – with Scots-Irish ‘Appalachians’ not separated out – was the sizable but insular population of Pennsylvania Dutch Americans, who averaged roughly $49,000. The low incomes of Dutchmen is down to their isolation, faith tradition, educational performance, and so on – and those things matter for all people, regardless of race.

Wonky data aside, a second problem with the ‘hidden evil’ narrative is how incredibly insulting it is to most Americans. The complaint that ‘microaggressions’ and ‘implicit bias’ contribute to racial oppression implies that many or most of my fellow citizens are extraordinarily bigoted, and are either lying to me about this while pretending to be my friends or are completely lacking in self-awareness. But, aside from the self-serving, worthless results of implicit-bias tests, there is very little evidence that this is actually the case.

Another obvious point (though it is taboo to say it) is that we have massive, society-wide programmes of positive discrimination to compensate for even residual racism of this kind. For all of today’s incessant talk about ‘white privilege’, institutional campaigns of affirmative action, designed to counter the lingering effects of discrimination, have been in place in the US since 1967’s Philadelphia Plan. A (non-Asian) person of colour applying for an academic slot or Fortune 500 job very often has a measurable advantage over an equally qualified white guy, when we compare apples to apples.

This is not some vague, theoretical point. In 2017, mean-average scores on the American SAT were 941 for black Americans, 963 for Native Americans, 987 for Latinos, and 986 for Samoans and other Pacific Islanders, but were 1,118 for whites and 1,181 for Asian Americans. Assuming each group took the test proportionately, these results would logically give a black applicant a 177-point edge over a white applicant, and a remarkable 240-point edge over an Asian applicant when seeking admission to any university that wants a campus that ‘looks like America’.

Racism obviously exists, but affirmative action of this kind obviously exists as well, and US income figures show that plain hard work is rewarded across a whole rainbow of different groups. Perfection is not possible, and the word ‘utopia’ itself means ‘no place’. But when we put the wilder speculations of the left and the hard right aside and look at the data, it really does seem that most people in America are rewarded for how well they perform.