It is entirely legitimate to compare Britain’s pro-EU elites with the pro-Trump mob that stormed the Capitol. 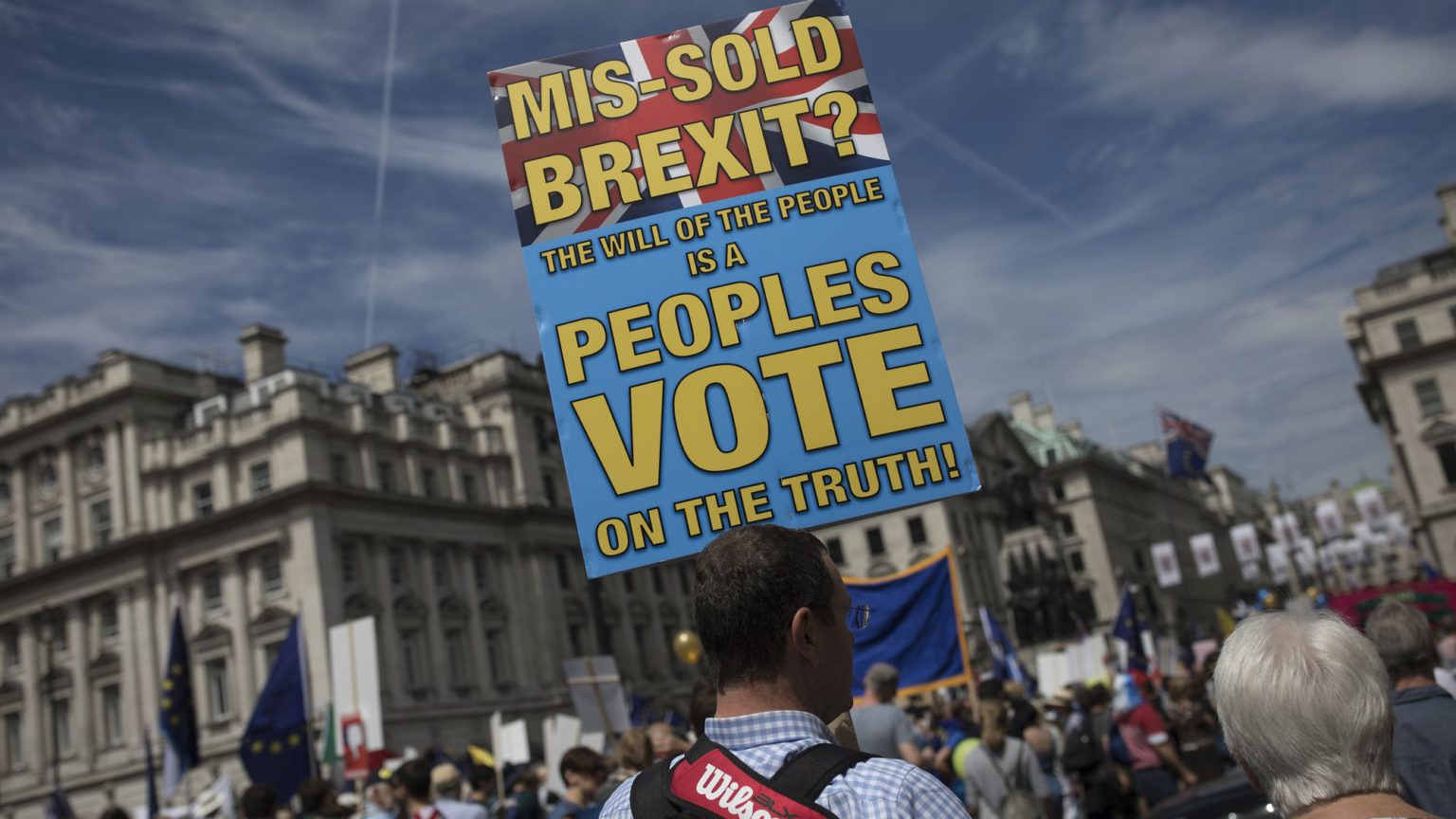 The Remoaner doth protest too much. Yesterday, for hours, some of the chief agitators in the anti-Brexit lobby railed against the suggestion that their four-year effort to trash a democratic vote has anything in common with the pro-Trump mob’s four-hour effort to block a democratic vote at the Capitol Building in Washington, DC yesterday. ‘How very dare you!’, they cried at anyone who raised the possibility that, violence and dress sense to one side, our very own Remoaners are not that different from the morons who breached the Capitol. Their defensive cries of innocence give them away. They know there is truth – a whole lot of truth – in this comparison.

It was a senior Welsh Conservative politician who forced Remainers to deny that their war on democracy is anything like the Capitol invaders’ war on democracy. Andrew RT Davies, a former leader of the Welsh Conservatives, tweeted a response to Keir Starmer’s denunciation of the Capitol Building mob. Davies said: ‘To be honest I’m not sure you’re in the strongest position right now given you campaigned to overturn democracy and the will of the British people.’ He didn’t stop there. He then fired off a tweet to a Welsh Labour politician that said: ‘The scenes in Washington are a disgrace as I’ve said and all stem from politicians – like your good self – who refuse to accept the results of democratic elections.’

Cue fury. How dare this Tory compare the tens of thousands of angry people who regularly gathered outside the Commons to scream for the destruction of the 17.4million votes for Brexit to the mob of angry Trumpites who gathered in the Capitol to demand the destruction of the 81million votes for Joe Biden? Labour MP Chris Bryant, an arch Remainer, insisted that ‘equating democratic political debate with an armed, violent assault on the Capitol validates violence’. What a deft Orwellian move – depicting politicians’ and campaigners’ four-year effort to trash the largest democratic vote in UK history as ‘democratic debate’.

Another Labour MP, Mark Tami, barked: ‘Disgraceful. No serious politician, no serious person, would equate armed idiots attacking lawmakers with political debate.’ Neither would a serious person describe the enormous legal, political and economic pressure that was wielded to the end of voiding the 17.4million votes for Brexit as ‘political debate’, and yet here we are. Labour MPs like Angela Rayner piled in on Mr Davies and demanded that he be reprimanded for his comments. And lo, the Tory Party, still missing a backbone, announced that it was writing to Mr Davies and initiating an investigation of his comments.

If it’s an honest, reasoned investigation, its conclusion will surely be this: Mr Davies was absolutely right in everything he said. Of course there are similarities between Remain agitators and the Trumpite mob. Both are in the business of preventing the enactment of a free, fair democratic vote. Both trade in conspiracy theories about how recent elections were ‘stolen’ – the 2020 presidential election was apparently stolen from Trump by dodgy voting machines from Venezuela, or something, while the 2016 EU referendum was apparently stolen from Remainers by Cambridge Analytica and Russia.

Both are in a state of revolt against one of the most important principles in a democracy: losers’ consent, the necessity of the losing side to accept the outcome. And both cleave to a grating narrative of grievance, viewing themselves as the heroic victims of dastardly powerful forces and really stupid people – the pro-Trump mob thinks Commies nabbed their right to rule, while Remoaners think a throng of little-minded Little Englanders screwed up everything and turned the UK into Farageland.

‘But’, Remainers plead, ‘we never stormed parliament!’. This is hilarious on so many levels. First off, imagine if the only way you could distinguish yourself from an anti-democratic mob in the US was essentially by saying: ‘Well, my anti-democratic mob didn’t smash any windows, did it?’ That in itself should solicit some serious self-reflection on the part of the Remoan lobby. And secondly, of course our very own anti-democratic mob didn’t storm the citadels of power. They didn’t have to. The Commons, and, even more so, the Lords, were full to bursting between 2017 and 2019 with politicians who shared their contempt for Brexit and their determination to thwart or obstruct it. The barbarians didn’t have to breach the gates of power in the UK because they were inside the gates, on the green and red benches, devoting their every watt of energy to blocking the peaceful transition of power from EU membership to EU non-membership.

Sure, Remian agitators didn’t use or threaten violence, as the despicable invaders of the Capitol Building did. But they did gather in massive numbers to demand the voiding of their fellow citizens’ votes. I attended most of the ‘People’s Vote’ marches (merely to observe, of course). ‘People’s Vote’ was an Orwellian phrase; it was actually a campaign to overthrow the people’s vote for Brexit and to hold a second referendum. If successful, it would have been the first time in British history that a democratic vote was not given force in law.

And at these marches I saw thousands of placards expressing contempt for the ignorant public. I heard people openly say the referendum had been ‘stolen’. I heard conspiracy theories about foreign elements corrupting Brits’ minds. That’s why, when I saw the vile behaviour of the mob at the Capitol Building, it felt familiar to me – I had seen this arrogant, conspiratorial loathing for democratic norms before.

It is important to restate all of this, not to get one over on Remoaners, but because there is now a conscious effort to rewrite recent British history. Campaigners and politicians who devoted much of the past four years to undermining the democratic institutions and ideals of this country are now trying to whitewash what they did. It was just ‘democratic debate’, they say. ‘It isn’t anti-democratic to call for another vote’, they lie, knowing full well that it is the very definition of anti-democracy to hold a second vote before the first vote has taken effect.

Labour MPs who stabbed their working-class, Brexit-supporting voters in the back by supporting a second-referendum campaign that would have voided the votes these people cast in 2016 now say: ‘We were just trying to work out what kind of Brexit would have been best.’ Corbynistas who lined up with the neoliberal elites against the British people, shamefully supporting the second-referendum outrage, are trying to airbrush their duplicitous behaviour from the record. It was the hardcore Remainers who forced us to support a second referendum, they cry, compounding their ignoble political behaviour by refusing even to take personal responsibility for their decision to align with neoliberalism against the electorate.

This matters because the truth matters. The historical record matters. It matters that we remember just how fragile democracy in this country is. It is so fragile that it was almost overthrown on numerous occasions over the past four years. The Remainer elite’s defensive, hollow bristling at the comparisons between them and the Capitol Building mob is another effort to rewrite history, to memory-hole their extraordinary campaign against the people’s will, and that is why it must be challenged. They are like that mob in Washington. What we have essentially witnessed over the past 24 hours is high-status liberals who spent four years undermining the institutions of democracy railing against low-status Trump supporters for spending a few hours doing the same thing in a more disturbing, violent way. This is something more than hypocrisy. It is erasure of historical truth. And that must never go unchallenged.