‘Respectable’ Remainers are trying to distance themselves from the bigoted crusade against Brexit voters. 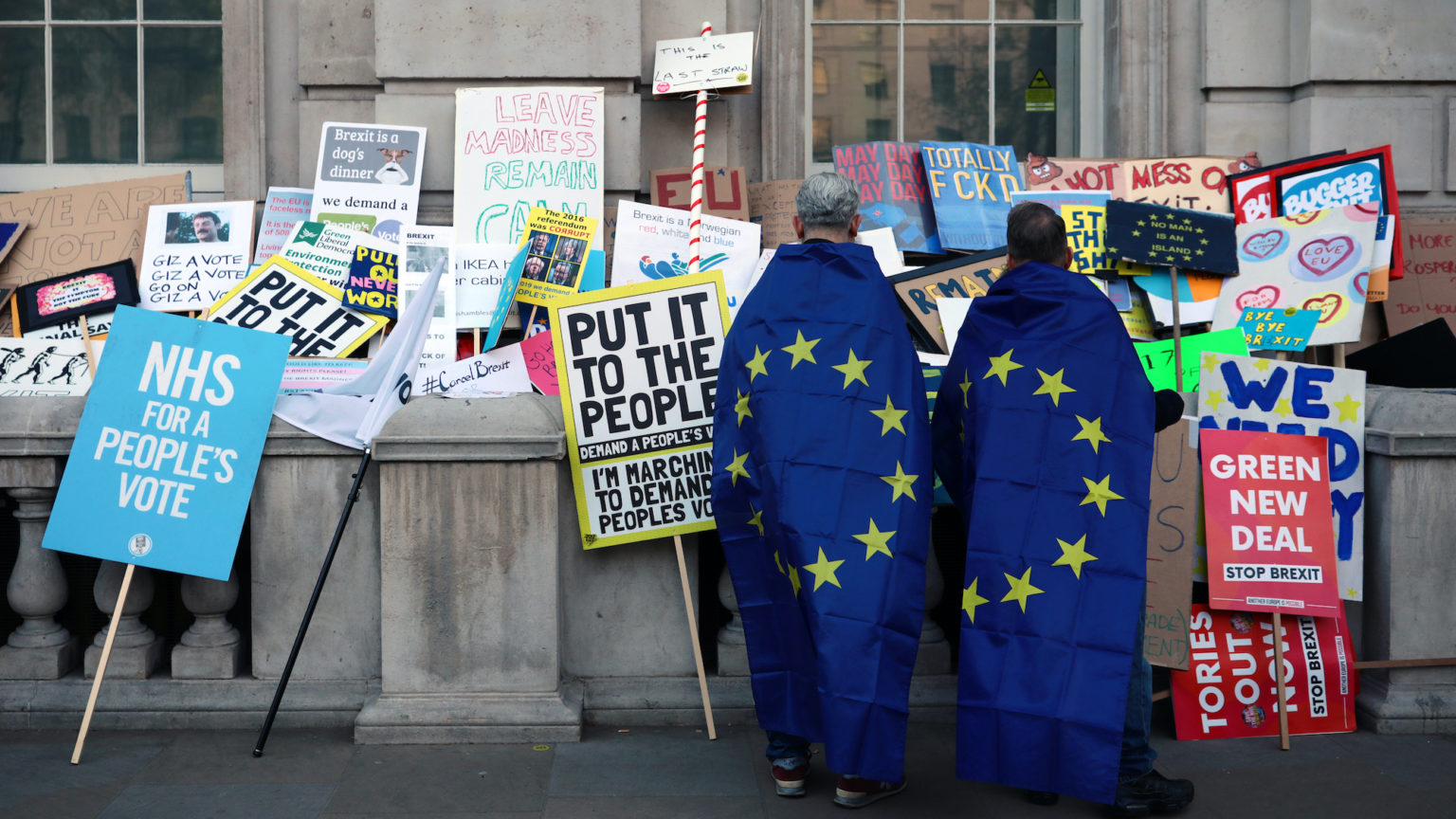 A civil war has erupted in Remainia. The people who devoted their every waking moment since 2016 to the task of overthrowing the largest democratic vote in the history of this country – the vote for Brexit – are now at each other’s throats. Which is preferable, I guess, to their being at the throat of Brexit, which is where they spent much of the past four years, their hands wrapped tightly round the neck of British democracy. And yet their new spat, their hopefully internecine clash over which of them is responsible for the failures of the Remain project, is depressingly unenlightening. Indeed, it confuses more than it clarifies.

The conflict was ignited by arch Remainer Peter Mandelson in a semi mea culpa published in the Guardian. His argument is that hardline Remainers like him must shoulder some of the responsibility for the Hard Brexit we seem to be heading for (whether we are actually heading for a ‘Hard Brexit’ – or what some of us prefer to call ‘fully freeing ourselves from the EU and all of its rules and regulations’ – is a matter for another column). Of course, says Mandelson, those dastardly Tory Brexiteers are mostly to blame for this ‘Hard Brexit’, but we Remainers must self-reflect too. Hard Brexit is the ‘price the rest of us in the pro-EU camp will pay for trying, in the years following 2016, to reverse the referendum decision rather than achieve the least damaging form of Brexit’, he says.

Mandelson’s commentary has exploded like a hand grenade in the cosy, smug world of Remainia. For a start, his confession that the Remainer elites did indeed spend four years trying to ‘reverse the referendum decision’ – that is, trying to void the votes of 17.4million citizens, including millions of working-class people and eight million women – has stuck in the craw of some Remoaners. These people still seem, hilariously, to be labouring under the illusion that they did not actually spend four years waging war on democracy, but rather were just trying to put a stop to an ‘advisory’ proposal from a section of the population that had been misled by lies, misinformation and Russia, yada yada. In this sense Mandelson’s frank confession of anti-democracy is useful. This is a Remainer stating out loud what us Leavers have always known – that the Remainer elites devoted themselves to the bigoted, reactionary project of crushing the votes of millions of their fellow citizens.

Mandelson’s confession that his ‘pro-EU camp’ acted against democracy comes at a particularly bad time for the Remain-leaning liberal commentariat. Many of them are currently looking in horror at the Trump camp’s insistence that the presidential election was fraudulent; that Joe Biden didn’t really win; that foreign elements (Venezuela?) may have had a hand in this political atrocity. But of course they themselves have already done all of these things, and on a far grander scale than the ‘rednecks’ they love to mock. These polite, educated Guardian-reading Remainers looking down their noses at vulgar Trumpites for trying to void an election result make those Trumpites look like rank amateurs. They were Trump on steroids for four whole years. Mandelson has reminded them of that, and they do not like it.

Yet there is a problem with Mandelson’s core claim, which has since been echoed by other Remainers – namely, that it was the crankier Remainers who screwed things up and unwittingly helped to propel us towards the ‘cliff edge’ of Hard Brexit. In eschewing any kind of Brexit, even ‘the least damaging form’, these people helped to make Hard Brexit more likely, he says. James Kirkup in the Spectator agrees. Hard Remainers were the ‘swivel-eyed loons of progressive politics’, he says. The ‘Remain zeal’ of ‘FBPE Remainers’ helped to ‘kill Soft Brexit’, apparently.

This view of a nutty fringe ruining the more moderate aspirations of the ‘Soft Brexit’ lobby is echoed by Corbynistas, too. Owen Jones, who backed Labour’s catastrophic, anti-working-class second-referendum policy, sides with the Mandelson view, arguing that ‘hard Remainers wouldn’t accept a Soft Brexit’ and now we are all ‘paying the price’. ‘We should have settled and fought for the closest possible relationship with the EU’, he says, that ‘we’ indicating just how thoroughly the Corbynista movement threw its lot in with the neoliberal elites from 2019 onwards. The capitalist class and its supposed implacable opponents in the Corbyn camp united in 2019 around a policy of defeating and burying the working-class revolt against the neoliberal EU.

There is something very off in this sudden rush to pin the blame for the current moment on the ‘swivel-eyed loons’ of the hardcore Remain camp. First off, as people should know from David Cameron’s experience when he wrote off UKIP and its supporters as ‘mad, swivel-eyed loons’, such language is rarely helpful in political life. True, if that epithet could legitimately be attached to anyone in contemporary Britain, it would be hardline Remainers, who are among the most unpleasant political activists of recent times. However, the problem with pointing the finger of blame at these ‘loons’ is that it smacks of scapegoating, a way of blaming the shocking scourge of anti-democracy of the past four years on relatively small numbers of obsessively pro-EU agitators. This lets off the hook the broader, supposedly more moderate establishment, which clearly wants to water down its own role in the bigoted crusade against our democratic rights over the past four years.

Far be it from me to defend the Remainer zealots that people like Mandelson and Kirkup are criticising. These people have indeed played an incredibly destructive role in British politics. They were fuelled less by love for the EU – no one loves the EU – than by hatred for the apparently ignorant British masses. Their classist contempt for certain voters, and by extension for the entire idea of democracy, was readily apparent in the hateful placards they waved on their demonstrations (accusing voters of being thick, of being brainwashed, etc) and in the warped pleasure they derived from every rumour of economic difficulty as a result of our leaving the EU (‘That’ll teach those stupid poor people!’).

I’ve received emails from these kinds of people at 2 in the morning calling me a fascist. I was accosted by a group of them in central London telling me that stupid voters didn’t know what they were voting for. I’ve witnessed these people swarming around an elderly gentleman who was carrying a pro-Brexit banner near Westminster and calling him a cunt, a Nazi, scum. Remain zealots have been a pox on political life since 2016.

And yet – the turn against these ‘swivel-eyed loons’ by both self-styled respectable Remainers like Peter Mandelson and so-called radicals in the Corbynista camp feels cynical and opportunistic. It looks like an effort to relieve the wider establishment of responsibility for the atrocious assault on democracy that has occurred since 2016. It was only a few extremists who wanted to block the wishes of the people; the rest of us were more open to compromise and to ‘softening’ Brexit rather than overthrowing it – that’s their story. It’s a lie. If anything, moderate Remainers, with their slippery, Orwellian language about ‘Soft Brexit’ and their extraordinary influence in parliament, business and the media, played a far more central role in the reactionary assault on democracy than FBPE ‘loons’ did.

A sense of shame seems to have crept into some middle-class circles. From the Blairite camp inhabited by the likes of Mandelson to the Corbyn camp inhabited by Jones and others, a rewriting of history is taking place. Belatedly mortified, perhaps, by their part in the most grave attack on democracy since we all got the franchise in 1928, these people are now softening their own role – Jones says he was a reluctant supporter of Labour’s policy of overthrowing millions of working-class votes; Mandelson is distancing himself from the People’s Vote mob – and exaggerating the role of the fringe elements. Their turn against the FBPE mob is an effort to wash away their own sins and to restore their own reputations in the world of political democracy.

In truth, of course, it wasn’t just hateful people with blue-painted faces who threatened to destroy the democratic fabric in this country. It was the political and media classes in their broadest sense. The business world, a majority of MPs, the liberal media, the legal establishment, the academy, the middle-class membership of the Labour Party – all played their part in the revolt of the elites against the people. They may have used the language of ‘Soft Brexit’ rather than ‘STOP Brexit’, but their aim was the same – to dilute the democratic cry of the people and ensure that the UK remained partially beholden to the stipulations of the EU oligarchy. They acted against the wishes of the people, openly. The war on democracy was an establishment endeavour, not a fringe one.

Their shame has come too late. I know that many Remainers think the people are stupid, but we aren’t. We will remember their reactionary crusade against the vote for Brexit and the elitism, classism and sometimes outright hatred that accompanied it. We will remember this not in order to bear a grudge against those who tried to deprive people of the only public voice they have – the vote – but in order to keep reminding ourselves how fragile democracy remains. Vigilance will be essential in the 2020s if we are to guard the people’s democratic rights against both ‘swivel-eyed loons’ and the more well-spoken, supposedly moderate enemies of democracy.