We need to talk about Ellen Page

I’m sorry, but a woman cannot just click her fingers and become a ‘he’. 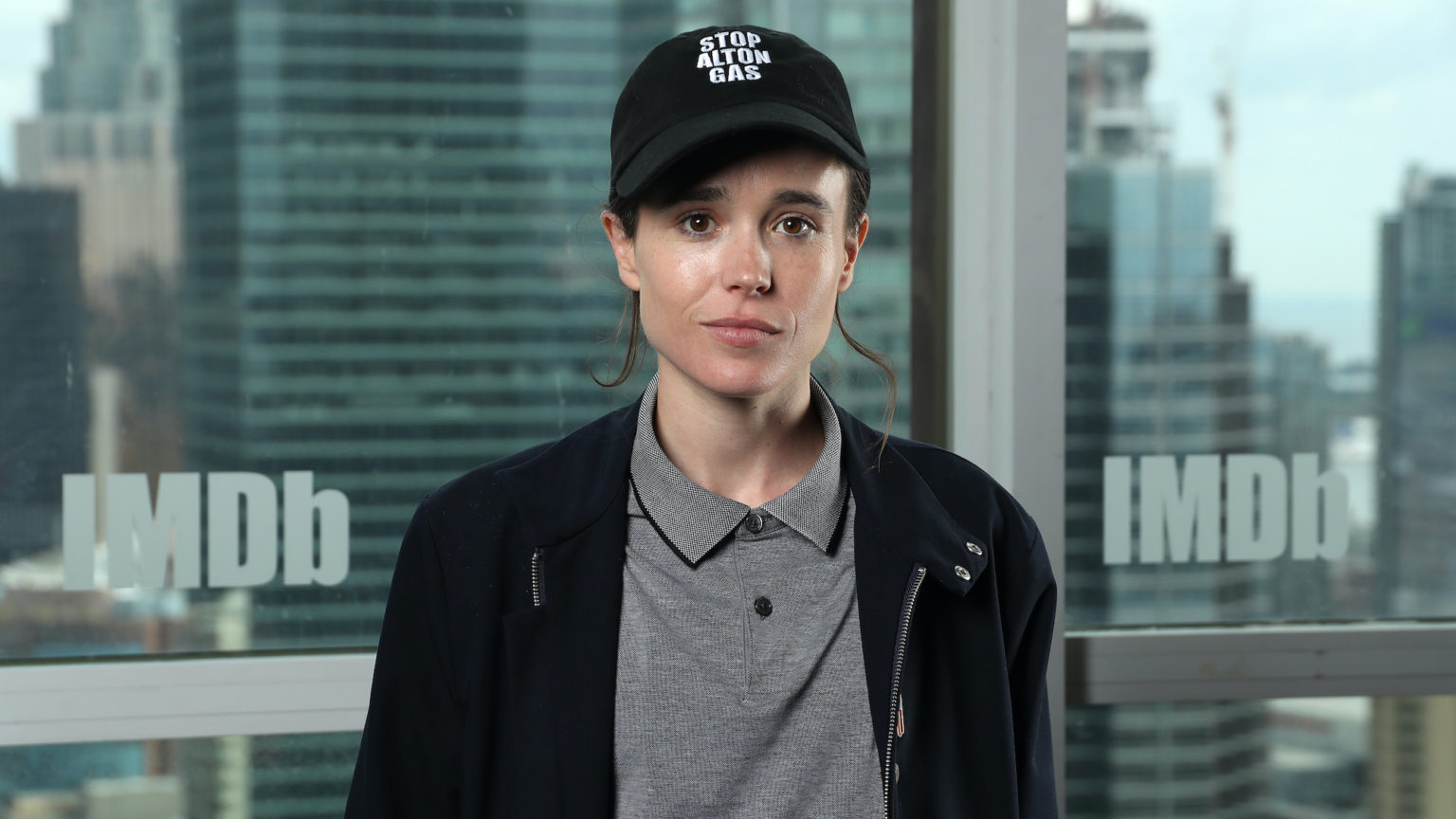 So that’s it, is it? Ellen Page is no more? She’s been disappeared? She’s been shoved down the memory hole, left to stalk that netherworld of people whose names must never be uttered out loud, like Bruce Jenner, Frank Maloney, Voldemort? Ellen Page, the actress most famous for starring in irritant quirkhouse movie Juno, has now declared that she is Elliot Page and that she’s a he. And, boom, just like that, Ellen’s gone. She’s being erased from film history. People are getting into trouble even for saying the word ‘Ellen’. ‘Who?’, woke identitarians ask, as if they’ve all gone mad.

We need to talk about this. Specifically we need to talk about Ellen Page. We need to talk about the fact that this woman – yes, woman – existed in public life and in the celluloid imagination for many years, and that can’t just be scrubbed from the record, Soviet-style. Yesterday, Ellen issued a statement saying she is now Elliot and her pronouns are he and they. That’s just bad grammar. Swiftly, slavishly even, the establishment media and the film world rushed to erase Ellen, the movie star of a decade’s standing. It’s like she never existed. From IMDb to Wikipedia, it’s all Elliot. ‘Elliot Page is a Canadian actor’, Wikipedia tells us. Where’s Ellen gone?

With eye-swivelling speed, Ellen was erased. IMDb now tells us that the lead star of Juno (2007) was Elliot Page (though in parenthesis it says, rather riskily, ‘as Ellen Page’). Juno was ‘their breakout role’, it says. But it wasn’t ‘their’ breakout role. It was Ellen Page’s. We all saw the movie. It was about a teenage girl who got pregnant. Elliot Page didn’t play that teenage girl any more than Caitlyn Jenner won gold in the decathlon at the 1976 Olympics. It was Ellen, and the gold-medal winner was Bruce. Although if you ask Google ‘Who won gold in the decathlon at Montreal in 1976?’, it says: ‘Caitlyn Jenner.’ Which is a lie. They’re lying about the past now.

The strength of the trans ideology was confirmed by the swiftness with which media institutions turned Ellen into Elliot and started calling her ‘he’. They had to, I guess, given the fury that will be visited upon anyone who says ‘Ellen’ or ‘she’. How dare you mention that mere woman who we have all agreed to erase from the historical record? Trans campaign groups have instructed the media to stop ‘deadnaming’ Page. ‘Deadnaming’ is a neo-Orwellian word used to publicly shame anyone who utters names, or facts, that the woke elites have agreed to put in the memory hole. ‘Ellen Page’, ‘Bruce Jenner won gold’, ‘born a male’, ‘born a female’ – these are all now deadnaming thoughtcrimes.

The policing of discussion about Ellen Page is already intense. The Transgender Journalist Association says it is unacceptable for any media outlet even to mention the word ‘Ellen’. Even saying ‘Elliot Page, formerly known as Ellen Page’ is a no-no according to these jumped-up guardians of correct thought. Teen Vogue, the wokest magazine in Christendom, was praised for not mentioning Ellen Page anywhere in its report about Elliot Page. Well done! You completely erased a woman who did some very important cinematic work over the past 15 years!

The disappearing of Ellen Page, and the demonisation of anyone who dares to mention that woman’s name, matters because it tells us a great deal about the increasing instability and elitism of identity politics. There are many reasons we should have a frank, legitimate discussion about Ellen Page rather than robotically repeating that she is now a he and that anyone who says otherwise is a moral reprobate. First, is it really the case that Page is male? A he? How can someone who doesn’t have male biology and who has had no male experiences – boyhood, male puberty, masculine impulses, being a brother, an uncle, a father – be a ‘he’? How does that work? Is it magic? Or have words like male, he, brother and father been so denuded of meaning thanks to the cult of genderfluidity that anyone can adopt them as their preferred identity? It is not prejudiced to ask these questions; it is reasonable, and important.

Secondly, there’s the question of what is happening to lesbians in the era of transgenderism. Six years ago, Page came out as a lesbian. Now she’s saying she’s male. At a time when there is growing pressure on young lesbians to consider the possibility that they are trapped in the ‘wrong body’ and that they might in fact be men – just consider the case of Keira Bell, covered on spiked yesterday – is the birth of Elliot Page really as positive as the media are making out? Could it not further confuse young lesbians and make some wonder if their sexual preferences and possibly tomboyish attitude also means they are a ‘he’? That’s one of the dark ironies of the cult of transgenderism: it has had a negative impact on young gay people, more and more of whom now wonder if they should irreversibly transform their bodies in order to make them conform with their ‘sexual brain’, whatever that is.

And thirdly, there’s the issue of democratic discussion, of democratic public life, of what the rest of us think and believe. The transgender fad captures just how atomising, anti-democratic and elitist identity politics has become. The idea is that an individual can be whatever he or she wants to be, and everyone else must – absolutely must – bow down to their view of themselves. So a female journalist who gave birth to a child insists that we all agree she is the child’s father. Sam Smith insists we call him ‘they’, even though that makes no sense – he is one person, not many people. Trans writer Paris Lees says we must all accept that ‘Caitlyn [Jenner] has always been a woman. Yes, even when they were “fathering” children.’ And now you are congratulated if you say that Ellen Page – a diminutive actress who plays female roles – is a ‘he’. Always has been. Erase Ellen from your memory, OKAY?

But what about us, the people who also inhabit this world? What about our recognition, springing from millennia of observation, that if you give birth you are a mother, not a father? What about our understanding that if you produce sperm and impregnate someone – as Bruce Jenner did – then you are a man, not a woman? What about our belief that using the word ‘he’ to refer to someone who is clearly a woman is odd? And our recognition that even if we agree to do it, we still don’t believe it; we still know it’s a dishonest performance we have been pressured into?

Do we matter? It seems not. The elitism of identitarianism is exposed in its commitment to overriding what society at large understands and believes, all those facts and customs we adhere to, and in its demand that we lie – that we say Caitlyn Jenner won a gold medal and that Ellen Page is male. Surely it’s time more of us stood up and said that, in their private lives, people can refer to themselves however they please, but in our public world, in the space we all share as citizens guided by knowledge, beliefs and traditions, truth matters; we matter. The cult of transgenderism isn’t liberation. All it does is allow individuals to ‘liberate’ themselves from reality while heaping pressure on the rest of us to deny the truth, to silence our own knowledge, to lie to ourselves and to others. That is the opposite of freedom. Sorry, Ellen.