Why Maradona was the greatest

A ‘people’s champion’ who won the World Cup on one leg. 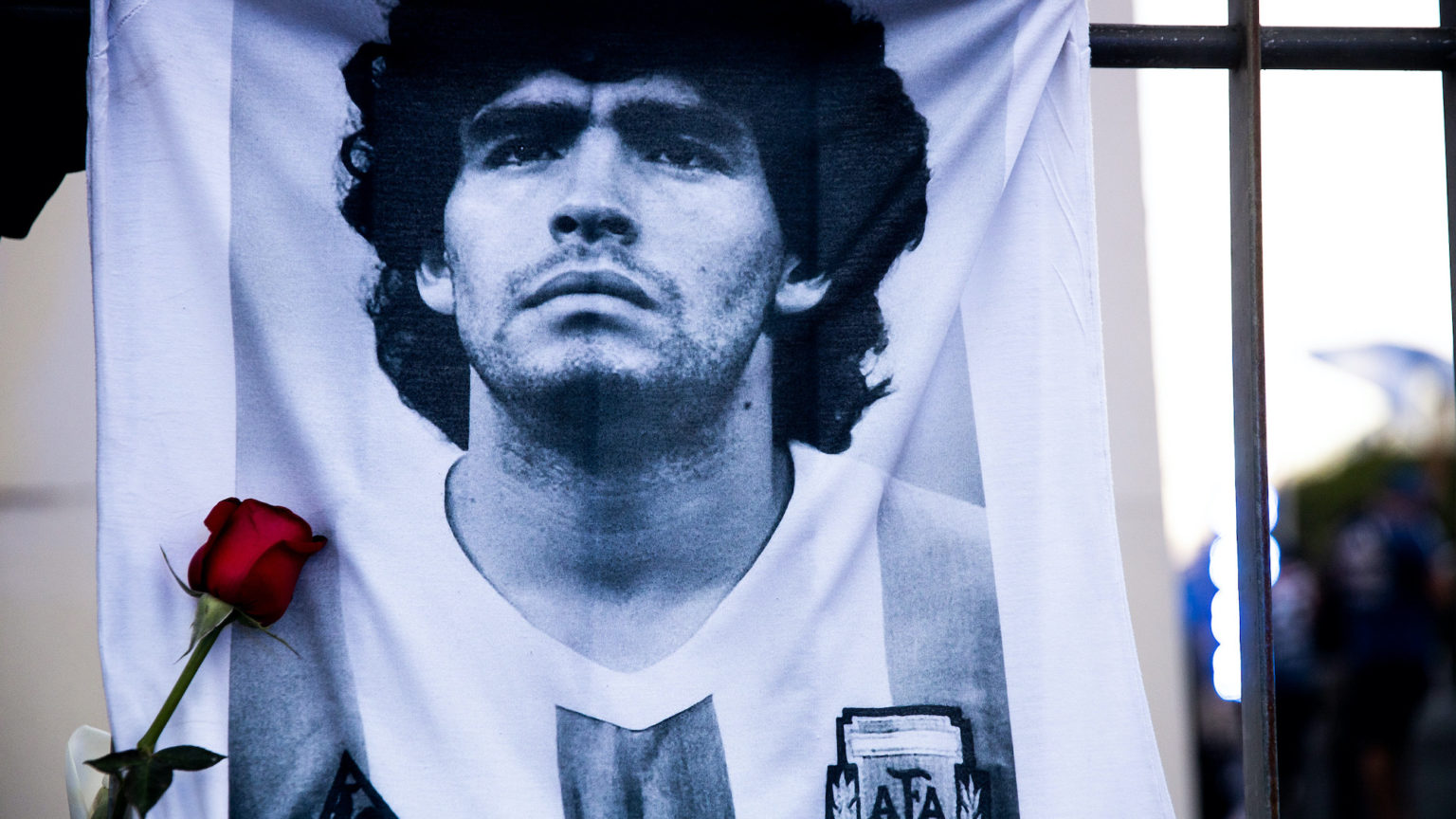 Diego Maradona was the greatest footballer of all time, and the nearest thing the beautiful game has ever had to a Muhammad Ali. For all the official tributes lavished on Maradona since his death, Diego was reviled by the football establishment in his prime – but always loved by millions of fans in Argentina and worldwide who saw the brilliant, bolshy little terror as both a genius and one of their own.

Gary Lineker, the self-appointed Twitter conscience of English football, fed many news headlines with his heartfelt tribute to ‘arguably the greatest of all time. After a blessed but troubled life, hopefully he’ll finally find some comfort in the hands of God.’ The last was a reference to Maradona’s infamous ‘hand of God’ goal, punched into the net against Lineker’s England in the 1986 World Cup quarter-final in Mexico. Some of us still remember Lineker’s rather different response when Maradona was kicked out of the 1994 World Cup in the US, for taking a slimming pill: ‘Good riddance.’

Diego died aged 60 on the 15th anniversary of the death of George Best. For me, George will always be the best, the most naturally gifted player. But Maradona was the greatest thing football has ever seen. That is not intended as an insult to Pele, Messi or anybody else. It’s just true.

Pele was the striker supreme, winner of three World Cups with Brazil (the first aged 17), and reputed to have scored more than a thousand goals in his career. Pele won his World Cups in great teams – most memorably the Brazil side he led to glory in Mexico 1970. By contrast, Maradona won the 1986 World Cup almost single-handed. In 1986 Argentina were a decent team, but even the half-decent England could have won it that year with the unstoppable Diego on their side.

Indeed, given the weakness of his right foot, Maradona arguably won the World Cup on one leg. Watch him humiliate England for his second goal in that quarter-final, waltzing through half the team while only touching the ball with one boot – the left foot of God. Even limping past his peak, Maradona carried a weak Argentine team to another World Cup final in Italia 90.

When the world football authority, FIFA, held a poll to determine the greatest player of the 20th century, Maradona pipped Pele in the vote – ‘before’, as the BBC obituary diplomatically put it, ‘FIFA changed the voting rules so both players were honoured’. That vote-rigging exercise captured a key difference in the perception of the two players. Unfairly or not, Pele has often been viewed as something of a corporate man; he was certainly exploited as a poster boy by Brazil’s military dictatorship.

Maradona was always seen as a man of the people, the ‘people’s champion’ who also became the real one. He hailed from a Buenos Aires shanty town, where legend has it he was once rescued from an ordure-filled sewer by his uncle. He became the sporting hero and hope of Argentina’s masses and millions more around the world.

Maradona was always careful to put himself on the side of the underdog, even when he became a millionaire playboy with dubious connections in high places. When he left Barcelona for Italy in 1984, he went to the impoverished southern city of Naples rather than the rich football powerhouses of the north. Napoli had never won anything, and were taunted by the fans of northern Italian clubs as cholera-carrying scum. With Maradona, they were champions of what was then the best league in the world twice in four years, and won the UEFA cup for good measure. When Argentina played (and beat) the host nation in Naples in Italia 90, Maradona appealed to his adoring Neapolitan fans to support his team, asking ‘What has Italy ever done for you?’.

Arriving in America four years later, Maradona had a message for Argentina’s preening president, Carlos Menem: ‘Instead of swanning around here and boasting to everybody that we are going to win the World Cup, he should think of the poor people at home, on the streets and without jobs.’ He even told the pope to stop preaching about the poor and give them the Vatican’s vast wealth instead.

Many of us loved the way that Maradona took his fighting attitude on to the pitch. He endured racist abuse and violence of a sort that no footballer could imagine in today’s sanitised game. And he was prepared to reply in kind. Having been kicked to pieces for two years in Spain, Maradona’s Barcelona career was effectively ended by an extraordinary mass brawl at a cup final, where the five foot five inches Diego responded to fouls and xenophobic insults by head-butting, elbowing and kneeing Atletico Bilbao players in front of the king and 100,000 spectators. His first World Cup, in Spain 1982, was ended by a red card for a spectacular retaliatory foul on Batista of Brazil.

What about the drugs? When he was ousted from that US World Cup in 1994, after being found to have traces of a banned weight-loss drug in his bloodstream, there was much smug crowing among English football pundits. Some said he should never have been allowed to play in the first place, because of his previous conviction for taking cocaine. Two dissenting voices spoke up here in Diego’s defence. One was England legend Jimmy Greaves, in the Daily Mirror. The other was a youngish writer called Hume (editor of Living Marxism magazine, writing under the pseudonym Eddie Veale). Both of us pointed out that they had not invented a drug which could make you play football like Maradona – and that he had ruined his health playing on injections of the legal pain-killing drug, cortisone, to cope with the violence inflicted by thugs in football boots. Elsewhere, his ejection from the World Cup sparked protests around the world, including three days of rioting in Bangladesh.

Inevitably, amid the posthumous praise this week, there were signs of lingering English bitterness about Maradona having ‘never apologised’ for the ‘hand of God’ goal. But why would anybody expect him to say sorry for a trick he celebrated as ‘some sort of symbolic revenge against the English’, four years after the Falklands War? Reporters recently pointed out to Maradona that, if today’s controversial Video Assistant Referee (VAR) system had existed back then, his handball goal would never have stood. He replied that if today’s goal-line technology had been around in 1966, England would never have won the World Cup, because Geoff Hurst’s controversial goal did not cross the line. International sport, as George Orwell observed, can be war without the shooting.

For all that, some of us English fans never lost our deep affection for Diego, a player with a real feel for what football means to people, a fan who just happened to grow into a footballing genius. For some reason, some of us have always had a particular affinity with shorter, stouter players who run rings around the athletic giants of the game. The Napoli shirt I bought in Naples’ old town, where Diego is still revered, has ‘MARADONA’ on the back and ‘MARS’ emblazoned on the front – incongruously hailing the chocolate bar rather than the Roman god of war, yet maybe fitting for a war-like god of football with a sweet tooth for life’s off-field temptations.

As for those still whining on about how Maradona’s dodgy lifestyle made him a ‘flawed genius’ (what other kind is there?) – as the old Russian parable has it, ‘Eagles may at times fly lower than hens, but hens can never rise to the height of eagles’. And nobody has ever risen to the heights of Diego Armando Maradona.