And a plague shall cover the land of Trump

The anti-Trump lobby views Covid as divine retribution for the masses’ blasphemy against experts. 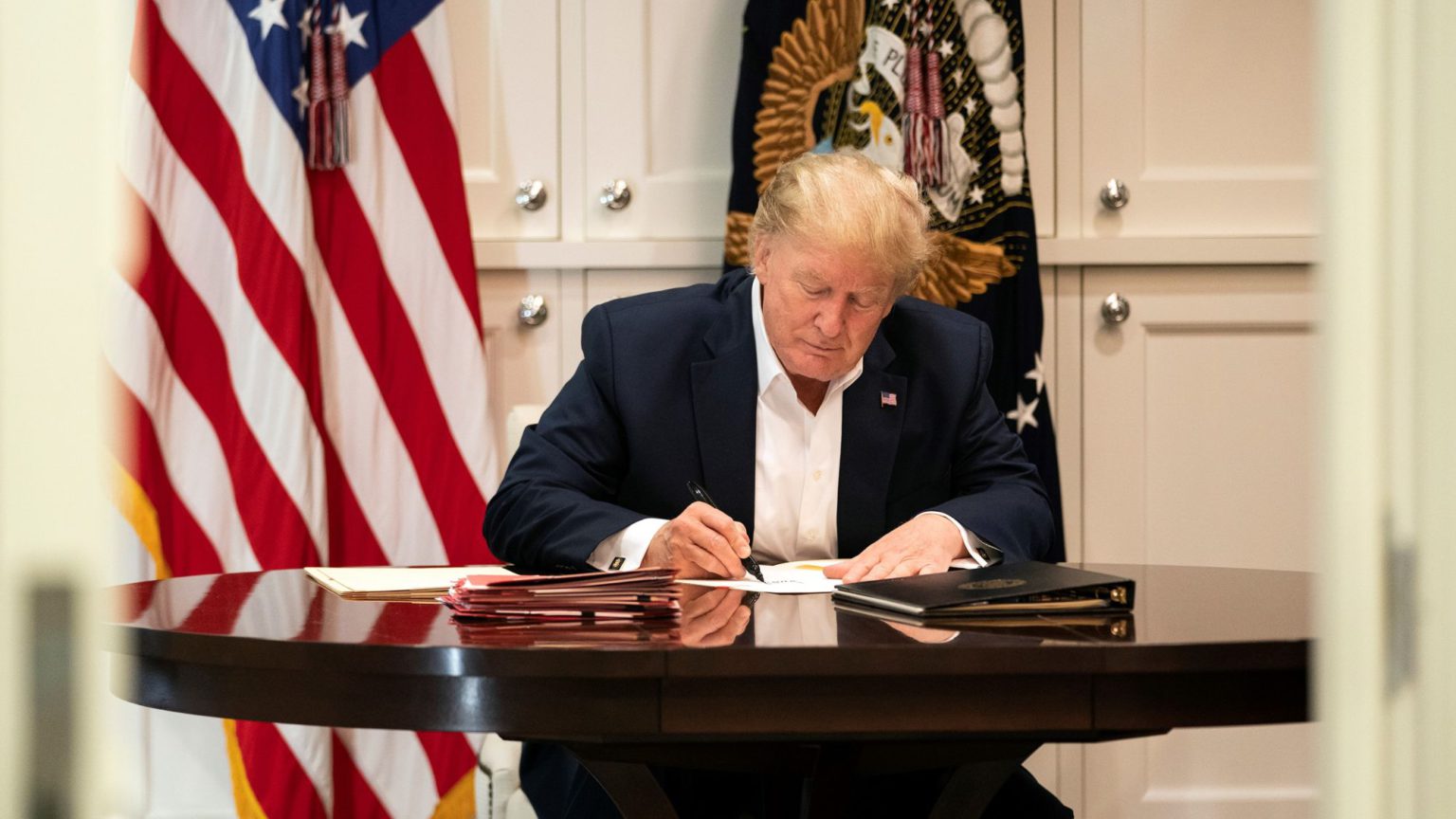 This is a moment that ‘feels Biblical’, says Maureen Dowd at the New York Times. She is talking, of course, about President Trump being struck down by the plague, by Covid. Going full Leviticus, Dowd marvels at the karmic retribution of this chief doubter of Covid now being infected by Covid, of this blasphemer against experts now suffering the fate that experts warned would befall him if he didn’t comply with their rituals of mask-wearing and lockdowns. ‘The implacable virus has come to his door’, Dowd writes, giving Covid-19 sentience, power almost: the power to smite its unbelievers. Implacable: that means something which cannot be appeased. That’s Covid, apparently: the insatiable beast, the terrible god, who will brook no questioning.

Dowd isn’t the only Trump-basher getting all Biblical over Covid’s visitation upon the White House. Across the commentariat and the Twittersphere there is much Schadenfreude that the man who scoffed at the idea that he should change his entire life in response to a virus must now meekly, weakly watch as the virus has ‘come to his door’. ‘It’s hard to overlook the symbolism of Trump’s positive test’, says one writer. The president who ‘recklessly and flagrantly disregarded science and factual information’ has had his viral comeuppance. We have some ‘justification’ for considering Trump’s contraction of coronavirus ‘to be a kind of karmic retribution’, says a writer for the Guardian. It is retribution, he suggests, for Trump’s ‘irresponsible pursuit of partisan advantage over the national interest’.

‘Karmic retribution’ is of course only a slightly more PC, hippyish way to say what people in medieval times thought about plagues: that they were divine punishment. Punishment of avaricious individuals or of entire sinful communities. A key metaphor in this pre-modern understanding of plagues-as-retribution was that these judgmental diseases were inescapable. No one – not Pharaohs, not the wealthy, not even a reality-TV star who becomes the most powerful man in the world – could hide from their pox-ridden reprimands. As Susan Sontag writes in her masterful AIDS and its Metaphors (1989), the pre-modern view of disease as retribution was an ‘essential vehicle for the most pessimistic reading’ of humanity’s capacity. ‘[T]he standard plague story was of inexorability, inescapability’, she wrote. This insistence on inescapability, on the plague as discoverer of all sinners, wherever they cower and lurk, infuses the cynically joyous commentary on Trump’s illness. ‘Fate leads the willing, Seneca said, while the unwilling get dragged’, writes Dowd. Fate. That pre-Renaissance idea. It’s back.

This is all ‘karmic irony’, says a writer for CNN. In this ‘plague year’, he says, ‘the president who downplayed the pandemic for so long and dismissed the wearing of masks has come down with the disease’. The inhabitants of the Twittersphere have been even more unrestrained in their pre-modern relish at Trump’s smiting by coronavirus, including a former staffer for Hillary Clinton, who said she hopes he dies. Well, he deserves to, right, for his blasphemous questioning of the seriousness of Covid and the efficacy of masking and locking down? In the words of Dowd, the most retributive of the new priestly class, ‘the president’s pernicious deceptions [have] boomeranged against him’. Nancy Pelosi says Trump’s bristling against expert advice on Covid was a ‘brazen invitation’ to the sickness to visit his own home. Question and ye shall be visited…

And so shall a plague cover the land of Trump. That is what these people are saying. They have imbued Covid with moral power and even political authority. For the sins that Trump is apparently being judged for, apparently being sickened for, are fundamentally political ones. It is not merely that he has refused to wear a mask or has questioned the wisdom of lockdowns. Enforced masking and the shutdown of economic life that we have seen across much of the Western world are strategies about which it is entirely legitimate (or ought to be) to have differing points of view, to have reasoned, rational debates about efficacy and impact. No, Trump’s chief sin is a larger one than that: it is that he has bristled against the rule of experts and the contemporary liberal orthodoxy that says science has all the answers to our political and moral problems. This is the true thoughtcrime for which Covid has apparently infected Trump.

‘Reality bursts the Trumpworld bubble’, as the New York Times’ headline put it. ‘The one-time reality-TV star has run smack into scientific reality’, says CNN. This might sound modern and sciency, but it is little different to when priests of old insisted that visitations of the pox were a case of people’s sinful behaviour crashing into God’s judgement. And it isn’t only Trump who has sinned, of course; so have his allegedly clueless, scientifically illiterate supporters. Much of the ‘karmic retribution’ commentary sees them as being reprimanded by the plague as much as Trump. It is Trumpworld that might finally be aroused to normalcy by Trump’s sickness, in the words of the NYT. Hopefully Trump’s smiting will be a ‘wake-up call’ to his supporters, says CNN with typical sniffyness. ‘Perhaps Trump’s illness will… be seen to have provided a much-needed national wake-up call’, says Geoffrey Kabaservice in the Guardian. Lord knows, the masses of ‘Trumpworld’ need a wake-up call, those maskless, expert-questioning brain sinners. They are to the technocratic, ‘evidence’-led rule of the new clerisy what the deviants of Gomorrah were to God’s writ.

CNN cut to the chase in one of its commentaries on Trump’s Covid diagnosis. The true sickness in America, it said, is the ‘sickness of hyper-partisanship’. And of course Trump is most responsible for this diseased form of politics which ‘too often elevates cruelty and justifies lies, through a vision of politics as a version of civil war’. Covid might be a serious virus, but what America really needs is ‘healing from hyper-partisanship… if we’re going to see something resembling real healing in the American body politic’.

This is what’s really going on here: Covid’s judgment, this plague-like retribution, is being marshalled by the old technocratic elites as a cudgel against what are presumed to be Trumpworld’s chief moral errors. The scepticism about lockdown, the broader doubting that experts have all the answers to our moral and political dilemmas, their temerity to clarify the huge political differences between ordinary people and the woke elites (what CNN refers to as ‘the sickness of hyper-partisanship’) – this is what the plague is apparently admonishing. Isn’t that funny? That a random virus should give retributive voice to the pre-existing views and prejudices of the liberal elites? The progressive view embodied by Sontag – that disease is ‘not a curse, not a punishment, not an embarrassment – without meaning’ – has been replaced by the view of Covid as lethal reproachment for the sins of Trumpism, the ills of politics, and the thoughtcrimes of dissenters in 21st-century America.

Strikingly, this isn’t the first time that Biblical metaphors have been deployed to chastise Trump and his supporters. Just a couple of weeks ago, the fires on the west coast of the US were heralded as heated punishment for Trumpworld’s thoughtcrimes against science. These flames were the direct consequence of Trump and his supporters’ temerity in questioning climate-change alarmism, we were told. In mid-September the New York Times – which then viewed fire rather than plague as the master reprimander of the inhabitants of Trumpworld – discussed the fires in the context of Trump once again ‘rejecting science’. Joe Biden went further, calling Trump a ‘climate arsonist’. Trump’s doubt about the manmade climate-change narrative will set America ‘ablaze’, said Biden. Suburban neighbourhoods will be ‘flooded out’, suburbs will be ‘blown away in superstorms’, and homes will be ‘burned in wildfires’.

And there you have it, in terrifying black and white, in explicit Biblical writ: if Trump stays in power, America will be visited by floods, fires and plagues; death will come to your door; pestilence will be visited upon the land. This pre-modernism among those who fancy themselves as modern – as enlightened and ‘woke’ – is striking. It speaks to their own profound inability to come up with a vision for the US that might inspire voters, so instead they must invoke a PC version of Leviticus and warn people that if you don’t choose us then you will be consumed by hellfire and disease. And it confirms what they find so distasteful about so-called Trumpworld – the fact that it has dared to question expert authority, pushed aside the liberal elites who believe that they are the only people sensible enough to rule, and propagated the apparently outrageous idea that ordinary people (eurgh) have something to contribute to the discussion about how we deal with Covid-19 and other crises.

This is what lurks behind the irrational, anti-Enlightened treatment of Covid as a metaphor for the sicknesses of 21st-century America – the desperation of the bruised old elites to regain their authority over a people whom they view as too dumb, vulgar and destructive to govern their own lives. Now that’s sick.