​​​​​Tony Abbott’s crime? Being a Catholic

Some now seem to think that people with Catholic beliefs should be excluded from public office. 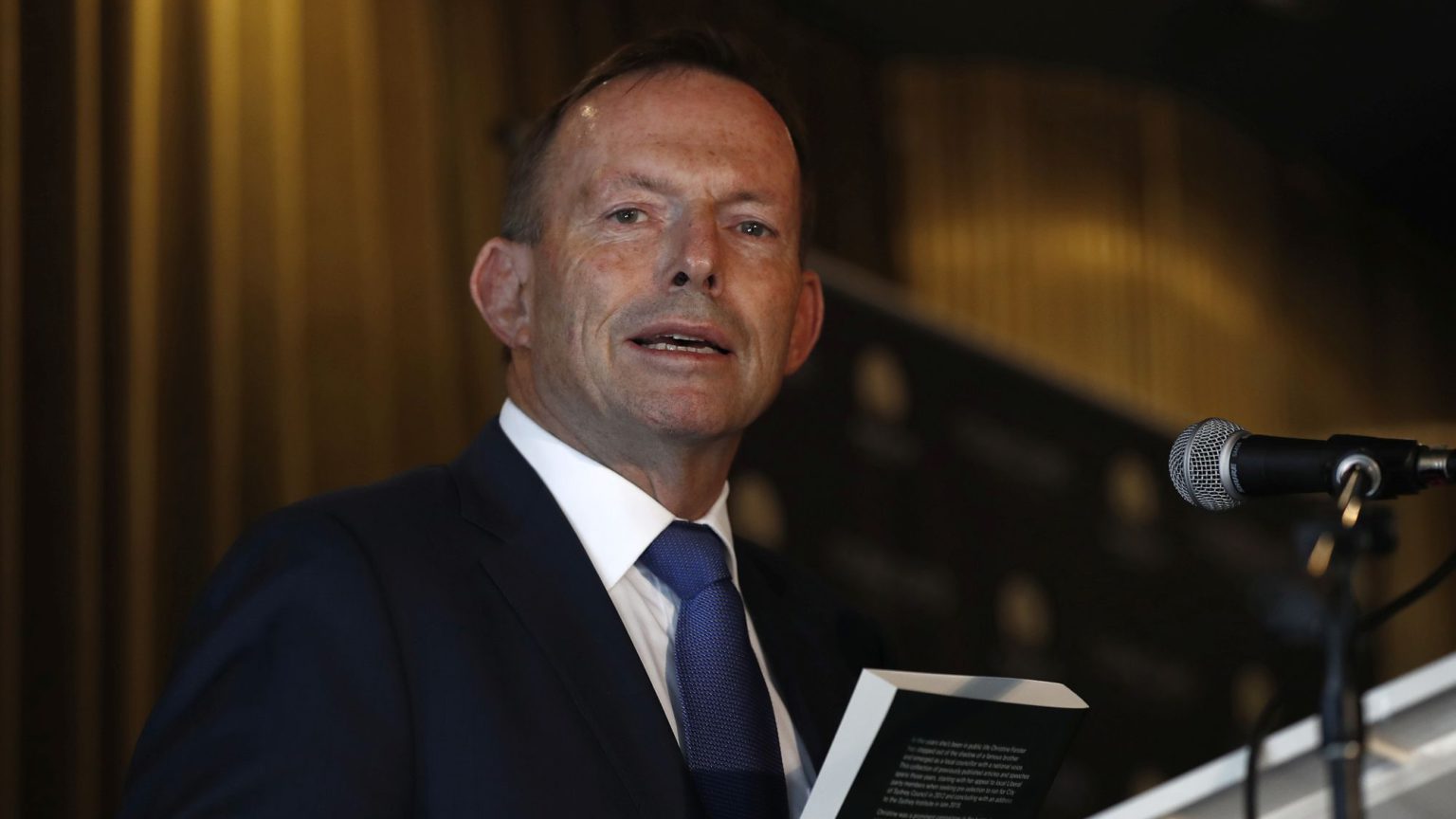 To those of a Whiggish disposition, the Glorious Revolution of 1688 and the laws passed in its aftermath represent a huge step forward for English liberty, as parliament established its sovereignty over the Crown, and freedom was enshrined in law.

One group, however, was noticeably absent from this bounty: Roman Catholics. For all the talk of liberty and focus on tolerance, it did not occur to those in power to repeal the Test Act of 1673 (or, as its full title has it, ‘An Act for preventing dangers which may happen from popish recusants’). This forced those who would hold public office to sign a document renouncing the Catholic doctrine of transubstantiation and to take the sacraments in the Church of England within three months of taking office. The Act would remain in force until 1828, although it was seldom enforced after 1800, except in academia, where Catholics were unable to graduate from Cambridge or even to matriculate at Oxford.

While it might seem bigoted to us, at the time, the Test Act was not merely a matter of prejudice. The English Reformation had ended in a Civil War, and the winning Protestants were keen to defend their victory. In a world where the political and the religious were closely intertwined (the king of Spain had been His Catholic Majesty since the time of Ferdinand and Isabella), invasion by a Catholic power was not an unreasonable fear. Why would one want to allow those most likely to be in favour of such an event anywhere near power? Equally, Catholics ultimately owed their allegiance to the pope, whose interests might not always align with those of the English state. In the last resort, could Catholics really be trusted to do the right thing?

Times have moved on, and the only remaining bar on Catholics holding office applies to the monarch, who, as supreme governor of the Church of England, really cannot be Catholic if he or she is to discharge his or her duties. This is less an instance of anti-Catholicism, and more a reflection of the established nature of the Church. The monarch, by definition, has to be a Christian, and has to be an Anglican Christian.

One person who might suspect that a degree of anti-Catholic sentiment lingers, however, is Tony Abbott, the former Australian prime minister, whose appointment to Britain’s Board of Trade has drawn opprobrium due to his being a ‘homophobic misogynist’, in one characterisation.

The root of the accusation of homophobia is his opposition to same-sex marriage, which is an entirely orthodox Catholic position. His misogyny derives from a description of a female candidate for parliament as having ‘a bit of sex appeal’ and comments about the ‘housewives of Australia’ doing the ironing.

It is important to note that the charges against him relate to his beliefs, rather than his actions. While he campaigned against same-sex marriage, it was his government which offered a plebiscite on it, and, subsequent to its legalisation, he attended the wedding of his sister to her female partner. Equally, his female former chief-of-staff defended him against charges of sexism by pointing out that all his chiefs-of-staff during his time in public office had been female. However, like the Test Act, the argument against Abbott (and others who hold his views) is that the mere act of having such beliefs makes one unfit for office. Is that true, and what does it imply more broadly?

In a trivially legal sense, it is not true. The ‘fit and proper’ test as applied in law has no interest in one’s beliefs. The concept originated from a desire to weed out those who would not be able to discharge a job to an acceptable standard. As such, the applicant needs to demonstrate firstly competence, and secondly the personal characteristics that would give one confidence in their abilities. They have to be good at the job, and they have to be a good person.

Given that Abbott’s proposed position is in the sphere of international trade, it is hard to see how the accusations levelled against him should have much weight with regards to his competence, for the simple reason that they do not relate to trade policy. The only way one could argue that they are relevant is to further argue that holding such beliefs, in and of itself, suggests that one lacks the ability adequately to discharge the office. Because the views themselves are so patently wrong that no reasonable person could hold them.

Is an opposition to same-sex marriage such a belief? Given the relative recency of its adoption by society, it is hard to think so. Barack Obama himself was opposed to it in the 2008 presidential election, before his position ‘evolved’. Opposition to same-sex marriage is not an empirical question that can be resolved by appeal to external facts. It is a position which derives from other assumptions about humanity and morality.

The assumptions Abbott makes, which may be different to those made by others, lead him to oppose it, and there is nothing incoherent about that position. Ironically, if he started from those assumptions and reached the conclusion his opponents favour, there would be less controversy over his appointment, but possibly greater grounds for it given the incoherence of his position. Equally, references to ‘housewives ironing’ reflect a country where, according to polling, 85 per cent of domestic chores are performed by women. One may wish it were not so, but his comment was a reasonable reflection of reality.

So, if there is nothing about Abbott’s reasoning from his assumptions that should disqualify him, is there something about the assumptions themselves that should have ruled him out of consideration? These assumptions are shared by many of the world’s 1.2 billion Catholics, and would probably be viewed sympathetically by many of the 1.9 billion Muslims. In a global context, belief in a creator God who laid down rules for humanity is not unusual. While it might seem odd in the enlightened West, it is important to remember that science has not disproved religion – rather, it has provided an alternative, perhaps more parsimonious, explanation for many of the phenomena we observe. It has rendered God redundant, not dead.

Someone who follows a mainstream religion is not the same as someone who claims to be a Jedi because they seriously think the Star Wars films are an accurate description of the world. We can certainly say that their beliefs are unlikely, but we cannot say they are wrong.

If holding beliefs such as Abbott’s does not suggest an inability to perform the role competently, is there something which suggests some moral failing? Can we conclude from them that he lacks the moral integrity required in a holder of public office?

Usually, to fail a ‘fit and proper’ test, moral failings need to be serious – meriting a prison sentence – or to be failings of honesty, suggesting that one cannot be trusted. No one is making such an accusation in this case, so for the charge to stick, there needs to be something else in his beliefs to suggest a degree of moral infirmity.

One argument might be that his beliefs would make others uncomfortable, thereby causing some degree of harm. If he is harming others, then surely he must be a bad person. However, the harms in this case are of a particular nature. If someone is stabbed, no matter who it is, they will bleed. If someone is offended by something, there is no guarantee that someone else would be. As the Roman philosopher Epictetus said, ‘Have ready the reflection that they are not upset by what happened – because other people are not upset when the same thing happens to them – but by their own view of the matter’.

One might argue that the mere act of providing a trigger is enough evidence of moral infirmity to make one unfit, but this seems to be an impossible standard. For a start, one would need to apply it equally. As we noted above, there is nothing conclusively ‘wrong’ about opposition to same-sex marriage or talking about housewives ironing, however upsetting some may find these comments, so other opinions would be equally appropriate grounds for dismissal. A former soldier might, for example, be offended by a pacifist’s disrespect for the dangers he has faced and argue that he cannot hold public office.

One cannot try to separate out some beliefs as uniquely harmful and therefore deserving of sanction because there is no conclusive test to decide it. These are, ultimately, matters of opinion, not fact. If the mere act of saying something that caused some people to feel offended became the standard for deciding on someone’s fitness, life would rapidly descend into Hobbes’ bellum omnium contra omnes.

It is not obvious, therefore, why one’s views on matters such as same-sex marriage should have any bearing on one’s fitness for office. It has no bearing on one’s likely competence, and to see it as evidence of immorality, one would need to apply the standard of ‘harm’ so widely that society would rapidly cease to function. So why even try?

Here, the comparison with the Test Act is perhaps informative. A new ideology has, in many areas, triumphed over its predecessor. It is keen to cement its victory over its opponents, and removing them from power is an obvious way to do that. However, like the Test Act, while it might be understandable, it is not right.

Stewart Slater works in finance. He has previously been published in Areo and Modern Stoicism.