The trouble with gay marriage

Yes, Ireland has entered a new era of equality – but not the positive kind. 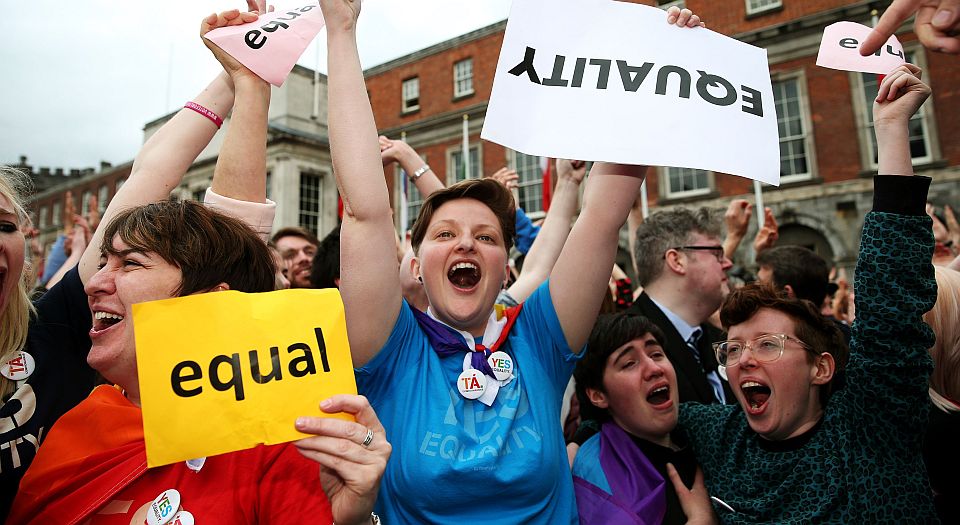 The most striking thing following the Irish referendum on gay marriage is how few people are talking about gay marriage. Amid the near-global cheering that greeted the vote in favour of instituting gay marriage, there was barely any commentary on the institution of gay marriage. Sure, there was a handful of on-air marriage proposals in Dublin as the news cameras rolled, and the tailend of a BBC TV report informed us when the first gay marriages in Ireland would take place (Autumn). But given that this referendum was all about opening up a social institution to which gays had apparently been brutally denied entry, the lack of post-referendum talk about actual marriage was remarkable.

Instead of saying ‘We can finally get married’, the most common response to the referendum result from both the leaders of the Yes campaign and their considerable army of supporters in the media and political classes has been: ‘Gays have finally been validated.’ Across the spectrum, from the drag queens who led the Yes lobby to the right-wing politicians who backed them, all the talk was of ‘recognition’, not marriage. Ireland’s deputy PM Joan Burton said the Yes vote was about ‘acceptance in your own country’. Writing in the Irish Examiner, a psychotherapist said ‘the referendum was about more than marriage equality… it was about validation and full acceptance [of gay people]’. (Tellingly, Ireland’s psychotherapy industry played a key role in backing the Yes campaign.) PM Enda Kenny also said the referendum was about more than marriage — it was a question of gay people’s ‘fragile and deeply personal hopes [being] realised’. Or in the words of novelist Joseph O’Connor, the Yes vote was an act of ‘societal empathy’ with a section of the population.

The official Yes campaign went so far as to describe the Yes victory as a boost for the health and wellbeing of all Irish citizens, especially gay ones. A spokesperson said ‘the effect of legal equality goes beyond the letter of the law… it enters our daily lives and our interaction with others’. In ’embracing’ gay people, Ireland had ‘improv[ed] the health and wellbeing of all our citizens’. In short, the Yes result made people feel good. A writer for the Irish Times described his gay friends’ pre-referendum ‘nagging shadow’, a ‘feeling that [they are] less somehow’, and he claimed the Yes victory finally confirmed for them that they now enjoy society’s ‘support, kindness and respect’. Fintan O’Toole said the Yes victory was about making gays feel ‘fully acknowledged’.

And you thought it was about marriage? How wrong you were. All the commentary on how the referendum was ‘about more than marriage’, how it went ‘beyond the letter of the law’ to touch on something deeper, something psychic, confirms that the campaign for gay marriage is not about achieving social equality — no, it’s about securing parity of esteem, which is very different. The march of gay marriage has a stronger relationship with the new culture of therapy, and the need for recognition, than it does with the more longstanding ideal of legal equality and the need for rights. What is being sought here is not really the right to marry but rather social and cultural validation of one’s lifestyle — ‘societal empathy’ — particularly from the state. What we have witnessed in Ireland is not a new dawn of social equality but the further entrenchment of the value of cultural equality, and this is far from positive.

Ireland’s focus on recognition rather than rights, and the celebration of gay marriage as a means of validating gay people’s sense of worth, echoes the discussion about gay marriage in nations across the West. Time and again, the language used has been that of therapy rather than autonomy. In her excellent 2004 essay ‘The liberal case against gay marriage’, Susan M Shell noted the way that early agitators for gay marriage seemed to be primarily concerned with ‘relieving adult anxiety’, what some of them referred to as their ‘elemental fear’ of not being ‘valued’ (1). Activists spoke of how ‘the lack of legal recognition [for our relationships] rankled more and more’. In the words of the authors of The Politics of Same-Sex Marriage (2007), activists primarily want ‘the sanction of the state for our intimate relationships’. This search for state sanction, for external recognition, has been echoed in the response to the Irish referendum. ‘My country has acknowledged that we exist’, said a gay Irish businessman.

What we have here is not the politics of autonomy, but the politics of identity. Where the politics of autonomy was about ejecting the state from gay people’s lives — whether it was Stonewall rioters kicking the cops out of their bars or Peter Tatchell demanding the dismantling of all laws forbidding homosexual acts — the politics of identity calls upon the state to intervene in gay people’s lives, and offer them its recognition, its approval. For much of the past 50 years, radical gay-rights activism was in essence about saying ‘We do not need the approval of the state to live how we choose’; now, in the explicit words of The Politics of Same-Sex Marriage, it’s about seeking ‘the sanction of the state for our intimate relationships’. The rise of gay marriage over the past 10 years speaks, profoundly, to the diminution of the culture of autonomy, and its replacement by a far more nervous, insecure cultural outlook that continually requires lifestyle validation from external bodies. And the state is only too happy to play this authoritative role of approver of lifestyles, as evidenced in Enda Kenny’s patronising (yet widely celebrated) comment about Irish gays finally having their ‘fragile and deeply personal hopes realised’.

What is being sought through gay marriage is not the securing of rights but the boosting of esteem. And this is a problem for those of us who believe in liberty. For where old, positive forms of social equality were a narrowly legal accomplishment, concerned simply with either removing discriminatory laws or passing legislation forbidding discrimination at work or in the public sphere, cultural equality is far more about… well, culture; the general outlook; even people’s attitudes. It is not satisfied with simply legislating against discrimination and then allowing people to get on with their lives; rather, it is concerned with reshaping the cultural climate, discussion, how people express themselves in relation to certain groups. In the apt words of the Yes campaign, this goes ‘beyond the letter of the law’. It is undoubtedly the business of society to ensure social equality for gays, so that they may work and live as they choose free from persecution or harassment. But is it the job of society to ensure that there is parity of esteem for gays? That they feel good? That they feel validated, respected? I would say no, for then we invite the state not simply to remove the barriers to gay people’s engagement in public life but to interfere at a much more psychic level in both gay people’s lives, in order to offer ‘sanction for their intimate relationships’, and in other, usually religious people’s lives, in order to monitor their refusal to validate gay people’s lifestyles and offer them ‘support, kindness and respect’.

This is why we have seen, across the West, the bizarre ‘gay cake’ phenomenon, where there are more and more cases of traditionalist bakers (and other businesses) being purposefully approached by campaigners to provide services to gay weddings. The aim of this very modern form of religious persecution is to discover and expose those whose attitudes have not yet been corrected by the top-down enforcement of parity of esteem, of protected feelings, for gays. That cultural equality is concerned not merely with altering laws, but with reshaping culture and even belief itself, is clear from the growing trend for harassing those who do not bow before the altar of gay marriage. Joan Burton made clear that this trend will now intensify in Ireland, when she said there will be no ‘conscience clause’ in the New Ireland: it would be intolerable, she said, to ‘exclude some people or some institutions from the operation of marriage equality’. That is, all must agree, all must partake; there can be no room for the exercise of individual conscience when it comes to the engineering of a new cultural climate.

What Ireland crystallises is that gay marriage has nothing to do with liberty. The presentation of this as a liberal, or even libertarian, issue is highly disingenuous. For in truth, gay marriage massively expands the authority of the state in our everyday lives, in our most intimate relationships and even over our consciences. It simultaneously makes the state the sanctioner of acceptable intimate relationships, the ultimate provider of validation to our lifestyle choices, while empowering it to police the cultural attitudes and consciences of those of a more religious or old-fashioned persuasion. This is bad for gays, because it reduces them, in Kenny’s words, to ‘fragile’ creatures who require constant recognition from others; and it is bad for those uncomfortable with gay marriage, since their ability to in act in accordance with their conscience is limited. Making the state the validator of our intimacies and the policer of our moral outlooks is a very dangerous game.

This goes some way to explaining why every single wing of the Irish state supported gay marriage, from the police, who proudly waved the rainbow flag, to all the political parties, the public sector, the health establishment and the cultural establishment. It’s because they recognise, at a gut level, that unlike pretty much every other demand for liberty or equality in modern times, the campaign for gay marriage does nothing to threaten their authority — on the contrary, it extends it, in a way that the most authoritarian among them could only have dreamt of. Strikingly, Fintan O’Toole celebrated the referendum result by saying that ‘Ireland has left tolerance far behind’, by which he meant that the New Ireland actively encourages ‘respect’, not ‘mere toleration’, of minority groups. He’s right, but not in the way he thinks: the new era of state-monitored cultural equality, of expanded state authority over more and more areas of our intimate lives and moral beliefs, does indeed mean that Ireland is leaving tolerance behind, and looks set to become a less tolerant country.