Why did the protests over George Floyd turn into mass hysteria?

A new culture of groupthink is emerging, and it is causing mass psychosis. 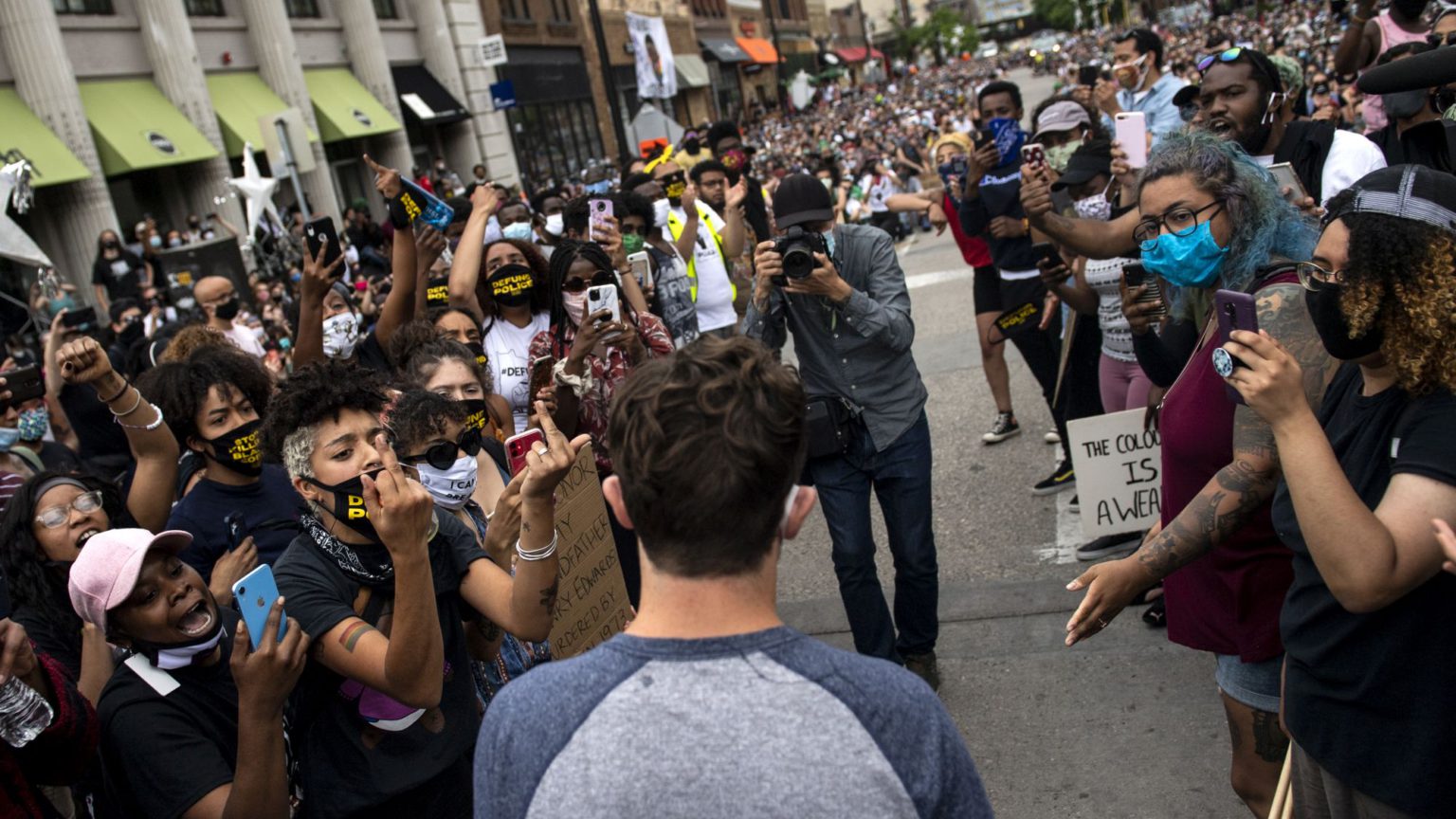 One of the most distinctive things about the eruption of Black Lives Matter protests across the world is the speed with which they were endorsed by virtually every powerful institution and individual. From Hollywood to the churches, from big business to public-health officials, the word is out: support for BLM is essential, and in some cases mandatory.

Online influencers are vying with each other to show how much they support BLM. Elite institutions are now telling their people that they have a duty to come to terms with their racism. Prestigious institutions from Eton College to the British Museum have issued statements in support of the movement. Elsewhere, employees have come under pressure to adopt the symbols of solidarity associated with BLM.

There is something perplexing about the way that elite institutions and powerful people are falling over themselves to be on the side of the angels. It is almost as if they have concluded that unless they act with haste in relation to supporting BLM, they will be in trouble. In some cases, institutions and companies have gone so far as to attack other businesses and individuals who appear to have strayed from the party line. Reebok ended its partnership with CrossFit because it was outraged by the CEO’s insensitive tweet on George Floyd. CrossFit’s CEO, Greg Glassman, tweeted ‘It’s FLOYD-19’ after the Institute for Health Metrics and Evaluation classified racism and discrimination as public-health issues. Predictably, numerous well-known people got on the bandwagon to denounce Glassman’s tweet as racist.

Typically these days, whenever an individual is called out and denounced for his language, an apology will swiftly follow. And so it was with Glassman. ‘I made a mistake by the words I chose yesterday’, he said, before adding: ‘My heart is deeply saddened by the pain it has caused. It was a mistake, not racist but a mistake.’

In the current climate, there can be no ‘mistakes’. Your words will come back to bite you. Just about any gesture or statement can be branded as not only insensitive, but racist. Poor Karol G, the reggaeton singer, who in response to the protests following George Floyd’s death tweeted a now-deleted picture of her black-and-white coated dog with the caption: ‘The perfect example that Black and White TOGETHER look beautiful.’ She also included the #BlackLivesMatter hashtag. When she was inevitably denounced and ridiculed, she issued a pleading apology: ‘I want to make clear that my intentions were right in the photo I posted earlier. I meant to say that racism is terrible and that I cannot begin to understand it.’

Other influencers have been forced to issue apologies for saying things that violated what is permissible according to the new BLM etiquette. After an outburst of criticism when she tagged a post #AllLivesMatter, the influencer Natasha Fischer wrote: ‘I can’t take back my ignorant hashtag but I can learn from it and do better.’ She pleaded: ‘I hope that this is heard and it’s understood that I made a mistake.’

As black actor Terry Crews has also discovered, only one point of view is allowed right now. He got called out for tweeting that ‘defeating white supremacy without white people creates black supremacy’. He was widely denounced. It is very difficult for a celebrity to hold or express genuine personal opinions these days. As one report notes, ‘People are urging celebrities to support Black Lives Matter online or stop posting entirely’.

If powerful celebrities, influencers and businessmen feel that they have no choice but to apologise and ask for absolution in relation to the BLM etiquette, imagine what it is like for everyday people who face pressure from employers or institutions to embrace what is fast becoming a new kind of groupthink. And when even grown-ups behave like naughty children and ask for forgiveness for getting their words wrong, imagine the impact this censorious culture will have on actual children.

Last night I talked to a mother who described how her 11-year-old daughter is at a loss to know how to respond to the pressure she faces from her peers and others on Instagram to include a BLM hashtag on her posts. ‘Can I just post a cake that I baked on Instagram?’, she asked. When young children are faced with the demand to conform or else, it is clear that a powerful mood of illiberal intolerance is sweeping our societies. Threatened with being ostracised, children as young as 11 and 12 now feel compelled to fall in line. Suddenly, the term ‘peer pressure’ has acquired a whole new dimension.

The language of intolerance is most strikingly expressed in the phrase ‘silence is violence’, or ‘white silence is violence’. At first, this statement seems unobjectionable. It even contains an important truth, which is that human beings have an obligation to speak out against acts of injustice and racism.

But the people who are most ferociously saying ‘silence is violence’ are not actually encouraging people to voice their views. What they’re really saying is that you are allowed to express one view – the view that accords with our doctrine. That is why even many people who have stated that they are against racism have been shut down. It is not enough to hate racism – if you are a white person, you must also acknowledge that you are complicit in all crimes committed against black people. Until white individuals acknowledge their privilege and signal their willingness to re-educate themselves, they remain on the wrong side of history.

So the demand ‘silence is violence’ does not represent a call for discussion and debate; rather, it is a demand for linguistic conformity to a non-negotiable truth. It is actually about silencing those who disagree with the BLM narrative.

The build-up of this intense pressure to conform is not really about the brutal killing of George Floyd. The emergence of this powerful global groupthink is also an outcome of the Covid-19 pandemic. From a sociological point of view, the lockdown and the pandemic can be seen as a medium through which many pre-existing cultural trends acquired an unprecedented momentum. The cultural polarisation that existed before the emergence of Covid has become even more rigid than it was.

Segregated identity bubbles, where people tend to speak and interact only with people who are just like them, are the underpinnings of the current hot-house atmosphere of cultural intolerance. And in recent weeks, with everyone locked down, life in polarised bubbles has become even more intense, leading to what we have now: the explosion of a new language of grievance into the public domain. And this new language is further intensified by new public rituals, such as taking the knee and the mass repetition of slogans about suffering and victimisation.

The protests and riots that followed the tragic killing of George Floyd have served as a catalyst for unleashing pent-up energies. Much of this is about achieving justice, but there is a wide range of negative emotions and resentments, too. In different circumstances, some of the anger could have been harnessed towards positive ends. In today’s culture of moral confusion, however, the protests have instead become self-consciously visual and performative. When a famous black actor gets up to give a speech at a protest in London and says, ‘Look, I don’t know if I’m going to have a career after this, but fuck that’, he is performing to a well-rehearsed script; it is like someone auditioning for a leading role in an unfolding drama.

The climate of groupthink has now become a kind of mass psychosis among white people desperate to communicate that they ‘get it’. We have seen videos of groups of white people getting on their knees and begging for forgiveness for their sins. These disturbing images resemble a medieval ritual of self-abasement. All that is missing is actual self-flagellation. At times, the impulse of self-loathing has given rise to a frenzy of moralistic outrage. The sight of Jacob Frey, the mayor of Minneapolis, subjecting himself to the humiliation of an angry crowd shouting ‘shame, shame, shame’ confirms that we now have an epidemic of hysteria. The walk of shame being done by Frey and others, reminiscent of a scene from Game of Thrones, is not simply a response to racial injustice. More importantly, it is a testimony to the moral disorientation of American society.

The pulling down of the statue of slave trader Edward Colston in Bristol confirms that anti-racist protest has become meshed with an outburst of mass psychosis. What was really disturbing was not the actual tearing down of the statue but what happened afterwards. The statue was dragged through some streets before being thrown in the river. It was almost as if what was being dragged was a person rather than a statue. As I watched, a thought fleetingly rushed through my head: ‘What are they going to do next – open up Colston’s grave and rid the world of any trace of his existence?’

Mass hysteria, which is often an extreme example of groupthink, tends to disappear as fast as it emerges. But today, matters might be different. Today’s prevailing climate of intolerance is deep-rooted. The zeitgeist of intolerance that has already been institutionalised in higher education is now spreading through the rest of society. It will overwhelm our lives unless we have the courage to challenge its attempts to dictate what we may say and what we may think.