The public must lead us out of the lockdown

The political elites have lost the plot over Covid-19. The people must take over. 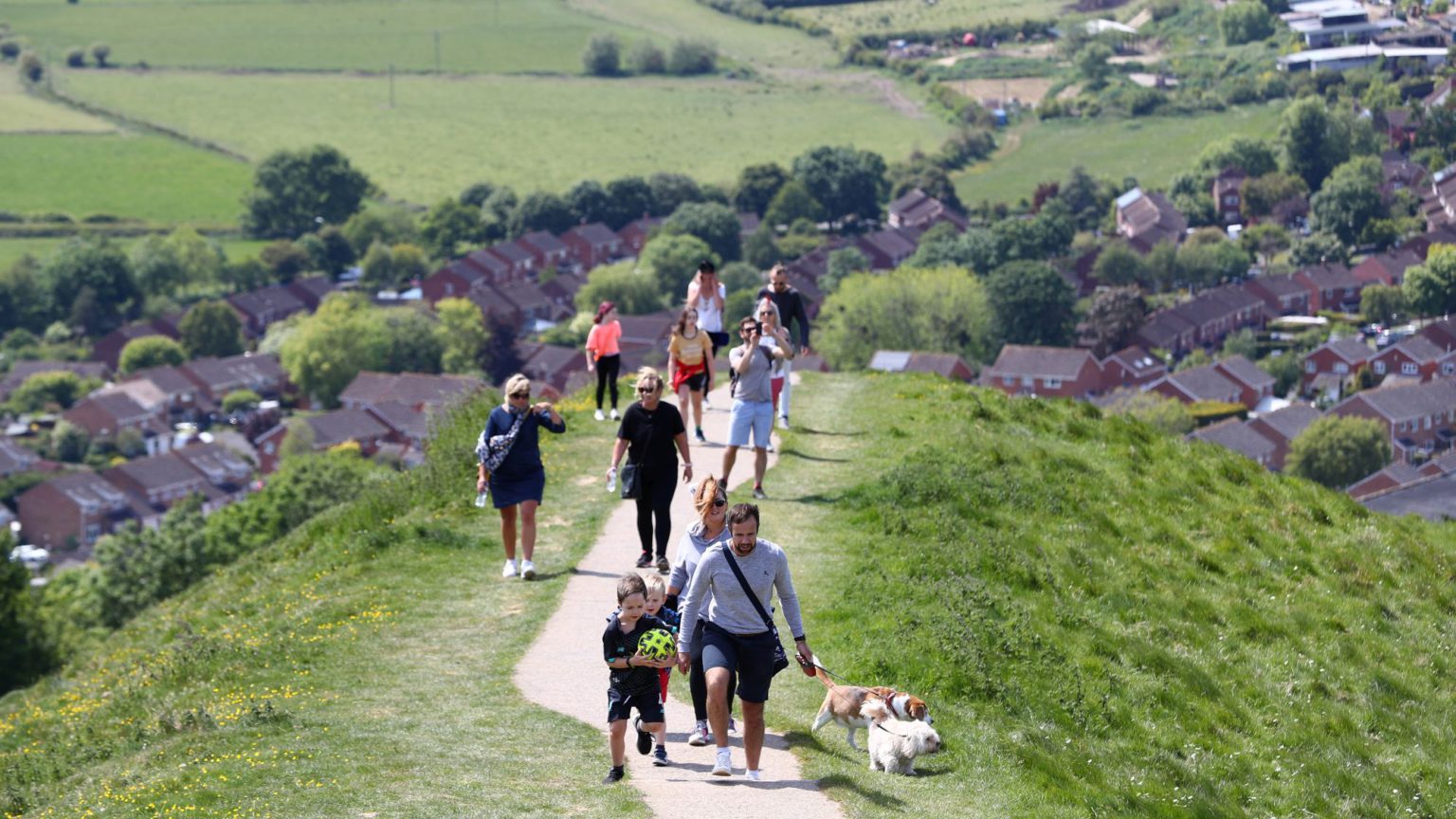 There was a fascinating clip on the news last week. ITV was reporting from a crowded beach in Brighton. People were sunning themselves, chatting with friends, necking beers. All to the fury of lockdown fanatics, of course, who view these pleasure-seekers as selfish, unwitting murderers. ‘You’re killing people!’, as the demented cry goes.

During ITV’s report, a man holding a bottle of beer and mingling with his family said something really revealing: ‘I know we’re down here drinking beer… but if we carry on the way we’re going, I think we’re going to have a major lockdown in two weeks… and we’re going to see a massive rise in deaths again.’

So he was breaking the lockdown, or at least infuriating lockdown fanatics, while simultaneously genuflecting to one of the core commandments of the lockdown ideology – that individual bad behaviour can cause social mayhem and even death.

It was a telling snapshot of where I think many people are at right now. Instinctively, growing numbers of people are bristling at the lockdown, recognising that it is deeply harmful to work life, social life, and liberty itself. But they know you aren’t meant to hold this view, far less act on it. So they make a performance of fealty to the lockdown strictures.

So overbearing is the lockdown ideology, so widespread is lockdown conformism among the opinion-forming set, that people recognise that opposing it is a socially risky business. You’ll be demonised, Twitter-shamed, branded a killer. You will be reduced to a ‘Covidiot’. To be a lockdown apostate, to question the rituals of social distancing, is not a pleasant experience.

Indeed, our beer-drinking friend, despite publicly swearing allegiance to the cult of lockdown, was still judged to have lapsed too far from the lockdown belief system. He was mauled online. He should be denied medical treatment if he requires it during the second spike he’s helping to bring about, the lockdowners cried. Let him die.

His expression of devotion to the gospel of lockdown was not enough to save him from the Twittermob. His sin was too grave, his joy over that cold beer too iniquitous. No amount of bowing to the lockdown narrative could wash away such moral error. Like the heretics of old who made a desperate last-minute conversion to godliness but still got burnt by the yapping mob anyway, our Brighton friend failed to convince the self-elected policers of lockdown fidelity that he is one of them.

Saying one thing and doing another – expressing support for the lockdown while breaking it on the sly – is probably widespread in lockdown Britain. In a sense it’s a healthy hypocrisy, speaking to some people’s scepticism of the lockdown and their willingness to take risks to do things that are essential to the human soul: have a beer on Brighton beach, visit family members, pop into the office, swing by a sexual partner’s house.

These are good things, as nutritious to the individual as food and exercise are. Despite what the lockdown fanatics might think, man cannot live by Morrison’s microwave meals and dog-walking alone. We need connection, engagement, touch, art, religion. It is testament to the nanny state’s successful reduction of human beings to units of health that so many in officialdom think it is acceptable to deprive us of social, spiritual and sexual interaction for so long.

But there is also a serious problem with this ‘healthy hypocrisy’. It confirms the dominance of one way of thinking. It speaks to a tyranny of wisdom – in this case the wisdom of lockdown – that people feel they must bow before even if they disagree with it. That people feel they cannot join together their personal breaking of the lockdown with a willingness to publicly challenge the whole idea of the lockdown demonstrates the power of conformism and the supremacy of the technocratic elite’s worldview.

Polls capture – in that partial way that polls do – this tension in lockdown Britain. On one hand, polls show widespread support for the lockdown. At the start of May, a month into this unprecedented shutdown of economic life and social life, an Opinium poll found that four out of five people were in favour of extending the lockdown and were opposed to easing the closure of schools, pubs and restaurants.

But polls also find that people are breaking lockdown. A few days after that Opinium poll, another survey found that 29 per cent of Brits had broken the rules. What was most striking is that this confession to sinfulness by 29 per cent of people was only possible because the poll was anonymous. When polling is not anonymous, when there’s a possibility your name will appear alongside the heresy of breaking lockdown, just three per cent admitted to doing things they aren’t meant to be doing.

The disconnect between public backing for the lockdown and (anonymous) public breaking of the lockdown is fascinating. It suggests there is a significant minority of what we might call shy libertines out there – people who have been exercising their freedom in defiance of the strict rules but who are shy about saying so. They live part of their life outside the lockdown, but they tell pollsters the lockdown is great and must continue.

In a sense this isn’t a new phenomenon. People have been saying things they don’t really believe to pollsters for a long time. And such dishonesty with pollsters tends to grow in times of huge social pressure, when a culture of conformism makes it clear that ‘deviant’ thinking will not be tolerated.

In the US they call it ‘the Bradley effect’, after Tom Bradley: the black mayor of Los Angeles who in 1982 failed to win the race to become governor of California despite being ahead in polls for a long time. Sociologists believe that the intense growth of political correctness in the 1980s encouraged people to tell pollsters they were planning to vote for the black candidate, even though they weren’t, so that they would be considered good people.

In the UK we have the ‘shy Tory’ phenomenon, where in the 1992 General Election, and even more pointedly in the 2015 General Election, opinion polls continually underestimated the Tory vote. In a cultural climate in which it was considered bad to be a Tory, where much of education, commentary and popular culture was oriented towards Tory-bashing and depicting Tories as greedy, uncaring people, many voters opted to tell pollsters a little white lie rather than risk being considered unkind and un-PC. Historically, this trend has been referred to as a ‘spiral of silence’, where, fearing isolation or demonisation for their views, people cease to express them openly, including to pollsters.

A similar thing seems to be happening in Covid Britain, if anything even more intensely. The political conformism on the lockdown is staggering. There are virtually no political voices challenging it. The media, from the broadsheets to the tabloids, have been feverishly pro-lockdown. They have photographed and shamed lockdown breakers. The Twitterati, those footsoldiers of correct-think, have branded people who want to ease the lockdown as selfish, dangerous killers. In such circumstances it is not at all surprising that even people who are rebelling against the lockdown are telling the measurers of public opinion that they support it.

Political shyness is never a good thing. When people are reluctant publicly to express certain views, that means our societies are not as free and open as we should expect them to be. It shows that plurality of opinion no longer exists in a meaningful way. In normal times, that is bad. In the time of Covid it is positively lethal, because it means the increasingly destructive lockdown is not being publicly challenged, even by people who are sinning against it in their everyday lives.

Covid conformism must be confronted. In their echo chambers, where they’re all trying to outdo each other in their levels of commitment to smashing Covid, the political and media elites have become increasingly blinkered, dogmatic and intolerant on everything related to Covid-19. The lack of relaxed, freely stated opposition to their lockdown mania means they become madder and madder in their commitment to it. The corrosion of freedom of thought in relation to Covid-19 has deadly consequences, because it means the lockdown endures – nine weeks now – when many people know in their heart of hearts that it is wrong and deeply damaging to the future of this country.

So the public has to step up. Our political leaders and cultural elites cannot be trusted to lead us out of lockdown. They have invested too much of their reputations in this unhinged policy. A huge step-change is required in the UK and the public must bring it about, by chipping away at lockdown and, even more importantly, arguing against it in the public arena.