Elites say he is a dangerous commie and / or insufficiently woke. He must be doing something right. 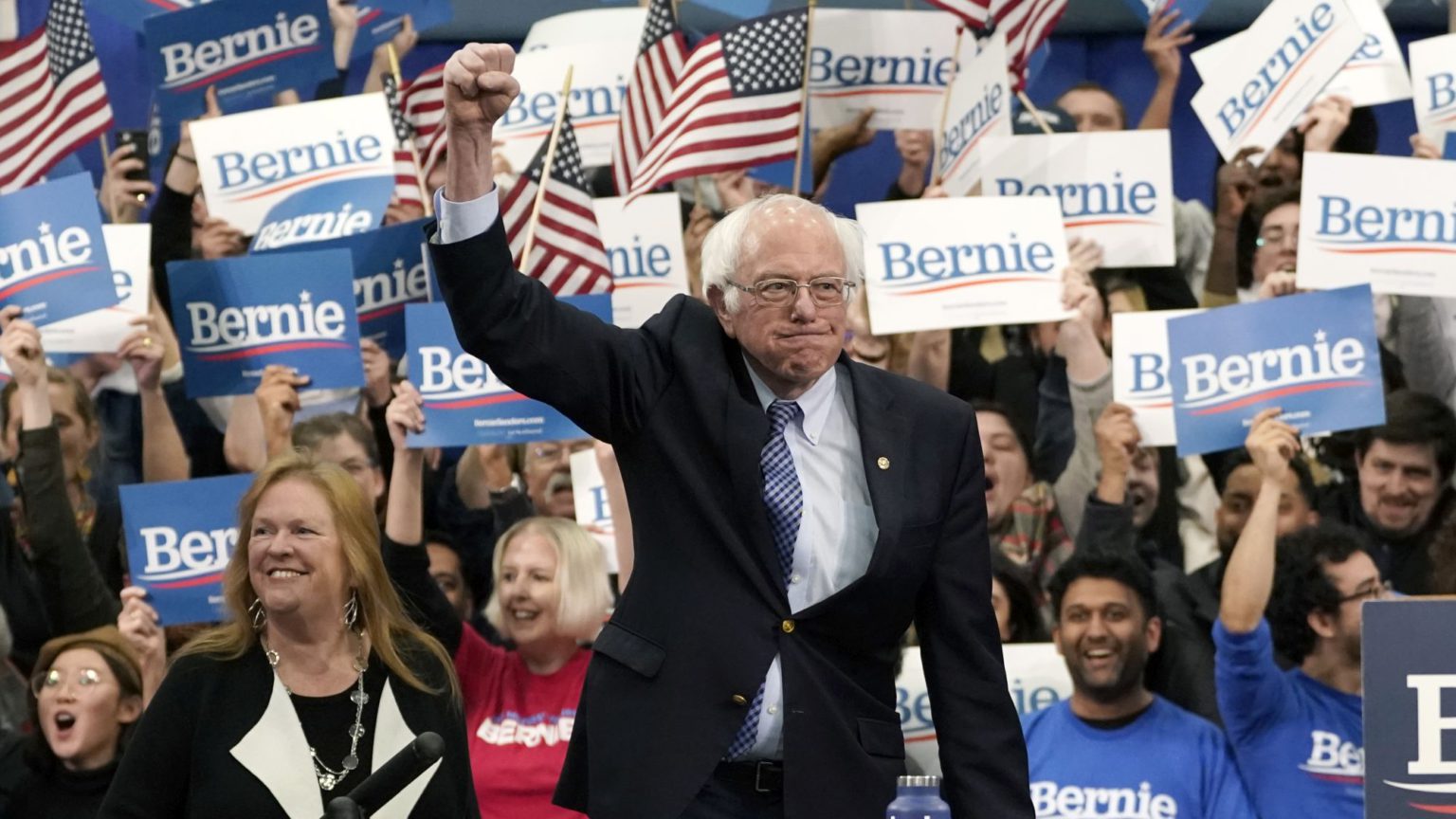 That Bernie Sanders, the frontrunner for the Democratic presidential nomination, is so deranging sections of the establishment suggests he is doing something right.

Ever since he gave Hillary Clinton a run for her money in 2016 he has come under sustained attack from elite voices on both the right and the left.

And as he heads into the South Carolina primary tomorrow, and Super Tuesday after that, the mad claims about him have hit fever pitch.

Many on the centre-right seem convinced that Sanders, a self-touting ‘democratic socialist’, is really a crypto-Stalinist, hellbent on destroying the American republic.

It ends with the charitable assessment: ‘No, Bernie isn’t Stalin. He claims to be a democratic socialist. I get it. But there’s an array of good reasons no one says, “Hey, let’s give democratic fascism a shot”.’

Billionaire investor Leon Cooperman said in a recent interview that Sanders is a ‘bigger threat’ to the stock market than the coronavirus, and accused him of being a full-on communist.

It is hard to overstate how insane all of this is. They are talking about a man whose primary policy in this campaign is a government-run health-insurance system, and whose vision for America, in his words, amounts to making it a bit more like Denmark.

That Sanders and his supporters (incorrectly) call this programme ‘socialist’ should not be enough for otherwise thinking people to decide that what he really has up his sleeve is gulags and a 21st-century great leap forward.

A more nuanced version of this attack line is that Sanders is more a useful idiot, who has sympathised with every authoritarian socialist and communist state going. But this has been blown out of all proportion.

On 60 Minutes this week, Sanders defended comments he’d made praising Fidel Castro’s education programmes in Cuba, while making clear he was ‘very opposed to the authoritarian nature of Cuba’.

At the Democratic debate in South Carolina this week he also called Cuba a ‘dictatorship’ – something his centrist billionaire rival, Mike Bloomberg, seems strangely incapable of doing when referring to China.

On the more ludicrous end of this mini Red Scare, neocon figurehead Bill Kristol got all upset recently that Sanders once said Soviet-era Moscow subway stations are beautiful. Even though they are, whatever else might be said of that brutal regime.

Sanders more ‘moderate’ competitors have also leapt on his supposedly dubious sympathies, as they have with the inevitable barmy panic about Russians potentially swinging the nomination in Sanders’ favour through the awesome power of Reddit and dank memes.

The centre-left commentariat, meanwhile, seems more focused on painting Sanders as just a slightly more acceptable version of Trump – as someone who is shouty, male, pale and stale, and whose supporters are insufficiently woke.

‘Racist, liberal whites seem to love them some Bernie Sanders’, said MSNBC contributor Jason Johnson recently – a pretty wild accusation he didn’t bother to back up.

‘The man cares nothing for intersectionality’, he went on, before dismissing Sanders’ black female spokespeople as hailing from ‘the island of misfit black girls’.

Other pundits have claimed that those who opt for Sanders over Elizabeth Warren are ‘showing their sexism’. (Warren also tried to claim that Sanders once told her a woman couldn’t be president, even though he reportedly encouraged her to run in 2016.)

What riles these people so much is that Sanders has an instinctive aversion to identity politics. When asked at debates what he will do for X, Y, Z community, he usually pivots to how his programme will benefit everyone – while his rivals dive headlong into intersectional wittering.

He has also committed the cardinal sin of saying that candidates should be judged ‘not by the colour of their skin, not by their sexual orientation or their gender and not by their age’, but by ‘what they stand for’.

What’s more, focusing on what can bring people together is a smart pitch at a time when vast majorities of all ethnic groups in the US say political correctness has gone too far. But this comment inevitably enraged the identitarian left.

Neera Tanden of the Center for American Progress said that ‘at a time [when] folks feel under attack because of who they are, saying race or gender or sexual orientation or identity doesn’t matter is not off, it’s simply wrong’.

Sanders’ critics have long chided him for primarily appealing to white, male, upper-middle-class graduates – the dreaded ‘Bernie Bros’, hectoring hipsters who are tin-eared to minorities’ concerns.

But this caricature is swiftly colliding with reality. While Sanders’ appeal was more limited in 2016, it’s a different picture now.

A poll out this week shows Sanders taking the lead among black voters – overtaking former vice-president Joe Biden, who has made his historic connection with African-Americans the central pitch of his campaign.

Sanders also racked up 70 per cent of the Hispanic vote at the Nevada caucuses. And a recent SurveyUSA poll indicates he is well ahead of the other Democratic candidates with Hispanic voters nationally, with around 40 per cent.

As for the idea that this is all just class war for rich kids, Sanders’ support, again according to Survey USA, is ‘concentrated among poor and working-class voters’ – though it does skew towards young men.

Sanders’ critics question whether he is electable. And indeed while polls suggest he is better placed than other candidates to win back voters in places like Michigan and Pennsylvania, things are still tight.

The word ‘socialism’ will no doubt ward off many voters. Trump is already calling him a communist. Similarly, Sanders’ comments on Cuba won’t help him in Florida, where there is a large community of Cuban exiles and refugees.

He has also made some major mis-steps that could undermine his support among blue-collar voters.

His call for a fracking ban, which would cost millions of jobs, will hurt Sanders in precisely the Rust Belt towns and cities he needs to win back from Trump – voters he would otherwise presumably appeal to.

Indeed, Sanders’ embrace of eco-alarmism is the Achilles’ heel of his putative populist programme.

As Sean Collins explains elsewhere on spiked, his proposals would hurt American workers, when embracing fracking and nuclear (which Sanders is also against) would actually be better for the economy and the climate.

But in any case, as MSNBC anchor Chris Matthews let slip last week, many Democratic moderates would probably rather Sanders lost against Trump than let him complete his hostile takeover of the Democratic Party.

Sanders is not the firebrand radical he is so often painted as. His programme is flawed, and while Sanders himself is uncomfortable with identity politics, millennial wokesters like Alexandria Ocasio-Cortez are among his most prominent supporters and surrogates.

Still, that he so grates against the establishment’s moral and economic orthodoxies reminds us how narrow and tightly policed that elite consensus is. And that he is even trying to channel – rather than just crush – the populist fervour that has emerged in recent years makes him a breath of fresh air.