Bernie’s green policies are an assault on the working class

His proposed bans on fossil fuels and fracking will cost millions of jobs and send energy prices soaring. 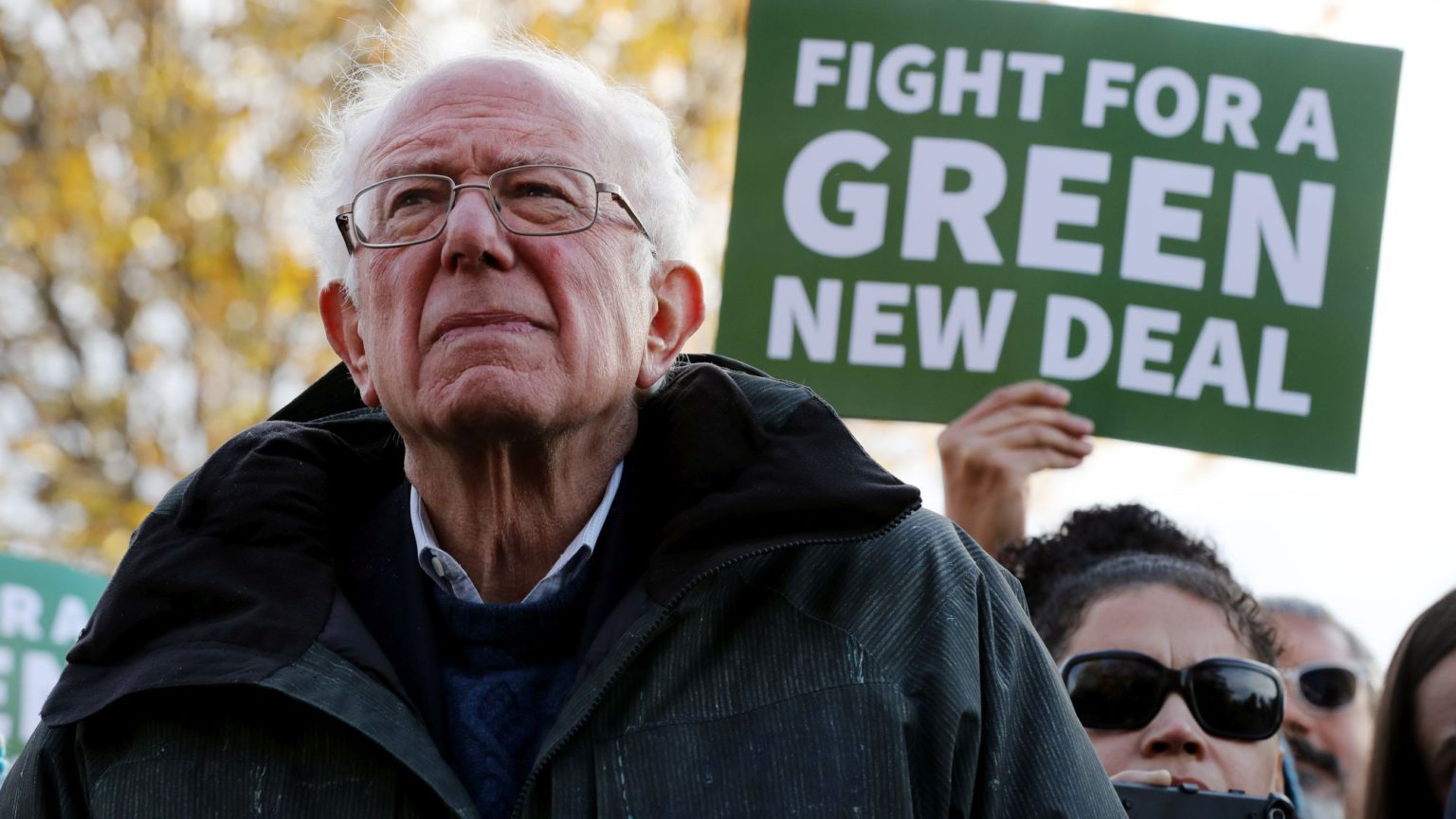 Fans of Bernie Sanders like to say he is a left populist, a politician who defends ‘the interests of working people’. That is a myth.

Sanders’ political agenda squarely reflects the outlook of a particular section of society: the ‘progressive’ wing of America’s upper-middle class, which forms his base of support. A look at his programme shows that Sanders is more aligned with the perspective of the faculty lounge than the shop floor. He is quite willing to override the views and interests of the working class – and even destroy their jobs – to pursue his brand of ‘socialism’.

Perhaps no issue demonstrates this reality better than Sanders’ environmental politics, which includes a ban on fracking and the introduction of a so-called Green New Deal. If enacted, his backward-looking green policies would be a disaster for workers. In France, Emmanuel Macron’s imposition of green taxes and austerity was a key spark to the gilet jaunes protests. A similar reaction among workers in the US could happen if Sanders got his way.

For many Democrats, climate change has become a matter of religious belief, not science or economics. Bernie has become their leading evangelist. To Sanders, the climate represents an ‘existential threat’ to humanity, a ‘global emergency’ and the country’s ‘single greatest challenge’. His rhetoric on climate change is as alarmist as that espoused by Greta Thunberg and Extinction Rebellion. A generation of school indoctrination has encouraged young people to believe that climate change will bring about the collapse of civilisation. For too many, this outlook has unfortunately become a defining part of their identity. The more scared and anxious youth are especially drawn to Sanders.

Rising temperatures and other effects from a changing climate are a serious problem, but exaggerated doom-mongering does not help. As the environmental author Bjorn Lomborg has noted: ‘The vision of climate change as the end of the world is unsupported. The UN’s Intergovernmental Panel on Climate Change estimates that by the 2070s, the total effects of climate change, including on ecosystems, will be equivalent to a reduction in average income of 0.2 to 2 per cent. By then, each person on the planet will be 300 to 500 per cent richer.’ In other words, climate change is a manageable problem we can deal with over time, especially if we invest our increasing resources and wealth in new technologies.

For all of Sanders’ alarmism over how the climate is an ‘emergency’ that needs to be addressed immediately, he rejects the energy sources that are here right now, such as natural gas and nuclear power, which have already done far more to reduce carbon emissions than renewables like wind and solar. Admitting that natural gas and nuclear can play a role in transitioning to cleaner energy, however, would take away the looming threat of apocalypse, which would render Sanders’ radical green proposals less necessary.

In recent decades, the US has reduced emissions by more than any other country in the world. The largest contributor to this has been the widespread adoption of hydraulic fracturing – aka fracking. US power plants have shifted from using coal – a carbon-intensive energy source – to natural gas, which is much cleaner.

Yet Sanders wants to ban fracking and shut down all gas plants. According to his recently introduced Senate bill, drafted with Alexandria Ocasio-Cortez, Sanders would immediately prevent federal permits for expanded and new fracking, and make fracking entirely illegal by 2025. To justify his ban, Sanders said fracking is a danger to the water supply, creates earthquakes, and adds to climate change.

These are tired arguments that have been disproved. Techniques used by the regulated fracking industry have also become safer over time. In reality, water-contamination incidents are few, seismic activity is insignificant and has more to do with wastewater disposal methods than fracking per se, and relatively minor methane emissions from fracking do not outweigh the net benefits for the climate that the technique brings. There are more than 250,000 fracking wells operating in the US – if there were serious problems, we would hear about them more often.

Fracking has been a huge economic boon for the US. The Brookings Institution, a liberal think-tank, found in 2015 that the benefits from fracking shale gas contributed to a net economic benefit of $48 billion per year, mainly due to lower energy prices, which benefit both industry and consumers. Fracking has also boosted state tax coffers, enabling more spending on social welfare, among other things.

During last week’s Democratic debate, Sanders was asked what he would say to the workers who would lose their jobs thanks to his ban. He didn’t back down: ‘The scientists are telling us that if we don’t act incredibly boldly within the next six, seven years, there will be irreparable damage done not just in Nevada, not just to Vermont or Massachusetts, but to the entire world.’ The immediate impact on workers’ livelihoods must be sacrificed to his green ambitions. ‘This is a moral issue, my friends’, he said. But apparently destroying jobs and livelihoods doesn’t factor into Sanders’ moral considerations.

Imagine what this sounds like to the ears of working people in a rust-belt state like Pennsylvania or Ohio, who desperately need the jobs and state revenues that fracking brings. As Donald Trump’s election showed, many workers in the middle of the country feel they are disregarded. And yet Sanders has joined the chorus of the coastal elites. These people enjoy the benefits of cheap and abundant energy, but look down on the icky process of extraction, and don’t think twice about eliminating the jobs of the people who do it. If Sanders does manage to win the Democratic nomination, his fracking policy would be likely to cost him votes in the general election in these areas. As a union official in Pennsylvania told the New York Times, ‘If we end up with a Democratic candidate that supports a fracking ban, I’m going to tell my members that either you don’t vote or you vote for the other guy’.

Sanders says workers in the fracking-related industries shouldn’t fear his axe, because his Green New Deal (also co-written with AOC) will – somehow – create 20million new jobs in the future. But for a plan that demands $16 trillion in new spending, the Green New Deal is remarkably short on details and long on magical promises. In addition to shutting down the low-emission sources of energy (natural gas and nuclear) that currently provide around 55 percent of the country’s electricity, the Green New Deal promises to eliminate all fossil fuels in just 10 years from now. It will make electricity ‘virtually free’ after 2035, and will ‘pay for itself over 15 years’.

Sanders’ plan has similarities with the approach Germany has adopted – the so-called Energiewende – which has hugely backfired. Germany has phased out nuclear power and has spent $580 billion on renewables, only to see electricity prices jacked up to among the highest in Europe. On top of that, the Germans have discovered how unreliable solar and wind are, forcing them to increase their use of coal as a back-up source. As a result, emissions have remained stubbornly high.

As energy writer Michael Shellenberger has pointed out, to see why the Green New Deal won’t work, you only have to look at Sanders’ home state of Vermont: ‘In 2005, Vermont legislators promised to reduce emissions 25 per cent below 1990 levels by 2012, and 50 per cent below 1990 levels by 2028, through the use of renewables and energy efficiency only. What’s happened since? Vermont’s emissions rose 16.3 per cent. That’s more than twice as much as national emissions rose during the same period.’

Shellenberger rightly concludes that Sanders’ plan is regressive, not progressive: ‘It would disproportionately hurt the poor by making them pay more for basic goods like food and energy. And it would slow economic growth by reducing labour-productivity.’ But what about all those jobs Sanders would create? They are low-skill and inevitably would be low-paid. ‘In boasting that [his plan] will create 20million more jobs’, Shelllenberger writes, Sanders ‘is pointing to the reason why energy prices would rise. Making anything more labour-intensive makes it more expensive.’

Sanders’ green politics are not a minor side issue in his campaign – the Green New Deal is one of his most high-profile policies. It shows that his vision of the future is limited: it is not about growing and transforming the economy, investing in new technology, and giving workers more control over their lives. A campaign that is promising to throw hundreds of thousands out of work is not about to give workers more agency. In an era in which more people have voiced demands for more say and more control over their lives, Sanders proposes a top-down approach that centralises more power in the state, prioritising abstract global concerns over real lives in local areas.

Bernie says there is a moral imperative to support his green politics. Those are his morals, not ours.