A rebellion that the establishment loves

Why our usually illiberal establishment has been so chilled out about XR’s week of vandalism. 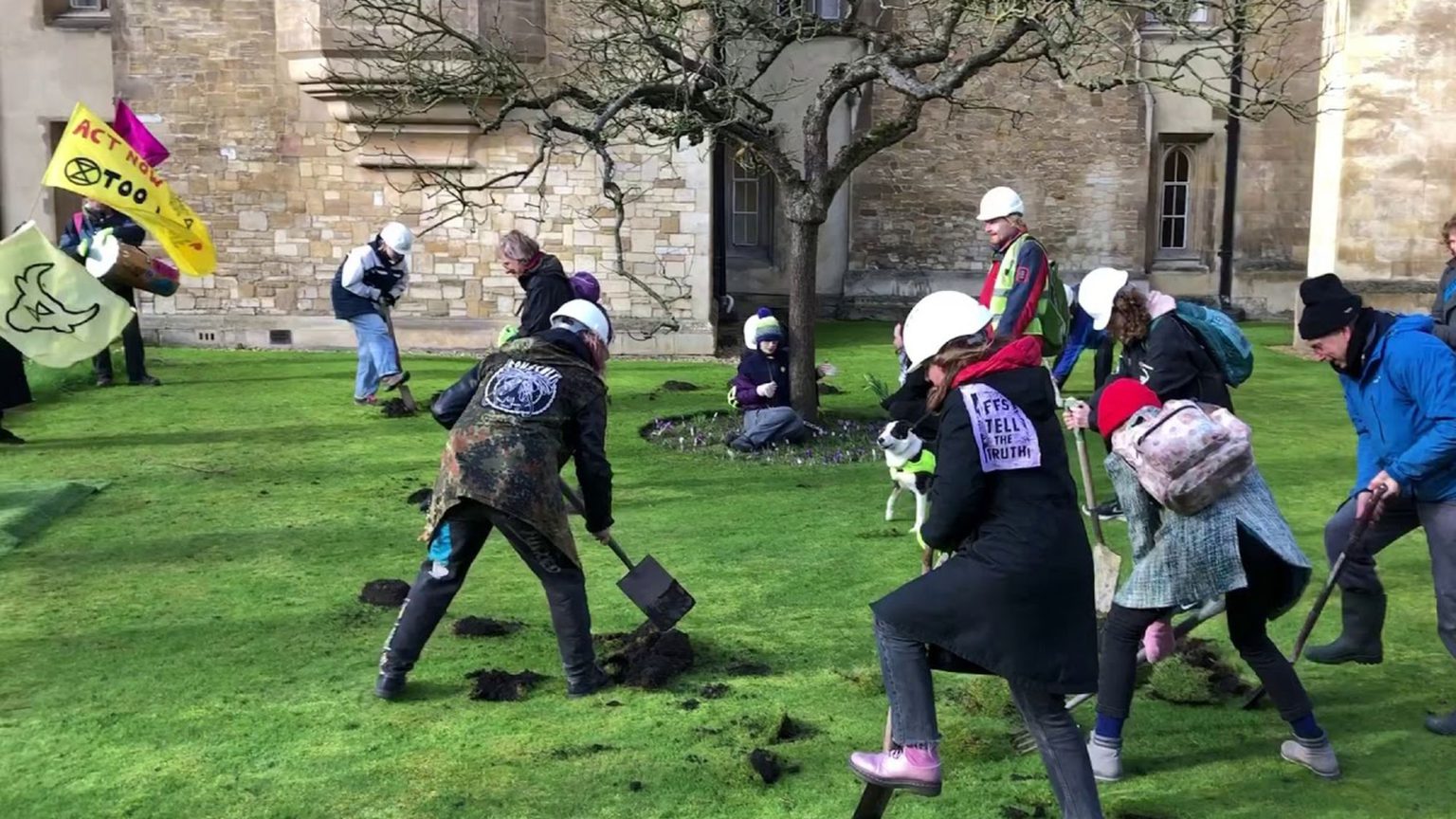 Extinction Rebellion (XR) protesters in Cambridge have launched a week-long campaign of obstruction and petty vandalism.

It began with the protesters issuing demands to Cambridge City Council to hold a citizens’ assembly on climate change, to Cambridgeshire County Council to organise a ‘just transition’ from fossil fuels, and to Cambridge University to cut its ties with the fossil-fuel industry. When the demands were not met, XR set about occupying the council chamber, blocking roads in the city centre, and digging trenches into the neatly manicured and near-ancient lawn outside Trinity College.

‘This is what democracy looks like’, chanted the protesters as they marched with spades and wheelbarrows to Trinity College lawn. Then they tore up the turf while chanting ‘digging for oil’. It was supposed to symbolise the environmental destruction caused by the oil industry, as well as highlight a more local concern: Trinity College’s plans to sell some of the land it owns in nearby Ipswich to property developers.

By any measure, the Trinity College stunt was a pathetic, infantile performance. Rather than speaking to the world, the feeble, moronic chanting made it sound like the protesters were trying to convince themselves that there was some justification for their actions. ‘We’ve come here today, because Trinity [College] does not value the land that is for our common good’, explained one protester. ‘So we’re going to show them that we don’t value their precious grass outside their college. It seems a fair comparison’, he added. Is it really?

Most people watching the protests, in person or on the news, could only see petty vandalism. For most people, the stunt did not raise burning questions about land use or the wrongs of colleges owning investments in energy companies. In fact, the question that most people wanted answered was, ‘Why have these people not been arrested?’.

It is an important question. You do not have to look hard to find cases in which the police and local authorities have demonstrated near-zero tolerance of things that barely meet the category of ‘public disorder’. In recent years, the ever-expanding regulation of public space has led to buskers, beggars and pamphleteers finding themselves on the wrong side of the law. Highly subjective interpretations of what may constitute ‘offensive’ behaviour have been used by police and local authorities to crack down on all sorts of innocent activity and speech. That is not to argue for the increased regulation of protests. But if blocking roads, criminal damage and the blocking of local democracy are not public-order offences, then what are?

Criticism has quickly turned to the authorities. Rather than using their powers to clear the Extinction Rebellion protesters from their roadblock in the town centre, the police shut the roads and diverted traffic. In effect, this gave official sanction to the roadblock. According to a police spokesman, the police had to balance the right to protest against the offence of obstructing highways. Similarly, Trinity College was initially reluctant to make a complaint of criminal damage against the protesters. When officers first turned up, no complaint was made. The college later changed its mind and arrests were made on Tuesday afternoon.

Perhaps the most revealing stunt was the occupation of the city-council chambers, which forced the council to end a budget meeting. Tilly, an XR protester and student, was quizzed by a local news reporter, who asked why she felt she had the right to override local democracy. ‘I take umbrage with the idea of the council being democratic’, she responded. ‘We do not feel that the democracy we have is fit for purpose… It is not representative.’

However valid that criticism may be – and there are many good reasons for questioning the quality of both local and national democracy – it seems unlikely that a truly representative democratic process would be of any help to the green movement. Radical greens have never managed to win the public’s support.

Take XR founder member, Rupert Read, for instance. Read stood for the Green Party in Cambridge Borough in the 2015 General Election: he won just eight per cent of votes. In subsequent elections, Green Party candidates won just two per cent and four per cent. This was not enough votes to get their deposits back, let alone represent the people. And this is not just a case of first past the post hurting smaller parties. Read has also stood in European elections which are run by proportional representation. In 2014, he stood at the top of the Green Party list in the East of England but won just 8.5 per cent, failing to become an MEP. People walking to the polls to register their views is what democracy looks like.

Nevertheless, without any explicit backing from the voters, Cambridge Council declared a ‘climate emergency’ in early 2019, just as Extinction Rebellion had demanded.

The problem for zealous greens like XR is not that the system is rigged against them – it is that the political establishment has already absorbed their ideology. The government, all of the major political parties, universities, businesses, the media and virtually all public institutions are in alignment on the notion of a ‘climate emergency’. This has left the most extreme greens powerless to do anything other than organise pointless protests and demand ever-more stringent, absurd and entirely unrealistic policies.

XR is not an anti-establishment campaign against the authorities, demanding a truly representative democracy. Rather, it is a campaign that calls for the suspension and bypassing of the democratic process. It calls on the authorities to press harder on the public and to make drastic cuts to our living standards.

Extinction Rebellion is not a ‘protest’ movement in any meaningful sense. Protest movements have clearly articulated grievances, a constituency whose interests are represented, and they are united behind coherent aims. XR’s stunts are merely the tantrums of an indulged and spoilt class. They may call themselves ‘protesters’ and ‘rebels’, but the police treat them with kid gloves for a reason – their demands resonate with the authorities much more than they do with the public, who are largely fed up with all the pointless disruption. Even in this era of self-identification, Extinction Rebellion has as much chance of becoming a genuinely popular movement for change as I have of being the next leading ballerina at the Royal Ballet.

The political establishment is relaxed about XR and its seemingly anarchistic methods because beneath the superficial artifice of ‘protest’ it represents no threat whatsoever. The political class would gladly and immediately implement XR’s demands. What stops them is the very real possibility that imposing such draconian cuts to living standards would quickly unite the public once and for all on the issue of climate policy… against it. Thankfully, democracy is not dead yet.