Finally, we have left the European Parliament 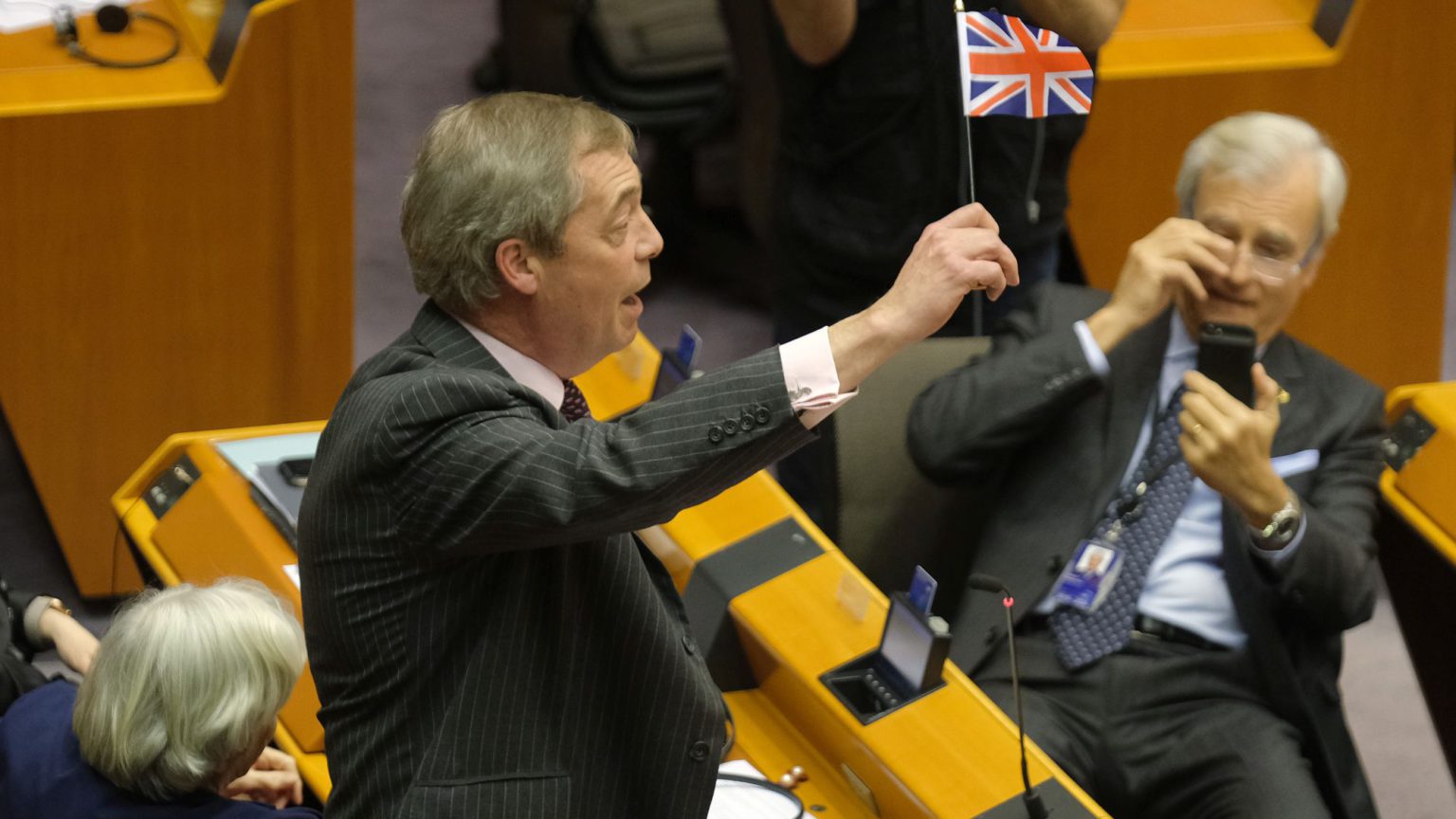 It was fitting that the final footage of Nigel Farage inside the European Parliament was of his microphone being hastily switched off mid-sentence by a visibly prickly chairwoman. Farage was told off for brandishing a tiny, 10x15cm Union flag. ‘Put your flags away. You are leaving. And if you are leaving now, take them with you’, she sternly instructed with matronly clarity.

And so we did, our little nylon standards held aloft as the other Eurosceptics waved us off vigorously. Meanwhile, the perpetually mournful EU zealots in the rest of the hemicycle broke into an uncomfortable rendition of ‘Auld Lang Syne’. It was typical to see the rules of parliamentary procedure applied unevenly. ‘Part 10, subsection three’ was cited to rid us Brexit Party MEPs of our national flags, but the chair was strangely deaf and dumb to the singing in the chamber, which is also prohibited. Of course, every EU rule is designed to be interpreted solely by the powers-that-be as they see fit.

Earlier in the debate, we were subjected to the feverish rantings of Guy Verhofstadt, who was allowed to spill opulently beyond his three-minute allocated slot into an almost eight-minute proselytisation on the lessons of Brexit. According to Verhofstadt, dissent from the EU should be prevented by creating a full-on legal straitjacket, rather than granting concessions or so much as a slither of additional say to member states.

Farage, on the other hand, made a small symbolic nod to the country he has been elected to represent for over a quarter of a century. He was silenced for even alluding to the existence of the nation state. But if the nation state is so problematic, it begs the question of what the European Union is a union of, exactly.

The revulsion at any kind of plurality or heterogeneity among EU elites has become quite breathtaking, particularly when observed up close on a daily basis. Perhaps it was no coincidence that the vote on the Brexit withdrawal agreement was scheduled to fall in the same week as Holocaust Memorial Day. Cue swathes of MEPs with rheumy eyes drawing connections between the Second World War and the dangers of populism and the purportedly tragic matter of the UK withdrawing from ‘Europe’ – a continent for whom the UK fought, twice, at the cost of millions of lives, to ensure peace.

The new commission president, Ursula von der Leyen, spent a full half-hour pontificating about the virus of European conflict and the necessity of the EU as the only linctus. Just as well that Von der Leyen, the disgraced former German defence minister, responsible for crippling her own nation’s armed forces, will be tasked with overseeing a fully integrated European foreign and defence policy as part of the next strident step to be taken by the emerging government of Europe.

Nobody on the pro-sovereignty side even dared mention that the two wars were fought to protect the integrity of sovereign states over imperialist continental ambitions, spearheaded by Germany. Even the suggestion of this inconvenient history would have EU fanatics reaching for the rules on hate speech. It was therefore quite fitting that as a reward for their six months of service, all of the outgoing British MEPs were given an encased, exclusive edition of the European Union’s own tome on European history. I will most certainly be filing this in my non-existent library under the category ‘Revisionism’.

Remainer MEPs – who would not have even been elected in the first place had Theresa May’s government delivered Brexit on time – staged a histrionic ceremony before leaving. MEP after MEP took turns in the hemicycle to decry the referendum result as the product of dark powers, Russian subterfuge and mass brainwashing. At the same time, MEPs insisted that a bloc established in 1957 was responsible for the transition to European peace in 1945. It’s an interesting interpretation of history that NATO, with headquarters just a couple of kilometres up the road in Brussels, might have something to say about.

As the EU’s acolytes gather tomorrow for the lowering of the Union flag, which will be exhibited in the ‘House of European History’, one has to wonder whether the other 27 national standards will soon follow. Having witnessed first-hand the EU’s myopic ambition to create not a federal bloc but an all-powerful Government of Europe, I’m convinced that the countries which don’t jump will inevitably be consumed by something nobody ever voted for.