It’s the fifth anniversary of the Islamist massacre of the satirists. 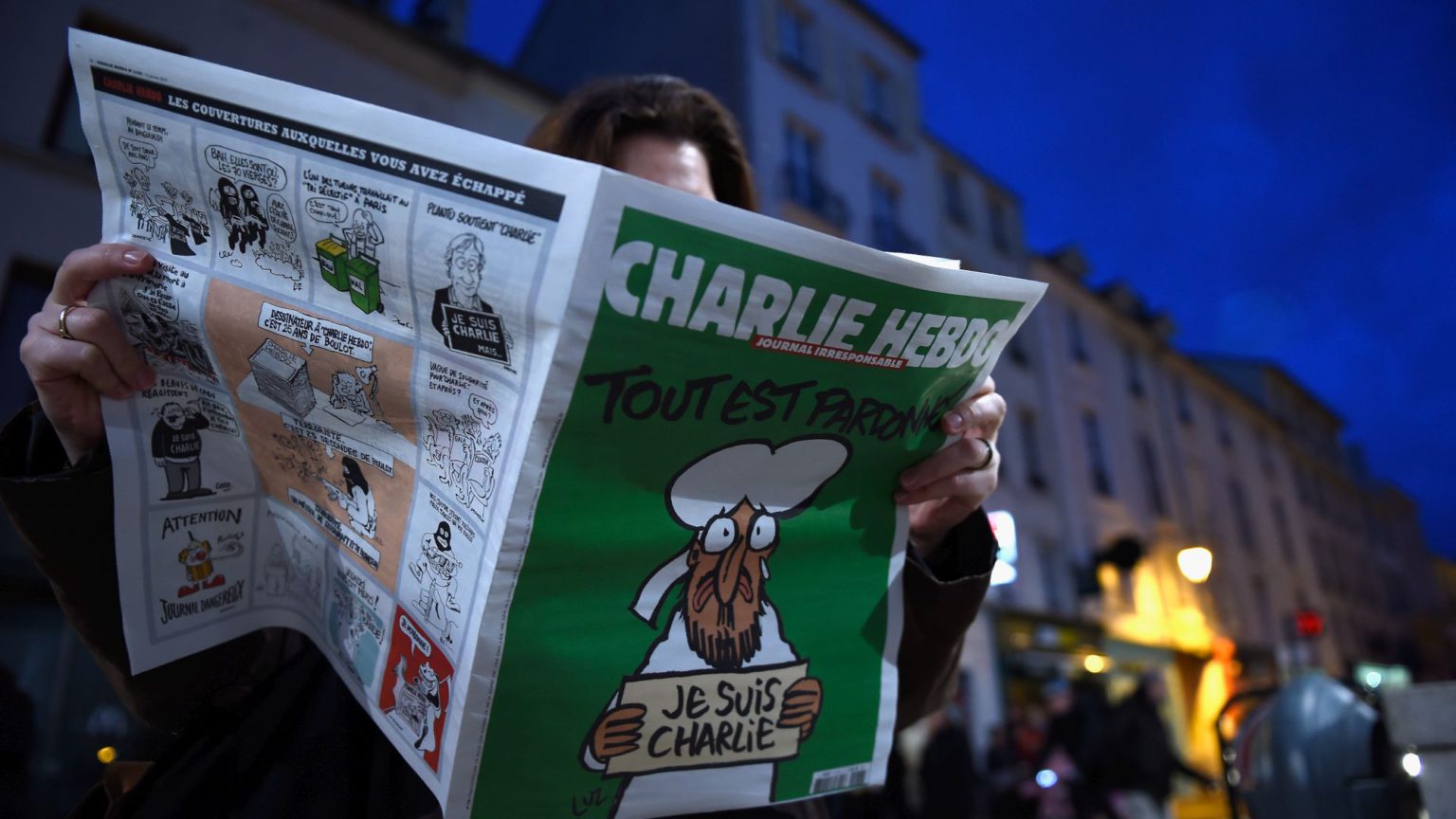 Today is the fifth anniversary of the massacre at Charlie Hebdo. Five years since one of the darkest days in the modern history of the French Republic, when 10 journalists and cartoonists, as well as a maintenance worker and a police officer, were massacred by two Islamist gunmen for the ‘crime’ of blaspheming against Muhammad. Five years since people were executed for making jokes, for mocking a deity, for upholding the hard-won liberty to ridicule all faiths, ideologies, dogmas, gods, prophets and fads.

And here’s the scary thing: in those five years, too many in the West have failed to learn the lesson of that horrific day. Instead of defending freedom of speech as the core liberty of European society, too many so-called liberals are actually propagating the foul ideology of the killers themselves, albeit in a peaceful way, by demonising and even punishing people who criticise Islam or any other belief system that the PC set deems to be beyond criticism.

It was a Wednesday morning, 7 January 2015, at 11.30am. The radical Islamists, brothers Saïd and Chérif Kouachi, forced their way into the offices of Charlie Hebdo in Paris and used rifles and submachine guns to slaughter the employees of France’s famously godless and satirical weekly magazine. Many of Charlie Hebdo’s best-known writers and illustrators were murdered, including Stéphane Charbonnier, known as Charb, who had been editor since 2009. He was a fierce defender of freedom of speech, including the freedom to make fun of Islam. Asked by the Associated Press in 2012 why he thought it was acceptable to depict Muhammad in a derogatory fashion, he said: ‘Muhammad isn’t sacred to me. I live under French law, not Koranic law.’

The massacre revealed a great deal about the deranged loathing for liberty that exists among radical Islamists. But it was the response of the West’s own political and intellectual elites that highlighted just how thoroughly Western society has lost its way and how fully it has jettisoned the ideals of freedom. Initially, the response was positive. French people in particular were defiant: on 11 January, four million of them took to the streets, 1.6million in Paris, to chant ‘Liberté, Charlie!’ World leaders joined the marches, too (in a highly staged fashion). ‘Je suis Charlie’ became the slogan of the day. The issue of Charlie Hebdo that came out the week after the massacre – the production of which was itself an extraordinary and heroic feat – sold seven million copies; the mag normally sells around 40,000.

But this stirring solidarity and defence of liberty did not last long. Rumblings emerged within the cultural elite about whether Charlie Hebdo really should be defended. Didn’t the magazine bring the massacre upon itself by insulting Muslims, some liberals wondered? In April 2015, numerous prominent writers – including Peter Carey, Michael Ondaatje and Joyce Carol Oates – scandalously protested against PEN America after it said it would give its freedom-of-expression prize to Charlie Hebdo. They said it was wrong to reward a magazine that had caused ‘humiliation and suffering’ to French Muslims.

This fed into a broader debate about the problem of Charlie Hebdo ‘punching down’ – that is, using its free speech to mock Muslims rather than to target true power structures. Leaving to one side that Islam is a vast religion with a billion adherents – and thus is a pretty powerful ideology – the more important point is surely that freedom of speech can be used for any end the speaker chooses. That’s the point of it. Nonetheless, Doonesbury cartoonist Garry Trudeau joined the chorus of Charlie attackers and said the mag had committed an ‘abuse of satire’ by always ‘punching downward’.

The day after the massacre, when its offices were still stained with blood, Slate denounced Charlie Hebdo as racist. In France, Muslims are a ‘poor and harassed minority’, Slate said, and it is wrong that people like Charlie Hebdo use ‘liberal values like secularism and free speech to cloak garden-variety xenophobia’. It is tempting to accuse Slate of dancing on dead cartoonists’ graves, but they hadn’t even been buried by that point. Islamist organisations agreed with liberals who branded Charlie Hebdo racist: less than two months after the slaughter, the Islamic Human Rights Commission gave the magazine its ‘International Islamophobe of the Year’ award.

These almost instant expressions of discomfort with, or outright hostility towards, Charlie Hebdo spoke to the broader crisis of freedom in the West. Freedom of speech is now under almost constant assault in Western institutions. From the political sphere to university campuses, from hate-speech laws to workplace speech codes, it is now broadly accepted that speech can be controlled to the end of ‘upholding diversity’ and protecting minority groups in particular from offence.

And here’s the thing: it was this very notion that it is wicked and racist and unacceptable to say offensive things or to question minority belief systems that fuelled the two killers themselves. Indeed, their massacre of the satirists can be seen both as an Islamist outrage and as the armed wing of political correctness; as the use of extreme violence to enforce a mainstream ideology – that the right to offend must be curbed in order to protect certain social groups from feeling ‘humiliated’.

When those novelists denounced PEN America for celebrating a magazine that had caused ‘humiliation and suffering’ with its words and images, they were expressing in a more erudite, non-violent way the sick ideology of the Kouachi brothers themselves: that words hurt, that a picture of Muhammad humiliates us, that offensiveness can cause suffering. The liberal elite’s equation of words with violence, where they argue that words can cause serious pain and feelings of ‘erasure’, is incredibly dangerous. First, because it logically gives rise to censorship. And secondly, because it convinces some people – most notably the Kouachi brothers, but others too – that violence is sometimes a legitimate response to words. After all, if words are violence, can’t they sometimes be met with violence?

This is what is so haunting about Charb’s free-speech plea, his reminder to his critics that he lives under French law, not Koranic law – France itself has illiberal laws that can chastise criticism of Islam. Indeed, in 2007 there was an unsuccessful attempted prosecution of Charlie Hebdo for insulting Muslims. The French novelist Michel Houellebecq was also charged under hate-speech laws after he he called Islam ‘the stupidest religion’ (he was acquitted). Across western Europe, the idea of ‘Islamophobia’ is used to demonise and censure those who raise critical questions about Islamic beliefs and practices.

All of this – all of these laws, all of the speech codes, all of the branding as ‘Islamophobes’ anyone who mocks the niqab or the Koran – sends a message to radical Islamists. It tells them their religion must never be criticised. It tells them Islam’s critics are racist (a new way of saying ‘evil’). It green-lights their violent intolerance. Mainstream censoriousness inflames extremist violence.

Five years on, our response to the Charlie Hebdo massacre must be to defend freedom of speech for everyone. For every blasphemer, every unorthodox thinker, every un-PC cartoonist, every offensive comic, every free-wheeling politician, and every citizen who wants to make fun of religion or oppose mass immigration or say that people with penises are not women and never will be. There should be worldwide events to mark Charlie Hebdo Day today. That there aren’t reveals how little backing freedom of speech now has in political circles. Let’s change this so that on the tenth anniversary of this act of censorious and Islamist barbarism, people will gather to say once again: ‘Je suis Charlie.’