This year belongs to the Quiet Australians

The illiberal left grows ever louder, but ordinary people are having none of it. 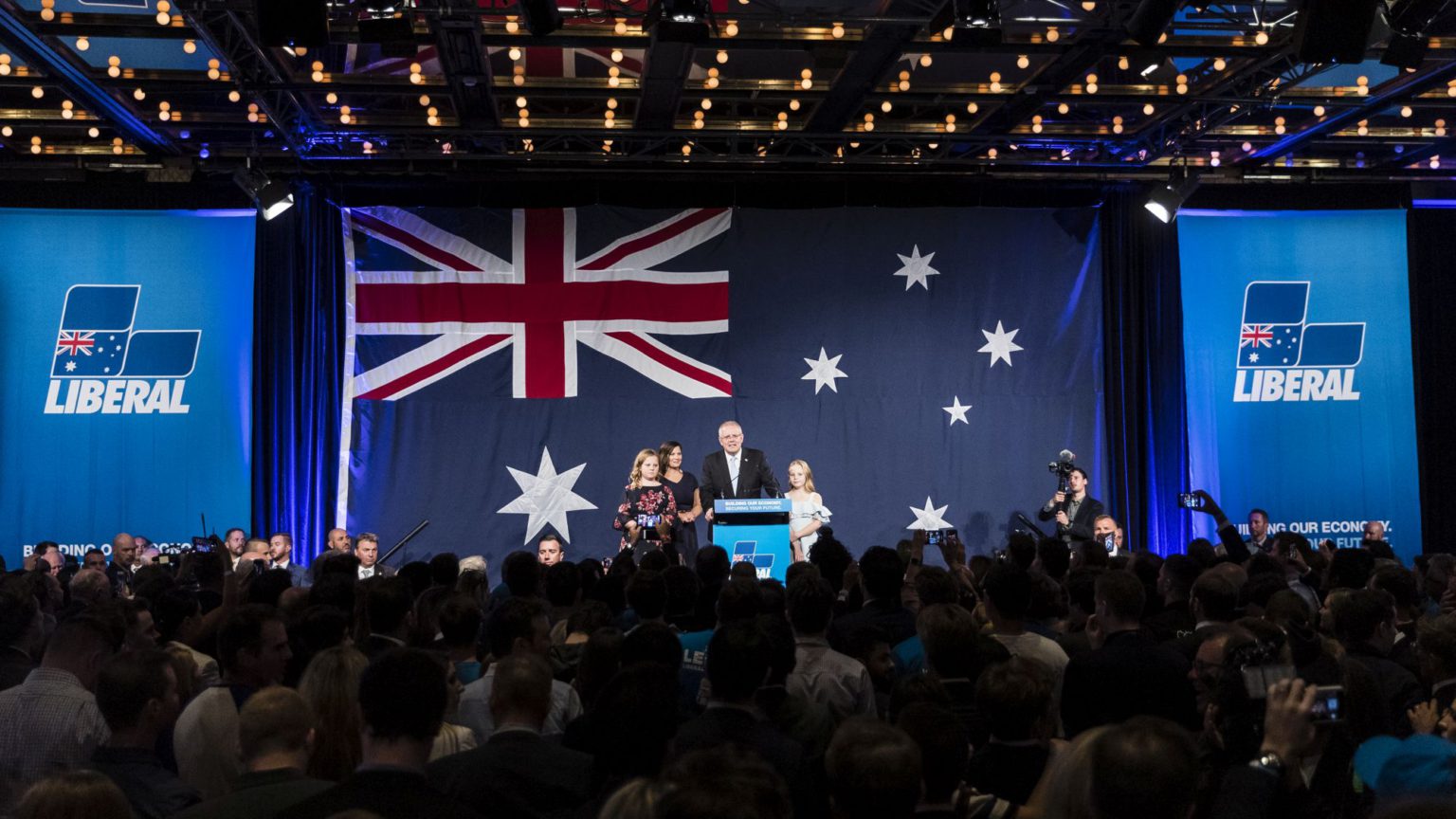 Australia’s spotless record of transitioning power without recourse to violence remains intact, unless you count the ugly incident with a corkscrew.

In the week before Scott Morrison’s historic election victory in May, a Sydney resident in an apparent state of rage about climate change or some such, inexplicably inflicted mild wounds on a supporter of former prime minister Tony Abbott.

That this minor entry in a police officer’s notebook should hit the front page is proof of what a civilised democracy Australia generally is.

Yet here, as in Britain, there is a flourishing school of thought that democracy is failing. It is a belief that justifies resorting to extra-democratic means to settle arguments and raises the temperature of social-media debate.

Happy country or hopeless country? Where one stands on this question depends on whether one is a quiet or a noisy Australian, terms coined by the prime minister, Scott Morrison, to describe the contemporary cultural faultline in this well-blessed nation.

That Morrison’s terminology requires no elaboration to an international audience demonstrates how ubiquitous the divide has become in societies where open debate is allowed after two decades of 21st-century life.

In fairness, the divide has existed since history began to be recorded. The Zapotec priesthood, for example, exhibited all the characteristics of a noisy, needy and conceited elite as far back as the 4th century BC, when they extracted corn from Mesoamerican peasants in return for weather forecasts.

Yet never has the presumption of superior knowledge been so democratised as it is today in our highly educated time, nor its bearers so organised as they fight to have their way.

Watching the federal election count on a lovely Sydney autumn evening in May was possibly the most pleasant accompaniment to a cold beer I can remember in my three decades as a citizen of this country.

Having spent the day testing the mood at booths in Sydney’s far western suburbs, it was apparent there was only one way the vote could go. The pundits, however, remained convinced that Labor’s pledge to tax retirement savings and introduce job-destroying renewable-energy targets would be a hit with the middle class, right up until 8.25pm when the ABC’s election expert, in an apparent state of anaphylactic shock, called the result for Morrison.

It was an evening of schadenfreude that left one crying out for seconds.

There is nothing like a good, clean popular vote to reset the civic debate, as Boris Johnson’s victory was to do later in the year in Britain.

The results of the postmortem the Labor Party held into its defeat suggests it is not unaware of its problem, but it is clueless how to fix it in a world where the act of virtue-signalling threatens workers’ livelihoods and comfort.

Had the right to vote been stripped from citizens aged over 35, the Labor Party would have romped home, as Corbyn would have in Britain.

Exit polling indicates Labor was the preferred party of the educated professional classes, but not for the workers, the people in whose name it is supposed to exist.

Morrison’s victory, apparently against the odds, gives him command of a party more united than at any time since 2007. He is odds-on to become Australia’s first prime minister since John Howard to survive for a full term without being ousted by his colleagues.

Morrison has used his authority to declare war on the Blob, as Michael Gove famously called the expanding and apparently indestructible bureaucracy.

Bureaucracy-busting is his stated mission. His planned restructuring of government departments and his instructions to his ministers are aimed at reminding the mandarin class who is really in charge.

As Australia’s world-beating run of uninterrupted economic growth enters its 29th year, its citizens are enjoying the fruits of both prosperity and complacency.

Since the growth is largely sustained through the export of resources and the import of migrants, the underlying structural problems are little appreciated and, as a result, politically challenging to address.

The focus on reform remains fixed on the banking sector, a whipping boy upon which Quiet Australians can vent their frustrations on corporate bureaucracy in general.

Concern about sharp practices by banking executives is understandable in a nation where private wealth is spread more liberally and more widely than almost any other.

The list of economic challenges is long, however – energy prices, productivity and corporation taxation are among them, three policy areas in which Donald Trump’s US is leading the way.

Morrison’s victory failed, not unexpectedly, to settle the burning totemic issue of his times, climate change, or as some would have us call it, the climate emergency.

Energy policy was one of the biggest factors in the election and it was won by Morrison who framed it as an economic debate rather than a moral argument.

On this, as in every other policy issue, the Quiet Australians occupy the middle ground. They take care to recycle their household waste, pick up litter in the street and believe in taking reasonable precautions against future risk, providing there is not too great a cost.

The noisy minority, however, have become increasingly noisy, gluing themselves to the tarmac, serenading the prime minister by playing the bagpipes outside his Sydney residence, encouraging schoolchildren to strike and generally carrying on in a manner unbecoming to themselves and unhelpful to sensible discussion.

Their enthusiasm has been fanned by a drought in western districts of New South Wales and Queensland that is spreading to Victoria.

They justify their alarm with reference to bushfires and the smoke which has hung over Sydney for much of the late spring and early summer.

Bushfires are a natural feature of the Australian landscape that long predates the arrival of humankind. Plants and animals have evolved in tune with their cycle, regenerating through the burnt earth.

This year, bushfires have come to divide Australians. That climate change might increase the likelihood and severity of bushfires has the ring of truthiness to it and warrants investigation.

Yet at this stage it is little more than a hunch without a firm empirical foundation. It may remain so, given the challenge of finding a reliable historical measure.

Bushfire season used to bring Australia together, inspiring private donations for its victims. Today it has become a burning stake by which to identify witches.

The inane question ‘do you accept that bushfires are proof of climate change?’ has become the stock-standard gotcha question for politicians and even fire chiefs appearing on the ABC.

Morrison has become the prime suspect, hauled before this tainted jury as the man we must blame for the smouldering undergrowth and destroyed homes.

Morrison’s ‘inaction’ on climate change may be the stated charge, but like President Trump’s impeachment, we suspect his real crime is his refusal to tip his hat to his accusers’ wokish nonsense.

Canada’s leader Justin Trudeau, we note in passing, is not yet being held responsible for the melting of the Arctic permafrost. Australia’s ‘inaction’ on climate has led to a 12 per cent reduction in greenhouse-gas emissions since 2005. Canada’s efforts have reined in emissions by only two per cent.

The centre-right may be good at winning elections these days, but it doesn’t mean it wins the argument.

Nick Cater is executive director of the Menzies Research Centre and a columnist for the Australian newspaper.