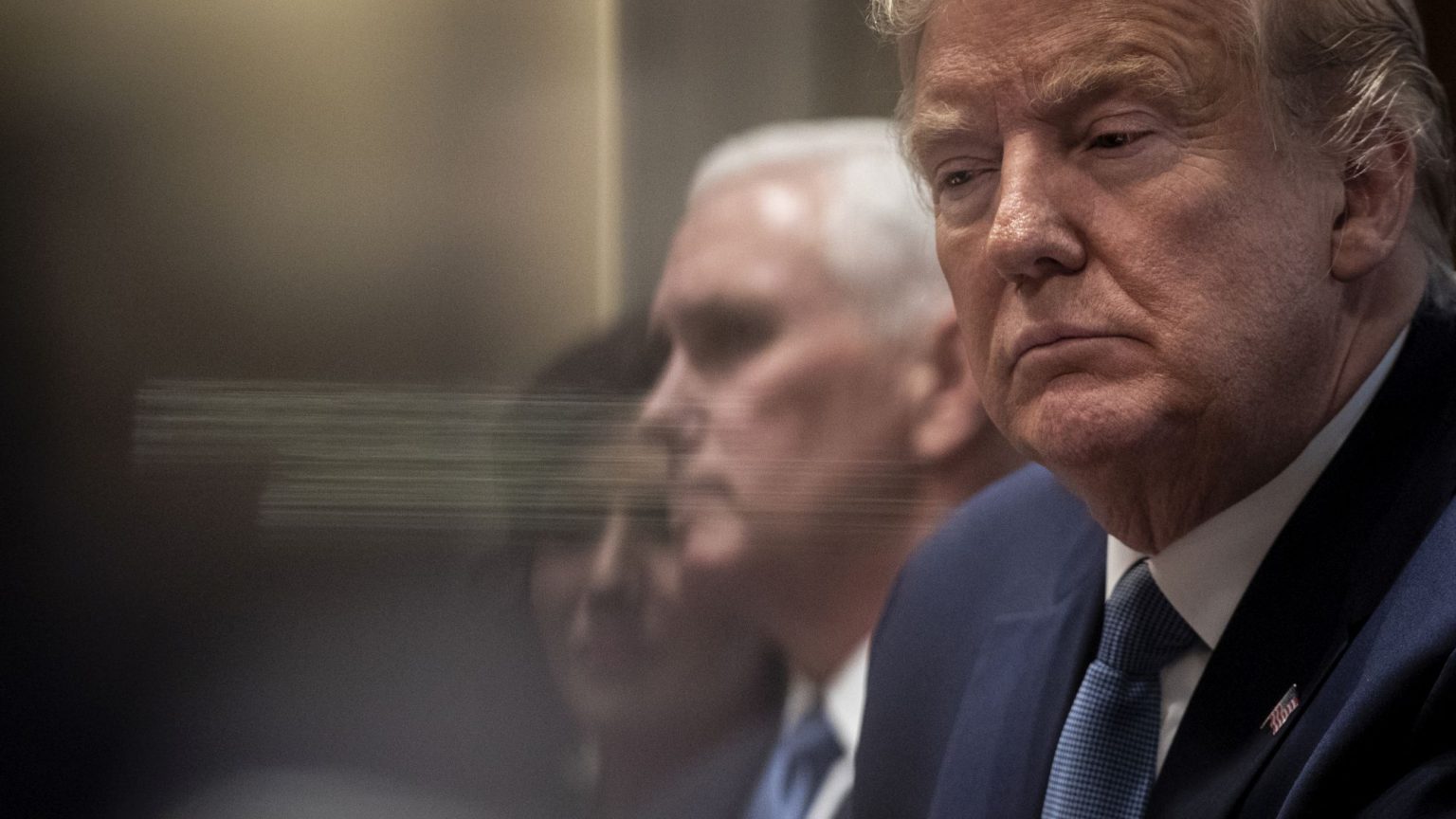 This is an abuse of the power of impeachment

The vote to impeach Trump is a cynical attempt to subvert democracy.

In 2016 there were two huge disruptions to the political systems of the UK and the US: the vote for Brexit and the election of Donald Trump. The political elites in both countries responded in remarkably similar ways to these parallel populist shocks – they claimed they were illegitimate, denounced their supporters as thick and deplorable, and did everything in their power to overturn the results.

Amazingly, for three long years since 2016, the establishments of both countries have refused to accept the reality of these democratic votes and have fought to reverse them. Now, with the recent UK General Election, the Remain opposition to Brexit has lost badly, perhaps for good. But the US political establishment, mainly in the form of the Democratic Party, continues its mission to bring down Trump.

This three-year campaign is the backdrop to yesterday’s vote by Democrats in the House of Representatives to impeach Trump. House leader Nancy Pelosi says the Democrats sought impeachment reluctantly, ‘with a heavy heart’. Yet the truth is her party was eager to oust Trump before he even entered the White House, and has been ever since.

In December 2016 – a month after Trump’s election, and before his inauguration – Vanity Fair noted that ‘Democrats are paving the way to impeach Donald Trump’. On Trump’s inauguration day in January 2017, liberal activists posted an online petition calling for his impeachment. By April, congresswoman Maxine Waters was exhorting protesters in Washington to ‘Impeach 45’. In June 2017, two Democrat representatives, Al Green and Brad Sherman, initiated formal impeachment efforts.

One year after Trump entered office, Green forced a (losing) vote in congress to impeach on the grounds of ‘Trump’s travel ban, his call to stop transgender people from serving in the military, his statement that some white supremacists in a Charlottesville rally were “very fine people”, and attacks on NFL players who took a knee during the national anthem as a statement against police brutality’. In the Midterm elections in November 2018, a number of Democrats ran on a Remove Trump platform. Newly elected congresswoman Rashida Tlaib vowed, to great acclaim from the party’s base, to ‘impeach the motherfucker’.

Of course, the main endeavours to bring down the president centered on allegations that he colluded with Russia to fix the 2016 election. Liberals’ hopes were pinned on the Mueller investigation, to the point of weird adoration of Mueller, including votive candles. Cable TV hosts like Rachel Maddow imagined vast ‘connect the dots’ conspiracies on a nightly basis. But these hopes crashed on the rocks of Mueller’s report, which found no evidence of collusion. Attempts to pin an obstruction charge on Trump fell flat when Mueller failed to back that up as well.

This is the context in which Democrats viewed Trump’s now-infamous telephone call with Ukraine’s leader. Deeply disappointed that the Mueller report didn’t deliver, Democrats seized upon the whistleblowers’ complaint and call transcript to resurrect their long-standing campaign to impeach Trump. The cursory and rushed way in which Democrats conducted the impeachment investigation into Trump and Ukraine – not setting up a special prosecutor; not seeking the testimony of key witnesses, including national security adviser John Bolton; insisting on a vote before Christmas – provides proof that Democrats already knew the outcome they wanted, and were not engaged in a serious search for the truth. As Minnesota Democrat Collin Peterson, one of only two House Democrats to vote against Trump’s impeachment, put it, the ‘biggest problem’ with the impeachment process was that Democrats decided in advance that they were going to impeach Trump ‘and now they’ve spent a year trying to figure out how they can make a case for it. That is just backwards.’

Democrats, of course, argue that Trump’s pressure on Ukraine to dig up dirt on Joe Biden, the former VP and Democrat seeking to run against Trump in 2020, is sufficient to impeach him. But the articles of impeachment they drafted fall short of the constitution’s bar of ‘high crimes and misdemeanours’. After months of alleging serious crimes of ‘bribery’, ‘extortion’ and ‘treason’, the best the Democrats could come up with were ‘abuse of power’ and ‘obstruction of congress’ – making for the weakest case for impeachment in history. Unlike in the three prior impeachment cases (Andrew Johnson, Richard Nixon and Bill Clinton), there were no charges that Trump committed a crime.

Trump’s reference to Biden during the Ukraine call was wrong, and ‘abuse of power’ is a fair description of what he did. But many presidents, including Obama, have used their office to solicit help from foreign governments with the aim of supporting their own re-election. (Recall Obama’s ‘hot mic’ remark to then Russian president Dmitri Medvedev in March 2012, asking him to relay a message to Vladimir Putin to give him ‘space’ and hold off discussions of missile defence until after the November election, when he would have more ‘flexibility’.) Moreover, earlier presidents have misused their positions in ways far worse than Trump – think of FDR’s internment of the Japanese during the Second World War – and they were not impeached.

‘Abuse of power’ is more akin to what the constitution’s drafters referred to as ‘maladministration’, something they considered too subjective to be valid grounds for the serious action of impeachment. By downsizing the grounds for impeachment to a vague ‘abuse of power’ standard, the Democrats have created a precedent for using impeachment as a bog-standard political weapon in the future, instead of the rare rebuke the US founders intended it to be.

In the past, and especially after the failure to evict Johnson in 1868, it was understood by US politicians of all stripes that a flippant and partisan use of impeachment ultimately threatened the stability of the country. The Democrats’ deployment of impeachment today against Trump, on such un-weighty charges, shows that at least one wing of the US political establishment has lost its sense of self-restraint.

Initially, it appeared that Pelosi understood the broader risks in pursuing impeachment. In March, she said, ‘Impeachment is so divisive to the country that unless there’s something so compelling and overwhelming and bipartisan, I don’t think we should go down that path’. By Pelosi’s own criteria, she and the Democrats have failed.

Yes, Democrats were able to win the impeachment vote in the House on a party line, and with the backing of their anti-Trump party members. But they were unable to gain support beyond that. The move to impeach was far from ‘bipartisan’, as not one Republican in the House voted for impeachment. The lack of any Republican converts to impeachment, rather than being evidence of a cultish subservience to Trump, reflects how the Democrats failed to make a ‘compelling’ and ‘overwhelming’ case to the country at large. Indeed, polls indicated that support for impeaching and removing Trump declined as the Democrats held hearings over the past two months. And just before the House vote, more Americans were opposed to impeachment than in favour, according to the Real Clear Politics average of polls.

Most of all, Democrats failed to convince a majority of people that their case against Trump transcended petty partisanship. Trump’s impeachment yesterday should have been a momentous occasion. After all, it was only the third time in American history that the House voted to impeach a president. And yet, the most striking aspect of Trump’s impeachment has been how small and mundane it all feels, almost a non-event.

Indeed, hardly anyone tuned in to the Democrat-led hearings, which were devoid of new, substantial evidence and dry as dust. In recent weeks, news media frequently relegated impeachment to a secondary story. Only a small minority of Americans have been paying close attention. Even Democrats don’t seem to have their hearts in it. Trump’s impeachment is meant to be an historic and hugely important political event, and yet the Democratic Party contenders for president never mention it, acting as if impeachment was occurring in an alternate universe. Democrats in congress, with their rush to an impeachment vote, give the impression of just wanting to get it over with as soon as possible.

The Democrats’ pursuit of Trump is not wrong simply because they downsized impeachment and turned what should be a momentous event into a snoozefest. Trump’s impeachment, on the basis of the half-baked grounds Democrats have presented, is fundamentally flawed because it represents an attempt to overturn the result of a democratic election. The self-styled Resistance is blind to the irony of seeking Trump’s removal from the presidency for ginned-up, insubstantial reasons. What they are doing is more anti-democratic than anything Trump has tried.

Which brings us back to the parallels with Brexit. Many have claimed that Brexit and Britain’s recent election result show the risks of the Democrats nominating a candidate that is ‘too left-wing’, like Corbyn. In fact, if there is a lesson from Brexit for the US, it has more to do with the dangers of the establishment using extraordinary means and entrenched levers of power to thwart the will of the voters, who they believe got it wrong. This invites a backlash from voters when they get the next opportunity to do so.

As much as the Democrats might seek to ‘move on’ from impeachment in 2020, Trump’s re-election campaign is unlikely to let them. The script writes itself. Indeed, it’s not hard to see impeachment backfiring on the Democrats. They could have used the past three years exposing Trump as the false populist he is, and presenting an alternative that wins back working-class voters the party has lost over the years. Instead, the Democrats’ manic and obsessive pursuit of impeachment can now be used by Trump as proof that he continues to be the nemesis of the unpopular political elite (and so must be doing something right).

And if Trump manages to win re-election next year, how will the Democrats respond? Well, as Democratic congressman Al Green says, a ‘president can be impeached more than once’. God, what a prospect. They might as well say they have to destroy democracy in order to save it.