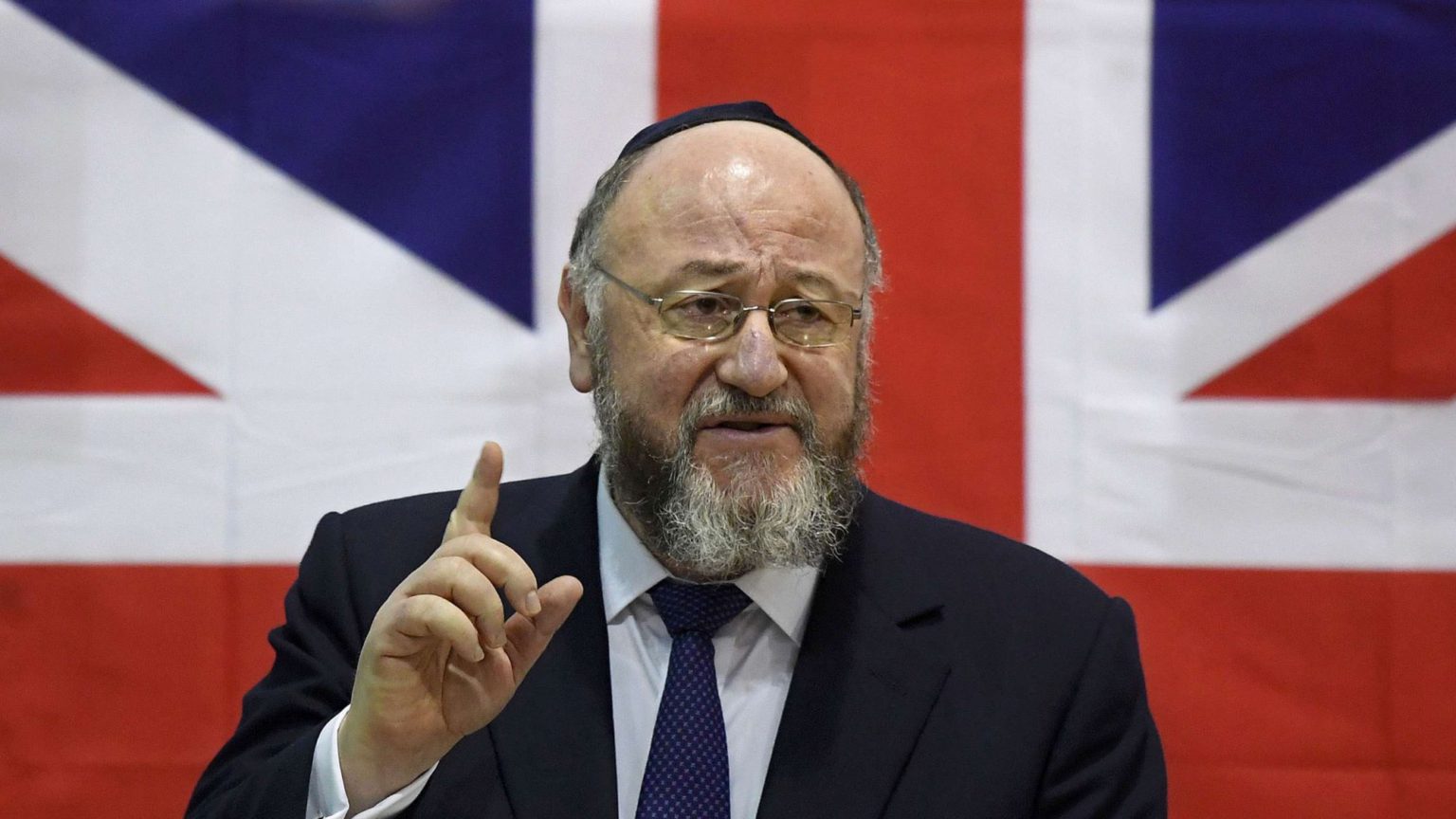 The ink had barely dried on the article penned by UK chief rabbi Ephraim Mirvis – issuing an unprecedented, damning indictment of the Labour Party over its handling of anti-Semitism – before Corbynistas set about proving him right.

In this remarkable intervention, published in The Times today, Mirvis said Labour leader Jeremy Corbyn was ‘unfit for high office’ due to his past associations with anti-Semites and his party’s inability to get a handle on cases of Jew-hatred among its membership.

The piece offers a grim reminder of the growing charge sheet against Corbyn’s Labour. Mirvis references the reported 130 outstanding cases cases of anti-Semitism being investigated by the party, as well as the Jewish MPs who have effectively been driven out by vile racist abuse.

Speaking today, at the launch of Labour’s ‘race and faith manifesto’ no less, Corbyn said ‘anti-Semitism in any form is vile and wrong’. He said ‘there is no place for it’ in Labour, reminding the audience that his is the party that ‘passed [the] Human Rights Act, that set up the Equality and Human Rights Commission’.

It was an unfortunate reference. The Equality and Human Rights Commission is currently investigating Labour over anti-Semitism. (The only other party to be investigated by the EHRC was the fascist BNP.) And that wasn’t the only problem with Corbyn’s defence.

As Mirvis reminds us in his piece, this isn’t just a case of poor party processes: Corbyn himself is a big part of the problem. He has associated with groups, like Hamas and Hezbollah, who have ‘endorse[d] the murder of Jews’. ‘How complicit in prejudice would a leader of Her Majesty’s opposition have to be to be considered unfit for office?’, he asks.

The piece is damning, but also full of regret. Rarely does a faith leader enter the political fray so explicitly. Worse still, Mirvis seems to know full well that his concerns, shared widely across Britain’s Jewish community, will fall on deaf ears among those who need to hear them most.

‘We have learned the hard way that speaking out means that we will be demonised by faceless social-media trolls and accused of being partisan or acting in bad faith by those who still think of this as an orchestrated political smear’, he writes.

As it turns out, he was only half-right: Corbynistas have dismissed him, but many haven’t bothered hiding behind an avatar. In a since-deleted tweet, Labour activist Holly Rigby dismissed Mirvis as a ‘Boris Johnson supporter’ and ‘uncritical supporter of Netanyahu’. ‘His comments must be taken in this context’, she said.

The proof for this seems to be that Mirvis congratulated Johnson when he became PM in July, and that he has met Netanyahu, as you’d imagine he would have. (Incidentally, in 2015, the Israeli PM rebuffed Mirvis’s concerns about settlements.)

Regardless, Mirvis’s article is all obviously part of the big anti-Corbyn stitch-up. ‘The establishment media have made it clear that racism is only considered grounds for exclusion from public life if it’s from someone associated with the Labour Party’, tweeted Novara Media’s Ash Sarkar.

These are the more polite examples. Corbynista Twitter has been a sewer all day, as it often is. Owen Jones even felt moved at one point to tell his followers that attacking Mirvis was ‘not the correct response’, even though it was a ‘baseless and disgraceful smear’ to call the leadership anti-Semitic.

Naturally, ‘Tory Islamophobia’ has come up – which Corbynistas blurt out, Tourette’s-like, whenever Labour anti-Semitism is raised. Forget Jeremy Corbyn: Boris ‘letterboxes’ Johnson is the real racist, has been the predictable refrain. But this cheap deflection does their argument no favours.

The two men’s alleged crimes are incomparable. Johnson once wrote a column mocking misogynistic religious dress while defending women’s right to wear it. Corbyn once invited Raed Salah – a man convicted in Israel for repeating the blood libel – to tea in the House of Commons. Spot the difference.

Such whataboutery is bad enough. What’s worse is the way in which truly spurious allegations of racism are now used by Labourites against concerned Jewish people. When Jews dare to speak up about Labour anti-Semitism, genuinely ‘baseless and disgraceful smears’ are flung their way.

Last week, Countdown star Rachel Riley caught flak from Corbynistas for putting out a photoshopped image of Corbyn, replacing the words on an anti-Apartheid placard with the words ‘Jeremy Corbyn is a racist endeavour’. For this, she was accused of being a racist, because she was ‘erasing’ the anti-Apartheid struggle.

Whatever you think about Riley’s tactics, she was clearly making a point about what she sees as the hypocrisy of Corbyn: that this ‘lifelong anti-racist’ has a seemingly different attitude when it comes to Jews. It should be obvious to anyone. But in response to the photo, Corbynistas demanded she be sacked.

A few days ago, actress Maureen Lipman was hit with a similar backlash, when she made a video attacking Labour over anti-Semitism. The mere fact that she decided to talk about the video with the Sun was used to tar her as a bigot. ‘You want to call out racism in the Sun? Seriously?’, said the Canary, a pro-Corbyn website.

Then there’s Ian Austin. He is the adopted son of Holocaust survivors and he left Labour over anti-Semitism in February. Earlier this month, he urged voters to back Boris Johnson rather than risk putting Corbyn in No10. In response, shadow chancellor John McDonnell (wrongly) accused him of being employed by the Tories, and Owen Jones accused him of being a xenophobe.

It’s disgusting. Imagine Labourites acting like this towards any other minority group. They are PC to a fault in almost every other respect. This is a party whose equalities spokesperson denounced Jamie Oliver’s ‘jerk rice’ as cultural appropriation. And yet so many Labourites are completely dismissive of – almost irritated by – British Jews’ completely legitimate fears.

Over the years, a new anti-Semitism has developed almost unconsciously on a certain part of the left, spawned from an increasingly debased ideology. As argued before on spiked, the combination of some left-wingers’ myopic obsession with Israel, their conspiratorial view of the world, and their ‘my enemy’s enemy is my friend’ approach to foreign affairs has unwittingly led them up some truly dark alleys.

This is why they have developed a blindspot where anti-Semitism is concerned, and an alarming tolerance for anti-Semites. The line between criticism of Israel and criticism of Jews has become blurred. And these leftists’ conspiratorial mindset means they increasingly see people’s sincerely expressed concerns as some partisan, coordinated attack.

But at what point does a blindspot become something worse? At what point do double standards over anti-Semitism become singling Jews out and treating them differently? At what point does defensiveness at certain allegations morph into genuine animus towards the group making them? Today, it feels like we found out.