The silencing of the people

This parliament feels increasingly illegitimate. It must go. 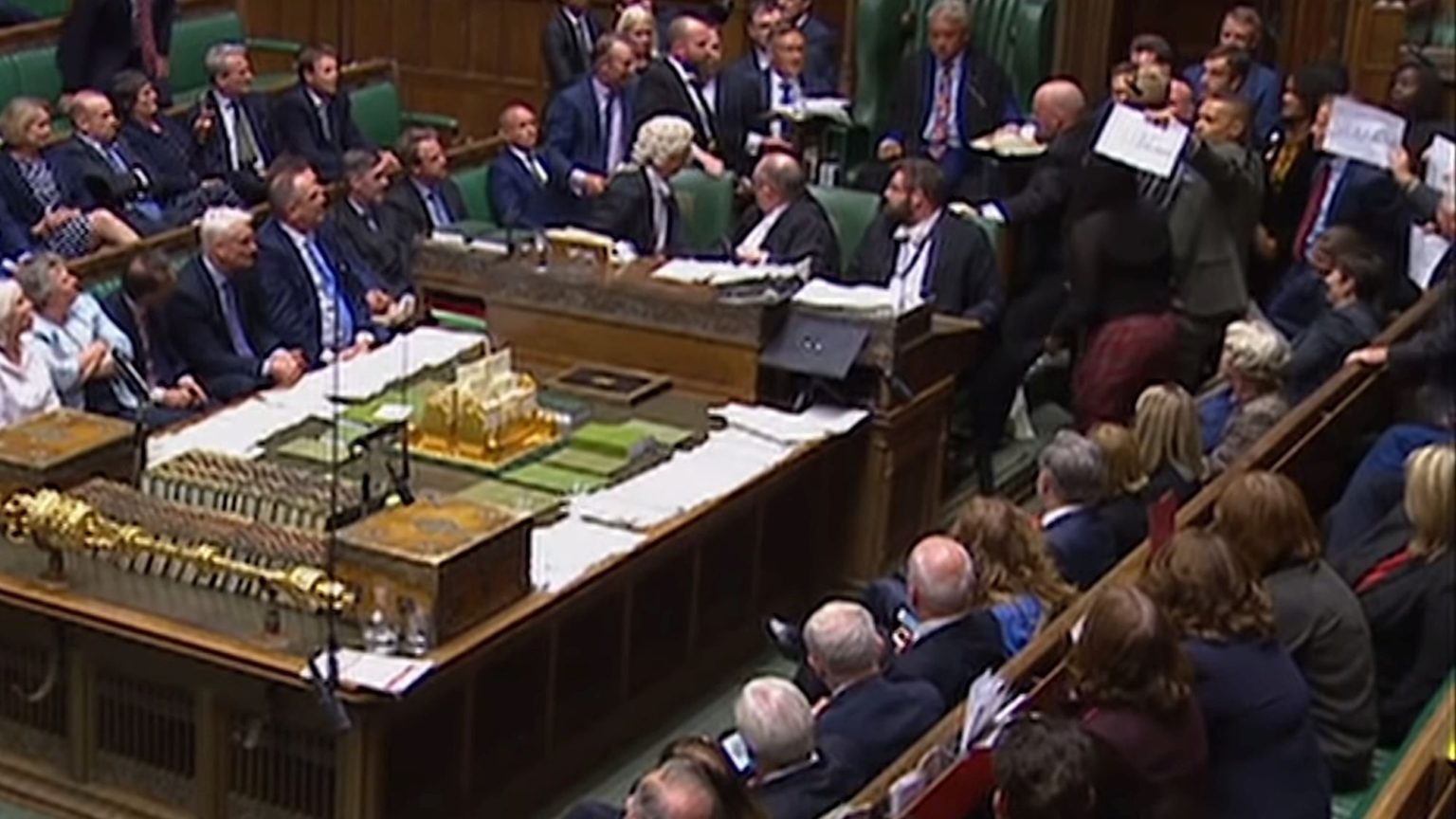 Last night, the House of Commons put on one of the most nauseating displays in its history. From the self-congratulation of the obsessively anti-Brexit, anti-democratic Speaker John Bercow to the last-minute pushing through of an archaic Humble Address motion to force government advisers to hand over their private WhatsApp messages, this was parliament at its worst. At its most aloof, its most decadent, and its most illiberal.

But perhaps the most grotesque sight of all, the sight that confirmed that this parliament is truly and irreparably exhausted, was Remainer MPs holding up signs declaring that they have been ‘silenced’ by Boris Johnson’s prorogation. This takes gall and arrogance to dizzying new heights.

Parliament is prorogued as of last night. It will not sit until 14 October. Whatever one thinks of this prorogation – spiked sees it as a cynical and unnecessary step – for Remainer MPs to complain about it is just too much to stomach. As prorogation began, with the arrival of Black Rod late in the evening, Remainer MPs booed, chanted ‘shame’, tried to prevent Bercow – the hero of their anti-Brexit, anti-democratic efforts – from leaving his chair, and held up signs saying ‘SILENCED’.

And what did they do for these hours and hours and days and days? They gabbed and blathered. They delayed and blocked and stalled Brexit. They made excuse after excuse for their failure to deliver Brexit. They preened and posed and made pseudo-fiery speeches about the evils of Brexit that impressed the Twitterati but literally no one else in the country. They filled the Commons with excuses and noise and bluster, all designed to distract attention from their staggering failure to respect the will of the people.

For these people now to present themselves as ‘silenced’, as being gagged on the Brexit issue, is mad. Indeed, their claim that ‘Brexit chaos’ is destroying parliament is utterly unconvincing. If Brexit has become chaotic, it is because of them. It is because of MPs’ backtracking on their own manifesto promise to respect the result of the EU referendum and because of their post-manifesto, post-democratic determination to destroy Brexit instead. We shouldn’t let them get away with blaming Brexit for the alleged chaos enveloping the political realm, because in truth it is their cynicism and lies and continual blocking of Brexit that has withered democracy in this country and reduced politics to a joke.

Even worse, they now prevent us, the public, from having a say on their behaviour and, in particular, on their legal block against a No Deal Brexit and their determination to secure yet another extension to the Article 50 process. Last night, MPs voted for a second time against holding a General Election. They do not want an election until they have effectively banned No Deal and kept us in the EU until at least January next year. They are going against the express will of the people and, at the same time, insulating themselves from the people’s judgement. They are usurping our democratic wishes while preventing us from having any say about this whatsoever. It is an outrage against democracy. They are silencing the masses.

This parliament doesn’t only feel morally and politically exhausted – it feels increasingly illegitimate. It feels like the least representative parliament in living memory. This is a parliament in which the vast majority of members were elected on manifestos that promised to deliver Brexit and yet it has spent much of the past three years trying to thwart Brexit. This is a parliament in which numerous MPs are now representatives of different parties to the ones they were elected for in 2017. This is a parliament that voted in favour of the EU referendum, voted in favour of triggering Article 50, and which continually said the people’s voice must be respected, and yet it now flat-out refuses to make Brexit a reality and in fact has essentially outlawed it via the Benn Bill.

They have to go. They have no idea how much contempt the public feels for them. Or perhaps they do, which would explain why they are so desperate to put off a General Election until they have completed their latest anti-Brexit, anti-democratic machinations. The public is biting at the bit to pass judgement – stinging, unforgiving judgement – on these political unrepresentatives. Parliament derives its authority entirely from the people, and yet right now it stands in opposition to the people. The people will not forget this when, finally, these charlatans and elitists allow us to exercise our democratic right to vote.