From Peterloo to Brexit

The political class still feels nothing but seething contempt for ordinary people’s opinions. 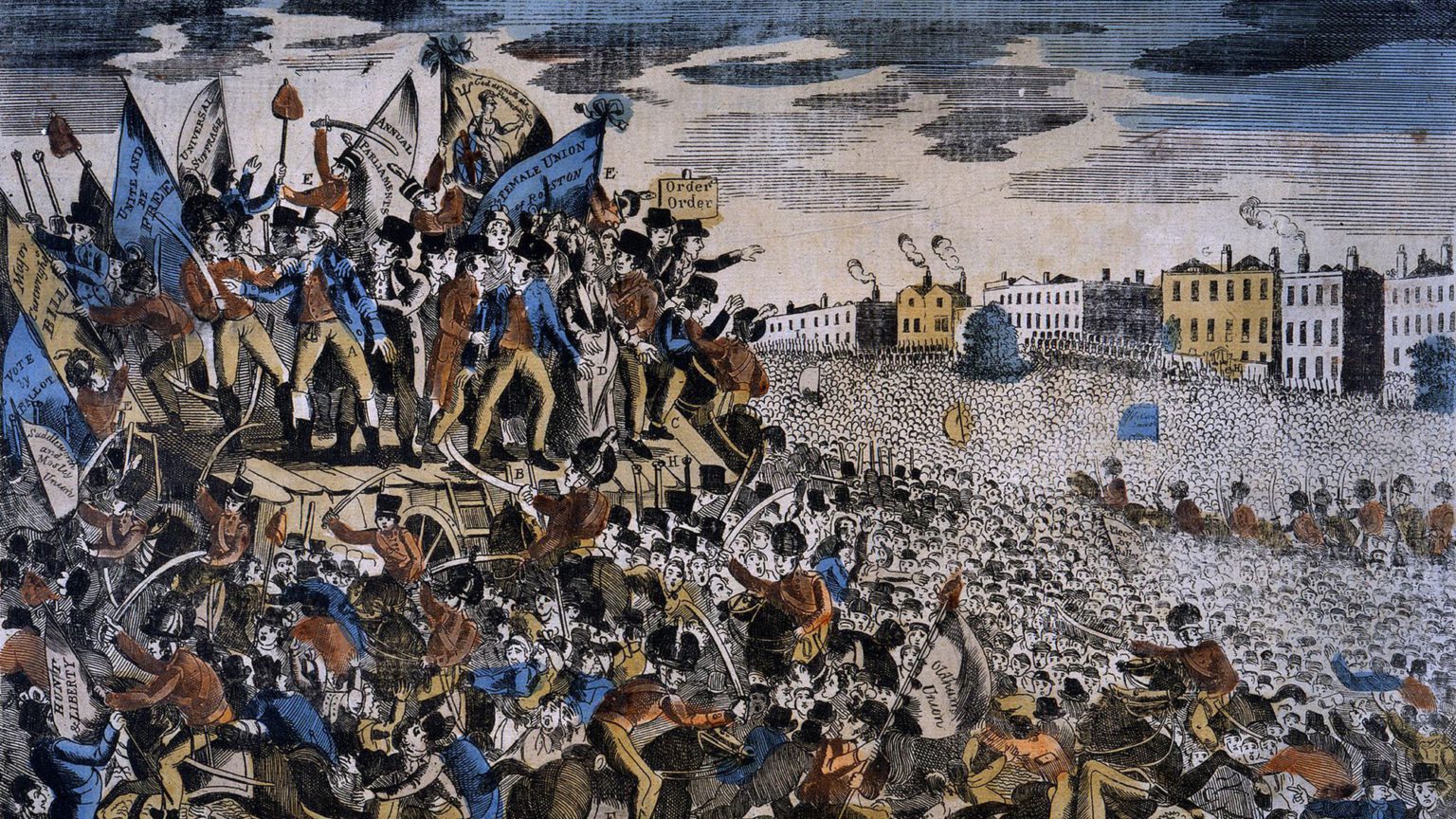 Today is the 200th anniversary of the Peterloo Massacre, when working people in Manchester were attacked and murdered by cavalry forces for daring to demand the right to vote. And what is our political class doing on this anniversary of such an important event in British political history? They are plotting, tirelessly, to overthrow something that millions of working-class people, and others, voted for: Brexit. They are doing what the Peterloo butchers did, only by political means and court cases rather than with bayonets and sabres. Our current political rulers may not physically attack the masses for having the temerity to use their democratic voices – not yet, anyway – but they view us with the exact same seething, elitist contempt as those who did attack the masses in St Peter’s Field on 16 August 1819.

Around 60,000 men, women and children gathered in St Peter’s Field in Manchester 200 years ago to demand parliamentary representation. They wanted that most basic and essential democratic right: the right to vote. The teeming industrial city of Manchester had no elected MPs in parliament. The old ‘rotten boroughs’ system meant that often sparsely populated rural areas sent MPs to the Commons, involving much patronage and sometimes even the buying of votes by wealthy aspiring politicians, while newly industrialised cities full of the growing urban working classes had little to no political representation. Against a background of post-Napoleonic Wars economic depression and a fast-spreading radical desire for meaningful democratic change, the tens of thousands of marchers arrived in St Peter’s Field with a clear demand: let us vote, let us speak.

What happened next is well known. They were attacked by cavalry forces. Troops on horseback wielded sabres against the democratic crowd. They slashed and stabbed, killing 18 people. Around 500 were injured. The slaughter was given the name ‘Peterloo’ as an ironic comparison to the Battle of Waterloo that took place four years earlier, in 1815. The bourgeoisie’s assault on the working-class democrats of Manchester had a deep impact on the radical psyche. New movements emerged in subsequent years, including the Chartists, the working-class movement for democratic representation. But it would be decades before the right to vote had been established across society. In 1867 some working-class men got the right to vote. In 1918, all men and some women got the right to vote. In 1928, finally all women got the vote. The General Election of 1929, 110 years after the march to St Peter’s Field, was the first election in which all adults had the right to vote.

The 200th anniversary of this bloody assault on working-class democrats ought to be a major occasion. It should be a reminder of the incredible, heroic sacrifices earlier generations made to secure people’s right to express themselves, to vote, and to see their votes be enacted. And yet while some in the political and media class will today pay lip service to the heroes of St Peter’s Field and express regret about the massacre of 18 of them, most of the elites will be too busy to do anything of the kind. Busy doing what? Trying to override and crush the votes of 17.4million people, which includes millions of working-class people and eight million women. It is a genuinely alarming and revealing moment: the 200th anniversary of the Peterloo Massacre arrives and the political set is engaged in an effective coup against the people; in a war against ‘No Deal Brexit’ (which really just means a war against Brexit); in a concerted effort to force the ignorant public, as they see us, to vote for a second time and to give the ‘right’ answer on this occasion.

Most tellingly of all, it is the supposedly leftish, progressive sections of the political set – those who in their youths may well have read some EP Thompson and other accounts of Peterloo and the struggle for democratic liberty – who are most committed to the cause of destroying the 17.4million-strong vote for Brexit. The Greens, the Lib Dems, and of course the Corbyn movement. Jeremy Corbyn devoted a large part of his political life to Euroscepticism. He argued, influenced by Tony Benn and other Labour left figures, that the EU was an illiberal, undemocratic, anti-working-class institution. Yet now he offers himself up as a potential caretaker prime minister who can stop Boris, stop ‘Hard Brexit’, and enact a second referendum – that is, tell the people that they were ignorant first time round, that they had been corrupted by demagogues, and therefore they must graciously be granted a second chance by the more unenlightened elite.

Precisely these elitist and contemptuous arguments were used against the heroes of St Peter’s Field and subsequent movements for democratic change. The working-class democrats of the Chartists were told that working people, lacking education and basic knowledge of political affairs, did not have ‘ripened wisdom’ and thus were ‘more exposed than any other class to the vicious ends of faction’ – that is, to demagogic games and the wicked words of strongman politicians. This same ugly view still holds across the political class. They see the vote for Brexit as the handiwork of demagogues who invaded the putty-like minds of plebs and idiots. A ‘Billionaire’s Brexit’, as chief anti-democrat Caroline Lucas puts it. Corbynistas view themselves as the heirs to the martyrs of Peterloo; in truth they are the heirs to the butchers of Peterloo. The efforts of this upper middle-class movement of woke elitists and bourgeois identitarians to trash the votes of the teeming masses utterly explodes their view of themselves as radicals and confirms they have more in common with the cavalry than the marchers of August 1819.

That the 200th anniversary of Peterloo coincides with the largest assault on British democracy in living memory – the assault on Brexit – points to the unfinished business of the struggle for democracy. Still, 200 years after the massacre in Manchester, ordinary people are not taken seriously. Still their democratic voice is casually sidelined or overridden. Unlike the marchers of 1819, people today have the right to vote; but like the marchers of 1819, they’re ignored, blanked, disenfranchised. For the right to vote becomes meaningless if our votes are not properly acted on, if they do not result in the political change that the masses – the largest political mass in UK history in the case of Brexit – demanded.

They’ve put away the sabres and other weapons, and for that I suppose we should be somewhat grateful. But our rulers still look upon us as a grotesque multitude with no right to impact on serious political matters, in the same way that those sword-wielding horsemen did 200 years ago.