Finally, a Democrat worth supporting

Tulsi Gabbard’s anti-war, pro-freedom message is the best thing to emerge in US politics in years. 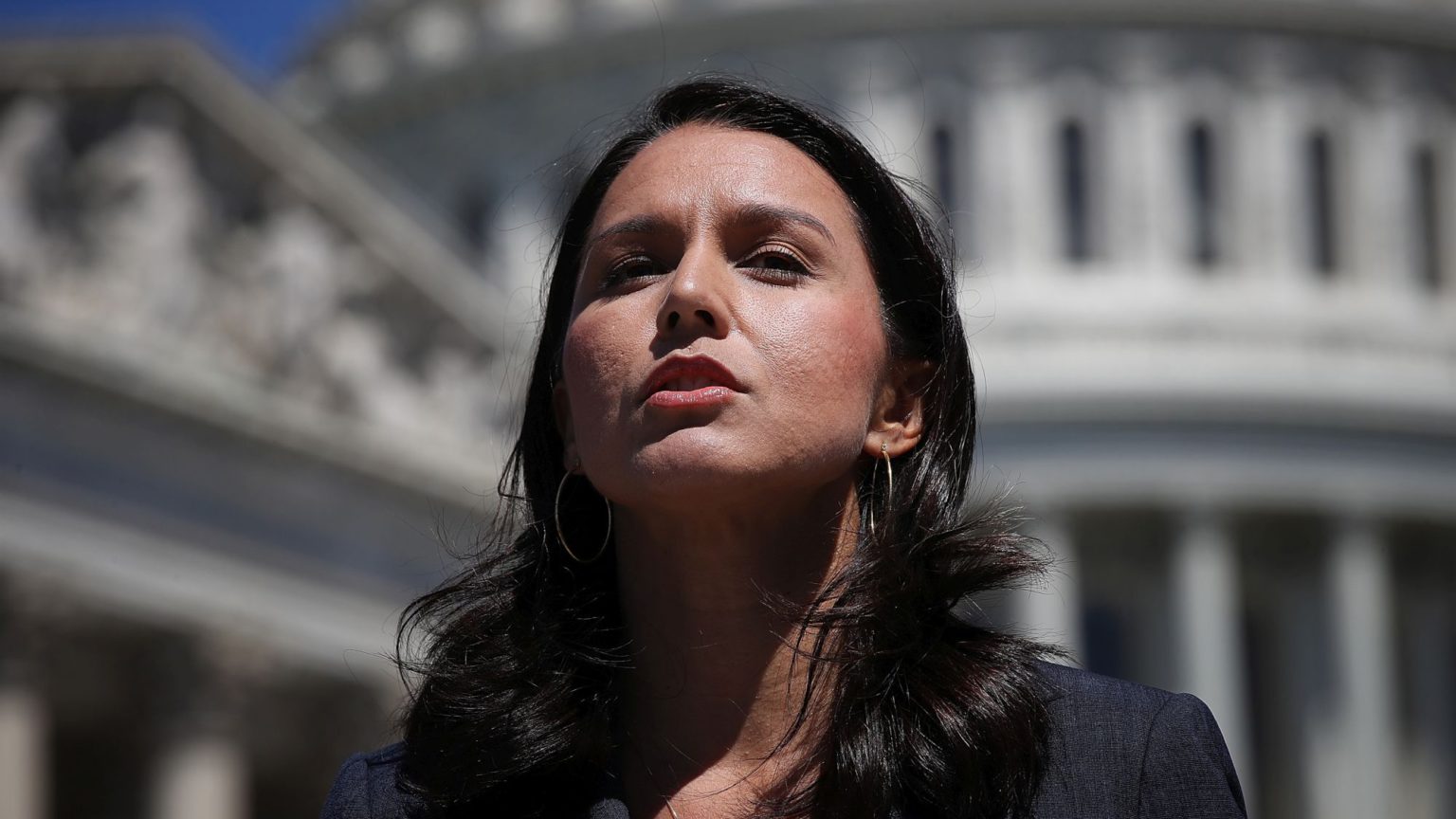 The liberal establishment is so scared of Tulsi Gabbard that they’ve convinced themselves she’s an unwitting stooge of Russia, being pushed by Putin’s evil online robots to destroy America from within.

Yes, in the febrile, conspiracist, Russian-bot-obsessed brains of the increasingly unhinged liberal elite, Ms Gabbard, the Democratic congresswoman for Hawaii and easily the most impressive 2020 presidential candidate, is the fave of those dastardly bots whose ultimate aim is to screw over the USA. Following this week’s Democratic candidates’ debate in Detroit, in which Gabbard made mincemeat of the California Democrat Kamala Harris on the issue of judicial authoritarianism, an actual New York Times writer said: ‘Beware the Russian bots and their promotion of Tulsi Gabbard and sowing racial discord, especially around Kamala Harris.’

This idea that Gabbard – the most principled critic of military interventionism to have emerged in the US mainstream in decades – is in the ascendant because Russian bots and other evil online forces are doing her bidding is becoming widespread among centrists. Newsweek columnist Seth Abramson says ‘there’s a concerted far-right effort (possibly involving foreign actors) to bolster Tulsi Gabbard’. He based this nuts claim on the fact that, during the Detroit debate, Ms Gabbard was the most-searched name online in every state in the US. Erm, isn’t it possible that viewers who weren’t entirely sure who Ms Gabbard is, but who were impressed by her articulate takedown of Harris and other candidates, took to the web to find out more? Surely that’s a more rational explanation than the idea that a Russian troll army and loads of fascists are on the web promoting Gabbard as chief wrecker of the United States.

It’s ceaseless. ‘Russia’s propaganda machine discovers 2020 Democratic candidate Tulsi Gabbard’, declares NBC News. What all this nonsense reveals is that Russophobic conspiracy theories play a really important role for dazed Hillary-era centrists. They are now the main means through which these people try to make sense of a political world that no longer conforms to their tastes or their ideology. So just as they used the Russian-bots rubbish to explain why Trump beat Hillary, now they use it to explain why a candidate who, horror of horrors, is opposed to US military intervention overseas is proving popular with viewers and voters. Given that Gabbard’s worldview runs so counter to theirs – on war, on free speech, even on identity politics – the only way they can explain her presence in politics is as a result of foreign, fascistic meddling. That tells us far more about their own political arrogance than it does about Gabbard’s Russian fanbase.

In a sense, they’re right to be scared of Gabbard. She feels like a genuinely fresh force in Democratic politics. A former soldier who served in Iraq, and now the Democratic member of the House of Representatives for the 2nd congressional district of Hawaii, she represents a challenge both to the old militaristic US establishment and to the newer, more woke wing of the establishment.

She is best known for her principled opposition to American militarism in Iraq, Afghanistan and Syria. ‘We were all lied to’, she said of the Iraq War in the Detroit debate. She described the spun stories about Saddam Hussein’s WMD and connections with al-Qaeda as a ‘betrayal of the American people’. Even more stingingly, she argues that far from defeating al-Qaeda in the post-9/11 period, the US has ended up backing al-Qaeda-derived forces, especially through its support for so-called ‘rebels’ in Syria who, as Gabbard rightly says, are in fact dangerous Islamist groups.

She gets a huge amount of flak for her anti-war stance. Establishment figures denounce her as an ‘Assad apologist’. She met with Bashar al-Assad during a fact-finding mission to Syria in 2017, and ever since she’s been called a friend of dictators by pro-militarist elements in the US. Kamala Harris, reeling from Gabbard’s attack on her authoritarian record as attorney general of California during this week’s debate, raised the Assad thing when the debate was over. And yet, as Gabbard has explained numerous times, she met Assad only because she wants to gather as much information as possible, from as many sources as possible, on how destructive the West’s ‘regime-change wars’ can be. Establishment stiffs simply fear the prospect of a president who would refuse to wage war overseas. ‘Tulsi Gabbard’s Syria record shows why she can’t be president’, sniffs the Washington Post.

If Gabbard horrifies the old warmongering elites, she worries, at least, the new woke elites. It is notable that unlike other young female political representatives, most notably the so-called ‘squad’, Gabbard is rarely cheered for her background. She was the first-ever Hindu and Samoan America to enter Congress. She’s the first Hindu to run for president. But you’ll be waiting a long time for the kind of people who never stop going on about the fact Ilhan Omar was one of the first two Muslim women to be elected to Congress to congratulate Gabbard on her identity achievements.

Not that Gabbard would want praise on that basis. Indeed, she’s a critic of both identity politics and political correctness, which is precisely why the woke are so iffy about her. She lists political correctness alongside overreaching government and Big Tech as one of the great threats to freedom of speech in 21st-century America. And she says of identity politics that it is ‘being used to kind of tear people apart’ when we should be ‘remembering and recognising what unites us’.

Her commitment to challenging PC and its strangling of open debate extends to criticising then president Barack Obama for his refusal to use the phrase ‘radical Islamic terrorism’. We should never cower from using the word Islamic in relation to Islamic terrorism because ‘it is important that you identify your enemy, you know who they are, you call them by their name, and you understand the ideology that’s driving them’, she said. Such moral clarity is rare in a time when politicians lamely insist that Islamist terrorism ‘has nothing to do with Islam’, as if such clipped, self-censoring utterances are ever going to solve anything.

Gabbard also dislikes Big Tech’s enforcement of PC speech codes online. Social-media giants have become a ‘threat to our freedom of speech’, she says. Their drowning-out, or outright banning, of both radical right and radical left voices is a threat to open debate, she says, and even ‘controversial’ and ‘distasteful’ views should enjoy freedom of expression.

Her anti-authoritarianism was on full display in her showdown with Kamala Harris this week. She dragged Harris for her record as Californian attorney general from 2011 to 2017. During that time, thousands of people were incarcerated for marijuana possession (and yet Harris effectively admitted that she herself has smoked dope), numerous people were kept in prison for unnecessarily long periods of time, and Harris withheld evidence that would have freed someone from death row. Gabbard’s confrontation with Harris won her many new fans and also helped to puncture the shallow identitarian cheering of Harris that has been happening on Twitter and elsewhere for the past few weeks.

Gabbard is a candidate worth supporting. She wants the US to reject identitarian division and ‘reclaim patriotism’, she wants an end to American wars, she likes freedom of speech, and she’s not afraid to call Islamist terrorism by its name. If I was American, I’d vote for her.