The war on America’s past continues

Statues of pioneers could be the next target of the monument destroyers. 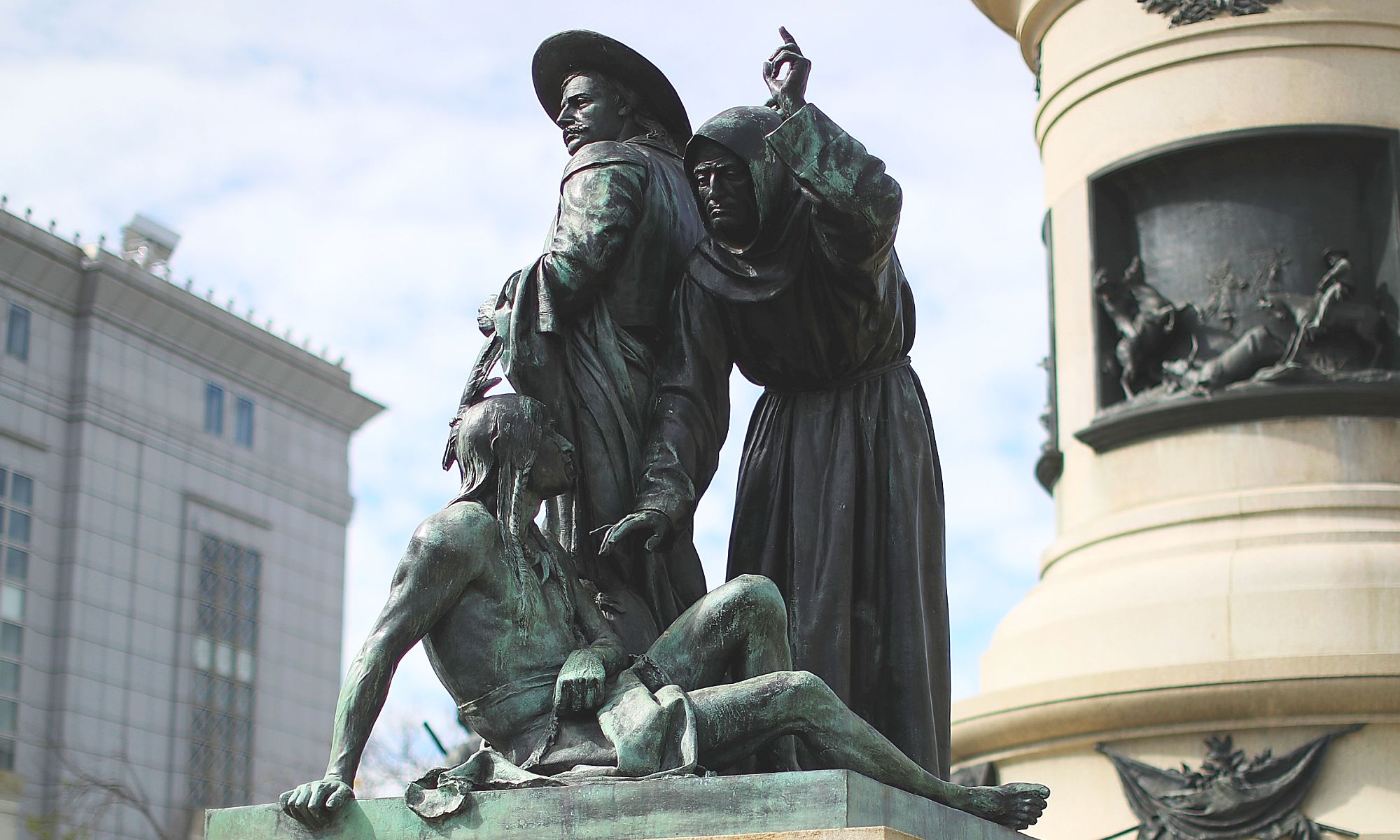 In the wake of recent attempts – some successful – to have Confederate statues removed from the US south, what is the future of colonialist statues in the US west? In Pioneer Mother Monuments: Constructing Cultural Memory, Cynthia Culver Prescott, a professor of history at the University of North Dakota, senses a reluctance to apply to pioneer monuments the ideological zeal that was turned on Confederate memorials. ‘We resist applying the insights of settler colonial studies to American pioneer narratives because to do so would call into question foundational myths of Jeffersonian agrarianism and American exceptionalism, and lay bare white conquest of native lands and peoples.’ She outlines the cases against statues of colonialists, and particularly against female settlers, who took part in the drive to colonise the American west in the 19th century.

Statues depicting women have been criticised by academics and campaigners for being idealising, inaccurate, generalising and stereotypical. There is a sense that campaigners direct such ire at statues of women settlers not just because they embody sexism and colonialism but because they show women as complicit in the act of dispossessing native peoples. There is a residual resentment that – in intersectional terms – a political minority took part in a project to oppress another minority.

The creation of monuments honouring white settlers of the west began in earnest in the 1890s. As the American western frontier was closed and territories became part of the United States, a chapter of national history had been definitively closed, too. Just under 190 monuments have been erected in the US since the 1880s marking pioneer achievements. It was a way of fixing in collective memory the achievements of forebears just at the moment their stories were becoming history. The western territories had been spared the scourge of the Civil War, and its new states had a history that involved war with Mexico, the persecution and flight of the Mormons and the Indian Wars.

In the statuary, common types emerged. Women were the prairie Madonna, the protective mother, the Indian guide leading the way, the nuclear family. Men were resolute fathers, the epitome of bravery and stoic defiance. Competitions, touring exhibitions, newspaper features and book publications circulated them, encouraging other communities to commission similar statues. Alexander Phimister Proctor’s statue of a male pioneer was an acceptable manifestation of the conquering of the west. Bearded and dressed in buckskin clothing, the pioneer wears European boots and carries a rifle. He straddles the wisdom of the natives and the technological superiority of settlers, explaining how the west was won through a combination of old knowledge and new materials.

Culver Prescott notes the example of James Earle Fraser’s sculpture The End of the Trail (1890s), which depicted an exhausted American Indian on a tired pony. Fraser had apparently developed a deep sympathy for native peoples after witnessing an army eviction. It seems the sculptor intended to elicit sympathy for evicted Indians, yet it was interpreted by contemporary observers as a scene of the sad but necessary extinction of a primitive indigenous people, conforming to the social Darwinist reading of history, in which advanced people defeat and displace inferior peoples. This is an object lesson in the variety of interpretations an artwork can elicit, regardless of artistic intent. It should alert today’s social-justice warriors to the dangers of misinterpreting public art and the risk of suppressing art on the basis of misapprehension.

There was a heyday of monument building in the 1920s and 1930s at a time when the first-generation pioneers were a diminishing minority of the population of western states. Culver Prescott notes that this boom in pioneer mother monuments coincided with the rise of the New Woman and the Flapper, presentations of femininity circulated in the mass media that undermined social assumptions. In the 1940s, the boom in pioneer statues came to an end. The beaux-arts style (idealised realism) fell out of fashion and Modernist art – such as Abstract Expressionism, Minimalism and other styles – became more common and accepted.

In recent years, boards of trade and museums have sited new monuments in western towns as part of efforts to attract tourists. Monuments – many of little aesthetic worth or integrity – are sometimes part of a marketing plan to establish towns as sites of attraction for those wishing to trace the pioneer trails. In Oklahoma, towns developed large and elaborate statues in extensive statue groups as they competed for commerce and heritage tourism, and sought to distinguish themselves from other suburban commuter developments. Pioneer Mother Monuments examines the example of Schaumburg, Illinois as a case history.

In the early decades of the 20th century, many women’s associations in the American west adopted projects to celebrate pioneer mothers as civilisers of native people and uncultivated male settlers. Interestingly, this movement is an example of first-wave feminism, which is now at odds with radical third-wave feminism, which is hostile towards what its adherents consider gender-stereotypical roles. What could be more conventional for a woman than motherhood? For many feminists, the depiction of women as mothers is problematic. Depictions of women feeding, protecting and instructing children are considered demeaning. Such activities, even when undertaken willingly or happily, are viewed by some feminists as a limitation, a reduction of women to near domestic servitude. Anything that reinforces gender roles is objectionable – even if the specifically celebrated qualities (stoicism, compassion, loyalty) are admirable ones.

Opposition to these settler symbols has more than a touch of misanthropy about it. Pioneer women faced great hardship and carried terrible responsibilities caring for relatives in dangerous circumstances. The recognition of such privations in public monuments should have been a testament to the importance and fortitude of female pioneers, which would have been welcomed by campaigners for gender equality. The problem is that today, ‘pioneer’ is a term redolent of white colonialism. In intersectional terms, women are oppressed, but settlers are oppressors; ethnic whiteness tips the balance and so the depicted individuals fall into the territory of the privileged hegemonic.

Pioneer Mother Monuments includes many illustrations that convey well the character of the sculptures under discussion. Maps show the distribution of sculptures and an appendix lists the 187 monuments, with data. Yet readers will also encounter terms and concepts that are derived from gender and race studies, yet are not explained as such. ‘Inclusion’ and ‘diversity’ are words that denote not actual inclusion and diversity, but anti-majority action under the auspices of countering the hegemonic colonial American narrative.

The subject of public statuary in the American west is a fascinating and fruitful area for study. If writers can set aside their ideological framework (as much as possible), and instead present us with the facts, sensitive analysis and various viewpoints, then informed and independent readers can draw their own conclusions. Pioneer Mother Monuments displays Culver Prescott’s considerable dedication, diligence and seriousness, but it will not be suitable for many readers. Some readers will find the political assumptions behind the writing too insistent and prominent.

Will monuments of pioneer mothers be the next target of monument destroyers? In the near future, individual pieces may be targeted and removed due, not to feminism, but to anti-colonialism, which has more general political and social traction among the US public. It is easier to persuade people that positive representations of settlers in some way whitewash historical fact of displacement and brutalisation of American Indians than it is for feminist academics to turn a statue of a woman in a sunbonnet into a political flashpoint. Culver Prescott admits that removing statues is ‘erasure’, but argues that the majority of pioneer statues should remain in place, not because of respect for cultural heritage, but because removing statues of women would lower the percentage of women represented in public art overall. She suggests the addition of new interpretative plaques would provide suitable space for wider views and defuse some calls for removal.

Culver Prescott shows that the main public divisions on the subject of pioneer statues are along political and regional lines rather than racial ones. Political liberals and city inhabitants (especially of university towns) tend to be sceptical of pioneer statues; rural inhabitants, Christians and conservatives tend not to find the statues offensive. Contrary to the Civil War memorials, indications are that the majority of people do not feel very strongly about pioneer monuments, which is a heartening indication of an underlying patience and tolerance in the US.

As university graduates steeped in identity politics become more prominent, activists will find more influential allies ready to accede to demands to remove statues. Statues of Columbus and other explorers have already been removed; eventually, ideologues will come for pioneer monuments, too. Despite polling evidence showing local populations support the retention of Civil War memorials, statues were removed by campaigners, politicians and civil administrators. This tyranny of the passionate minority over the moderate majority proves John Stuart Mill’s chilling maxim: ‘One person with a belief is equal to a force of 99 who have only interests.’