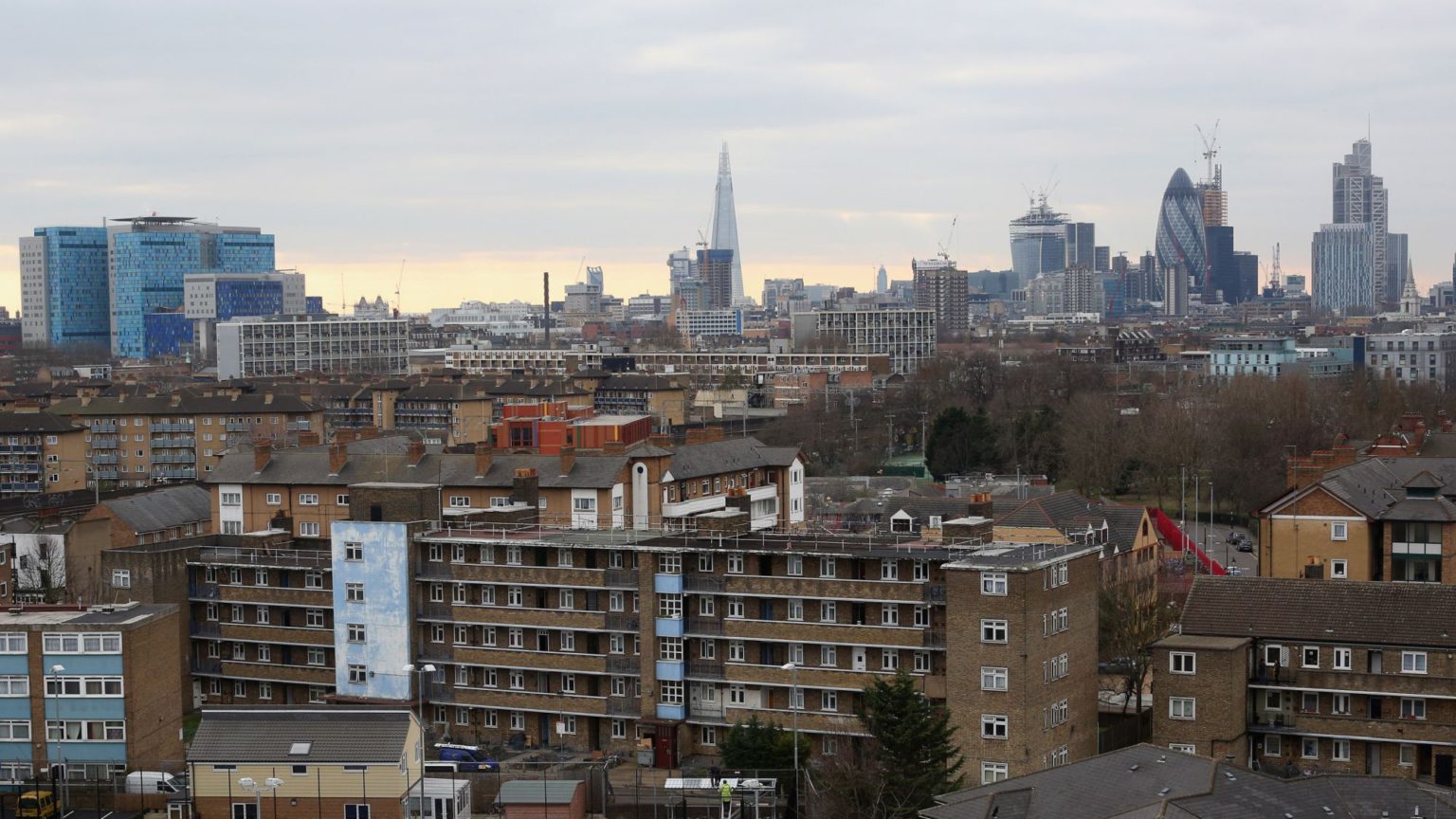 A city without citizens

John Cleese has a point about London.

I know someone, now in the twilight of her life, who has lived on the same London street for the past 45 years. Many of her local friends have died or moved away. Where the street once buzzed with English, spoken in a variety of accents, now you can go through an entire day without hearing English. From her small terraced house, she hears Pashto over one garden fence, Romanian over the other. In the nearby row of shops, the English-speaking Indian-owned mini-supermarkets have given way to Polish shops outside which young men gather every evening, speaking Polish. The cockney greengrocer and small butcher’s are distant memories – they disappeared three decades ago – and the most common shops now are African barbers and Eastern European markets with grand names like ‘International Food Emporium’. The people inside rarely speak English.

This person says she often feels lonely and isolated, like a foreigner on her own street. Does that make her racist? In the eyes of the chattering-class defenders of the cult of diversity who raged against John Cleese last week, it probably does. Cleese caused a storm when he took to Twitter to reiterate his belief that London is ‘not really an English city anymore’. ‘I note also that London was the UK city that voted most strongly to remain in the EU’, he tacked on for good measure, really driving the Twitterati into moral meltdown. Let’s leave to one side that Cleese is not the best judge of life in London, given he spent his early years in a posh public school in the south west of England and now spends much of his time in the Caribbean. Regardless, he has a point. And his detractors know he does.

It probably won’t make much difference to those who holler ‘RACIST!’ at anyone who criticises the ideology of multiculturalism if I tell them the person I know is not nostalgic for a time when her street was all-white. Because that time never existed, certainly not in the 45 years she has lived there. The time she feels nostalgic for is one in which her nextdoor neighbours, and best friends, were a black family. And where her other neighbours were a Jewish couple (the first Jews she ever met). And where you couldn’t buy anything locally without having a conversation with an expressively English-speaking Indian shop-owner. Life was diverse then, but diversity wasn’t the purpose of life. The accidental fact of diversity was entirely subservient to the conscious yearning for common speech and common concerns. People spoke English, they spoke about similar things, they felt connected. There were many foreigners, or descendants of foreigners, but the street didn’t feel foreign.

That has changed. This street, like others in London, feels foreign now. The street is in Brent. Brent, in the jargon of the diversity industry, is ‘one of the most diverse boroughs in the UK’. What this means in real terms is that just a third of its inhabitants are White British. The population is predominantly Asian and mixed-race and recently there has also been a huge influx of Eastern European migrants.

Many will say, ‘So what? Non-white people can be Britons too.’ And they would be absolutely right. But the point about Brent, and the other London boroughs that are less than one-third white British, like Harrow, Ealing and Newham, is that this demographic phenomenon is not simply down to more migrants moving in, but also to large sections of the white British population moving out. To celebrate the so-called diversity of these boroughs is effectively to celebrate the creeping self-separation of London communities; to be relaxed about the fact that white Britons and people who are not white Britons increasingly live apart. You can call that diversity if you like; I call it segregation.

Demographically, London has changed enormously in recent years, but it has become tantamount to a speechcrime to say anything critical about these developments. Take the fact that a few years ago, London became the first great Western capital to become majority non-white. Just 45 per cent of London is white British. Is that an uncomplicated Good Thing? Where have the white people gone? Why did they leave? As the BBC reported in 2013, in the first few years of the new millennium, 620,000 white Britons left London – the equivalent of the entire population of Glasgow. Should that worry us?

Or consider the shift in English-speaking habits in London. The 2011 census found that one in 50 people in the UK cannot speak English well or at all. In Newham, Brent and Tower Hamlets, more than eight per cent of inhabitants do not have an ‘effective command of English’. Should we celebrate that as diversity, or see it as entirely debilitating to the individuals concerned that they cannot converse in the national language? Isn’t cheering the ‘diversity of languages’ deeply irresponsible given that it detracts attention from the fundamental alienation these non-English speakers must experience on a daily basis?

Both London’s white Britons and its newer arrivals lose out when discussion about demographic change is chilled and censored with accusations of ‘racism’. White Britons’ concerns, which are so profound that they are leaving in their hundreds of thousands, are ignored. And newer immigrants’ linguistic and cultural handicaps are cynically transformed into evidence of London’s ‘rich cultural tapestry’. The growing cultural and ethnic segregation of certain London boroughs, and of London itself, comes to be treated as a positive, a boon to the cult of diversity, rather than as a negative that grates against the very possibility of having a common sense of Londoness and, more importantly, of Britishness.

What is really bizarre about the attacks on Cleese is that his critics actually agree with him that London is no longer fundamentally an English city, only they express it in a different way. Consider London mayor Sadiq Khan. He said Cleese sounded like Basil Fawlty with his comments on London. ‘[D]iversity is our greatest strength’, said Khan, and London is proud to be a ‘global hub’. This is fundamentally what Cleese himself was saying: that London has become globalised, ‘diverse’, post-English.

Indeed, the ‘London is Open’ propaganda that Khan’s office produces is entirely based on celebrating the ‘globalisation’ of London, the fact that it is less the capital of the UK than a worldly crossing point for the flows of capital, labour and things. There has been a pretty transparent effort on the part of the London mayor, and of various New Labour technocrats before him, to use the issues of immigration and diversity to socially re-engineer London, away from being a city of people and of values and towards being a kind of advert for diversity. Away from being a national capital and towards being a symbol of the post-nationhood, post-borders, post-common values ideology that excites the new fluid elites but leaves most other people cold and, like that person I know, lonely and isolated.

The problem is that if you reduce London to a symbol, you reduce its inhabitants to symbols, too. What is the role of white Britons in this Brave New London? It is to nod along uncritically to the cult of diversity. Fail in that duty and you will be branded racist. What is the role of immigrant communities? It is to agree to have their differences constantly emphasised by cynical politicians keen to paint London as a super-diverse ‘global hub’. Which means the integration of these immigrants into the values of London and of Britain is utterly de-prioritised. They are mere symbols now, not potential citizens. They don’t speak English? They don’t feel British? Who cares? That’s diversity and it’s great. What gets lost in all of this is the thing that inhabitants of a city once aspired to achieve: citizenship.

People who feel uncomfortable with the cult of diversity are not nostalgic for a white past. They are not racist. What they want is connectedness. A common way of speaking and a common way of understanding. Really, they long for solidarity. And it is becoming increasingly clear that the top-down, furiously enforced cult of diversity is an authoritarian check on this yearning for solidarity. There is nothing positive in the institutionalisation of diversity as an end and a principle in itself. It grates against the ideals of shared heritage, shared values, social solidarity, common language, and national citizenship. Does London feel like a post-English city? I’ll leave that debate to others. To me, however, it is clear that London feels like a city without citizens, and while that might benefit elites that prefer their populations to be passive and separate, it is a disaster for the people of this great city and for the values of the United Kingdom.