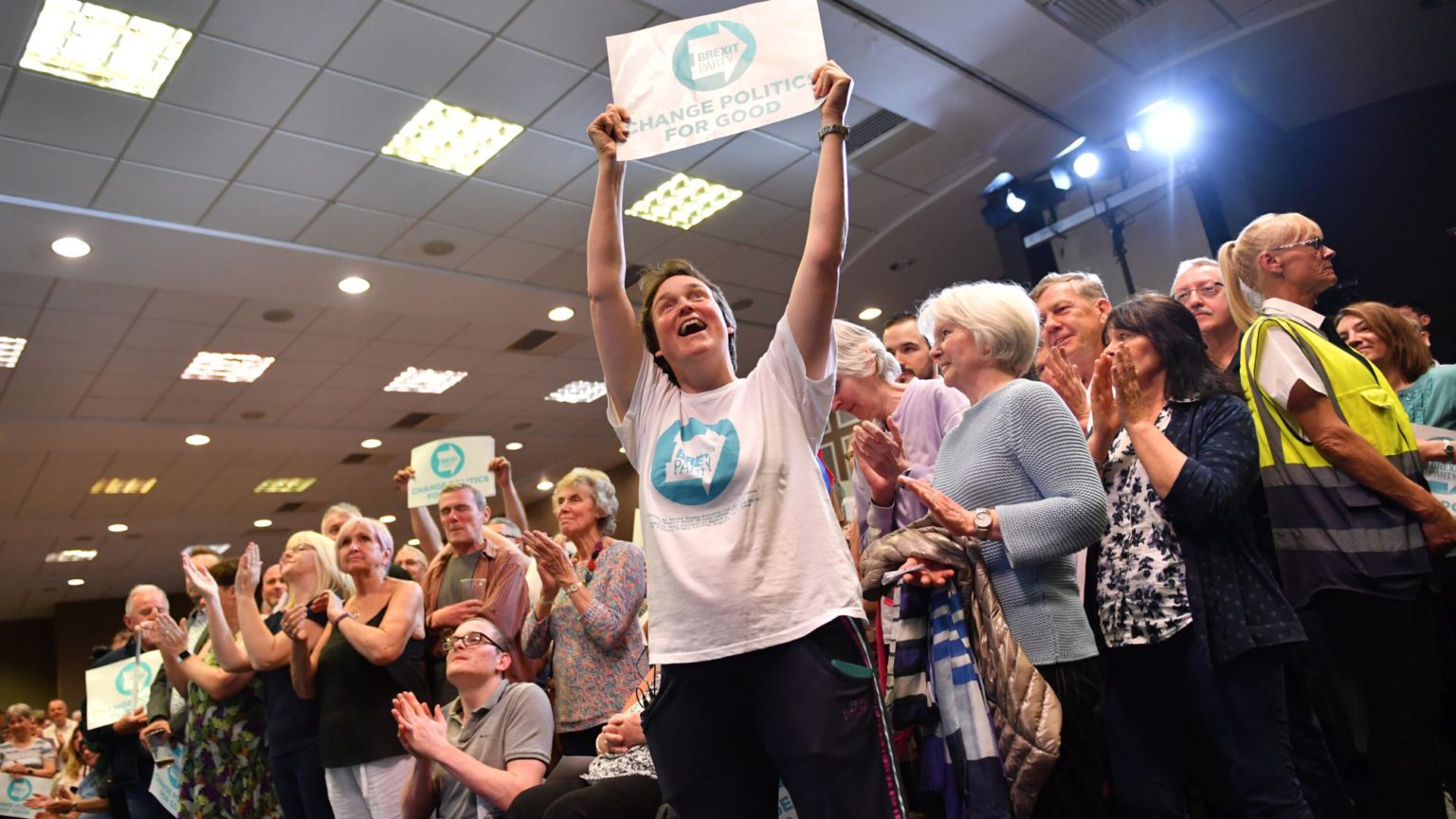 And still the establishment is in denial. Even following the stellar performance of a brand new party in the Euro elections, still the political establishment and its cheerleaders on social media are in a state of blinkered, fingers-in-ears denial about political feeling in the UK. How bad is their denial? Get this: the Brexit Party, barely six weeks old, soared to victory in the EU elections, decimated the Tories, conquered historic Labour-held territories like Bolsover and Hartlepool, and became the largest party in the entire European Parliament, and yet the No1 political trend on Twitter is… #RemainSurge.

Yes, these people, these inhabitants of the Brexitphobic echo chamber, have convinced themselves that this electoral revolt in which the Brexit Party steamrollered all the other parties is actually a victory for them. This takes self-delusion to giddy new heights.

‘This is a really strong night for Remain’, said Caroline Lucas, like a real-life version of that meme showing a dog saying ‘This is fine’ as his house burns down. ‘Tonight the Brexit Party wasn’t supported by around two-thirds of voters’, said Hilary Benn, perversely ignoring the millions of people who did vote for the Brexit Party, who vastly outnumber those who voted for his Labour Party. Alastair Campbell interpreted the election results as a mandate for a second referendum, which is almost as mad as saying Saddam Hussein had weapons of mass destruction that could be deployed within 45 minutes.

In the face of this colossal culture of denial among the political and media elites, let’s reiterate some basic facts. The Brexit Party battered Labour and the Tories. It won more than five million votes. It won 31.6 per cent of the vote, which is 8.4 per cent more than the Tories and Labour combined: the Tories got 9.1 per cent (fifth place) and Labour got 14.1 per cent (third place). The Brexit Party got 28 seats, making it the largest party in the European Parliament. It won in every single region in England apart from London, speaking profoundly to the massive political and moral divide separating the capital – the heart of the political establishment – from the rest of England. It also did spectacularly well in Wales, topping the poll and winning in 19 out of 22 council areas.

And yet myths are already taking hold, being feverishly promoted by pro-EU figures. The first is that the Brexit Party is ‘just’ – why just? – picking up the old UKIP vote and therefore its victory isn’t all that significant. Actually, the Brexit Party has got almost 32 per cent of the vote share, which is five percentage points higher than UKIP got at its high point in the Euro elections of 2014. The other myths – that the Brexit Party is only successful because it is a shadily funded, demagogic outfit, whose new MEPs probably have Russian roubles stuffed in their pockets – is the usual conspiratorial and anti-democratic rubbish we’ve come to expect from the rattled defenders of the status quo.

As for the ‘Remain surge’ idea. Get real. The two parties that are most explicitly anti-Brexit and have expressed their searingly anti-democratic intention to overthrow the mass vote of 2016 – the Lib Dems and the Greens – won a combined vote of 29.7 per cent. That’s two per cent less than the Brexit Party got. The most poisonously elitist anti-Brexit Party – Change UK – disappeared without a trace, winning 2.8 per cent of the vote. Remember how much Change UK was talked up by the liberal media? At one point the chattering classes really did see this party as the saviour of Britain from the horrors of Brexit and yet it won a pathetic, paltry level of electoral support – 600,000 votes to the Brexit Party’s five million.

Then there are Labour and the Tories, of course, whose votes some Remainer fanatics are including in their ‘Remain surge’ thesis. Now, it is my view, and many other people’s view, that both the Tories and Labour are pursuing a Brexit so ‘soft’ that it is not Brexit at all. But everyone knows it is also entirely feasible, and likely in fact, that these parties are still winning support from Leave people. To include all Labour votes in the Remain Surge idea is just naked intellectual dishonesty.

The Remain surge is a fantasy. The real, stirring story in this election is the Brexit Party surge; the surge of this youthful, renegade, pro-democracy party to the top of the polls. The broader story, of course, is one that many of us have seen coming for three years now: the reorganisation of British politics around Leave v Remain. The left v right feels increasingly like a relic. The Tory v Labour divide that defined British politics for so long moves very few people these days, except Momentum types who fantasise that they’re engaged in a far-left battle against evil Toryism. The divide now is between Leavers and Remainers; between those who have a strong sense of nationhood and those who see globalist institutions as the best means of organising political life; between those who value community and family and those who prefer to engage in the divisive cult of identity; between those who see democracy as their only means of expressing themselves and those who are suspicious of democracy for the same reasons – because it allows those people to express themselves.

So, ignore the bruised and increasingly unhinged establishment – these elections confirm how strong the desire for Brexit remains. However, at the same time, those of us who are pro-Brexit must be honest with ourselves, too. We cannot criticise the culture of denial among the establishment and then engage in denial in relation to our own side. And we have to confront the fact that the Brexit Party’s victory is not without its complications or problems. One thing about these elections that is depressing is the low turnout, especially in Leave areas. Turnout in general was just below 37 per cent, far lower than the continental average. In comparison with the 2014 Euro elections, turnout in the UK rose in Remain-voting areas but fell in Leave-voting areas. That should be of serious concern to everyone who views Brexit primarily as a brilliant, historic opportunity to tap into the hitherto unrecognised democratic energy of ordinary people.

In the mostly pro-Remain south east of England, turnout rose from 36 per cent to nearly 40 per cent. But in the West Midlands – very strong Brexit territory – it fell, to around 31 per cent. It also fell slightly in the Brexit territory of the North West (33.1 per cent). Most worryingly, turnout was lowest in precisely those areas that enjoyed a very high turnout and a very strong vote for Brexit in the 2016 referendum: in Stoke-on-Trent it was 26.5 per cent; in Sandwell, 28 per cent; and in Walsall, 28.7 per cent. Sadly, the lowest turnout was in one of the nation’s most pro-Brexit areas – Hull. Just 24 per cent of voters in Hull voted in these elections.

This tells us a very concerning and potentially even tragic story: that the elite’s relentless campaign of voter demoralisation over the past three years has reaped dividends. That the incessant demonisation of Brexit, and the establishment’s signalling that it will simply override those people who voted for it, seems to have convinced some people that it is futile to defend or restate their desire for Brexit. It also tells us that the Brexit Party, or some other force, has much work to do to tap into the democratic potential of the ‘left behind’. Brexit is the best opportunity in our lifetimes to re-energise democracy by including previously ignored voices, by drawing into the decision-making process the people of Hull, Stoke, Walsall, Boston, South Wales and others across the UK who for decades have effectively been disenfranchised by a political class that isn’t interested in them and a technocratic political system that filters out their views and opinions. Can the Brexit Party do this? That remains to be seen.

For democrats, this election is a cause for celebration and for reflection. Let’s celebrate that the Brexit spirit and the thirst for greater democracy remains strong in many parts of the country. And let’s reflect on the fact that some people, especially in poorer areas of the country, seem to have arrived at the understandable conclusion that their democratic voice counts for nought. Engaging the ignored masses, tapping their democratic insights, genuinely drawing their convictions and concerns and beliefs into the heart of the political sphere – this is now the key task of everyone who is committed to the idea of Brexit, democracy and radical political change in this country.