Spare us your tears, Theresa

May will go down in history as one of Britain’s worst prime ministers. 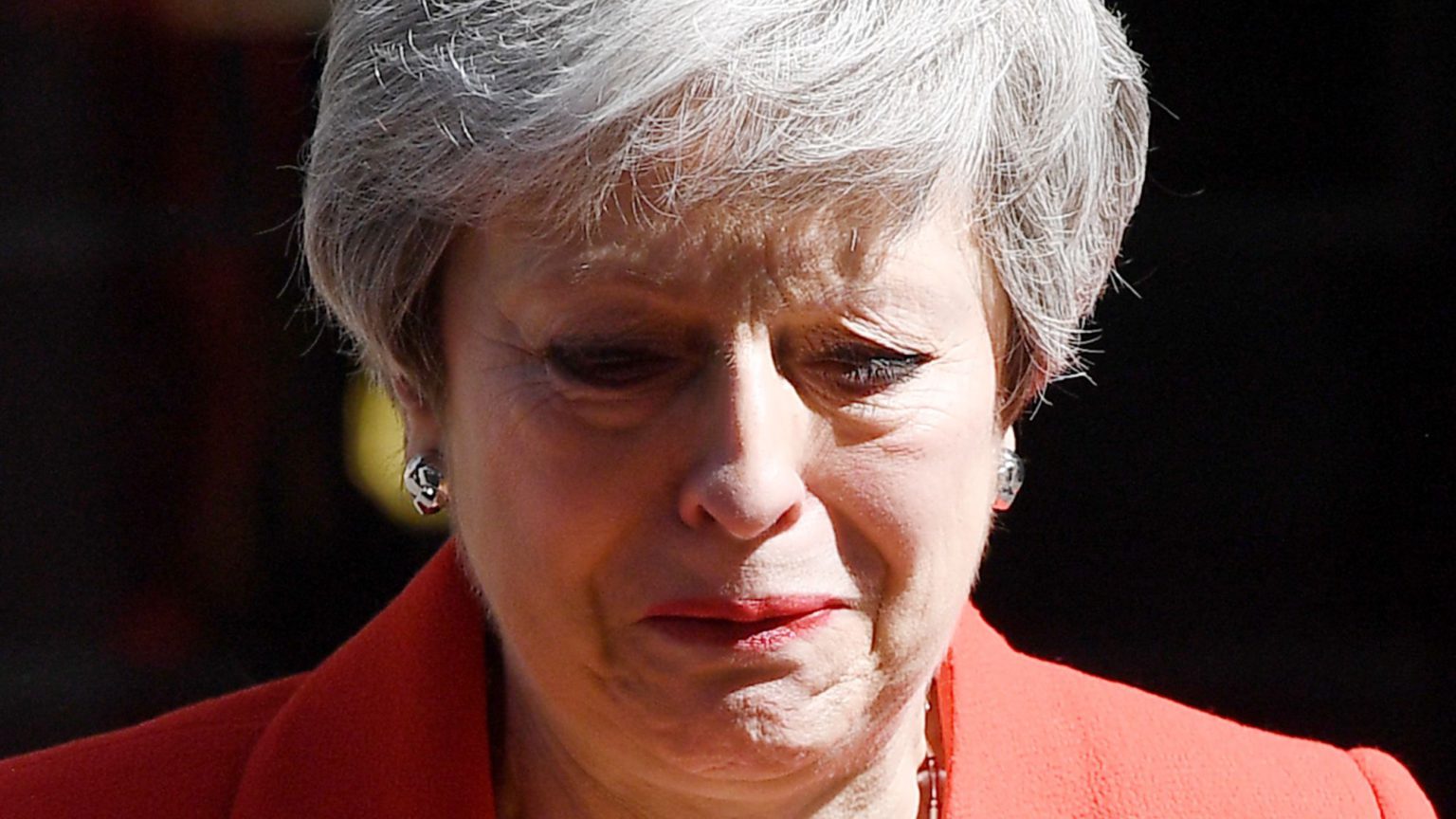 The end of May is finally here. Today in Westminster – at her umpteenth lectern appearance, addressing a weary press and public – prime minister Theresa May announced that she would step down as Tory leader on 7 June. Her voice cracked as she spoke of the honour of ‘serving the country I love’, before turning back to walk into No10. But she can spare us the tears, and commentators can spare us their pious sympathy.

Theresa May will go down in history as one of the worst prime ministers ever to lead this country. She came to power at a time of tremendous national crisis, but also opportunity. The Brexit vote was a demand for democratic and economic renewal, which at first she did well to channel in blustery speeches. But as her premiership has worn on, she has squandered that opportunity, and driven us further into crisis.

The Brexit deal she struck with the European Union was designed – she said – to bring Remainers and Leavers together. It would end free movement but keep us close to the EU. But in the end, all it achieved was to unite both sides against her, in parliament and the country. It was a deal that left us with less say over the EU rules that bind us than we have as members. She stood in the middle of the road and got hit by traffic from both directions.

May spoke in her speech today of compromise. But her eventual undoing over her ‘compromise’ deal reminds us what a necessarily binary issue Brexit is. You are either in or you are out. The so-called Soft Brexit option has always been sophistry. Whether or not we leave the EU has always been a question of whether we want stability or an uncertain but democratic future. This is how voters split at the referendum and remain split today.

May said she wanted to implement Brexit but in such a way that didn’t risk jobs. She has managed to achieve neither. Almost three years after Brexit we await the result of another EU election in which we took part. The uncertainty over our future arrangements is damaging jobs and industry. Meanwhile, we remain powerless under EU rules to intervene as we see fit – as the collapse of British Steel this week reminds us.

This mess is not entirely of May’s making. The vast majority of MPs in parliament at the time of the referendum backed Remain. The Labour Party has been playing games, rejecting May’s deal despite there being barely a cigarette paper between it and their own convoluted plan, while more staunchly Remain Labourites have pushed for a second referendum. But her miscalculations and cowardice have been stunning.

She called a snap election in 2017 to gain a bigger mandate for Brexit, but ran a campaign that was all about her. She confused Brexit’s popularity for her own, inflicting her robotic slogans and negative charisma on an unsuspecting public. She was forced into a screeching u-turn over her controversial ‘dementia tax’, while insisting ‘nothing has changed’. In this age of revolt against technocracy, she was exposed as an ideas-lite technocrat.

She lost her majority and has since buckled to every EU and elite-Remainer demand. Brussels set the timetable for talks, rigging them in its own favour. She signed up to the so-called backstop, even though she didn’t understand it. Parliament took No Deal off the table, leaving us to swallow whatever Brussels gave us. And this week she offered MPs a vote on a second referendum, something she said she would never countenance.

Of course it isn’t just May’s handling of Brexit that will be judged harshly by the history books. When she first came to power – after a sideshow of a Tory leadership race – she stood on the steps of Downing Street and promised to tackle the ‘burning injustices’ around race, class and gender. In her speech today she lamented that she didn’t have more time to do so. And yet she leaves Britain a more unjust place than before.

What she did succeed in implementing were tokenistic schemes, from the race-disparity audit to new gender-pay reporting. Meanwhile, the disastrous effects of policies she oversaw in the Home Office began to come to light. The Windrush scandal revealed that elderly British citizens who came to the UK from the Commonwealth as children were being denied jobs and medical care and even deported, purely for not having the right paperwork.

She was the most hardline on migration in David Cameron’s cabinet. She thought this is the issue on which Westminster is most out of touch, and she set about bringing down numbers by any means necessary. But she confused the public’s concern about migration with a disregard for – even animus towards – migrants. The outpouring of support for the Windrush generation, most of all from older Britons, showed how wrong she was.

None of this is to say that May was a racist. What was most destructive about her was that she didn’t believe in much at all. She was a technocrat, a manager, a box-ticker. Migration policy for her was about moving numbers from column A to column B, regardless of right and wrong. And the EU negotiations were about ‘getting Brexit over the line’, even if it meant selling out its core component – democratic control – in the process.

Theresa May is a member of a technocratic order, a distant, unaccountable and bloodless way of doing politics, summed up by the Brussels bureaucracy, that people across the West are rising up against. But as we face the prospect of another dreadful Tory leadership race, and (brace yourself) another General Election, we are still casting about for alternatives. Technocracy may be dying, but the new politics is yet to be born.