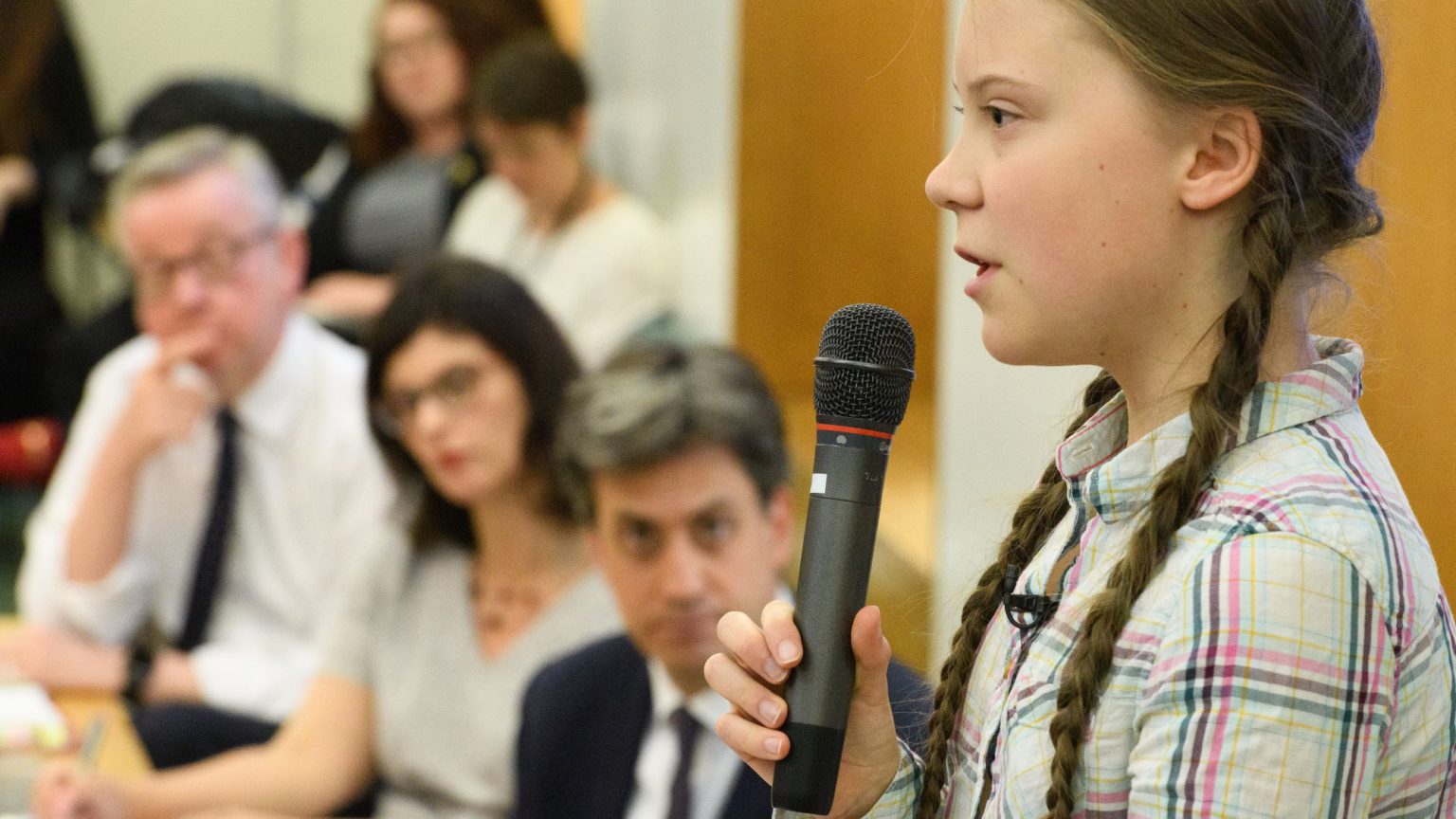 Brendan O’Neill was ill-advised to comment on Greta Thunberg’s appearance in his critique of her role as the messiah of environmentalism. Inappropriate in itself, it distracted attention from his important challenge to her role in promoting the spectre of imminent ecological catastrophe. The responses to his article have largely ignored Thunberg’s apocalyptic millenarianism while emphasising her Asperger identity as central to her transcendent political status.

‘I speak on behalf of future generations’ was Thunberg’s opening line in her speech to British parliamentarians. These are indeed the words of a prophet – one claiming an even bigger constituency than the ‘99 per cent’ of humanity whom the Occupy Movement of 2011/2012, forerunner of today’s Extinction Rebellion, claimed to represent. Many commentators who are critical of the claims of populist politicians to speak on behalf of ‘the silent majority’ or to have privileged access to the minds of the masses seem to accept without question Thunberg’s status as the self-appointed tribune of the yet unborn.

Thunberg’s gloomy message that we are facing ‘the end of civilisation as we know it’ echoes the familiar ‘Repent the End is Nigh’ slogan of evangelical Christians. Like the millenarian preachers of 19th-century America, Thunberg has appointed a precise end time: ‘10 years, 252 days and 10 hours’ from the moment of her speech in London. William Miller, founder of the Seventh Day Adventists and promoter of the Great Awakening evangelical revival, proclaimed 22 October 1842 as the Last Day. Though the Great Awakening was followed by the Great Disappointment when the promised messiah failed to appear, similar movements have reappeared around the world at times of social crisis. In a famous chapter in The Making of the English Working Class, the historian EP Thompson characterised as ‘the chiliasm of despair’ the millenarian movements that emerged in Britain following defeats of the early labour movement. One striking difference is that, whereas Miller and his ilk, including ‘the deluded Joanna Southcott’, anticipated a messiah bringing redemption and salvation as well as hellfire, Thunberg and her secular modern followers believe that this really is the end: ‘Now we probably don’t even have a future any more.’

Like all preachers, Thunberg has a dogma – ‘the message of the united climate science’. Climate science is here elevated to the status of revealed truth, as The Science. It is also boosted as ‘united’, in the sense that it is backed by a consensus of authorities, including politicians and religious leaders as well as scientists. For much of the 20th century, the same could be said about the now discredited racial science and eugenics. Whatever the complexities of the controversy about carbon emissions, it is certain that science, even The Science, cannot predict the future. From Thomas Malthus in the 1790s to the Club of Rome in the 1970s, environmental science has a poor record in its projections of future trends. When asked at Westminster how she dealt with those who questioned her message, Thunberg’s response – ‘I don’t’ – won applause. The dogma of ‘the united climate science’ is, like divine revelation, beyond debate. To question it is the 21st-century equivalent of heresy, or a manifestation of the psychological disorder of ‘denialism’.

Thunberg’s autistic identity raises other worrying issues. Commentators have attributed the ‘glorious simplicity’ of Thunberg’s arguments to her diagnosis as autistic. In a radio interview, she suggested that her autism makes her ‘see things from outside the box’. Not only does she think that autism provides intellectual insights – she believes it also confers moral qualities. ‘I don’t easily fall for lies, I can see through things’, she says. Congratulating Thunberg, celebrity chef Jack Monroe, who has also been diagnosed as autistic, describes her own autistic traits as ‘a kind of superpower’ (which she has harnessed to the production of exotic recipes).

Thunberg has acquired the aura of ‘the blessed fools of Old Russia’, whom the autism specialist Uta Frith has suggested may have merited a diagnosis of autism. Though regarded as eccentric and apparently oblivious to social convention, the ‘holy fools’ were considered to have qualities of innocence and virtue that allowed them ‘to confront bishops and tsars’. By contrast, Thunberg’s moral message has received the endorsement of the pope, the former Archbishop of Canterbury, the plutocrats of Davos, the United Nations and the European and British parliaments, if not yet any tsars. It is bizarre that a creed supported by such a chorus of reaction should be considered by some, such as the Guardian’s Aditya Chakrabortty, as a left-wing cause.

For journalist Ian Birrell, Thunberg’s insistence that ‘being different is a gift’ is a message ‘so pertinent to our troubled age, arguably as important as her bold stand on climate change’. He argues that the difficulties facing autistic people are the consequence of ‘blinkered attitudes and bigotry’ that arise from a lack of respect for difference. He claims that the abuse of people with autism – and their premature mortality – results from ‘indifference and insidious discrimination’. As the parent of a young man with autism and severe learning disabilities, I struggle to regard autism as a gift. I am also wary that celebrating ‘difference’ indulges a sort of identity politics that merely encourages fragmentation and isolation. Like the tragically murdered MP Jo Cox, I believe that we have more in common than divides us and that we are stronger together. As a doctor, I am also well aware of the indifference and other poor standards of care that people often experience under the NHS – but ill-treatment is sadly by no means exclusive to people with autism.

I am also sceptical about locating the blame for the problems facing people with autism in the prejudices of ordinary people (there is a striking parallel here with the misanthropic outlook of the environmentalist movement). In more than 20 years as a parent, I have often had occasion to be grateful for the kindness of strangers and for the tolerance and understanding of people faced with my son’s sometimes challenging behaviour in public places. Birrell writes about ‘girls like Greta’ facing ill-treatment in secure units. But the main reason why many young people languish in such units, eight years after the Winterbourne View scandal, is the lack of suitable accommodation, day centres and support systems in the community. This has nothing to do with popular prejudices, but is the direct result of the austerity policies imposed on local authorities by the government of David Cameron (for whom Birrell worked as a speechwriter). ‘Autism awareness training’ for all NHS staff and sentimental pieties about ‘difference’ and ‘autism as a gift’ will do little to improve the plight of most people with autism, who need more and better community resources, and properly paid and well-trained care staff.

When Extinction Rebellion co-founder Gail Bradbrook invoked the authority of Sir David Attenborough in support of her claim of impending mass species extinction, breakfast TV host Richard Madeley observed that ‘he’s just a broadcaster, not a saint’. But, of course, despite having been chastised by Cardinal George Monbiot for a lack of environmentalist zeal in the past, Attenborough is indeed a secular apostle in the church of impending planetary doom, in which Thunberg has been elevated to the status of patron saint.

Brendan O’Neill is right to point out that the appointment of Thunberg by the green movement as ‘the messiah of their miserabilist political creed’ is ‘unforgivable’. The deference of the political establishment to this child-like saviour, and its approval for school protests supporting her environmentalist crusade, reflects the abdication of adult authority in British politics, of which David Cameron is the most abject personification. Like that other precocious teenager, Shamima Begum, Thunberg has been radicalised by an older generation which ought to be more careful about exploiting childhood innocence in pursuit of their political agenda, and ought to teach children to think for themselves.