Why we wept for Notre Dame

Yesterday’s inferno reminded us of the importance of the human legacy. 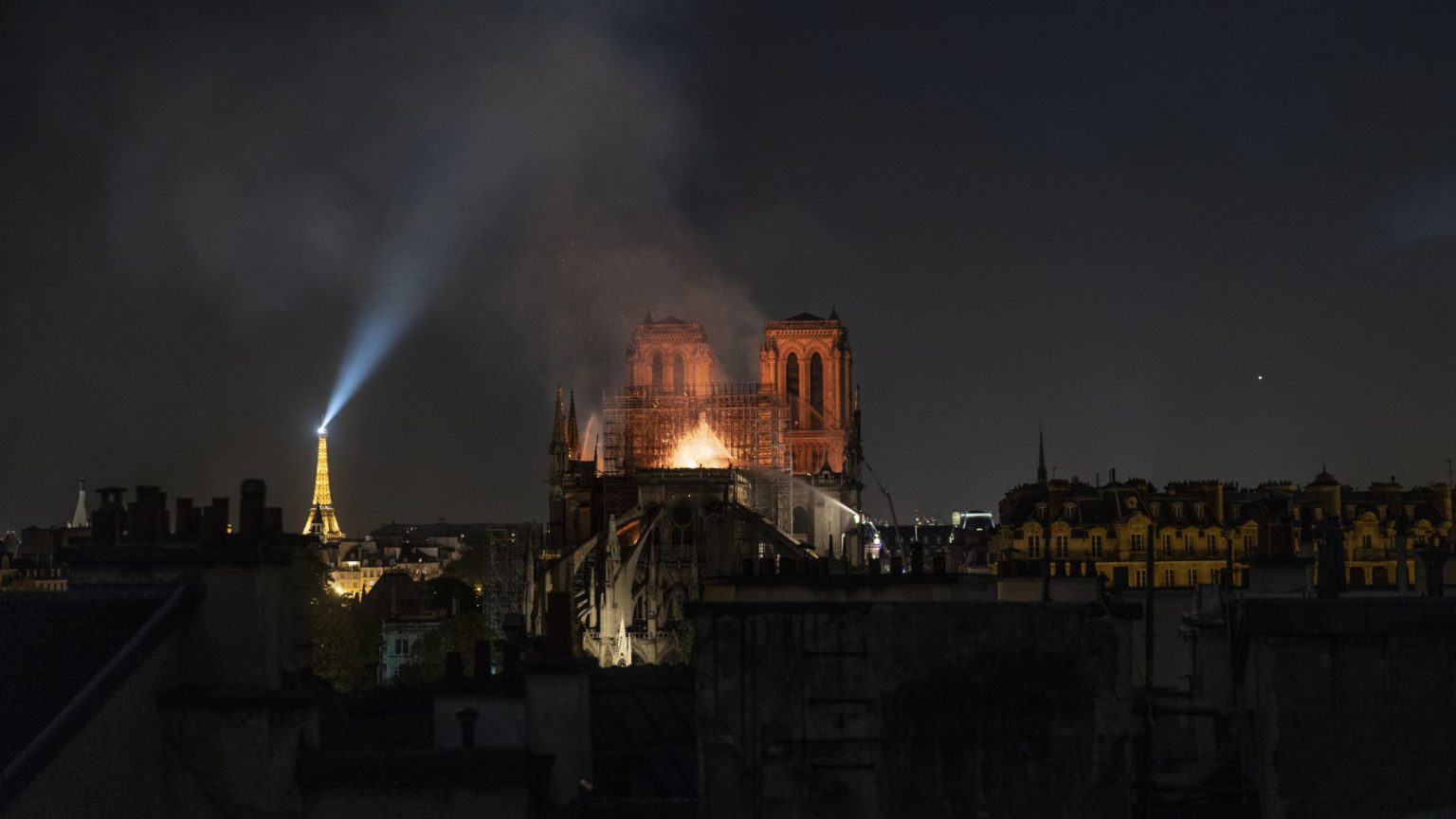 Two of the magnificent rose windows in Notre Dame cathedral in Paris date back to the 1250s. Astonishingly, much of the stained glass in these windows that dapple the cathedral and its worshippers in blue and red sunlight is the original glass. It’s the glass that was salted and stained and infused with metal by Parisian glassworkers nearly 800 years ago. It is staggering to think of who has had the sunlight filtered on to their faces by this centuries-old glass. King Henry VI, who was crowned in Notre Dame in 1431. Napoleon, coronated as emperor there in 1804. Charles de Gaulle, who led the celebrations of the liberation of France inside the cathedral in 1944. Also me, and very possibly you, given that, as much of the coverage of yesterday’s inferno reminded us, Notre Dame is the centre of Paris, the heart of the city, and the most popular tourist site in Western Europe. Millions of people – kings, cardinals, presidents, workers, paupers, tourists – have been illuminated by the same glass that has survived religious wars, revolutionary tumult, Nazi occupation and, now, fire.

The windows survived the blaze. As did much of the church’s interior, the two bell towers, the religious relics, and many artworks. The spire fell and it is feared some artworks were destroyed. The response to the fire was extraordinary. In Paris itself there was an outpouring of grief. People said they felt as if they were watching a loved one die. Catholics gathered near the cathedral as it burned to sing ‘Ave Maria’. The radical leftist Jean-Luc Mélenchon captured very well how French people felt when he said the reason they adore Notre Dame, the reason they are drawn to its power and glory, is because they know ‘human beings have surpassed themselves in bringing Notre Dame into the world’. In Notre Dame, even those convinced of the ‘absurdity of the human condition’ can see ‘the apotheosis of the intellect and the labour of thousands of men and women over the centuries’, he said. The Eiffel Tower might be a magnificent feat of engineering, but Notre Dame is something different. It is, in the words of Victor Hugo, ‘the offspring of a nation’s labour’. It is the wisdom and legacy of France itself in concrete form.

Of course it is even more than that. It is the legacy of humanity in concrete form. This is why the profound concern for Notre Dame spread so far beyond France’s own borders yesterday. Let’s leave to one side the deranged woke tweeters who laughed at the inferno on the basis that France, when it was an imperial power, burnt down its own fair share of buildings, blah blah blah. Such Francophobia and misanthropy was very much in the minority. The vast majority of people recognised that something of immeasurable human worth was under threat. What the widespread humanist concern for the fate of Notre Dame spoke to is people’s continued attachment to the ideal of legacy, to what is in many ways the founding principle of human civilisation: that we transmit culture and knowledge and art from one generation to the next. We recognised that the flames were consuming more than wood and stone; they were consuming tradition, the past itself. And for all of today’s cult of the new, most people recognise that our societies and our lives only make sense as a result of the gains of the past transmitted to us by our elders, which we then transmit to the next generation.

In the words of Hugo – author, of course, of The Hunchback of Notre Dame – wonders of architecture such as the Notre Dame may spring from the minds of ‘men of genius’, but they are ultimately ‘a deposit left by a whole people’. Great structures like Notre Dame are ‘the piled-up work of centuries’, ‘the residue of successive evaporations of human society’, a ‘species of formation’, he wrote. ‘Each wave of time leaves its alluvium’, he said. This is why Notre Dame is viewed as such a powerful symbol of human civilisation: because it is human civilisation; it is a stone expression of the transmissions that distinguish human beings from all other creatures. Too often today the idea of legacy is sneered at. The past is viewed as a source of shame. The Year Zero worldview is all the rage in elite circles. It can be seen in the efforts of bourgeois student radicals to tear down ‘offensive’ statues. Even in the propaganda of the European Union, which presents the birth of the EU as the starting point of peaceful, civilised Europe – witness how many pro-Brussels propagandists speak of Europe in the pre-EU era as a hotbed of war and extremism that only our technocratic betters managed to tame. Notre Dame, this deposit left by a whole people, is a permanent rebuke to such Year Zero arrogance.

People mourned for Notre Dame when it was in flames because they value tradition, they yearn for legacy, and they see the past, not as a series of shameful episodes best forgotten, but as the source of what we know and who we are and what we ourselves must now do for future generations. They felt grief-stricken because they want Notre Dame to stand for the rest of time. It will.