The toddlers have taken over

The Brexit spectacle has exposed the infantilism of the political class. 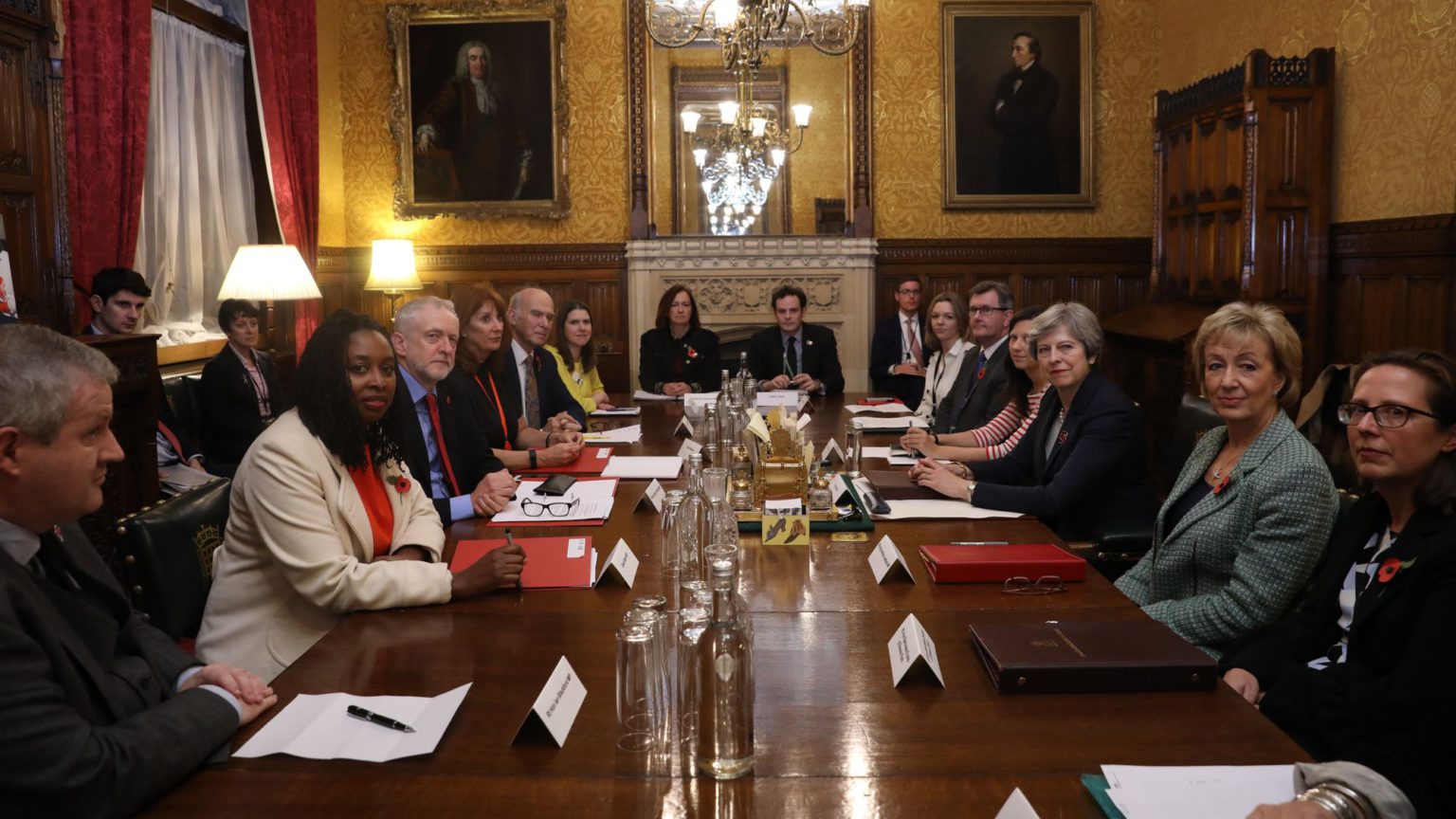 As the parliamentary pantomime over Brexit carries on procrastinating, the audience is united on one thing: utter embarrassment about the behaviour of MPs. Almost three years on from the EU referendum – the referendum they voted to hold, the decision they voted to deliver, the commitment they made in the last General Election – they still can’t bring themselves actually to do anything. They won’t deliver Brexit because they don’t like it, but they can’t agree on anything they like enough to have instead. So they throw a tantrum.

Theresa May saying the same thing, again and again, even though she keeps being told ‘no’. Jeremy Corbyn, sulking in the corner, refusing to come out to play unless it is a game he wants to play. (We are still guessing what that game might be.) Now they seem to be shunning their own friends to play besties with each other. Ministers refuse to do what their boss tells them to do; MPs resign from their parties, but refuse to leave the House; politicians and civil servants whine about their squabbles to whichever media outlet will listen. It is classic toddler behaviour – possessing the will to resist without the words to say why, or the maturity to come up with a solution.

We are drowning in emotional incontinence. Just one recent example comes from The Times, in which one Remain-voting Labour MP from a Leave-voting constituency is writing an anonymous ‘secret diary’ to chronicle his or her personal fears and frustrations. (I would like to think it is satire, but suspect not.) Leaving the House of Commons on Friday, for this MP, was ‘horrible’ – not because this was the day that parliament formally failed to deliver on its promise, but because there was a big rally outside and some nasty men on the Tube. ‘I fled home for the weekend, took all of Saturday to recover a shred of mental energy and before I knew it Sunday was finished’, states the diary entry of 2 April, with the prosaic elegance of a primary-school assignment. ‘The clock ticks. Darkness looms. God help us.’

God help us indeed, if these are the people running the country. Sadly, they are – although maybe not for long, which is why they are scared of a General Election. They are terrified of everything else as well – No Deal, May’s Deal, Revoke Article 50, another referendum, a long extension involving elections for the European Parliament. Anything, in fact, that might require them having to argue with people outside the echo chambers of Westminster. ‘I cannot go back to my constituents and tell them…’ they say, in a performance of accountability which means quite the opposite. They don’t want to go back to their constituents to justify anything. They would much rather be left alone to play furtively with their ‘consciences’, and bicker with their mates about whose fault it all is.

This whole Not Brexit moment has exposed so much – and the current spotlight is on the infantilism of the political class. After years of pretending to represent something more than the sum of its parts, parliament stands revealed as a collection of 650 individuals who simply cannot grasp that this is more than just a ‘job’, and that they are there to represent people other than themselves. The pathetic, fragile egotism currently on display crosses the political parties, and the Leave / Remain divide. For all the talk about taking back control, most of the parliamentary Leavers would rather fall behind May’s Brexit In Name Only deal than take responsibility for the consequences of an actual Brexit. Parliamentary Remainers want to avoid any kind of Brexit, but most of them don’t even have the guts to say it, preferring endless rounds of the ‘fantasy deal’ game of Remain By Another Name.

For those of us who voted Leave because we wanted more democratic control and accountability, the current impasse presents a challenge. Why would we want to give more responsibility to people who don’t want it, and can’t hack it? Yes, we can vote them out, but who could we vote in? This is not a new problem, and it has not been caused by the EU referendum. Indeed, the Brexit vote was a reaction against the aloof ineptitude of the British political class as much as it was a rejection of the technocratic managerialism that drives the institution of the EU. But in bringing things to a head, the referendum also provided the possibility for something more solid, mature and future-focused. The danger now is that this possibility will be squandered.

The childishness of MPs is a reflection of a wider process of depoliticisation, where people’s capacity to change their circumstances through democratic decision-making has been gradually whittled down, and the idea that citizens are political subjects with a responsibility to shape their society has been presented as quaintly old-fashioned. It is out of tune with the modern, politics-as-HR approach in which policymakers decide what has to be done and ‘consult’ the public as ‘stakeholders’, to work out the most effective form of messaging and to ensure compliance. Up until the EU referendum, political events such as General Elections were packaged in this way. ‘Participation’ and ‘engagement’ were seen as important, but mainly to give feedback on matters that had already been decided. The public as a whole were cut off, with some then being selectively ‘included’.

This depoliticisation made life easier for politicians, although they were aware of its downsides. MPs who represent nothing beyond themselves face constant questions over their legitimacy, leading to the insecurity now palpably on display. They become risk-averse, oversensitive, and kneejerk in their responses. Public debate also suffers. When there is no mechanism for people to make a collective difference to their world, they turn inwards and become demoralised; when there is no framework through which social and political problems can be debated, personal gripes and prejudices dominate.

This was why the EU referendum was so refreshing. Despite Cameron’s dodgy motivations for calling the referendum, that moment in 2016 presented an unusual opportunity to reinvigorate politics. People – of all ages, social classes, across the whole of the country – found themselves engaged in debates about how they might shape the future. After two decades of being patronised by identikit politicians from 50 shades of Third Way, this was a chance to test the extent to which politics was about us, not them. ‘This is your decision’, they said. ‘The government will implement what you decide.’

When the unexpected result came in, political disagreement quickly became subsumed by crude stereotyping and spiteful name-calling, as different cliques rounded on one another. But once that died down, people started talking to each other again about the issues involved, and where we should go next. Although most people didn’t switch from their initial Leave / Remain positions, there seemed to be more understanding about the complex factors that drove both the Leave vote and the Remain entrenchment. Politics came back, a bit.

And now? Whatever happens, we have a problem. The only thing that parliament has actually decided is a double negative: it doesn’t want No Deal. So if Britain crashes out because MPs cannot get their act together enough to stop it, we will be dealing with the mother of all tantrums by a political class that doesn’t want control, responsibility, or anything to do with us. This will not be pretty. At best, it would provide the space for the eventual development of some grown-up politicians, coming from people prepared to talk openly to other people about the kind of future they want to build. At worst, it could result in the kind of panicked authoritarianism we are currently witnessing in Macron’s France, where the state is behaving like the worst kind of school bully.

But this would be better than the alternative. The alternative to implementing the decision of the referendum – in content, rather than in name only – is to promote a more aggressive depoliticisation than anything we have seen before. This would explicitly acknowledge that Britain’s political leaders are managers of a subsidiary company, rather than representatives of a sovereign state. Voters – from both sides of the Leave / Remain divide – would be given the stark message that their vote only counts when it counts for very little; that all important decisions will be made over their heads. So why bother with the pretence of participation, engagement, or political debate? As we are seeing throughout Europe, people’s frustrations can only be ignored for so long – they will erupt in a form that is far more destabilising than a vote cast politely at the ballot box.

If it all goes this way, there will be many losers. Ironically, the biggest loss will be to younger generations. We have relentlessly been told that Leave was a vote by old people to damage the prospects of their children and grandchildren; that because young people predominantly voted for Remain in 2016 and have the longest to ‘live with the decision’, it should be inferred that all future generations will want to stay in the EU and maintain the status quo. Yet in the name of upholding the interests of the young, the actual import of their decision-making power – the vote – is being diluted. Those young people who were switched on to politics by the debates around the referendum will find themselves deliberately switched off again, on the basis that their true interest lies in doing what they are told.

The clearest indictment of our infantile moment is that, in their refusal to honour their commitment to voters, the toddlers in parliament are hiding behind the kids.

Jennie Bristow is senior lecturer in sociology at Canterbury Christ Church University and an associate of the Centre for Parenting Culture Studies. Her new book, Stop Mugging Grandma: The ‘Generation Wars’ And Why Boomer-Blaming Won’t Solve Anything, will be published by Yale University Press in June.