China vs Australia could heat up at any minute. 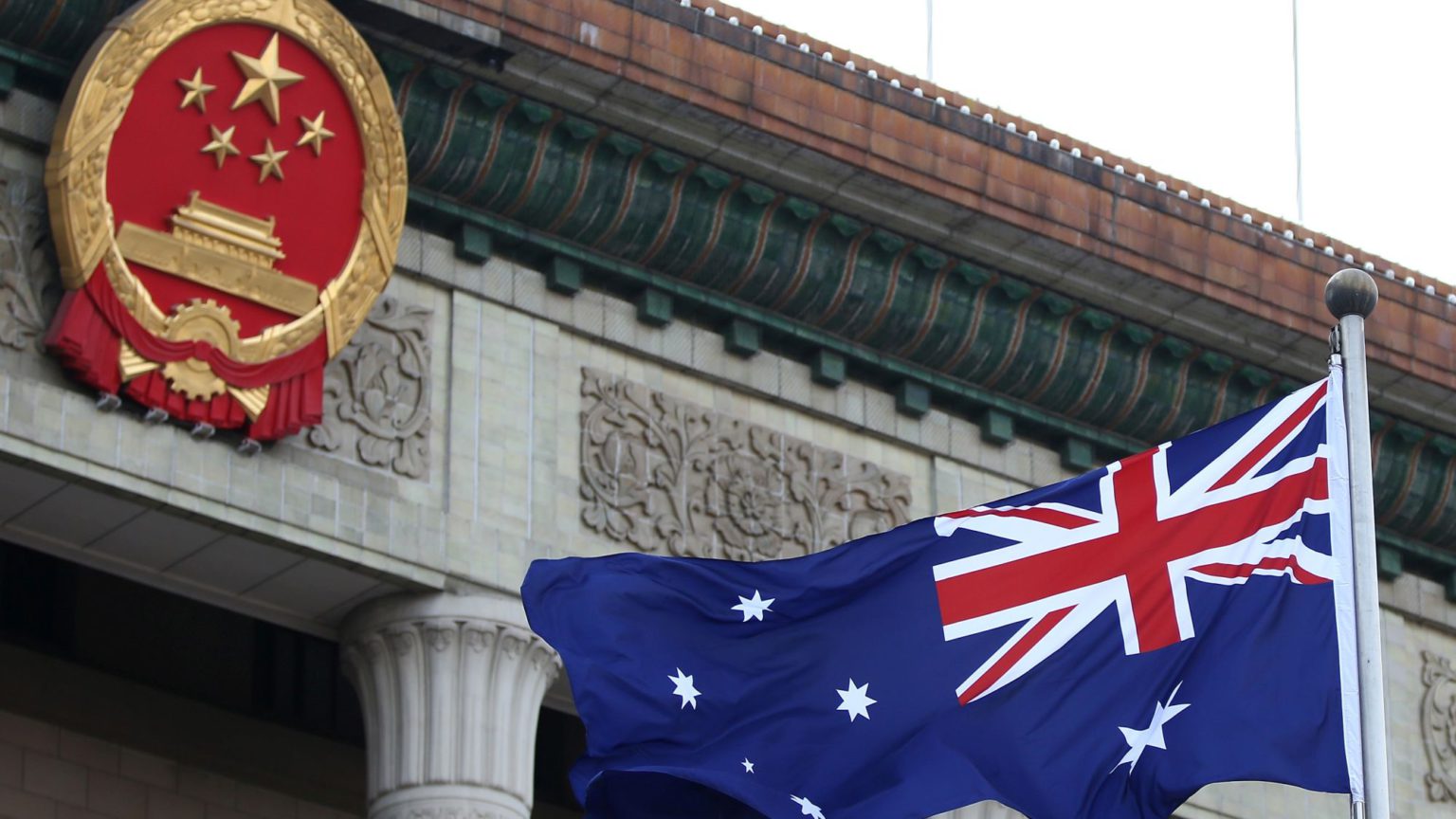 Australia is the new Finland in the coming Cold War, a nation wedged uncomfortably between superpowers, crossing its fingers and hoping for the best.

No Western nation faces such risk of suffering collateral damage should Chinese Communist hubris cross the hard-won boundaries of freedom. Australia is the largest per capita Western exporter to China.

The China doctrine that has prevailed for more than 40 years in Australia – that the introduction of freer markets would pave an inexorable path towards political freedom – is well and truly exhausted. The trajectory since Tiananmen Square has been in the opposite direction.

Few outside an elite circle, however, can detect the ‘unstoppable momentum’ towards democracy in China, which Tony Blair glimpsed back in 2005.

Yet those with vested interests to protect, academic China Hands, groomed ex-politicians, Sino-focussed business executives, and the growing network of Western institutions compromised by Chinese funding, are reluctant to adopt a less benign picture of China.

Unlike Finland, Australia’s proximity to a potential Cold War foe is not primarily geographic. By air, Helsinki is almost 3,000 km closer to Beijing than Sydney. Yet Australia’s peculiar isolation from its Western allies – 14 hours flying time from the US West Coast and 24 hours from London – makes it strategically exposed. Its rich endowment with resources means that it is of considerable strategic interest to an expanding economic superpower.

Folk memory of Australia’s vulnerability in the Second World War after the fall of Singapore still fuels occasional outbursts of anti-Churchillian resentment for his temerity in putting the defence of Britain’s lifeline in the North Atlantic ahead of the defence of Australia.

It fell to the Americans to come to Australia’s defence, a relationship that forged the Anzus treaty by which Australia and New Zealand are bound in a pact of mutual defence.

An unexpected consequence of that 1951 security pact is best summed up as the Taiwan dilemma. Should China launch an attack on Taiwan, and the US in the cause of freedom came to Taiwan’s aid, Australia would be contractually as well as morally committed to join in the fight.

Which could be somewhat awkward, to put it mildly, now that Australia’s and China’s economies have become so entwined. China is Australia’s largest trading partner and Australia is China’s sixth. The convenient arrangement by which Australians dig up dirt, pack it off to China and receive cheap and increasingly elaborate manufactured goods in return has served both countries well.

That Australia avoided recession in 2008 was largely down to China, where the demand for iron ore and coal barely relented. Australia’s proud boast that it has experienced the longest run of unbroken economic growth – 28 years and counting – owes much to China. Yet Communism being Communism, China’s commitment to free trade and free markets is inconsistent and opaque. When China declared its ports closed to Australian coal last month, it was a reminder of the dangers of relying too heavily on China.

Was China simply trying to use up a coal surplus? Or was Beijing responding to Australia’s firm rejection of Chinese Huawei technology being incorporated into Australia’s 5G phone network? Or perhaps it was a bit of both?

The trade relationship is developing. The market for Australian agricultural products in China is expanding with the growth of a Chinese middle class. Air containers loaded with everything from fresh milk and farmed salmon to Coonawarra Cabernet fly out of Australian airports every evening.

The biggest growth markets, however, are in tourism and education. Walking Circular Quay these days evokes flashbacks of life in Hong Kong or Shanghai with pedestrian jams of face-masked visitors, fearful of catching goodness know what waving selfie sticks that threaten to take out an eye.

The Chinese civic presence is enlarged by the recent growth in Chinese students at Australia’s most prestigious universities, collectively known as the Group of Eight.

Three out of 10 new entrants at the University of Sydney this year will come from China and roughly one out of 10 from India. The influx is changing the culture of the universities considerably, not least in student politics. In the recent election at Sydney University for Student Representative Council president, the green-tinged Grassroots group and Labor candidates got fewer votes between them than a fresh-faced Chinese citizen called Jacky He representing the Panda Warriors.

He is a leading figure in the China Development Society, an international student body which aims to ‘promote a global understanding of China’ – that is to say, Beijing’s official interpretation of China, free from discussion of the three Ts: Taiwan, Tiananmen and Tibet.

In fourth place in the presidential race was Alex Yang, a veteran of the Taiwanese army standing on the Advance ticket. On one reading, the contest might, therefore, be seen as a proxy war for the battle for the Taiwan Strait.

The number of Chinese students enrolling at Australia’s top eight universities more than doubled between 2012 and 2016, to 23,000. Conservatively estimated, these students generate more than $1 billion in fees alone.

The universities have come to depend on Chinese income, as has the broader economy. Were China to bar its students from enrolling in Australian universities tomorrow, as it could imaginably do in retaliation for a real or imagined slight, it would trigger a localised recession. But such are the perils of trading with a nation with an only partially free economy, where business and geopolitics uncomfortably mix.

Adding to Australian anxiety is the acknowledgement, reluctantly and spasmodically made, that the booming trade relationship cannot grow forever. As the Chinese economy matures and demand for commodities softens, there must inevitably be a partial reversal of the huge rise in the Australian standard of living.

Yet money isn’t everything, as they say, and Australians have an ingenious way to survive by cashing in on the promise of ‘wealth for toil’ enshrined in their national anthem. In the long term, the bigger danger of the Australia-China relationship is the moral compromises involved in dealing with an authoritarian state that holds values antithetical to ours.

The People’s Republic of China has been under the same illiberal, inhuman management since its formation in 1949 when the Chinese Communist Party became the first and only party to govern. It is the same administration that brought us the Great Leap Forward, the Cultural Revolution and Tiananmen Square. It resembles in almost every respect the ideological, totalitarian regimes that blighted the 20th century. It has adapted modern surveillance technology to enforce its goals.

Nothing has changed on that front, much as we have tried to imagine otherwise. China’s large-scale, officially sanctioned extrajudicial killings continue, despite the spirited attempt by the West to turn a blind eye. Its treatment of the Uighur minority might be described as a crude attempt at ethnic and religious cleansing.

These illiberal actions are explained away with weasel words like ‘isolated’, ‘ill-advised’, or ‘miscalculation’. In truth, they are the acts of a state driven by values very different to our own.

Neither can we fall back on the fiction that what happens within the borders of a sovereign country is none of our business, particularly when the country in question is actively enforcing its cultural and economic hegemony around the world.

Chinese embassies and consulates in Australia, as in much of the rest of the world, are sophisticated, well-staffed centres for propaganda and control. The hacking of university computers, with their naively trusting indifference to cybersecurity, becomes a conduit to steal research and keep a close watch on Chinese citizens studying abroad.

They engage in active propaganda through Chinese-funded institutions like the Confucius Institute, which have a prominent presence on Australian campuses and also operate through schools. China has been actively trying to bring small Pacific Island nations into its fold for several decades with soft loans and investment. These are now a strategic battleground, not just for competing national interests, but for competing values.

China’s defensive and offensive capability grows every day. In Australia, despite a solid investment programme under the centre-right Coalition government, no one imagines the country would be capable of defending itself from concerted attack.

In this unsettling era in geo-strategic politics, the Australian cognoscenti are staggeringly unprepared. Their moral compass is broken. Some even suggest that China would be our natural ally in the event of conflict with the US. Western civilisation, the cause around which Australians and New Zealanders rallied in two world wars, is no longer worth fighting for. Indeed, it is a cause to be fought against on the campuses of Australia’s leading universities, where attempts to establish a philanthropically funded course in Western civilisation have been stridently rebuffed.

‘Arms are not sufficient by themselves’, Winston Churchill told an American radio audience in 1938. ‘We must add to them the power of ideas… We need the swift gathering of forces to confront not only military but moral aggression.’

Appeals like that have long lost their power to rally a nation. The English-speaking people to whom Churchill referred hardly exist as a conscious force. Our weakness is on display.