Bolsonaro’s Brazil: where is the fascist regime?

So far there is little sign that Brazil is bringing back the 1930s. 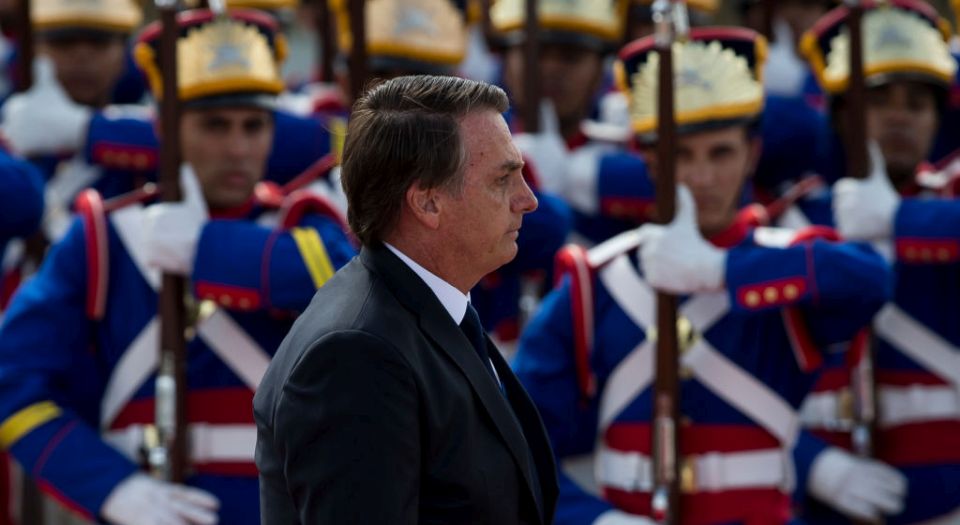 ‘With the blessing of God, the support of my family and the strength of the Brazilian people, I will work indefatigably so that Brazil can realise its destiny and become the great nation we all want.’ So declared Jair Bolsonaro at his inauguration as Brazil’s new president last week. His wife rather stole the show, though, not only by addressing the crowd, which itself was already a break from protocol, but by doing so in sign language.

If those who self-identify as left are to be believed, this – a vague, nationalist oratory, spliced with some anti-Workers’ Party invective and a signing first lady – was the beginning of fascism in Brazil. Or it might have been proto-fascism. Or maybe neo-fascism. Anyway, whatever the meaningless prefix, it was meant to be the beginning of something so bad that analogies with the rise of the Nazis during the 1930s continue to be drawn with deadening regularity.

Yet the reality of Bolsonaro’s presidency, albeit only a week old, seems already to be struggling to live up to the panting rhetoric. Where exactly is this fascist regime? Where are the appeals to imperial grandeur and military glory? Where are the bans on the main opposition parties? Where, indeed, are the policies promoting racial purity and some equivalent of Aryan supremacy? All of which had come to pass in some form by the time Hitler’s National Socialists had settled into power in Germany in 1933.

Instead, Bolsonaro has kicked off his Fourth Reich Redux not with ominous anti-Communist, anti-Jewish intent, but with a mix of social conservatism and economic liberalism, to useThe Economist’s rather sober characterisation.

So, on the Culture Wars side, he backed up his talk of freeing Brazilians from ‘political correctness’ by appointing Damares Alves, an evangelical pastor, as the new minister for women, family and human rights. She promptly promised girls could wear pink and boys blue. Extreme stuff, indeed. And on the economics side, he appointed Paulo Guedes, the University of Chicago-trained economist, as economy minister, tasking him with slashing state expenditure (especially through pensions cuts), simplifying a complex tax code, and generally pushing forward with deregulation in order supposedly to free up private enterprise. All of which amounts to a broadly free-market capitalist outlook, complemented by what is seen as a likely move against workers’ rights, in the shape of the abolition of work tribunals. So ‘neoliberal’ perhaps. But fascist? Not even close — especially if one remembers fascists tended to champion the state over ‘Jewish’ business interests and, especially, finance capital.

Then there’s the appointment as justice minister of Sergio Moro, the former judge who jailed ex-president and Workers’ Party leader Luiz Inacio Lula da Silva, as part of the anti-corruption ‘Carwash’ investigation. Straight away, Moro reiterated the main spurs for Bolsonaro’s election victory: ‘The end of impunity for corruption, the fight against organised crime and the reduction of violent crime.’ These, after all, were the chief reasons why Bolsonaro, as an outsider politician leading a hitherto insignificant party, the Social Liberal Party, picked up so much support. Not because he was some sort of Great Dictator, or the harbinger of the counterrevolution against the Bolshevik threat, but because many Brazilians from all classes were utterly fed up not just with the ruling Workers’ Party, but with the political establishment as a whole, riven, as has been exposed over the past few years, by large-scale corruption. And as Brazilians endured the exposure of the pocket-lining shenanigans of their representatives, their own lives seemed ever more exposed to a rising tide of crime and violence.

So the business elite and the middle classes, tired of the corruption of the Workers’ Party, and the seeming breakdown of law and order, turned to Bolsonaro. And they were joined by many poor, working-class voters, particularly in the urban parts of the south and southeast of Brazil. And they all did so because Bolsonaro, allied to the military, one of the few institutions commanding a modicum of popular respect, promised to stand above the rotten political fray, Bonaparte-like, and do what has to be done: tackle crime and violence, stem state-level corruption, and perhaps lift the economy out of the doldrums. It makes for an illiberal, authoritarian regime, certainly. And one in which Bolsonaro’s frequent promises to purge education of ‘Marxist garbage’, and place Christianity at the centre of the state, take on a hue every bit as intolerant as the political correctness they are pitched against. But it is not a fascist regime.

Even the composition of his ministry, a mix of technocrats, true believers and military men, and markedly free of established politicians, is more a response both to public disenchantment with the extant political class than it is some ideological putsch.

Of course, some pundits are still determined to see in his earliest actions ‘the swell of a regional “brown tide”’, a reference, one Nazi-hunter helpfully explains, to the ‘colour associated with European interwar fascism’. Others have seen Bolsonaro’s subordination of tribal rights to deforestation and agricultural development as the beginnings of ‘genocide’. And almost all Anglophone commentators never fail to remind us of some of Bolsonaro’s often unpleasant quips – proof, we’re told, of his misogyny, racism and antipathy to the LGBTQ+ community (despite the fact that almost all of Bolsonaro’s excited ribaldry dates back nearly 20 years to his time as an ignored, rather inconsequential political aspirant).

But what good does seeing fascism in any of this actually do? If anything, this constant invocation of the spectre of the 1930s, this persistent ‘discovery’ of the new Hitler, whether it is Erdogan, Trump or Bolsonaro, is a case of crying wolf. And like the fabled boy who wanted attention, today’s fascism criers make it difficult to see what a real fascist looks like.

Moreover, those who self-identify as ‘left’ today miss arguably the one crucial difference between fascism in the past and putative fascism today. In the early 20th century, it showed itself. A fascist was openly fascist. His ultra-nationalist statism, his almost spiritual militarism and his virulent hatred of the then revolutionary left, was not hidden behind a mainstream political facade of economic liberalism and social conservatism, to be discerned and deciphered by keen-eyed fash-spotters. Rather, it was an outlook worn with pride. So the fact that many think fascism today has to lurk behind the scenes, awaiting its opportunity to burst into the open, tells us something. It tells us that, as difficult as it is for today’s online International Brigaders to accept, fascism does not have a social base. Not in Trump’s America. Not in Brexit Britain. And not in Bolsonaro’s Brazil.