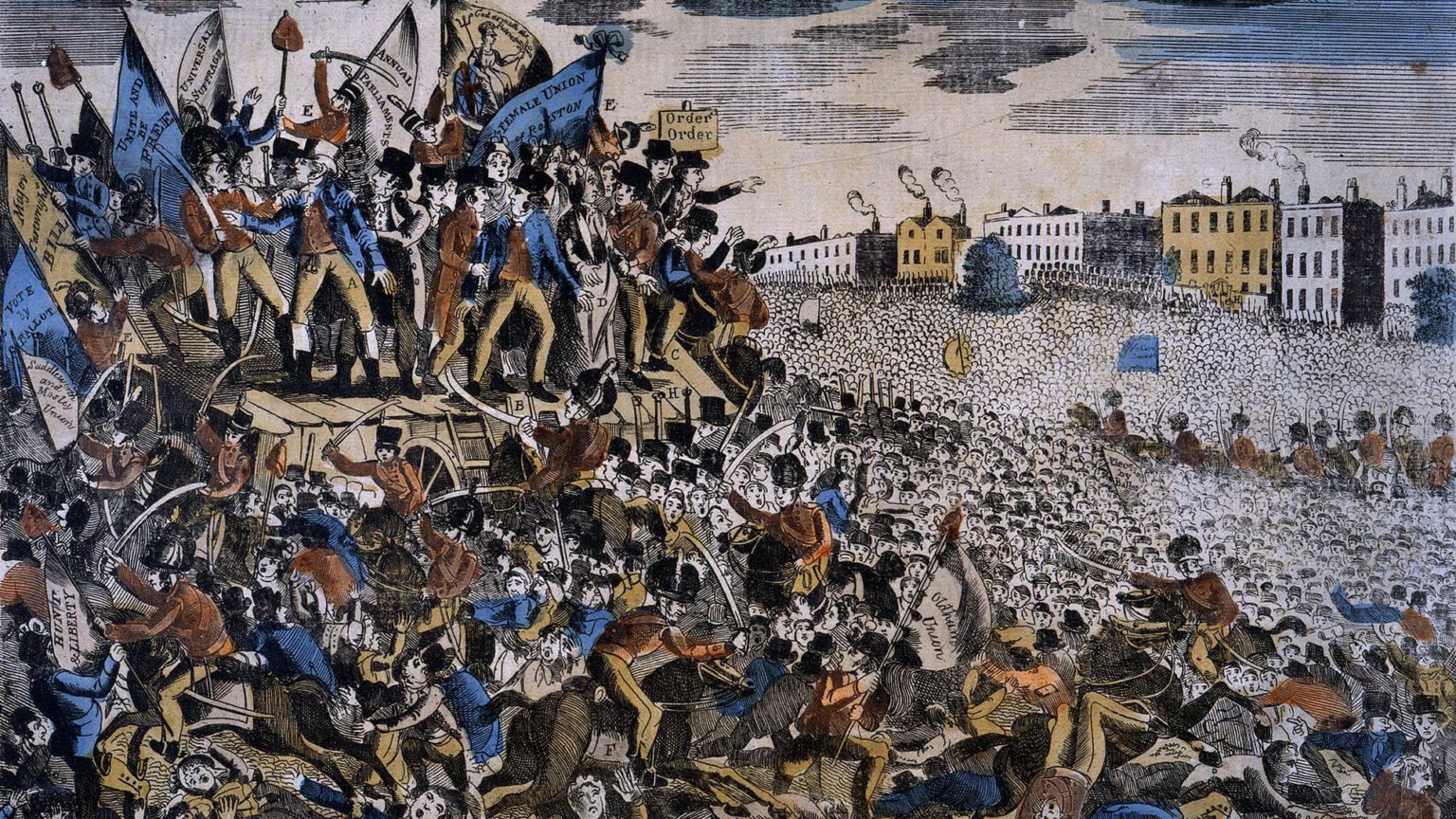 No, Corbyn is not heir to the Peterloo heroes

Leftists claim that democratic mantle, yet want to thwart Brexit.

Left-wing supporters of Labour leader Jeremy Corbyn are keen to claim the mantle of ‘the Peterloo martyrs’ – the pro-democracy demonstrators massacred by troops in Manchester 200 years ago, who are celebrated in director Mike Leigh’s new film.

Why then are those same Labour leftists determined to deny the democratic will of the millions who voted for Brexit? After all, the Brexit revolt is the biggest democratic uprising against the UK establishment in living memory, making Leave voters the true heirs to the Peterloo protesters of 1819.

Much of the media publicity for Leigh’s film Peterloo, released this week ahead of next year’s bicentenary, looks more like a Labour Party broadcast. Corbyn fan Maxine Peake, one of the movie’s stars best remembered by some as Twinkle in the sitcom Dinnerladies, has been cited as if she was Sylvia Pankhurst.

The actor solemnly warned the Guardian that the lesson of Peterloo is that ‘this could happen again’ soon because ‘we live in a police state’, as evidenced by the ‘extreme violence’ police are using against, er, northern anti-fracking protesters. Presumably reports of the cavalry charging Peterloo-style through those middle-class Lancashire lobbyists has been suppressed by the Tory press.

At September’s Labour Party conference in Liverpool, Corbyn himself declared that the Peterloo protesters had been massacred ‘by troops sent in by the Tories to suppress the struggle for democratic rights’, and that Labour would ‘honour the heroes of Peterloo by being true to their cause’. Then the Labour leader made a revealing observation. ‘The great English poet Percy Shelley wrote a poem about the massacre’, he said. ‘That was the origin of our slogan “For the Many Not the Few”.’

Students of English poetry might notice some subtle rewriting of literary history here. Shelley did indeed write a famous poem, The Masque of Anarchy, inspired by Peterloo. Its best-known lines call on the masses to…

‘Rise like lions after slumber
In unvanquishable number,
Shake your chains to earth like dew
Which in sleep had fallen on you –
Ye are many – they are few’

Corbyn’s Labour has rewritten Shelley’s last line to read ‘For the many, not the few’. Labour does not want to lead a democratic uprising of the unvanquishable masses. Instead its top-down promise is to act for the many – ‘on behalf of’ the downtrodden, as every self-righteous charity pledges today. It is less a call to arms, to ‘rise, like lions after slumber’, than advice to lie back and think of socialism, while the Labour leadership does whatever it decides is best for the rest of us.

Yet what Peterloo showed was how history is made by the mass of people fighting for change. That was how something approximating democracy was won in Britain. It had to be wrenched from the hands of a hostile ruling class, not handed down as a gift by benevolent governments.

The 60,000 men, women and children who gathered at St Peter’s Field in central Manchester on 16 August 1819 were demanding the most basic democratic right – the vote. The booming industrial city of Manchester still had no elected MPs to represent its teeming population in parliament, while rural ‘rotten boroughs’ sent MPs to Westminster via patronage and a handful of paid-for votes.

The brilliant account of Peterloo and its impact given in EP Thompson’s classic history The Making of the English Working Class (first published in 1963) remains well worth reading today. Thompson notes that, for all the propaganda about ‘the mob’, it was the organised, ordered strength of the new working classes that panicked the authorities. The violent assault on the peaceful protesters ordered by the Manchester magistrates was motivated by ‘the paranoia of class hatred’.

The worst of the attacks with horse and sabre, which left up to 18 unarmed demonstrators dead and hundreds injured, were led, not by the regular cavalry of the Hussars, but by the Yeomanry – the part-time troops drawn from the ranks of the local bourgeoisie. These gentleman stormtroopers, says Thompson, were ‘the Manchester manufacturers, merchants, publicans and shopkeepers on horseback’ and ‘there is no term for this [massacre] but class war’.

When leaders of the pro-democracy protest were subsequently arrested and dragged into court, The Times reported one of those Manchester magistrates informing them that, ‘Some of you reformers ought to be hanged, and some of you are sure to be hanged – the rope is already round your necks…’.

Whether or not the Tory government led by Lord Liverpool knew in advance of the plan to attack the Manchester rally remains a matter of dispute. What is certain is that the Liverpool regime took advantage of Peterloo to try to crush the burgeoning movement for democratic reform. It swiftly passed the repressive Six Acts, which cracked down on the right to assembly, increased penalties for ‘seditious libel’ – aka criticism of the authorities – and imposed a stamp tax on the radical press.

By the summer of 1820 many leading reformers were in jail – including charismatic figurehead Henry Hunt and the editor of the Manchester Observer, which had coined the name ‘Peter-loo’ as a scathing reference to the British military’s victory at the battle of Waterloo less than three years earlier. Thompson called it ‘the most sustained campaign of prosecutions in the courts in British history’. That of course was before the arrest of 10,000 striking miners during the strike of 1984/85.

The government’s class war against the spreading democracy protests was aided by the weakness of the movement’s own middle-class leaders. The vain, vacillating Hunt wasted the opportunity given by the nationwide wave of anger over Peterloo. When Hunt entered London 10 days after the massacre, The Times estimated he was met by crowds of 300,000 on the streets of the capital. Yet all Hunt could offer the enraged protesters was a policy of ‘passive resistance’ – essentially trying to take legal action against the perpetrators of Peterloo (in the same courts that were imprisoning reformers), and waiting ‘in patience’ for the opening of parliament, when he hoped the government would set up an official inquiry into the massacre which it had backed! Instead the government imposed the Six Acts, confirming the hard-won truth that, where democratic protests are concerned, cap-in-hand gets kick-in-teeth.

If Corbyn’s Labour leadership is the ‘heir’ to anybody from 1819, it looks like Henry Hunt and the ‘constitutionalist’ wing of the reform movement. Labour left leaders remain far more comfortable appealing to the courts to defend rights and calling for judge-led official inquiries than mixing with the revolting masses.

Despite the repression after Peterloo, the British proletariat was soon back at the forefront of the battle for democracy – demonstrating, rioting and forcing the reluctant establishment to pass three reform acts in the 19th century, each one extending the vote to a wider group of property-owning men, before universal suffrage was finally won in the 20th century.

Now we have the battle for Brexit and the ongoing elite campaign to thwart the verdict of 17.4million Leave voters – the biggest democratic revolt in memory. Yet leftist Remainers who want to claim the mantle of Peterloo seem keen to deny any link with Brexit.

‘Cut to Brexit’, director Leigh told the Independent. ‘Some boneheads might say “Hang on a minute, we’ve got the vote now and 52 per cent… [voted Leave]. But what role did the truth play in people’s decision to vote Brexit?’

Despite admitting that ‘intelligent working people’ voted Leave, Leigh’s message is really that we were all ‘boneheads’ duped by the lies of the Leave campaign. Which is pretty much what the elitists he claims to despise have been saying about the demos for the past 200 years.

(Speaking of ‘the truth’, Leigh says he met Cornish people voting Leave who seemed unaware that ‘the EU gives massive handouts to the farmers down there’. Like many Remainers, Leigh seems blissfully unaware that it is the UK that ‘gives massive handouts’ to the EU, as the second biggest net contributor. The Eurocrats then recycle some of that money back to Britain as they and their rules see fit. Thanks, but we’re surely quite capable of spending our own money.)

As for Ms Peake’s warnings about a repeat of Peterloo in our current ‘police state’ — we might recall that, when Theresa May called a snap General Election last year, and many expected the Tories to win comfortably, Peake told the Guardian that we needed ‘a coup’ to install a Corbyn government and override the Tory voters. As a former member of the Communist Party it seems that our Maxine, like many leftists from that Stalinist tradition, is all for democracy when it delivers the ‘right’ result.

The real ‘lesson of Peterloo’ was far better captured by left-wing journalist John Harris, writing in the Guardian earlier this week. It is that ‘this country’s journey into democracy was a product of the wisdom of crowds. There, not in ministries and mansions, is where social progress always originates, and in times as uncertain as ours, we would do well to remember it.’

Well said. Harris might also do well to remind his more Remainiac Guardian colleagues of the wisdom of crowds. But then, what should we expect from a newspaper founded in the aftermath of Peterloo as a moderate advocate of reform and opponent of radicalism, which paid the state’s hated stamp tax and was branded by the working-class Manchester and Salford Advertiser as ‘the foul prostitute and dirty parasite of the worst portion of the mill-owners’?

Which brings us, finally, to press freedom – a key demand and precious tool of the pro-democracy movement, and the first thing the Tory regime sought to suppress after Peterloo. Two hundred years later, the political party determined to shackle the press with tighter state-backed regulation is – Labour. Despite his ‘legacy of Peterloo’ speech at the Liverpool conference, Jeremy Corbyn might have more in common with the legacy of Lord Liverpool than he cares to admit.