The end of the West?

Trump is exposing the irrelevance of Cold War institutions like the G7. 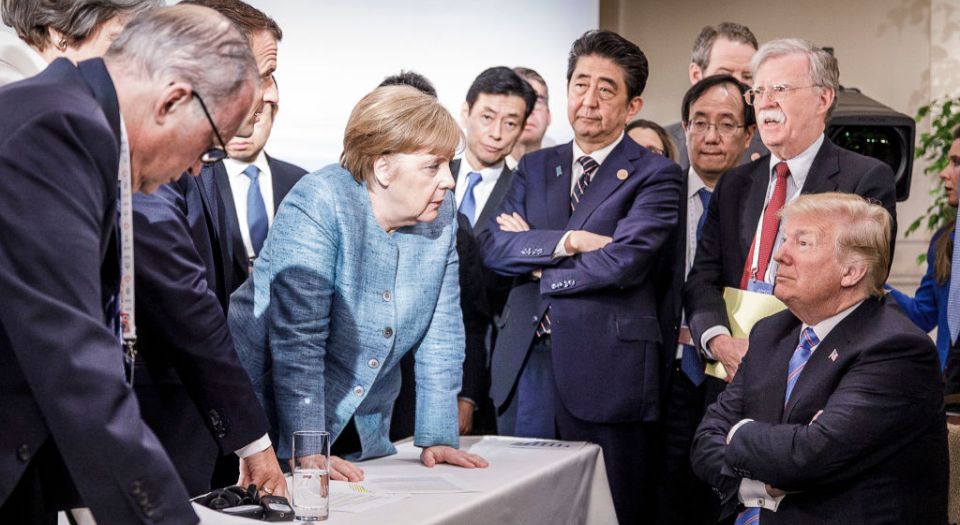 Seeing Donald Trump as the cause of the woes of the West, the president who has thoughtlessly broken with the right way of doing things, dispensing with protocol and breaking with rules-based international law, has been a long-standing trope in the mainstream response to the Trump presidency. The reaction to what was an unusually tumultuous Group of Seven (G7) summit this weekend is a case in point. According to New York magazine, Trump blew up the G7 summit. His after-the-fact tweeted refusal to sign the typically bland G7 joint communique has left ‘the West in disarray’, proclaimed the Financial Times. And, just to add to the sense of catastrophe, the Telegraph reckoned ‘Trump’s tactics suggest the West may be history’.

There is little doubt Trump has enlivened what is usually an astoundingly unremarkable annual affair, where the leaders of seven of the world’s economically most powerful democracies – which is why China continues to be excluded – get together for an informal chinwag before releasing a forgettable collective statement of non-intent. He kicked it off by suggesting G7 members readmit Russia, a member since 1997 until its expulsion in 2014 when it annexed Crimea. He then turned up late, refused to relax US import tariffs, and, for his coup de gracelessness, he called Canadian president, Justin Trudeau, ‘weak and dishonest’. Way to go, Donald. But the end of the West? The destruction of the world order?

Such claims are clearly overstated. But Trump did do something. Thanks, in no small part to his non-political-establishment background, he refused to go along with the notion of the G7, as if it is self-evident that its seven members ought to act in concert. And in doing so, he showed that beyond capital flows there is now very little that binds the US to its postwar allies. Trump did not create this situation. But he is exposing it. He is revealing the ideological unravelling of the postwar world order. He is showing that the political glue has deteriorated. He is unveiling the difficulty of sustaining an alliance between nations that traditionally rested, in residual form, on Cold War antagonisms.

And it is not the first time Trump has done this. NATO, founded in 1949, is in essence an anti-Communist protectorate that has been flailing around for a purpose, not to mention expanding ever eastwards, since the fall of the Berlin Wall. Little wonder Trump, looking at it in terms solely of cost/benefits, could barely see the point, and called it obsolete.

The G7 is a later institution, beginning as an informal gathering between France, the US, West Germany, Britain and Japan in the library of the Nixon White House in 1973, before being formally launched in 1975, with Italy included to make it a G6. It was born, then, at a moment when the postwar boom had started to bust, amid the oil crisis, rapid inflation and rising unemployment. This crisis, in effect, of capitalism was experienced simultaneously as an ideological crisis because of the extent to which the legitimacy of Western elites’ rule was bound up with the supposed economic superiority of the (relatively) free market to the state socialism of the Eastern Bloc. Recession therefore seemed to pose an almost existential crisis for the postwar West. You can hear this sense of threat in Helmut Schmidt’s comments to Henry Kissinger in the run-up to the first official G6 meeting. ‘The West is undergoing the greatest political crisis since the Second World War’, he said. ‘The functioning of the democratic industrial nations is at stake.’

The G6 was born, then, of Western nations’ desperation to ensure that their economic system outperformed that of the East, because if it did not then they would lose the central source – economic success – of the West’s ideological superiority to Communism. This is why Kissinger stressed the non-economic necessity of the G6, namely the need to address ‘the erosion of people’s confidence in their society’s future and the resulting loss of faith in democratic means’. And it is why Die Zeit heralded the conclusion of the first summit as the forging of ‘a new spirit – a spirit of cooperation and confidence stemming from a deeper understanding of our common destiny and our joint conviction that free people can master their future’.

It is precisely that absence of the Communist adversary, the existential threat that forced its members together, which slackens the G7 today. The meetings lack urgency, the organisation lacks purpose, and the national leaders lack a political ground for solidarity. Which is not to say that the global economy is flourishing in the postwar West – on the contrary, it is flourishing to an extent elsewhere, in China and India. Rather, it is to say that the economic problems of the West, in the absence of that looming red, menacing alternative, are no longer experienced as an ideological crisis in the same way. In fact, the problems of the economy are experienced almost non-politically, as technical and pragmatic problems (or they are turned into environmental virtue), and, therefore, as potentially susceptible to national solutions, be it through tariffs on steel imports or other forms of protectionism. And that is what Trump has effectively and clumsily revealed: the ideological, political point of a multilateral approach to economic problems is vanishing.

This doesn’t just apply to the G7 or NATO. It applies to all those postwar forms of multilateral action, including the United Nations. All are being undone by the want of the common enemy, an existential threat, that once lent them their collective purpose. This, in part, explains the wilful creation of Vladimir Putin’s Russia as something akin to its Soviet predecessor. Too many in the West want Putin’s Russia to be the existential threat that it clearly is not. They want it to re-cohere the West by being the object to which the West is opposed.

Trump’s role in all this is not proactive, so much as reactive. Unencumbered by the windowless perspective of the political class, for whom institutions such as NATO or the G7 have an almost forever quality, Trump sees them largely for what they now are: if not obsolete, then certainly not working. So, while Trump is not the cause of this historical shift, it is happening. The strands that once pulled together Western national elites in the postwar world are now unspooling. And it is unlikely they can ever be wound taut and tight through these relics of the Cold War era again.