The Lords and the left unite to fight democracy 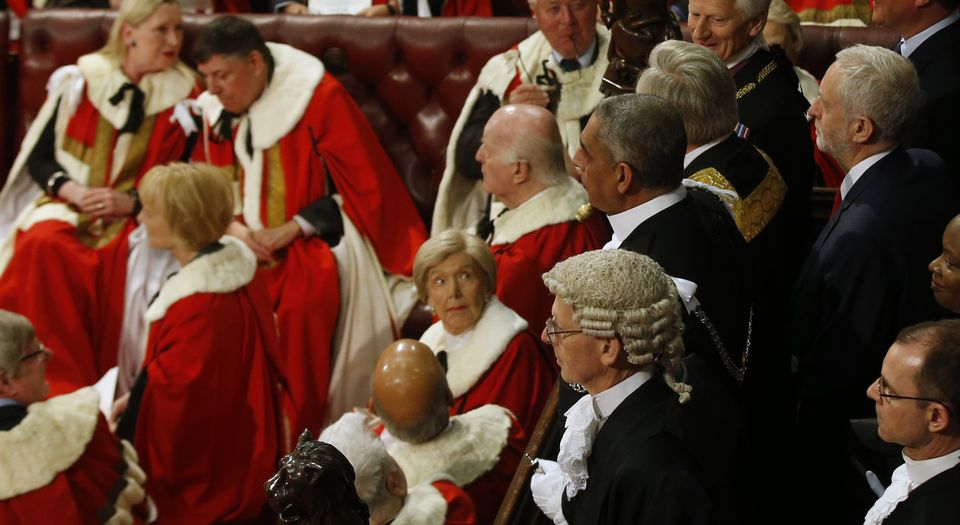 ‘Men will never be free until the last king is strangled with the entrails of the last priest.’ So, allegedly, wrote 18th century Enlightenment philosopher Denis Diderot. With the subsequent political tumult of the 1789 French Revolution, Diderot’s supposed words became popularised as ‘Hang the last aristocrat with the guts of the last priest!’. The people’s enemies were the tyrannical Ancien Régime and its apologists in the church hierarchy.

More than 200 years later, in the struggle over Brexit, we are faced with different enemies seeking to reverse the democratic revolt by 17.4million Leave voters. Members of the House of Lords leading the reactionary backlash against Brexit are not old-fashioned aristocrats, but an unelected club of former, failed and sometimes fraudulent politicians. And the Remainer elites’ loud cheerleaders are to be found, not among church traditionalists, but in Jeremy Corbyn’s Labour Party and on the left.

It seems we need a new version of that old revolutionary slogan. Perhaps something like ‘Hang the last Remainer Lord with the guts of the last Brexit-betraying leftie’! Though, in these more temperate times, we should only wish to see them throttled in a figurative, political sense, of course.

This week the House of Lords inflicted yet more defeats on the Tory government over its EU Withdrawal Bill. By 335 votes to 294, peers passed an amendment which would give parliament the power to stop the UK leaving the EU without a deal, or force prime minister Theresa May (or her successor) to return to the negotiating table if they didn’t like the exit agreement.

If upheld by MPs in the House of Commons, this amendment would effectively tie the government’s hands. It could mean the UK only leaves the EU on terms acceptable to Brussels and the hardcore anti-Brexiteers back home. That would mean Remain by another name.

Of course, the lords insist they are only defending parliamentary democracy and sovereignty against government diktat. But this is a mockery of democracy. They never seemed concerned about UK parliamentary sovereignty while imposed EU rules rode roughshod over it for 40 years. Yet suddenly they want to defend it against the demand for popular democracy and sovereignty expressed in the EU referendum result. Those 335 unelected, unaccountable, ermined lords have appointed themselves as champions of democracy against the ‘tyranny’ of 17.4million Leave voters.

How times change. After the anti-Brexit votes, the lords came under fierce attack from the sort of conservative politicians and newspapers that might once have been expected to defend the traditions of parliament’s upper house. Tory trade secretary Liam Fox warned peers were trying to ‘thwart the will of the British people’; the Sun called the Lords ‘a cancer eating away at our democracy’; the Daily Mail dubbed it ‘a house of unelected wreckers’; former UKIP leader Nigel Farage echoed spiked’s call for a referendum on abolishing the House of Lords.

Yet on the other side, the democracy-subverting Lords were praised by leaders of the Labour Party and the left who always claim to be supporters of radical change. Labour’s (anti-)Brexit spokesman, Keir Starmer, said the vote marked a ‘hugely significant moment’ in the fight to stop the UK leaving the EU without a deal acceptable to Remainers – more significant, apparently, than the small matter of the referendum vote to do just that.

Leading left-liberal voice the Guardian, a longstanding advocate of radical Lords’ reform, made space for an article by arch-Remainer Lord Bilimoria (no doubt we must ensure that such disenfranchised minorities as peers of the realm have a voice). Looking down from the moral high ground, his lordship informed us that, by trying to stop Brexit, the Lords is simply doing what’s best for the British people, whether we know/like it or not: ‘Rather than being at war with the nation, we are its very custodians.’ Or Guardians, perhaps.

Further left, a senior writer at New Statesman magazine, Labour’s house journal, praised the House of Lords as ‘the left’s new best friend’. Even fanatical Corbynista website the Canary suggested that Labour supporters ‘wishing to remain in the EU may find unlikely heroes in their unelected peers’. With ‘best friends’ and ‘heroes’ like the Lords, who needs enemies?

In the battle over Brexit, the Lords and the Labour-supporting left have united to fight democracy. In this unholy alliance against the people, the Lords at least is only doing its job. But the left has betrayed all it claims to stand for.

The role of the upper house in Britain’s modern political history has been to restrain democratic reform and guard the state against the danger of ‘too much’ democracy.

Over the past two centuries of political struggle, the balance of power has shifted away from the Lords towards a House of Commons, elected by an increasingly wide franchise; universal adult suffrage was finally achieved in 1929. Seventy years later, when Tony Blair’s New Labour government removed almost all hereditary peers from parliament, it surely should have sounded the death knell for the unaccountable power of peers.

Yet today, the Lords, leftover rubbish of the Middle Ages, is back at the forefront of the battle over democracy and sovereignty. With more than 800 unelected members (200 more than before the hereditaries were ousted), the House of Lords is now the largest chamber in any democracy – albeit one without a shred of democratic legitimacy. The fact that the misnamed Liberal Democrats, reduced to a rump of a dozen elected MPs, now has more than a hundred appointed peers swanning about in the Lords captures the unaccountable essence of that den of cronies.

Abolishing the House of Lords remains the unfinished business of Britain’s democratic revolution. That was why the left, from the Levellers of the 17th century to the Chartists of the 19th, always despised the anti-democratic institution that Thomas Paine described as the ‘remains of aristocratic tyranny’. As late as the early 1980s, under left-wing leader Michael Foot, the Labour Party backed abolition. Even in 2007, when the House of Commons debated various options for Lords reform, a sizeable minority of 163 MPs voted to do away with it altogether.

Yet now, Labour praises the Remainer elites in the Lords as champions of democracy, while the left hails the revolting peers as its ‘new best friends’ and ‘unlikely heroes’. There could hardly be a more telling illustration of the left’s historic shift away from the demos, the people, towards the unaccountable institutions of the state and the EU. Or of Labour’s abandonment of traditional working-class Leave voters in the rush of the ‘People’s Party’ to become the party of the metropolitan Remainer middle classes.

The Lords and its radical fan club might claim to be acting in defence of parliamentary sovereignty. Yet what does representative democracy really mean when no national political party represents the 52 per cent who voted Leave, and every party in parliament – bar Northern Ireland’s small and much-maligned Democratic Unionists – is led by Remainers?

Those who think of ourselves as left democrats have always defended parliamentary democracy against infringement by unaccountable powers, be that a king, the courts or the European Commission. But allow a distorted version of parliamentary sovereignty to be used as an elitist garrotte, to throttle the popular democratic demand for Brexit? Hang that.