Germany’s Social Democrats have a new leader, but no new ideas. 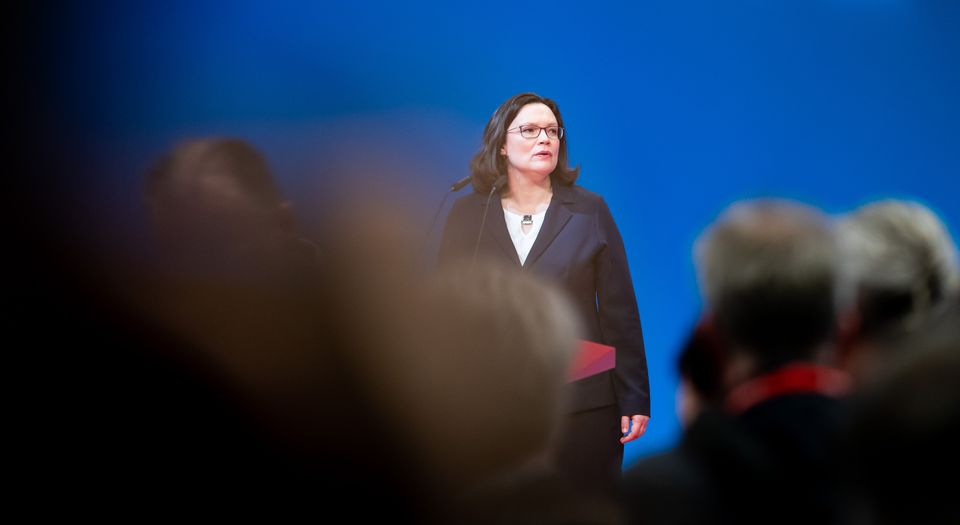 Delegates of Germany’s Social Democratic Party (SPD) have elected their new party leader, Andrea Nahles, with a meagre 66.35 per cent per cent of the votes, far lower than the party leadership had expected. ‘A false start’, was the verdict of Wirtschaftswoche magazine – an understatement, given that Nahles has been described as the SPD’s ‘last hope’. After the SPD’s historic defeat at the election in September, its worst since the Second World War, its approval ratings continue to fall, and currently stand at around 18 per cent. Its recent congress, at which Nahles was elected, was presented as the beginning of the party’s renewal. But it ended up looking more like another step towards the SPD’s final demise.

Nahles is neither popular nor a new face in German politics. She was labour minister in the last grand coalition government with Angela Merkel’s CDU, and she played a major role in setting up the new CDU-SPD coalition. As the leader of the SPD’s parliamentary faction, she has been closely associated with the party’s decline. In the past month, she became the subject of countless jokes, following her embarrassing, childish attempts to set herself apart from Merkel by appearing rebellious, telling the press the SPD would from hereon ‘smack [the CDU] in the face’.

That so many SPD delegates refused to follow the party leadership’s line and vote for Nahles came as a shock to some. Instead, many voted for Simone Lange, mayor of Flensburg, one of Germany’s smaller cities. It seems the politics of delusion being pursued by the SPD’s leadership is no longer working even within party ranks. A year ago, Martin Schulz was built up as the party’s new saviour, and was given 100 per cent of the delegates’ votes, only for him to lead the party into its election disaster.

Nahles’ speech at the congress made the SPD’s dearth of vision clear. Most of it was spent talking about herself – her working-class background and her experiences as a woman. The SPD, she said, had given her dreams, thoughts and desires a home. She thanked her family and her party for helping her come so far. But such personal platitudes won’t wash with voters. Worse still, she claimed to be breaking the glass ceiling, as the SPD’s first female leader, seemingly forgetting that she was speaking in a country in which a woman has just begun her fourth term as chancellor.

The rest of the speech was patronising and evasive. She called for solidarity with the victims of our ‘globalised, neoliberal and turbo-digitalised age’, and said populists – like the anti-immigration Alternative fur Deutschland, which ate away at SPD support at the last election – were exploiting the weakest in German society. But she made no attempt to explain why the SPD had lost so many votes to these so-called populists. In fact, Marine Le Pen and Geert Wilders were mentioned more than the AfD. Nahles even attacked Hungary’s Viktor Orbán and Poland’s Jaroslaw Kaczynski. Just as Schulz would constantly attack Donald Trump, Nahles seems far more comfortable talking about the shortcomings of other countries’ governments and politicians, rather than the shortcomings of the SPD.

‘Electing a woman to lead the Social Democrats for the first time could certainly have been a more rousing occasion’, one sympathetic commentator wrote of Nahles’ congress speech. But the SPD doesn’t want to rouse people; it only wants to be elected by them. And it deserves all the disappointment it is bound to get.