The West’s virtue-bombing of Syria is a disastrous mistake

Our governments have made themselves the allies of ISIS. 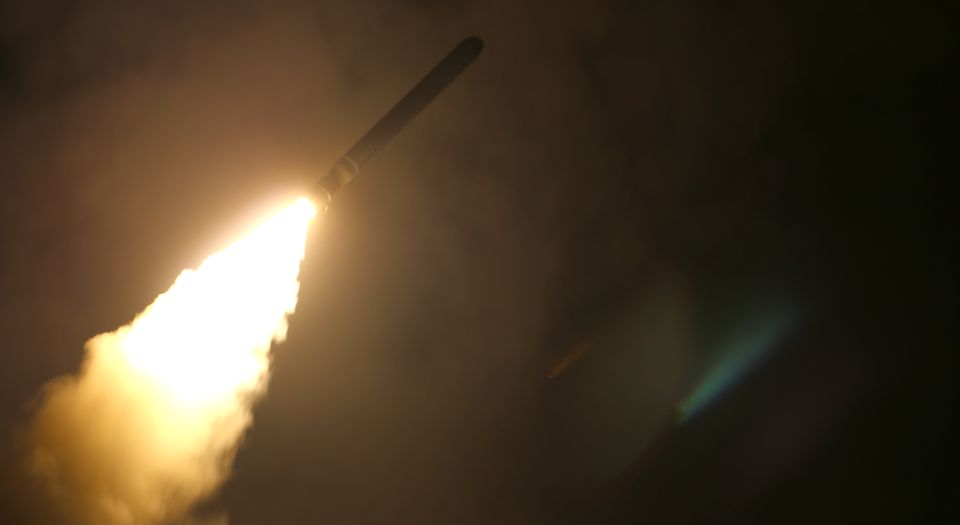 We’ve had virtue-signalling – now we have virtue-bombing. A military strike designed not to defeat an enemy, or take territory, or achieve any kind of tangible political goal, but rather to make a showy statement about our presumed moral decency. A violent tweet. The military wing of gesture politics. The pursuit of PR by other means. And if virtue-signalling is annoying and often authoritarian, with its reduction of every debate to a showdown between the self-obsessed and its green-lighting of Twittermobs against those who dissent from that day’s virtuous orthodoxy, virtue-bombing is positively lethal. Its treatment of complex conflicts as matters of good and evil, as black-and-white tableaux in which there are evildoers and evil-sufferers and nothing in between, infantilises international affairs and paves the way for action driven more by the virtuous kneejerk than by clear, cool, realpolitik considerations.

The American, British and French assault on targets in Damascus at the weekend is an example of virtue-bombing. spiked is not a pacifist publication, but it is very clear to us that this is an act of war unanchored from geopolitical reason and ungoverned by the very basics of political judgement. This joint intervention will do nothing to help the people of Syria and in fact could make their terrible lot worse. As even some in the pro-bombing camp recognise, taking out a few alleged chemical-weapons facilities will not stem the bloodshed in a war in which the vast majority of people are killed by conventional means. And as they occasionally confess, weakening one alleged part of the Assad regime’s military apparatus will do nothing to dent the Assad-Russia-Iran alliance to win back Syrian territory from the various opposition forces, some of whom are disturbingly backward movements given to beheading dissidents, obliterating women’s liberty, and enforcing 7th-century diktats. In fact it could end up strengthening that alliance, through escalating the ante so that this alliance is now not only concerned with defending Assad’s authority over Syria, but also with defending its own global and domestic reputations against a new militaristic alliance of Western powers.

And strikingly, the virtue-bombing will also bring no benefit to its own authors. It is likely to be detrimental to their geopolitical and domestic interests. The first thing it will do is draw Britain and the US into a needless, further heated confrontation with Russia, risking paralysis, tension and even conflict between the West and the East of the kind we haven’t seen for many years. That some in the West will get to wrap themselves in the comfort blanket of the old Cold War’s binary global moralism – which seems seriously to be one of the aims of our political elites’ insatiable urge to bait the Russian bear in recent years – is likely to prove a short-lived high in a world that will become more fissured and tense as a consequence of the foreign-policy establishment’s reckless global behaviour. And the second thing it will do is boost the very species of Islamist extremism that has in recent years declared existential war upon the West and which in Europe has massacred almost 500 people in the past five years alone. Such groups, rife in the vortex that Syria has become, will benefit directly from the Western alliance’s actions.

This is perhaps the most shocking element of the strikes on Damascus: they make Western powers and their media cheerleaders objectively into the allies of some of the darkest, foulest movements at work in the world today. From ISIS to the Army of Islam to al-Nusra (now Jabhat Fateh al-Sham), the movements lined up against Assad are far from the ‘rebels’ some Western media coverage would have us believe. They are ruthless religious extremists whose victory in Syria would make the Assad regime, with all its authoritarianism and anti-democracy, look like a pleasant memory in comparison. These groups have enforced terrible rule in places like Raqqa, Ghouta and East Aleppo and have committed barbarous crimes against civilians, including, it is widely suspected, with their own use of chemical weapons. These outfits will welcome the Western alliance’s actions and will see the West’s heaped pressure on Assad as a green light to their own violent ideological push against the regime. These air strikes are in essence a military wing of Islamist extremism, providing military cover and even moral rejuvenation to an anti-Assad movement that has virtually no positive qualities.

Of course this isn’t the first time Western governments have taken military or diplomatic action that has either created the space for the rise of Islamist militancy or has directly benefited such militancy. From Afghanistan in the 1980s to Bosnia in the 1990s, where Western arms went to certain mujahideen forces fighting against Russia or the Serbs respectively, and from the military attacks on Iraq in 2003 and Libya in 2011 to the various injections of money and weapons into the Syrian vortex over the past eight years, which allowed for the growth and spread of barbaric new movements in the Middle East and North Africa, Western interventionism has continually exacerbated Islamist extremism. Our leaders wring their hands over the rise of Islamist militancy in Western capitals while taking foreign action that effectively turns whole swathes of the world into nurseries of such militancy. Now they effectively lend their bombs to the cause of further isolating Assad and by extension strengthening the resolve of the Islamist opposition, of ideological groups that would massacre Western civilians given half the chance, and in fact have done so.

Consider the impact that America’s UN ambassador Nikki Haley will make with her comments saying the US is ‘locked and loaded’ to attack Assad again if there is another chemical attack and that this next Western strike would signify that his time was up. She is doing the bidding of ISIS and the others. She is signalling to them that Assad’s days are numbered. She is saying, ‘He’s on his way out, so push a little harder’. And she is positively incentivising the use of chemical weapons by Islamist groups. Because they now know that if there is one such chemical attack, then Assad’s regime will be bombed again and the West will declare him illegitimate, finished, over. And they also know from the events of recent days that the origins of such a chemical attack would not be thoroughly investigated before Western military action against Assad was taken. What do they have to lose? With one statement, Haley makes the Syrian war bloodier, Syrians’ lives harder, the Islamist insurgency cockier. This is the danger, the horror, of virtue-signalling in warzones.

How can the West so nakedly take action that will harm itself, harm Syrians and harm geopolitics, and benefit nobody but the profoundly ugly movements of wartorn Syria and beyond? Because its driver is not thought or analysis, but the imperative of the moralistic display, of the loud, explosive demonstration of presumed virtue. Such an almost therapeutic approach to global affairs doesn’t only make it harder to think in rational geopolitical terms. It actually discourages such use of reason. Witness the front pages of newspapers telling us this is a war on ‘evil’, or Western politicians’ use of language like ‘animals’ to describe Assad, or the way anybody who suggests that the Syrian theatre is a complex one in which there are no good guys and possibly some worse guys than Assad can be shamed as Assad apologists and essentially threatened with McCarthyite expulsion from public life, as spiked contributor Tara McCormack and other academics shamefully were by The Times on Saturday: all of this communicates the message that we mustn’t think about Syria, we must just feel. To think, to reason, is to make yourself suspect. Join the orgy of virtue or else. A combination of military moralism and intellectual philistinism is marshalled both to virtue-signal abroad and silence difficult discussion at home.

This is one important thing that those of us who are genuinely concerned for the people of Syria can do: challenge this intellectually stifled climate, insist on depth in international policy discussions, and call for a foreign policy governed by the principle of, ‘First, do no harm’. Right now, our leaders are doing enormous harm to Syria and its people. They seem to think their need to feel temporarily righteous should take precedence over thinking clearly about the impact their action is likely to have on life and limb and the future in Syria. Our role is to tell them this isn’t so, and never should be in relation to any part of the world.