A theatre revival of the 1976 film shines a light on our mad media. 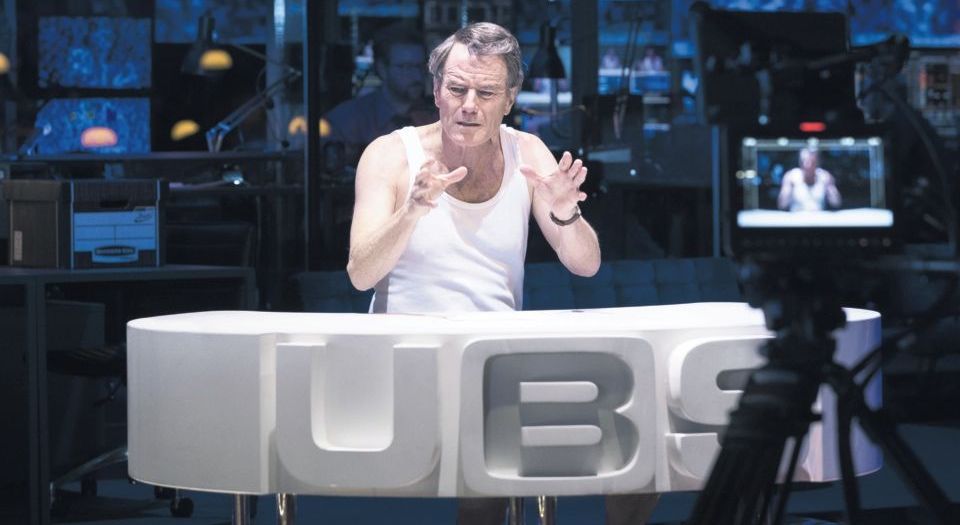 In this era of clickbait and fake news, the National Theatre’s decision to adapt Network, the scathing satire of what a news network will do for ratings, would seem the perfect way to explore the state of the modern media. It works, but not fully. Where the 1976 film version was eerily prophetic of the theatrics of television news, its depiction of the audience as inherently passive doesn’t ring true in the digital age. With so much choice for media-users these days, a figure like Howard Beale – the ‘mad prophet of the airwaves’ – could not exist in the same way.

Recently fluctuating between big hits and questionable flops, the National Theatre has a surefire hit in its casting of Bryan Cranston, in his London theatre debut, as Beale. He was played by Peter Finch in the film. Closely adapting Sidney Lumet’s movie, Network tells the story of news anchor Beale and his announcement that he will kill himself on air after being fired. When network executive Diana Christensen (Faye Dunaway in the movie, Michelle Dockery in the play) realises that his unscripted rants are winning the struggling network more publicity and ratings, Beale is kept on air and exploited as he descends further into madness.

Though maintaining the 1970s setting, the play also uses numerous screens and cameras to broadcast live images of the play itself, to hint at the more recent trend of media overload. Retro clothing and 70s pop-culture references sit anachronistically alongside modern news graphics and mobile-phone footage. Director Ivo van Hove argues that while the original film was intended as a satire, many of its most outrageous and nightmarish elements have become reality in today’s media. He now sees the story as one of tragedy. This interpretation carries right through to the ending, which is far more emotionally resonant than the self-consciously blunt climax of the film.

Paddy Chayefsky’s extraordinary screenplay for the movie is adapted almost word-for-word for the play by Lee Hall. The screenplay was most prophetic in its prediction of the move away from ‘hard news’ to more editorialised comment, most notably in cable news. There was a new sensationalism and theatrics in supposedly objective TV news, which Chayefsky saw as the inevitable outcome of a bloody battle to maintain ratings. It’s not hard to see the spirit of Beale in the ranting-cum-preaching style of Fox News anchors.

Having established himself as an acting heavyweight with Breaking Bad, Cranston has balanced questionable blockbusters like Godzilla and Power Rangers with demanding theatre roles such as his Tony-winning performance as Lyndon B Johnson in All the Way. He brilliantly inhabits Beale’s demented mind. His performance is made more demanding by his having to act for both the close-up cameras and the back of the stalls. Indeed, his performance is so demanding that the play is only being shown in repertory for a few days a week.

While we might recognise Beale in various contemporary broadcasters – although the ability of any one of them to become a Beale-like ‘mad prophet’ across the airwaves is limited by the fragmentation of the media – we no longer recognise ourselves in Network, in its satire of a passive audience. This phenomenon has never been experienced by younger generations. Even before the internet properly arrived, the introduction of vox pops meant the public was increasingly being put into the news. Public reaction to public events became news in itself: consider the huge response to the death of Princess Diana. And the incorporation of the public into news stories has grown in the digital age, with traditional news now regularly featuring ordinary people’s tweets and viral videos.

The digital age has also continued the mission of cable channels to empower us, or perhaps overwhelm us, with choice. Someone like Beale can no longer dominate the viewing public, because we no longer watch TV simultaneously.

Chayefsky’s script is so densely layered, however, that much of its prophetic bite goes beyond the world of television. The character of Arthur Jensen, chairman of the corporation that owns the network, sermonises about globalism destroying national identities after Beale criticises the company for making a deal with Saudi Arabia. Darkly humorous, this production of Network still has insights into the media as it was, as it is, and what it might become.

Network is at the Lyttelton Theatre until 24 March.