Jacob Rees-Mogg and the rise of the new intolerance

The spat in Bristol exposed the dangers of self-esteem censorship. 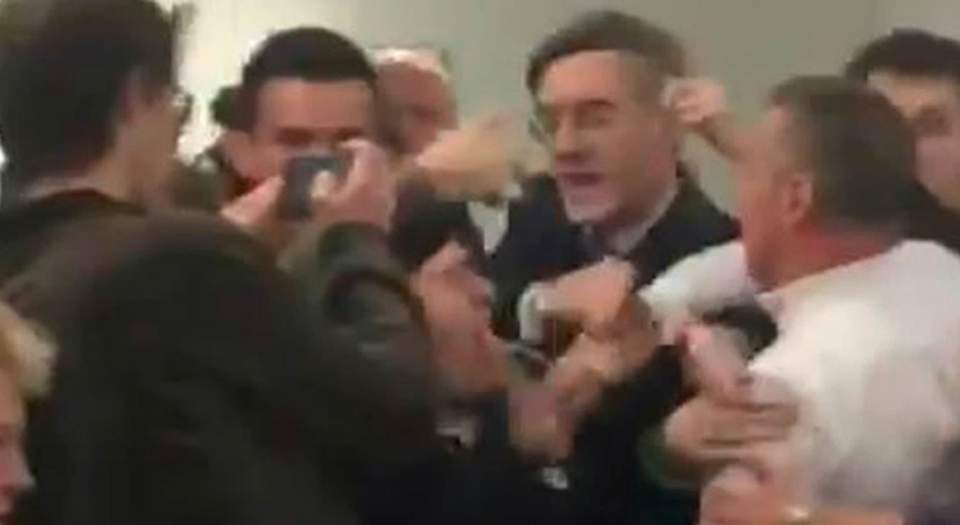 It’s hard to know which side is worse in the spat over Jacob Rees-Mogg’s appearance at the University of the West of England on Friday evening: the infantile masked anti-fascists who removed the silver spoons from their mouths for five minutes so that they could holler ‘fascist!’ and ‘racist!’ at Rees-Mogg, or the right-wingers in the Tory Party and certain sections of the media who have hysterically talked up this tiny group of middle-class muppets as a mortal threat to the entire history of British liberty.

Some of the latter have even cheered Theresa May’s proposed new law against the ‘intimidation’ of politicians – a potentially disastrous and authoritarian diktat that could seriously hamper the right to protest – as a welcome measure for dealing with these sorts of fools who try to drown out MPs. So students seek to silence Tories they hate, while Tories seek to silence protesters they fear – it’s a battle of the ‘snowflakes’.

On one side we have student ‘radicals’ – can we please reclaim the word radical from these Home Counties Corbynistas? – who are so historically illiterate that they will scream ‘fascist’ at someone who clearly isn’t a fascist, and who are so entitled, so socialised into the censorious mindset, that they think they have the right to glide through life without ever having to encounter an idea they disagree with.

And on the other side, we have… well, pretty much the same. Historical illiterates (a Daily Mail writer likened the interrupters of Rees-Mogg to fascists), who likewise think restricting the right to speak is the solution to thoughts or agitation they don’t like. Witness the suggestions that we must now rethink the right of people to protest against, or ‘intimidate’, those who are in or who seek public office.

You couldn’t have asked for a better snapshot of the narcissism of small differences. Of the fact that the shrillness of the exchanges in today’s Culture Wars is often a disguise for the fact that both sides share important things in common: a hyper-sensitivity to criticism; an instinct to write off their opponents in historically inaccurate, instantly blackening terms, whether ‘fascist’ or ‘Cultural Marxist’; and a desire to restrict speech they find offensive, dangerous, or aggressive.

It often feels like you couldn’t fit so much as a cigarette paper between the cries of the purple-haired Safe Spacer who wants to forcefield students from speech that might damage their self-esteem and the outlook of the grey-haired right-winger who wants to guard society against ‘radical’ ideas that might threaten security or stability. Both are in the business of silencing the difficult; both are motored by a cloying victim mentality that leads them, inexorably, to embrace censorship over discussion.

Indeed, the most striking thing about the agitators against Rees-Mogg and the right-wingers who are now even more keen on May’s law against the intimidation of politicians is that they are both concerned with creating ‘Safe Spaces’. So-called campus radicals want controversy-free zones in which no one may utter the words ‘Trans women are not women’ – a 21st-century blasphemy, and also the truth – and other things that might make them feel ‘unsafe’. And right-wingers alarmed by the sight of protesters or just shit-talkers, especially on Twitter, want to make the internet and campuses and public life in general permanently ‘safe’ for the political class. Which too often means ‘safe’ from protest, safe from insult, safe from strong criticism. Things which, I’m afraid to say, politicians should never be safe from.

The stand-off over UWE confirms that we have a younger generation that thinks freedom of speech is dangerous and an older generation who pay only lip service to freedom of speech. Politicians, journalists and others have recognised that there is a terrible, illiberal problem on campus, but they are incapable of challenging it because when push comes to shove – as it did literally with Rees-Mogg – their commitment to liberty also proves wanting.

So let’s get a few things straight. First, freedom of speech is the most important freedom there is. It is the freedom upon which all other freedoms are based, upon which democracy becomes possible, through which the individual becomes autonomous, a full and morally responsible adult. Because unless we can speak for ourselves and think for ourselves and judge for ourselves, we are not truly free, and instead we become the child-like charges of those who Know Better.

Secondly, the right to protest is very important, too, as an enactment of freedom of speech. Students must have the right to rage against politicians who turn up to campus. What they should not do, however, is heckle those politicians, or any other speaker, into silence. That’s when protest crosses the line into informal censorship. Perhaps students could agree that they will protest against visiting speakers on any part of campus they like except the room in which they are speaking – in there, they should ask questions, make points, criticise, rather than protest, out of respect for the free-speech rights of both the speaker and the audience who have come to hear and engage with him. And respect for themselves, too, and their ability to defeat their foe in debate.

And thirdly, the Safe Space is a ridiculous, infantilising, intolerant realm that must be dismantled. Let’s be clear about why those protesters thought it was okay – good, in fact – to use menace to try to shut down Rees-Mogg. It is for the same reason that anti-Israel students scream until pro-Israel campus events are shut down, or student activists fume against statues that offend them, or campus radicals police even everyday conversation, which they now think of as ‘microaggression’ – because this new generation has been brought up to think words are a form of violence, and thus it must be legitimate to use violence, or something like it, to prevent those words from being expressed.

The more we treat ideas and speech as violence, the more we sanction violence to deal with them. The more we sanctify individuals’ self-esteem, the more we create an army of sensitive, intolerant youths who will do anything to guard themselves against words – or ‘assault’, as they see it. Well, wouldn’t you? If you thought the phrase ‘Trans women are not women’ was akin to being punched in the face, wouldn’t you rail against it, too, and seek to crush it?

This is the danger of eliding words with assault: we nurture a new, unforgiving censorship, one which thinks nothing of using rage and threats and even force to shut down words. Challenging this culture on campus will require more than calling students ‘snowflakes’ – it demands that we dismantle the entire 21st-century therapeutic culture that socialises the young to think of themselves as fragile and of other people’s ideas as a threat to be destroyed rather than principles to be engaged with.