My enthusiasm is curbed

The ninth season of Larry David’s show is shaping up to be disappointing. 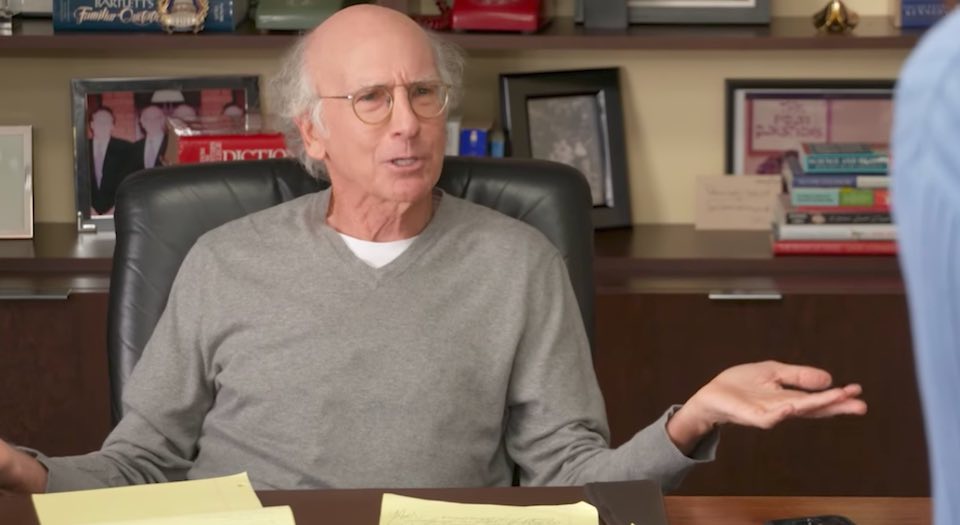 ‘He Left. He Did Nothing. He Returned.’ So reads the tagline for the ninth season of Curb Your Enthusiasm, returning to HBO after a six-year hiatus.

The show stars its creator Larry David as a fictionalised version of himself, devoid of empathy and constantly rubbing people up the wrong way. Like his real-life self, the Larry David of Curb is the multi-millionaire co-creator of Seinfeld (he’s allegedly worth $900million). Unlike the protagonists of just about every other sitcom ever made, he has absolutely no material concerns whatsoever, and Curb portrays the petty annoyances of someone who has absolutely nothing to worry about.

The show, famously, has no script. David writes a highly detailed outline of what must happen in each scene and the actors then improvise the dialogue during filming. The show also uses simple digital cinematography, and no live audience. This approach was novel when the show started back in 2000, but has become the standard for acclaimed TV comedy since.

Curb was never that regular; it always took random years off. But the latest six-year break has been the longest. Perhaps the hiatus was a good decision: the eighth season had tell-tale signs of a franchise losing steam. David’s wife on the show, played by Cheryl Hines, was dumped – a decision presumably inspired by David’s real-life divorce from Laurie Lennard. In the process, the show lost its straight man, to balance out the more over-the-top characters. That season also lacked the fantastic arcs that usually define the show – instead, the cast took a trip to New York for no particular reason. Tellingly, David had assistance in writing the episodes for the first time ever.

Still, there was a lot of excitement around the new season, as fans feared the last season was the show’s last. David has sworn off ever announcing a firm end-date for the show, due to the overwhelmingly negative response to the series finale of Seinfeld, which he wrote. Titled simply ‘The Finale’, it was watched by a staggering 76.3million people in the US alone, but was hugely disappointing to many. David especially regretted the intense secrecy surrounding the content of the episode prior to its airing.

In many ways, Curb is a spiritual sequel to Seinfeld, which David wrote more episodes of than anyone else. Both shows feature a morally questionable set of characters, complex interweaving plots, and bizarre observational humour. George Costanza, Jerry Seinfeld’s balding, neurotic best friend, was always considered to be a substitute for David. Many of George’s absurd storylines were taken straight out of David’s real life, most notoriously ‘The Contest’ episode. But where George reflected David’s neuroses, the David of Curb is supremely arrogant. And while Seinfeld playfully skirted around taboo subjects, Curb’s home on HBO has meant it has always been a far more foul-mouthed affair.

While it’s true that Curb started the trend for so-called ‘cringe comedy’ in American television, it stands out because the cringe is not played up for the sake of irony or condescension. We do not look down on David’s character like we do on the deluded David Brent or Alan Partridge. His cringe is strangely righteous. He goes out of his way to confront people over the most irrelevant faux pas because of his own strange sense of morality.

The new season mines the past for controversial subject matter, namely the Satanic Verses scandal. In ‘Foisted!’, the season premiere, we find David has written a musical comedy based on the incident entitled ‘Fatwa!’. When he promotes the show on Jimmy Kimmel Live, he insults the Ayatollah, which leads to the actual Ayatollah issuing a fatwa against him. Presumably this will play out as the arc for the rest of the season.

The plot construction of the episode is weak – one event follows another without much consequence. The subplots – about a butch lesbian who wants to be a bride, and a useless PA foisted on to Larry by Jimmy Kimmel – seem particularly uninspired and go absolutely nowhere. In another plotline, David and his best friend, comedian Richard Lewis, make jokes out of each other’s misfortune.

Here’s hoping David’s misfortune in the rest of the season is funnier than this.

Watch the trailer for Curb Your Enthusiasm Season 9: