The war on Brexit is a war on democracy

Let’s get real: the elite hatred for Brexit is a hatred for people power. 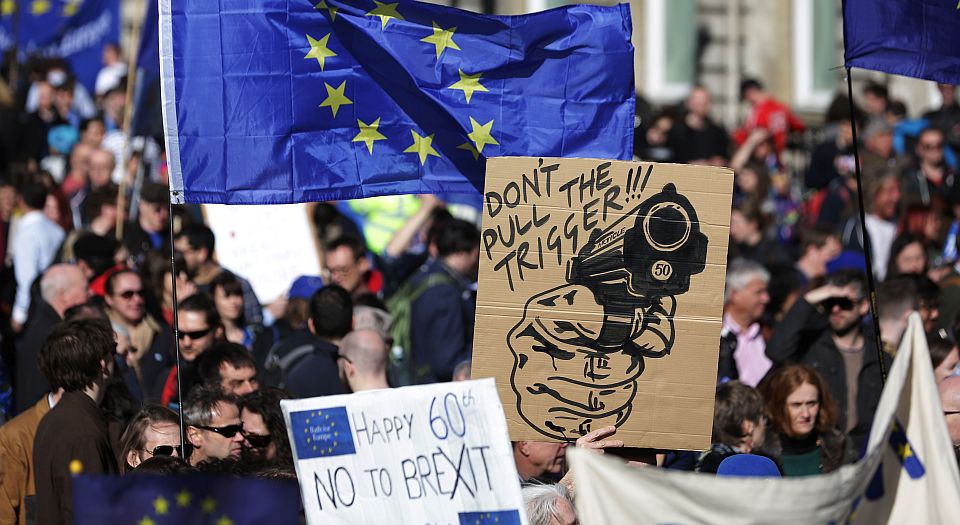 By Remoaners, I don’t mean the 16.1million who voted Remain, the vast majority of whom are not part of any elite, and a huge chunk of whom now accept Brexit must happen. I don’t even mean those sad people who traipse through the streets shouting ‘Brex-shit!’ and who agitate, or at least tweet, for Britain to stay in the EU: the rights to protest and speak are essential to democracy and these people must be free to fulminate for as long as they like against the democratic will. No, I mean those sections of the elite who have sworn their financial, political and institutional clout to the cause of preventing or diluting Brexit. You guys: we’ll stop calling you destroyers of democracy when you stop trying to destroy democracy, cool?

The war on Brexit – which is a war on the largest democratic mandate in British history, on the very right of the masses to decide the fate of their nation – is getting serious. For too long Leavers have had a tendency to chortle at the myriad spittle-producing haters of Brexit in business, politics, the law. But it’s not funny anymore, because they’re in the ascendancy. Not courtesy of democracy; the people have rejected their preference for oligarchy over democracy, for technocracy over debate, for expertise over the public’s opinions and beliefs. No, their rise, their influence, is built on their economic supremacy and behind-closed-doors influence, on the fact that they are wealthier, better connected and – let’s be frank – more ruthless than us, the demos.

The seriousness of this bloodless coup d’etat against Brexit has been perfectly and brutally summed up this week in the elitists’ suggestion that we revoke Article 50. Not content with seeking to wound Brexit – by, for example, suggesting we stay under the jurisdiction of the European Court of Justice, or institute a second referendum even before Brexit has become a reality – now they’re openly calling for the whole thing to be reversed. The Observer revealed on Sunday that, contrary to what some ministers have intimated, Article 50 is revocable. This is all the proof we needed, said a QC in the Guardian, that it is ‘not too late to step back from the Brexit brink’. Translation: the plebs, the unwashed throng, took us to a political cliff edge with their strange, prejudiced passions, and now it falls to the clever, the legally minded, the rational, to put Britain back on course.

The lawyerly revelation that Article 50 can be untriggered has whetted the undemocratic appetite of key Remoaners. Alastair Campbell – who loves democracy so much he helped to kill 100,000 Iraqis in the name of it – cheers the fact that we now know Article 50 ‘can be revoked’, and more importantly we know ‘it should be’. That 17.4million people think it shouldn’t is immaterial. We’re all Iraqis to him. The bigoted newspaper the New European treasures the possibility of overturning Article 50. Its leading columnist, philosopher turned key public fumer against democracy, AC Grayling, recently implored the political class to ‘recover yourselves… salvage the honourable course: stop Brexit’. The ‘honourable’ course, to these people, is the opposite of what the throng wants, as it was for those aristocrats who spent the 1700s and 1800s arguing that expanding the franchise would make politics a less honourable, more unhinged enterprise. Labour MP David Lammy says that if we leave the EU, can the ‘last person to leave please turn out the lights?’. This is the man who says we must listen to the voiceless of Grenfell Tower. Yet when the poor use their voice, as millions did for Brexit, he weeps into his macchiato. The gall of these anti-democrats.

Let’s not beat around the bush here. If Article 50 is revoked, Britain will cease to be a democracy. It will be the clearest, rudest indication yet that the great democratic era, the hard-struggled-for principle that the people should steer the nation, is unravelling. The revocation of Article 50 can be dolled up as a legal tweak, or as a stalling measure, or even as a narrow, expertise-driven exercise in keeping Britain off the ‘cliff edge’; but behind all these euphemisms lurks the foul, old idea that ordinary people cannot be trusted with big political decisions, and the political sphere is best left to the wealthy and well-educated.

It is time we gave these elitist stallers of Brexit their historic due. They are not aberrations. They are not unique to the 21st century. They follow in a long line of warriors against democracy. They are the moral heirs to the Peterloo Massacre in Manchester in 1819 and Black Friday in London in 1910, when aspiring male and female voters respectively were assaulted by the state and demeaned by experts simply for wanting to express themselves at the ballot box. It’s not small fry that the Guardian, in its original incarnation as the Manchester Guardian, was described by the more radical Manchester and Salford Advertiser as ‘the foul prostitute and dirty parasite of the worst portion of the mill-owners’ for, among other things, its hostility to labourers and their request for political influence. It continues in that tradition now with its haughty disgust for the Brexit hordes and its suggestion that Article 50 be overturned.

What was said by the elite agitators against the vote for working-class men and later for women is now said of Brexit voters. The Chartists who demanded suffrage for working men were informed that such people lacked ‘ripened wisdom’ and were ‘more exposed than any other class to the vicious ends of faction’ – that is, to demagoguery. A few decades later, Suffragettes were told that women lacked ‘the expertise in naval, military, commercial, diplomatic and legal matters which is necessary for informed political activity’. Both of these prejudices – the idea that plebs fall for demagogues and are too stupid for politics – are writ large in the anti-Brexit agitation of elite Remoaners. Dark, ugly anti-democracy has come back to life.

What we are faced with today is not just a new or novel spat over a particular vote on the European Union; it is a resuscitation of the centuries-old battle between democrats and anti-democrats; between those who trust ordinary people and those who fear them. This is the historic narrative into which the elite hysteria over Brexit must be moved: one in which democracy itself is under attack, from on high, as it has been so many times over the centuries. Those of us who believe in democracy must defend Brexit with all our might, for it is the new battleground in the age-old question of whether politics should be done only by Them or also by Us.