Pride comes after the fall

The capitalist spectacle of Pride is the death cry of radical politics. 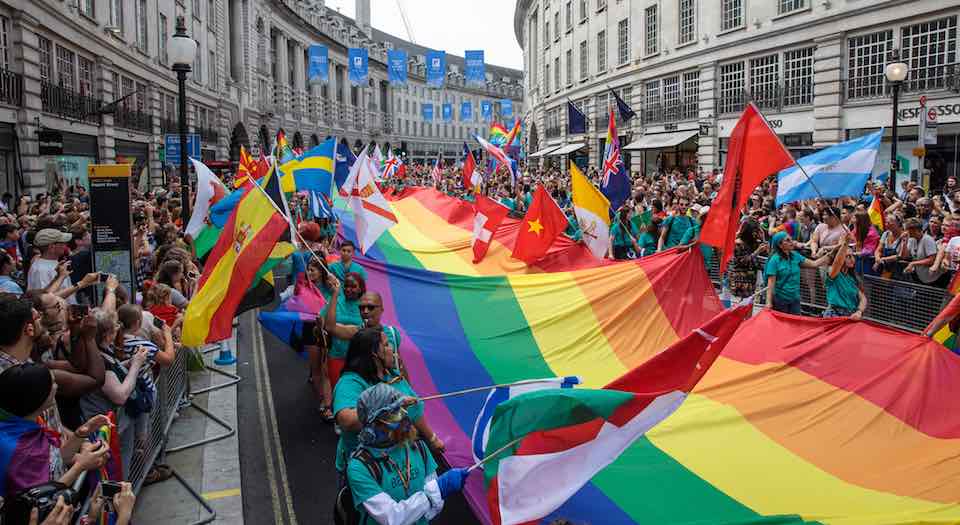 You couldn’t have asked for a better, more hi-res snapshot of the state of supposedly radical politics. It was last Saturday, the sun was out, and two very different political gatherings were taking place. In the North, there was the annual Durham Miners’ Gala, which has been going since 1871. Former miners, brass bands, trade unionists and working-class families gathered to celebrate — or more accurately, commemorate — the labour movement and its many achievements. In London, at the same time, Pride was sprawling through the streets. Gay-rights activists and their ‘allies’ gathered to celebrate themselves. In an orgy of colour and noise, they advertised not so much their achievements as their characteristics; not their work, but their play; not what they do — which won’t be digging for coal — but who they are. The difference between Durham and Pride tells us an incredibly important story about the fall of radical politics.

Pride is an increasingly bizarre spectacle of self-regard. It started life, in 1972, as a very positive cry for gay liberation. It was a gathering of gay men and lesbians demanding greater autonomy and the dismantling of laws that still punished certain forms of gay sex even following the partial decriminalisation of homosexuality in 1967. But in recent years it has become more about identity than autonomy; more a therapeutic demand for validation than a political cry for liberation; more an exercise in collective narcissism than collective agitation. And it’s one the bourgeoisie has completely fallen in love with. This year’s Pride was awash with capitalist cash. Sponsors included Barclays, PricewaterhouseCoopers, Starbucks, Tesco, Virgin, Vodafone and NBC Universal. Corporations fall over each other to pump the money they make on the backs of the working class into this gathering of largely middle-class identitarians. The same capitalist class that contributed to the crushing of the mining industry in places like Durham now throws its filthy lucre at Pride in London.

Some older gay-rights activists, including the legendary Peter Tatchell, have criticised the corporatisation of Pride. This year Tatchell complained that ‘the ideals of LGBT equality are barely visible’ anymore, and instead we have a party-like event that ‘big corporations see as a PR opportunity to fete LGBT consumers’. But these criticisms miss the mark somewhat. It’s not that Pride has been hijacked by big business keen to tap into the Pink Pound. It’s that in playing a key role in institutionalising the politics of self-regard, in assisting with the shifting of the radical political focus from the economy to identity, from questions of power to issues of esteem, Pride lends itself beautifully to the reorganisation of 21st-century capitalist society in a way that benefits those in power. Pride and its participants haven’t simply become the targets of capitalism; Pride is capitalism. Pride is the new face of capitalism, a glossy, pink manifestation of a new bourgeois ideology that seeks to pacify the populous through depoliticising the economy and politicising lifestyle and culture.

The differences between something like the Durham Miners’ Gala and Pride are instructive here. Sadly, the annual Durham event looks increasingly like a museum piece, almost an historical re-enactment of struggles that simply do not take place today. There are no coalminers in Durham any more. There are no deep coal mines left in Britain, in fact. The last one, in Kellingley in North Yorkshire, closed in 2015. As to the trade unionism the Durham gathering celebrates, that, too, is on its way out. Last month, new figures showed that trade-union membership has fallen to an ‘all-time low’ in Britain. Last year alone, unions shed 275,000 members. In 2016, just 81,000 workers took strike action, the lowest number since records began in 1893. However, what the Durham gala marks, what it looks back on, is important: that old demand by working people for greater power over their lives, for changes to the political and economic system for the benefit of those who labour for a living. Their call was for control and change. And their activism from the 1870s onwards helped to make life in Britain better than it otherwise would have been.

Contrast this with Pride — or with any of the other identity-based movements, or pseudo-movements, of the 21st-century, whether it’s trans activism, ‘SJWs’ on campus, the new media feminism, or the rise of a victim-orientated politics of black identity. These new groups do not seek power, but pity. They do not challenge officialdom so much as demand its recognition, insist that it validate their minority status and acknowledge their allegedly fragile existential state. Rather than seeking autonomy from the state or the free market, they agitate for the approval of these institutions. So new media feminists get incredibly excited over corporate advertising campaigns that recognise the importance of giving girls a leg-up, and trans activists continually demand that the state more closely monitor and punish expressions of ‘transphobia’ (which are often just media criticisms of the politics of transgenderism). These are movements for dependence — on state validation, on free-market flattery, on the protections offered by censorship — not independence.

The politics of identity doesn’t challenge oppression but rather commodifies it. It makes it into a must-have. Oppression is no longer a state of being that must be overthrown but rather is a condition people envy and desire. As the American political theorist Wendy Brown says, the victim sensibility is now a highly prized asset, or commodity, in late capitalist society. To such an extent that this new victim-oriented identity politics doesn’t seek to overcome ‘pain’ but rather welcomes it (or invents it). ‘Politicised identity… makes claims for itself only by entrenching, restating, dramatising and inscribing its pain in politics; it can hold out no future — for itself or others — that triumphs over this pain’, writes Brown. A perverse consequence of this pain-maintaining identity politics is that it ‘naturalises capitalism’, says Brown, and in fact becomes reliant on what she refers to as capitalism’s ‘wounded attachments’. So identity politics is explicitly anti-change, even anti-progress, because to overhaul those aspects of capitalist society that put pressure on certain groups would mean robbing those groups of the pain that they continually restate and dramatise, and through which they garner moral authority in the therapeutic era. Bizarrely, oppression must now be preserved — or sought out, even where it does not exist — rather than defeated.

This is why the capitalist class loves the politics of identity. This is why it loves Pride. Because not only do these things pose no challenge whatsoever to the economic or political status quo — they are actually deeply devoted to the maintenance of the status quo. The capitalist elite is more than happy to support the annual demonstration of self-regard and dramatised oppression that is Pride because flattering this new, pseudo-leftish politics of victimhood is a small price to pay for the new order in which questions of class, wealth and power have been utterly demoted by politicised identity. And so we reach the perverse situation where the identity politics of middle-class progressives is funded by capitalists who continue to exploit the working class. They recognise that the key dynamic of the politics of identity is its decommissioning — or rather its superseding — of a politics that they found genuinely disturbing and dangerous: class politics. That old politics which the Durham gala remembers.

This is the key difference between the old and new radical politics: the question of transcendence. In the past, the more radical left, at least, was concerned not with celebrating or even maintaining the working-class identity but rather with ending it. This was a way of life that could be overcome through the radical transformation of society. The new identitarian left has no such vision of transcendence and instead devotes itself to managing relations and speech between individuals and groups so that no one’s wounds are ever made worse than they need to be. Far from Corbynism representing a challenge to this politics of identity, and a resuscitation of the old labourist outlook, we may soon find that it will in fact add the final touch to the historic decommissioning of class through its treatment of the working class itself as just another identity group whose wounds must be tended to — by the welfare state, by therapeutic intervention, by institutionalised recognition of their ‘vulnerablity’. And this will be a final victory, for the time being at least, for a capitalist class delighted that questions of power have been replaced by a new elitist imperative of managing social- and self-esteem.