It’s government crackdowns we should worry about, not Spiceheads. 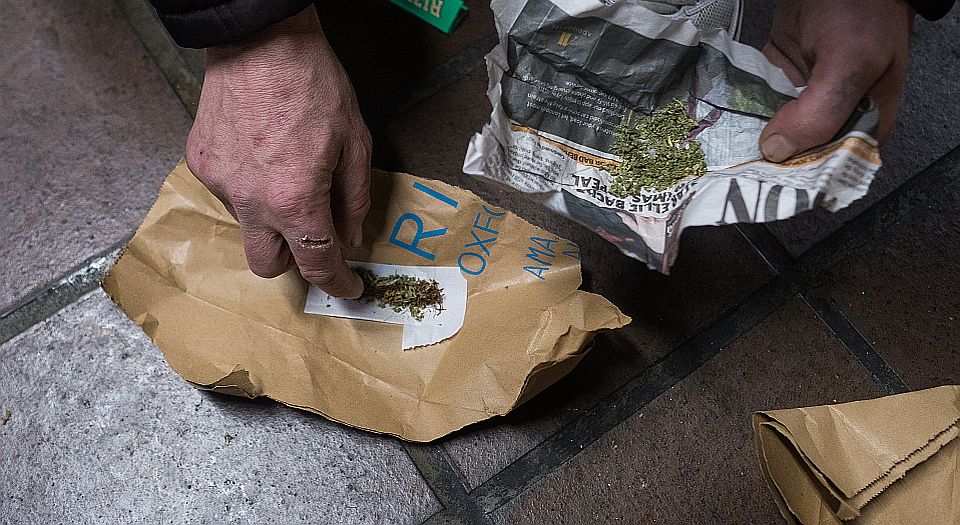 A moral panic is emerging over the synthetic drug Spice. Manchester’s police chief says the spread of Spice is straining emergency services, following a weekend of 58 Spice-related incidents attended by police in the city centre. This is just the latest in a growing chorus of claims that we’re in the middle of a national ‘Spice epidemic’.

‘“Zombie” Spice users are pushing Britain’s emergency services to the brink’, warns the Sun. According to the Mirror, the ‘Spice nightmare’ is turning our city centres into ‘real-life horror movies’. The Daily Mail says Spice ‘turns users into the “living dead” in minutes and is ruining lives across Britain’.

Panicked headlines are accompanied by viral videos of ‘Spice zombies’ appearing to be ‘frozen in time’. Secret filming by BBC’s Panorama shows a prison guard passing out from accidentally inhaling Spice smoke. There’s even a 13-year-old schoolboy in Lincolnshire who claims to smoke the drug every day until he passes out. The plot of this B-movie horror thickens when we learn of Spice’s inventor, John Huffman. Spice’s Dr Frankenstein is an ‘innocent scientist’ who, the Mirror tells us, ‘never intended to turn people into zombies’: ‘His work was only ever designed to do good.’

As Stanley Cohen reminds us in his classic study Folk Devils and Moral Panics, ‘panics about psychoactive drugs have been remarkably consistent for something like a hundred years’. New drugs create new panics, regardless of their intrinsic properties. Every drug panic involves stories of unscrupulous dealers and vulnerable users, while the limited context in which the drugs are taken is ignored in favour of presenting a nationwide menace. This danger to the moral order is then used to justify ever-harsher punishments, ever more restrictions, and ever less freedom.

Government minister Sarah Newton chillingly responded to the Spice scandal by saying drugs ‘will not be tolerated in this country’. She has used the Spice panic to justify the prohibitionist, authoritarian Psychoactive Substances Act 2016, which banned so-called ‘legal highs’ — like Spice. The ‘Spice zombie’ metaphor gaining traction in the press not only describes the catatonic state of its users, but also captures the logic of its prohibition: the fear that if substances are unregulated, they will spread unchecked through the zombie-like masses who apparently lack the slightest capacity to resist pushers or peer pressure. Thanks to the Psychoactive Substances Act, our liberty and the longstanding principle that our actions are legal until made illegal have gone up in smoke.

The alarming figures produced by Manchester police illustrate the self-reinforcing logic of prohibition. The scores of arrests are only possible thanks to the 2016 Act. They are not a snapshot of a normal weekend, but rather are the product of a one-off 48-hour dispersal order on the city centre which involved special patrols pursuing a crackdown on Spice users. This order came alongside Operation Mandera, a longer running campaign against drug-taking in Manchester. Thus, the moral panic is inflamed not only by the drug itself, but in the enforcement of the law against it. The law’s struggles to contain an act which would otherwise be legal is seen as evidence that the act itself is out of control.

When it comes to Spice, Harry Shapiro, director of DrugWise, told BBC’s Newsnight that there are no signs of it gaining in popularity beyond its current user-base of the homeless and prisoners. Indeed, it’s difficult to see the appeal of Spice to mainstream casual drug-users, given its much publicised zombifying effects. An experienced drug worker is quoted in DrugWise’s latest report as saying: ‘Spice has a bad rap among users now, it’s seen as shit. Spice has done our job for us — it’s so bad it’s starting to put users off.’

The vast majority of drug-users harm neither themselves nor those around them. And whether it’s ecstasy, ketamine or Spice, we should trust people to smoke, snort or swallow what they please. ‘Spice zombies’ may remind us of a low-budget horror movie, but drug panics and government crackdowns on our freedom are truly dystopian.