The EU is no friend of the Irish

Ireland's interests lie with links to Britain not Brussels. 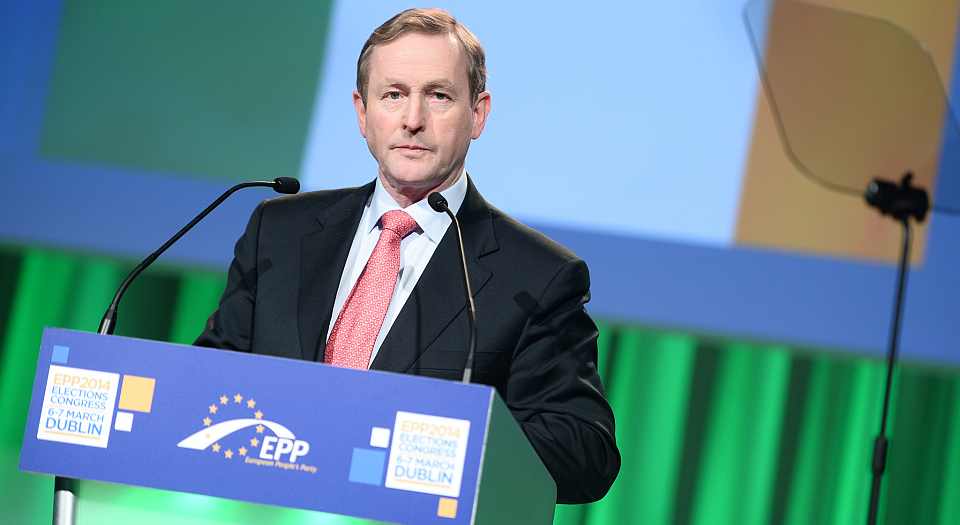 In what may prove to be his final major policy statement, Taoiseach Enda Kenny spelled out the economic and political challenges posed by Brexit in two keynote speeches in Dublin last week. Yet the problems Ireland faces did not suddenly arise on the morning of the 24 June 2016. Rather, they are the product of long-standing historical tensions.

The turbulent years leading to partition and the foundation of the 26-county Irish state, first as the Irish Free State in 1922 and later, in 1949, as the Republic of Ireland, were as much a period of internal class struggle as anti-imperialist or nationalist revolt. The partition of Ireland kept the markets of the British Empire open to northern manufacturers and granted the southern business class a degree of political autonomy, while ushering in a long period of social and economic stagnation that would exact a heavy price on working-class people on both sides of the border. While the northern regime largely operated through a system of coercion and discrimination against its Catholic minority, the southern state was much more successful in constructing a cohesive, if narrowly defined, national project. Similarly, while the six counties had to be kept afloat by regular financial bailouts, backed up by Britain’s military muscle, the southern state achieved a respectable degree of independence, social stability and limited economic growth.

A certain touchiness about the gap between Ireland’s economic subordination to Britain and its ambition to fulfil its destiny as an independent nation state has often coloured policy decisions in Dublin. Thus, when membership of the European Economic Community (EEC) became an option in the early 1960s, Irish political leaders asked themselves whether ‘some diminution of our present sovereignty’ was a price worth paying for the ‘long-term political aim of reduced dependence on the British market’. Similarly, by re-positioning Ireland as a global player, the goal of national unity could be pursued apart from the dangerous and disorderly politics of resisting British rule – that is, on the stage of international diplomacy.

Ireland’s use of the EU

‘A central function of the European Union has always been understood as delivering policies that domestic political systems would be unable to deliver for themselves. Trade barriers were removed, competition was introduced, subsidies for businesses were reduced, regulations liberalised via the EU in ways that would never have been voted for had they been proposed domestically.’ In The European Union and the End of Politics, James Heartfield takes this ‘remarkably candid’ statement from the European Economics think-tank as a starting point for understanding the dynamics of decisionmaking and the exercise of power in the EU. By using EU authorisation as a spur for driving their own national political projects, governments obscure the location of power.

In his Mansion House speech, Kenny was at pains to point out that in the forthcoming divorce between the EU and the UK, Ireland would be sitting firmly on the EU side of the table. However, from Ireland’s perspective, the worst possible outcome of the EU-UK break up would be for Britain to suffer punitive tariffs and other barriers to trade. Exports of Irish goods and services to the UK currently amount to 17 per cent of total GDP, with Ireland’s agri-food sector selling 41 per cent of its products to British and Northern Irish markets. Irish businesses are already losing millions of euros as a result of the depreciation of sterling, with border areas very badly hit.

Giving Britain a rough ride pour encourager les autres might help suppress further rumblings of continental revolt against the EU, but it would inflict collateral damage on the Irish economy far in excess of that inflicted on any other single member state. With annual cross-border trade estimated at about £65 billion, it is no surprise that the UK has expressed a firm commitment towards upholding frictionless borders. The commitment to maintain free movement between Ireland, Northern Ireland and Britain is based on powerful historical precedents – free-trade agreements, guarantees of freedom of movement and special rights and privileges – which predate either state’s membership of the EU. While the Anglo-Irish Free Trade Area may be history, the exemption of Irish citizens from immigration controls that restrict their right to work and settle have long been enshrined in UK law. The same ‘special relationship’ also grants full political rights to resident Irish (and Commonwealth) citizens.

Meanwhile Irish immigration law operates a similarly favourable regime for British citizens, granting them quasi-national status and exemption from immigration controls. Even after Ireland revoked its constitutional claim to the northern six counties, the ‘birthright’ of ‘all the people of Northern Ireland to identify themselves and be accepted as Irish or British, or both, as they may so choose’, alongside the ‘right to hold both British and Irish citizenship’, was upheld in the Good Friday Agreement. These special rights and privileges, which exist over and above the rights of entry and residence enjoyed by EEA/Swiss nationals, are recognised in EU protocols, which also permit the two states to continue making their own arrangements relating to movement within the Common Travel Area.

In subordinating Ireland’s national interests to the interests of EU member states, Kenny places the primary interests of Irish citizens at risk. While the weakness of Ireland’s economy clearly limits its negotiating power, further diminution of national sovereignty is not the answer. As Taoiseach during the 2011-2016 coalition, Kenny led Ireland through the disaster that followed the 2008 banking crisis, including its loss of economic sovereignty in the IMF / EU bailout. Kenny has not been shy of taking the credit for ‘pulling the country back from the economic cliff edge’. But whatever his standing among Ireland’s international creditors, Kenny’s ‘stability programme’ of low wages, insecure employment and public-spending cuts, is hurting the very people – Ireland’s low to middle earners – who paid for the profligacy of international bankers with their homes, jobs and pensions.

While playing down references to bilateral deals between the UK and Ireland, Kenny’s speech made much of the EU’s responsibility to honour the Northern Ireland peace agreement. While it is true that the EU has played a role in underwriting the peace process, to argue that the appearance of customs posts along the border would bring political violence back to the streets of Northern Ireland remains wide of the mark. Since the dismantling of the old military watchtowers, the border no longer acts as a barrier to movement for the majority of Irish, British and European citizens.

The Good Friday Agreement not only initiated the process for removing army watchtowers, checkpoints and paramilitary threats, it also strengthened Anglo-Irish cooperation on the issue of border policing. Joint operations at the land border and at ports of entry became commonplace throughout the 2000s, often reflecting media campaigns and public disquiet around ‘bogus asylum seekers’ and illegal immigrants using the border as a ‘backdoor’ between Ireland and the UK. Police forces from Scotland, Northern Ireland, Britain and Ireland routinely carry out checks on domestic flights and ferries in and out of Ireland and across the land border, with the focus on intercepting those they want to keep out – that is, those who are young, male, dark-skinned and Muslim.

Explanations for the durability of the Common Travel Area often cite the practical difficulties of policing the north-south border as an immigration frontier. However, it seems more likely that the reciprocal rights enjoyed by Irish and UK citizens reflect the reality of patterns of working and living, and the longstanding social ties that bind the people of London, Belfast, Dublin, Tyneside, Liverpool, Cork, Glasgow and all the towns, cities and regions of these islands. Are these authentic ties now to be broken? And in the name of a system that measures the value of human relationships only in terms of free movement of capital and commodities? While politicians talk themselves into a corner, British and Irish people should stand up for the Common Travel Area. Not simply in defence of their ‘birthright’, but as the starting point for building a wider conception of human solidarity that embraces all people who choose to settle and make a life together, regardless of race, religion or cultural difference.

‘They may not have known it’, wrote Fintan O’Toole in 1991, in an article marking the 75th anniversary of the Easter Rising, ‘but what the men and women of 1916 fought for was an Irish seat at the European table’. This view reflects a confusion between the narrow interests of the state and the common interests of the people and the nation. Perhaps the Democratic Programme of the First Dail represents the intentions of Ireland’s revolutionary generation more truly: ‘We affirm the duty of every man and woman to give allegiance and service to the Commonwealth, and declare it is the duty of the Nation to assure that every citizen shall have opportunities to spend his or her strength and faculties in the service of the people. In return for willing service, we, in the name of the Republic, declare the right of every citizen to an adequate share of the produce of the Nation’s labour.’