Life on the Road is Ricky Gervais’s last stab at the mainstream. 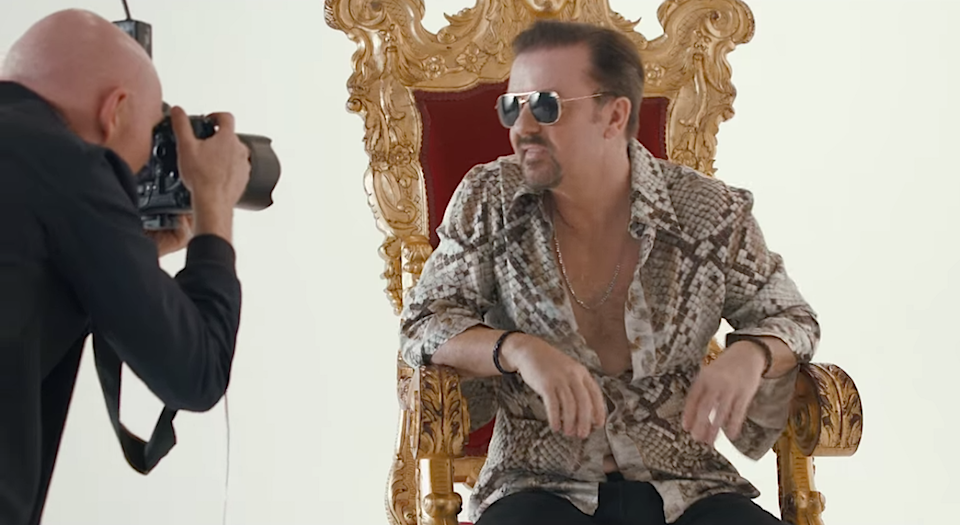 Thirteen years on from The Office’s finale, David Brent returns in a feature-length film, David Brent: Life on the Road. The set up for Brent’s big-screen debut is that our hapless hero has decided to use his pension to fund a tour for his band, Foregone Conclusion.

Where we find Brent in Life on the Road has some parallels with where Gervais himself is at this point in his career. In a way, this is also Gervais’s last chance to return to the mainstream. Having not starred in a major film or acclaimed TV show in many years, the fact that Gervais has decided to bring back Brent whiffs somewhat of desperation.

The finale of Gervais’s last show, Derek, was watched by less than a million people. He is by far the most popular host of the Golden Globes – but who wants that dubious honour? Gervais was once proud to say that he ended The Office after just 14 episodes, and refused to milk it for all it was worth. Now he’s cashing in on his creation in an attempt to save his career.

But this is no Office reunion. There’s no Tim, no Dawn, no Gareth, and, perhaps most importantly, no Stephen Merchant to co-write and direct. There’s also none of the sort of celebrity cameos we saw in Extras or Life’s Too Short. In a similar vein to The Office Christmas special, Life on the Road focuses on Brent’s loneliness, his life outside of work and his attempts to exploit the meagre fame, or infamy, he earned through that ‘documentary’ called The Office. The conceit is that Life on the Road is a follow-up documentary about him, which he uses as an opportunity to get the band back together and have one last shot at a record deal.

The film maintains the awkward humour of The Office, but is devoid of the acute observations that made the show so relatable. The film starts in another office, a company Brent now works for, where just about every character is a carbon copy of the characters from the series. You could say that the original characters were just perfect office archetypes – that Gervais couldn’t help but replicate them. But, considering they’re barely onscreen here for more than a few minutes, they look and feel like cheap rip-offs.

In contrast to the depth of the characterisation in the original series, Gervais has become obsessed with stereotypes. Brent often got himself into uncomfortable situations when trying to relate to, say, black or disabled people. But he was always the half-PC, half-prejudiced idiot, surrounded by normal, fleshed-out people. Since Extras, Gervais has written characters whose sole purpose in a scene is to be ‘the black guy’ or ‘the disabled woman’, there for the protagonist to bounce their awkwardness off of. Here such scenes are responsible for a large part of the humour.

Since Gervais first became famous with The Office, he has been obsessed, unsurprisingly, with fame – and this has been reflected in his later work. In the Christmas special, Brent is chasing fame. Andy Millman, the everyman of Extras, is pathologically obsessed with it. And the name of Gervais’s third stand-up tour was, of course, Fame. It is this obsession that has given his later work a self-indulgent streak, pushing him towards self-parody.

The Office felt grounded in reality, mainly due to the presence of Tim, the real hero of the show who balanced out Brent’s outrageousness. That’s what Life on the Road is sorely lacking. It’s absurd that Dom Johnson (Doc Brown), a twentysomething rap artist Brent manages, would stick around given the way Brent treats him. The role of the band members, meanwhile, seems to be turning to the camera to say how annoying and talentless Brent is – something the original Office cast could do with little more than a stony look.

The Office and Extras had immense pathos to them – they tapped into the banality of everyday life. But Gervais has also always had a sentimental streak. All of his shows have happy endings, and Life on the Road is no exception. But, previously, these were muted – they were small wins. At the end of The Office, Brent’s happy ending is the possibility of a second date with a woman. The ending here, however, is far too sugary.

Life on the Road is consistently amusing, and the songs are catchy and well-produced. But this warm nostalgia trip cuts against the spirit of the iconic show that spawned it.

Watch the trailer for David Brent: Life On The Road: