And the award for the safest, lamest comic goes to…

Will Franken reveals the winners of the first-ever Defining the Norm Awards. 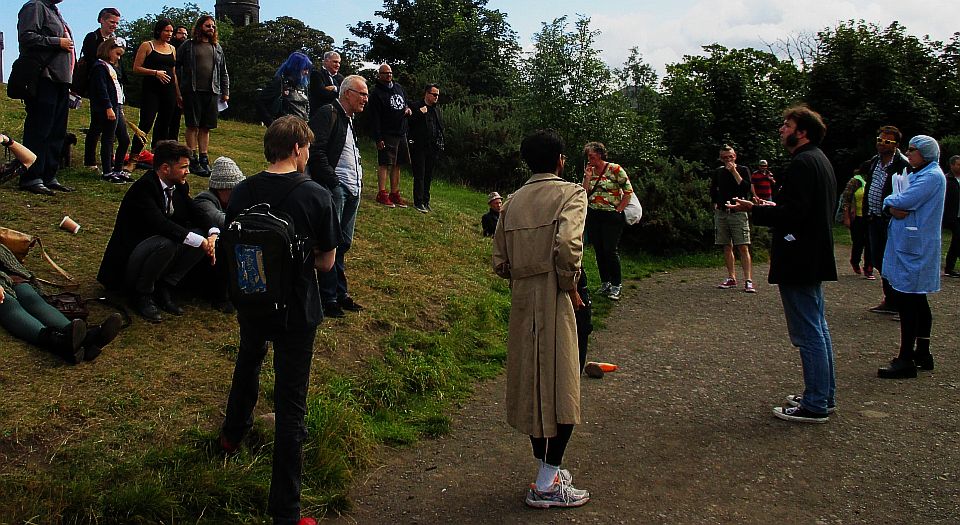 Physically we were few, but spiritually we were strong – those of us who braved the early morning hours of 28 August, scaling the steep and winding steps, defying tidal waves of social-media vitriol, to reach the top of Calton Hill in Edinburgh. We were gathered for the presentation of the inaugural Defining the Norm Awards, a celebration of comedy conformity at the 2016 Edinburgh Fringe, where I led the austere, liturgical ceremony.

What became immediately apparent when I, the Reverend Wm. Franken – along with Archdeacon Scott Ambrose and choir director Cathy Hughes – arrived at Bus Stop ZG, across the road from Calton Hill, was a stunning lack of opposition. The online throngs who had threatened to show up out of spite were either sleeping off angry hangovers or had frittered away the time needed to prepare an original retort to a celebration of unoriginality.

Instead, we were greeted at the base of the hill by a modest gathering that included the most heretical free-speech figure at this year’s Fringe, Mike Ward, the comedian being sued by his own government for the barbaric crime of telling a joke. Mike in turn was joined by some French-Canadian photographers, there to document his part in this sombre ceremony many other comedians had for days been decrying as – sacre bleu! — a scandal! Another notable appearance was that of Miss Samantha Pressdee, one of five nominees for the coveted I Am a Woman Award. In fact, Pressdee was the only nominee in any category to appear, leaving me to wonder if the majority of the comedy collective had suddenly discovered the virtue of humility.

In time, we were joined by fellow comedians-cum-awards presenters Andy Zapp, Bob Walsh and Lewis Schaffer — the latter having recently pivoted on his admonition that I refrain from presenting the awards, lest I lose many friends I never even had. Shortly thereafter, we were met by singer-songwriter Michelle Shocked, eagerly anticipating her presentation of the I Am a Woman Award.

When the crowd had numbered around 20, the choir director distributed hymn sheets and we made our way up the hill, singing en masse those beloved odes to safe comedy ‘All Things Bland and Done Before’ and ‘Amazing Crap’.

We arrived, slightly out-of-breath, at a pleasant field of green grass that sloped downwards to join the quaint gravel pathway in front of the austere monument to Scottish enlightenment philosopher Dugald Stewart. There, we met another crowd of 20, which included such comedic luminaries as acerbic Trevor Lock, loose cannon Craig Campbell, and Fringe legend Simon Munnery. This happy union doubled our numbers to roughly 40 congregants.

Once assembled, the choir director led the parishioners through the processional hymn ‘Our Souls Are Broken’. Following which, I – as vicar – approached the monument and intoned the sacred blessing:

In the name of blandness, safety and political correctness.

The introductory call-and-response rites were then undertaken as both priest and congregation asked forgiveness from the Almighty Ordinary for the sins of originality and experimentation. You were sent to heal the world of free speech, Blandness have mercy. You were sent to reward the mundane. Safety have mercy. May the Almighty Ordinary have mercy on us, forgive us our controversy, and bring us to everlasting boredom.

A series of 20 awards were then presented by various individuals, including two German tourists who kindly stepped in to fill last-minute vacancies left by fear-ridden, change-of-heart dropouts such as Leo Kearse of the raunchy, take-no-prisoners Hate-n-Live shock show. The awards themselves – the front page of this year’s Fringe brochure with the word ‘defying’ scratched out and the word ‘defining’ written above – were dispensed in two instalments of 10, separated by the beautifully sung responsorial psalm ‘The Sheep Are My Shepherds, I Shall Not Think’. Particular highlights were Samantha Pressdee exposing her lovely breasts with giggling glee upon receiving the I Am a Woman Award, and Lewis Schaffer veering off-script to beg atonement for his initial reluctance to support the DTNs.

During the homily, I myself presented the final two awards, Best Newcomer and The Grand Bland, to Stewart Lee and Sofie Hagen, respectively, before ruminating on the chosen theme of ‘Freedom from Originality’. Thereupon, the collection plate was passed around as all sang ‘How Safe Thou Art’ and prepared for the Eucharistic non-mystery, wherein bread is not transformed into the Body of Christ but simply remains bread. All congregants, save for the gluten-free, came forward for a blessing and a bite, and, following the benediction, were dispersed with the recessional hymn, ‘O Go, All Ye Brainwashed’.

In all, it had been a lovely, peaceful celebration of sterility. Looking back even now, I am struck by the irony that such a motley band of free-thinking misfits, weirdos, rebels and free-speech advocates should be the ones finally to give comedic safety and blandness the religious reverence it has so long deserved.

Will Franken is a London-based comedian.