Cameron was Blair with a blue rosette. 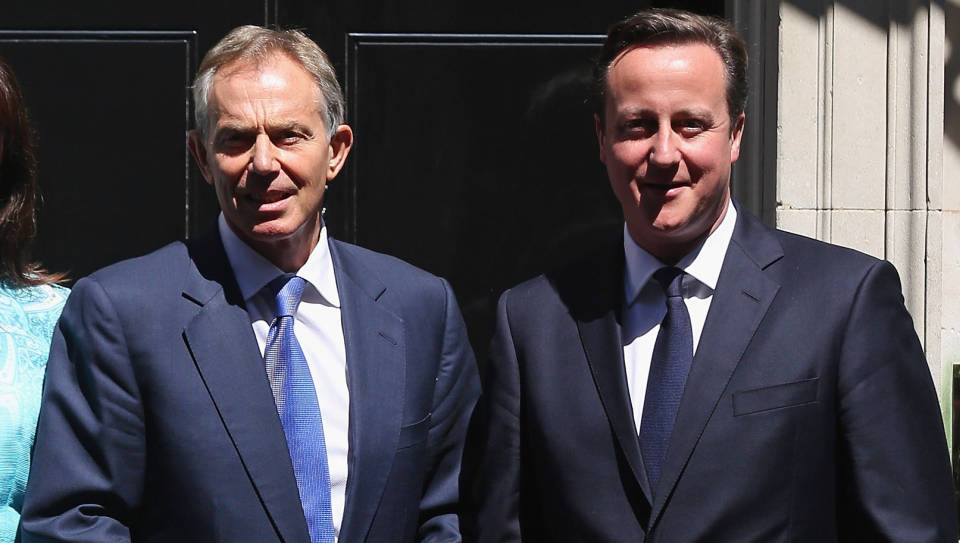 Over the past few days, Britain’s recently departed prime minister, David Cameron, has been troubling political hacks. They try to sum up his legacy, draw out a meaningful narrative from his six years at the top, capture what it is that Cameron means. Or rather, meant. But he’s an elusive one, a will-o’-the-wisp of a politician, his vision uncertain and his policies all too often bent into u-turns.

Not that Cameron’s effortless blandness has stopped political pundits from attempting to locate something distinctly Cameroonian. Supportive commentators talk vaguely of modernisation, or of relative economic stability, or of his chilled-out demeanour. His detractors, mainly on the putative left, retreat into clichés about Cameron destroying the NHS, hurting the vulnerable, and his blasé inattention to detail. Others talk of his pragmatism, or his opportunism, depending on your perspective. And many point out that he was a prime minister who lived, and died, by referendums – winning two, on electoral reform and Scottish independence, before, of course, losing the Brexit-heralding other.

But Cameron’s strangely faceless time in office speaks to something deeper than his own individual brand of non-stick PR-cum-politics; it speaks to the uniformity of the political class itself. It speaks to its shared outlook, its common policymaking trajectory, its interchangeable cast of unremarkables. That’s why Cameron’s time in office is so lacking in distinction. He was Tony Blair with a blue rosette: his Tory governments, albeit largely (and tellingly) in coalition, were continuations of their New Labour predecessors. What really marks Cameron out is precisely the extent to which he, and the modernised, de-toxified, de-traditionalised Conservative Party as a whole, didn’t stand out – that is, the extent to which they continued the small, shrunken politics of the New Labour years, continued the long, drawn-out political retreat from arguments over socioeconomic issues, and continued the focus on the politics of behaviour, of ever earlier interventions into family life, of policies aimed at changing the way we eat or drink. As it was with New Labour, so, too, with Cameron’s New Tories: there was no social problem or economic challenge too big that it couldn’t be reduced to a problem of individual attitudes or lifestyle, be it tax-dodging rich folk, or vulnerable, incapable poor folk.

Even Cameron’s rhetoric was an echo of New Labour’s. When he talked of ‘broken Britain’, as he did in the run-up to the 2010 General Election, and again, during the London riots in August the following year, he recalled the words of the young Labour shadow home secretary in 1992. Then, in the aftermath of the murder of toddler Jamie Bulger by two children, a young Tony Blair blamed a ‘broken’ society, and called for people to wake its ‘sleeping conscience’. For both Blair and Cameron, societal problems were reconceived as problems of individual behaviour, of moral irresponsibility.

It’s little wonder, given this cross-party focus on individual behaviour, that one of Cameron’s first acts upon becoming prime minister in 2010 was to establish the Behavioural Insight Team, the so-called nudge unit. Its unabashed aim was to ‘influence behaviour through public policy’, on the grounds that ‘people are sometimes seemingly irrational’. Tellingly, it was headed up by David Halpern, a politico who, between 2001 and 2007, had led Blair’s strategy unit – proof, if any were needed, that far less divides today’s political class than unites it. And it is united, above all, in a soft-paternalistic opposition to the public, which it views as a clay-like mass to be moulded and shaped, nudged and nannied, according to policymakers’ vision of correct behaviour.

Indeed, the ideological common ground of the political class has perhaps been nowhere more apparent than in the transformation of wellbeing or happiness from being a free individual’s pursuit into the object of government policy. So committed were New Labour to making people happy that they appointed a so-called happiness tsar, academic Richard Layard, who urged us ‘to change our inner attitudes as much as our outward circumstances’. Likewise, Cameron, from the moment he was elected Tory leader in 2005, repeatedly stated ‘that there’s more to life than money’, and that government should focus ‘not just on GDP but on GWB – general wellbeing’. In office, Cameron continued to focus on wellbeing, even promoting a ‘happiness index’ – to measure just how happy we are.

The cynic might well observe that telling people to smile, and that there’s more to life than money, is far easier than trying to address the structural problems of the economy. But, like Blair before him, Cameron’s commitment to changing people’s minds rather than their circumstances was sincere. For the modern political class, forged in the post-Cold War and, therefore, post-political era, the economic organisation of society has ceased to be a political issue. And parliamentary politics and policymaking has limited itself to behavioural interventions. Like Blair before him, Cameron embraced this apparent political reality. His government’s job was to change our attitudes, make us feel better, more happy – and also to get us to drop the bad habits, to smoke less, drink sensibly and eat healthily.

Indeed, it was a depressing reminder of the glory days of New Labour, when Jamie Oliver bestrode school dinner halls lecturing parents on Turkey Twizzlers, to see the Pukka One once more stood outside parliament in March, this time celebrating what turned out to be chancellor George Osborne’s last budget. Why? Because Osborne, Cameron’s closest ally, had just announced a tax on fizzy drinks. Those looking for something Distinctly Dave about the past six years of government need look no further than Oliver’s smug, punchable face. There, what Cameron ought to be remembered for is writ large: his determined continuation of that which had come before, in all its happiness-indexing, nannying and nudging miserableness.